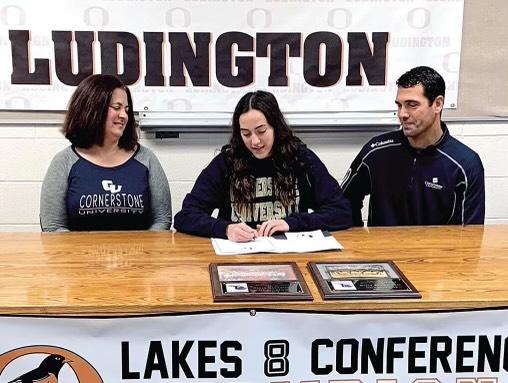 Bandstra signed her letter of intent recently to play for the Golden Eagles.

Cornerstone, which finished 7-21 this past season, is a member of the Wolverine-Hoosier Athletic Conference..

A summer knee injury and surgery prior to her senior season set Bandstra back a bit. She was out of action until December and is still recovering.

She contributed to her team’s success despite the injury that limited her effectiveness on the court.

“We only lost two games after Abi returned, one being our final game against Detroit Edison,” Ludington coach Warren Stowe said.

“Beyond being a talented basketball player, Abi is a tremendous leader and human being,” Stowe said. “Her value as a basketball player far exceeds anything that shows up on a stat sheet and that was evident this year.”

When Bandstra returned from the injury, the caliber of play of the entire team was elevated, Stowe said.

“Few work as hard as Abi on or off the court,” Stowe said. “She’s talented, as I said before, but she also works hard on her game, in the weight room and in the classroom. I am very proud of Abi, I know Cornerstone is getting an amazing player that will help build their program.”

Bandstra, the daughter of Jamie and Tammy Bandstra, plans to major in elementary education. At Ludington, her grade-point-average is 4.079.