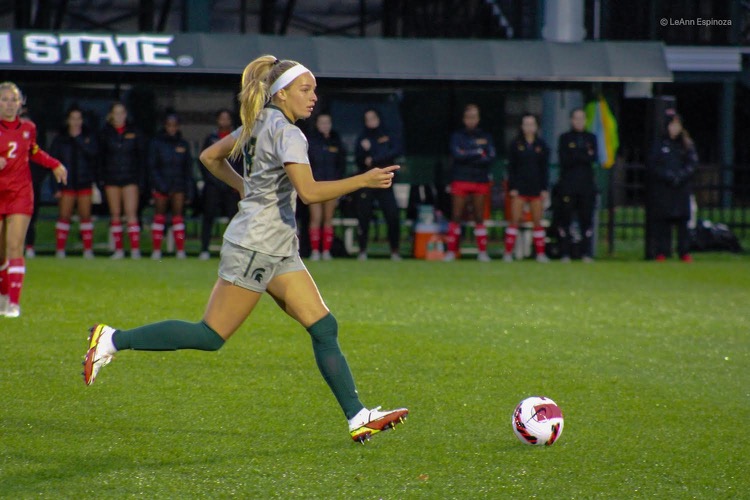 MUSKEGON–Raegen Cox is anxious to see what’s ahead in her collegiate soccer career.

Coming off a solid junior season at Michigan State, the 2019 Mona Shores
graduate is anxious for the upcoming 2022 soccer season to get underway.

The Spartans kick off the season at home on August 6 against Wright State.

Cox played more than 1,000 minutes a year ago. She was one of seven players to start all 17 matches last season.

Cox earned her first career assist on the game-winning goal against Minnesota on September 26. She recorded five shot attempts over five different games and was named to the Top Drawer Soccer National Team of the Week on September 21 as a defender. Cox also recorded career-high
minutes, games played, and games started and was Academic All-Big Ten. 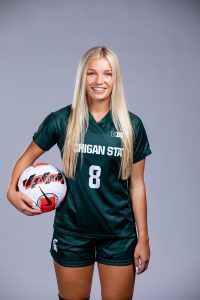 Cox is in the School of Business where she is majoring in Marketing. She also will have a degree in Sports Business Management upon graduation next spring.

The 5-9 senior has a fifth season of eligibility because the NCAA allowed athletes an extra year due to Covid. So, she plans to pursue a Master’s Degree beginning in the fall of 2023.

“My personal goals are simply to do everything I can to help make my team successful and achieve its goals,” said Cox. “We are looking to win the Big 10 this year and make a long run in the NCAA Tournament and extend our season.”

Cox has played outside back or outside midfield during her time at Michigan State since transferring from the University of Arkansas after the 2019 season.

“I have been at MSU for 2 years,” Cox said. “I have had a great experience so far. I have been fortunate to be around great players and coaches who push each other and make each other better every day.”

During her sophomore season, Cox started all 12 games and totaled 1,052 minutes on the field She had four shot attempts. She was Academic All-Big Ten and Big Ten Distinguished Scholar.

Then came the most to Michigan State.

“I committed to the Arkansas Razorbacks when I was a sophomore in high school,” she said. “I went to Arkansas for the 2019 season immediately after winning our second national championship with my club team – Midwest United FC – from Grand Rapids.”

As a freshman, she played in all 23 games. The Razorbacks won the SEC Conference Championship and made it to the second round of the NCAA tournament.

“I transferred to MSU following my first semester/season at Arkansas,” Cox said. “Because of the rules of the transfer portal, I was not required to sit out a year. I was able to start as soon as I got to MSU.”

“Michigan State and Arkansas were the two top schools I was considering going to during my recruitment,” she said. “Although I loved the University of Arkansas and had a great experience there, I found that I preferred to be closer to home, family and friends and the many things that I loved about Michigan.

“The coaches at Michigan State and I knew each other well from my recruitment and we had developed a very good relationship,” she said. “I transferred to Michigan State between semesters and it has been great.” 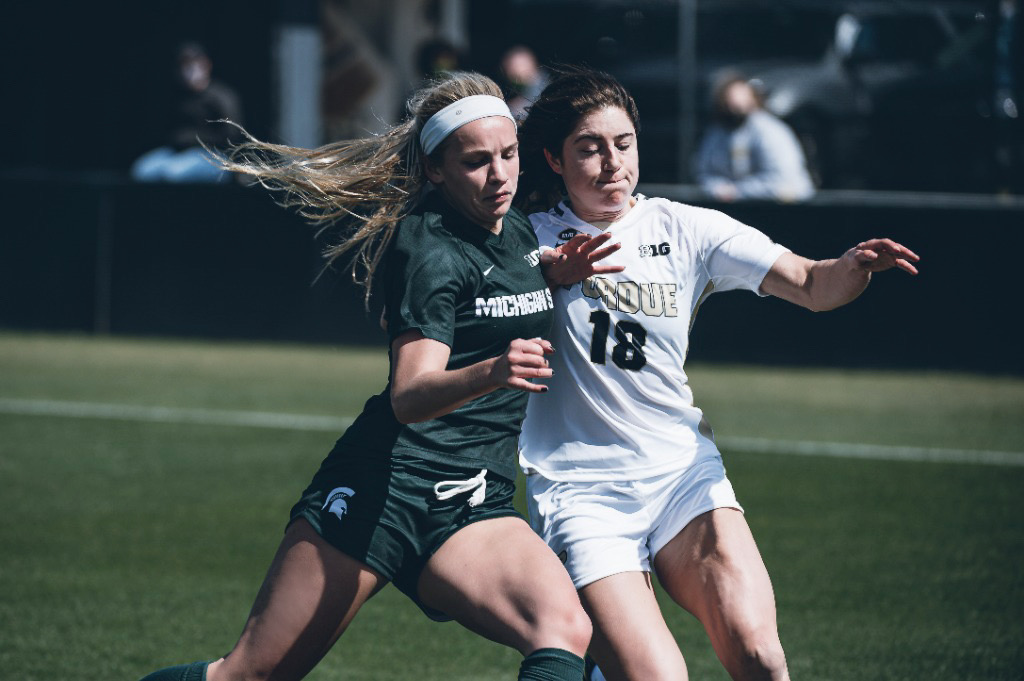 Cox continues to relish her time developing her skills at Mona Shores and in club soccer.

“My high school career was built through Mona Shores and my Midwest United club team,” Cox said. “Both programs taught me what it takes to work hard and achieve your goals. This has carried over with me to my college career. Mona Shores and Midwest United have shaped me into the person and soccer player I am today.”

Her journey through high school took a different route than most.

“I played for Mona Shores varsity for only my freshman and sophomore years,” she said. She was a team captain, broke the school record for points, was voted first-team all-state and was the West Michigan Female Athlete of the year.”

There were many people who helped guide her along the way.

“Some of the more influential include my mom and dad and brother, Drake, who have sacrificed a lot for me as I grew up playing soccer,” Cox said. “They have always been supportive of my dreams and goals about playing at the next level.”

Beyond that there was Lewis Robinson, Dylan Darga, Art Dorsey, and my current MSU coach, Jeff Hosler. Those coaches were instrumental in her development.

“All these people were a huge part in my soccer career, and I am forever thankful for them,” she said.

In 2017, Cox led Mona Shores to its first Michigan district championship. She led the Sailors, as a sophomore, with a school-record 59 points, including 30 assists, also a school record. Her 29 goals is the third-best in school history.

Cox has been on the Dean’s List at Michigan State, been awarded Academic All-Big 10, Big 10 Distinguished Scholar and MSU Athletic Academics High Honors each year.

Cox has a plan for the near future.

“After I get my undergraduate degree at MSU I plan to play my fifth year and start grad school,” Cox said. “Playing professional soccer is something I have dreamed about ever since I was a kid. If and when that time comes, it would be a dream come true.” 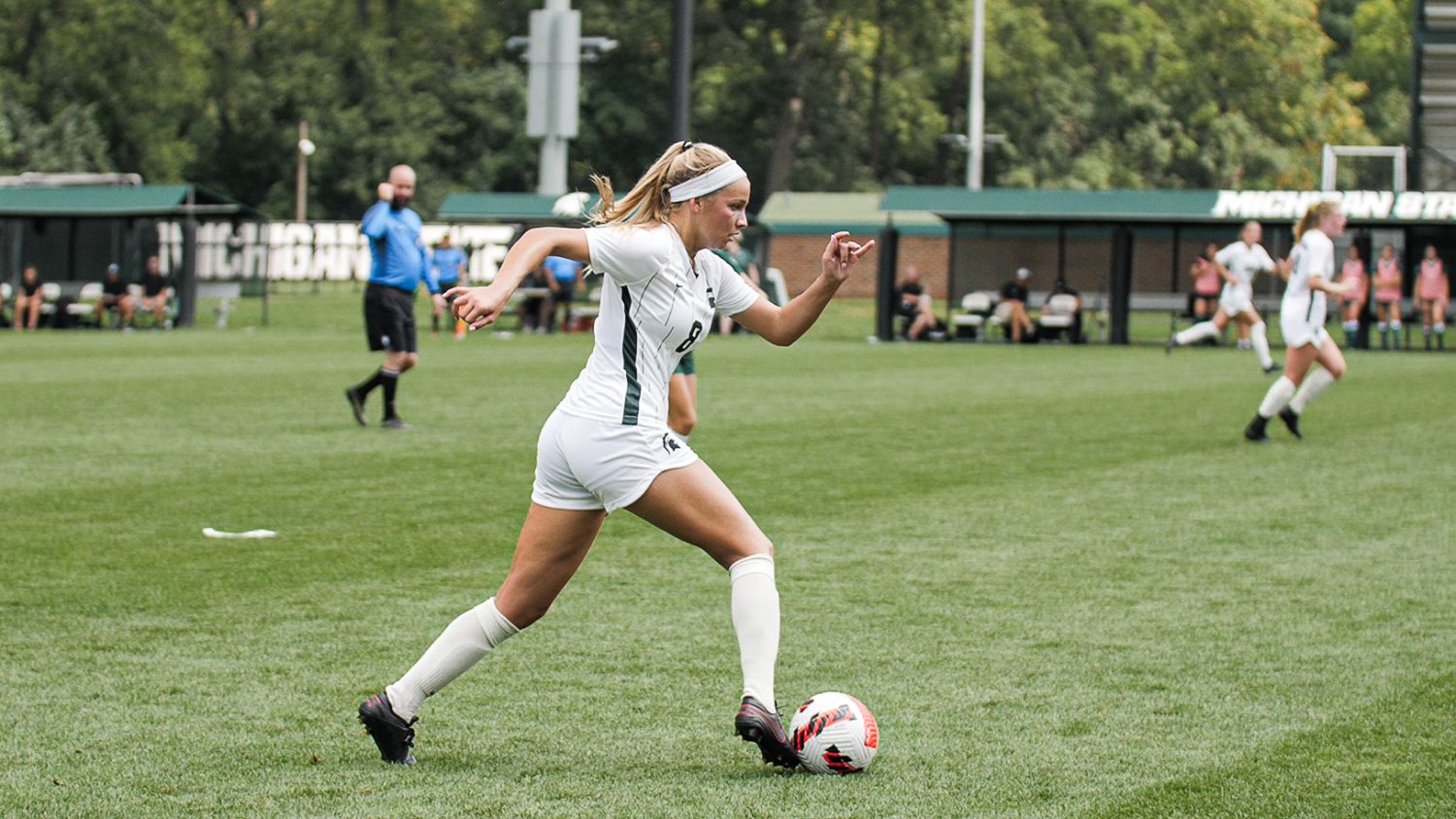 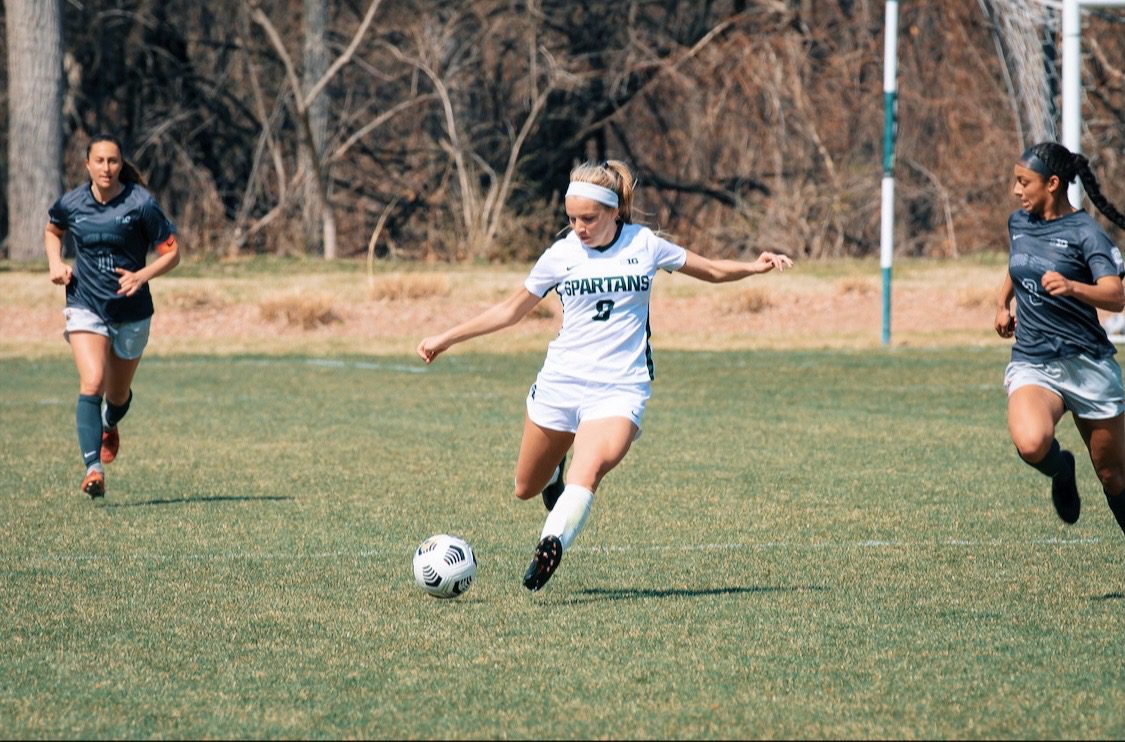 WMC uses strong pitching to sweep a doubleheader from Holland Calvary, 3-2 and 4-3