This time around, Forest Hills Central comes out on top of Mona Shores, wins district title 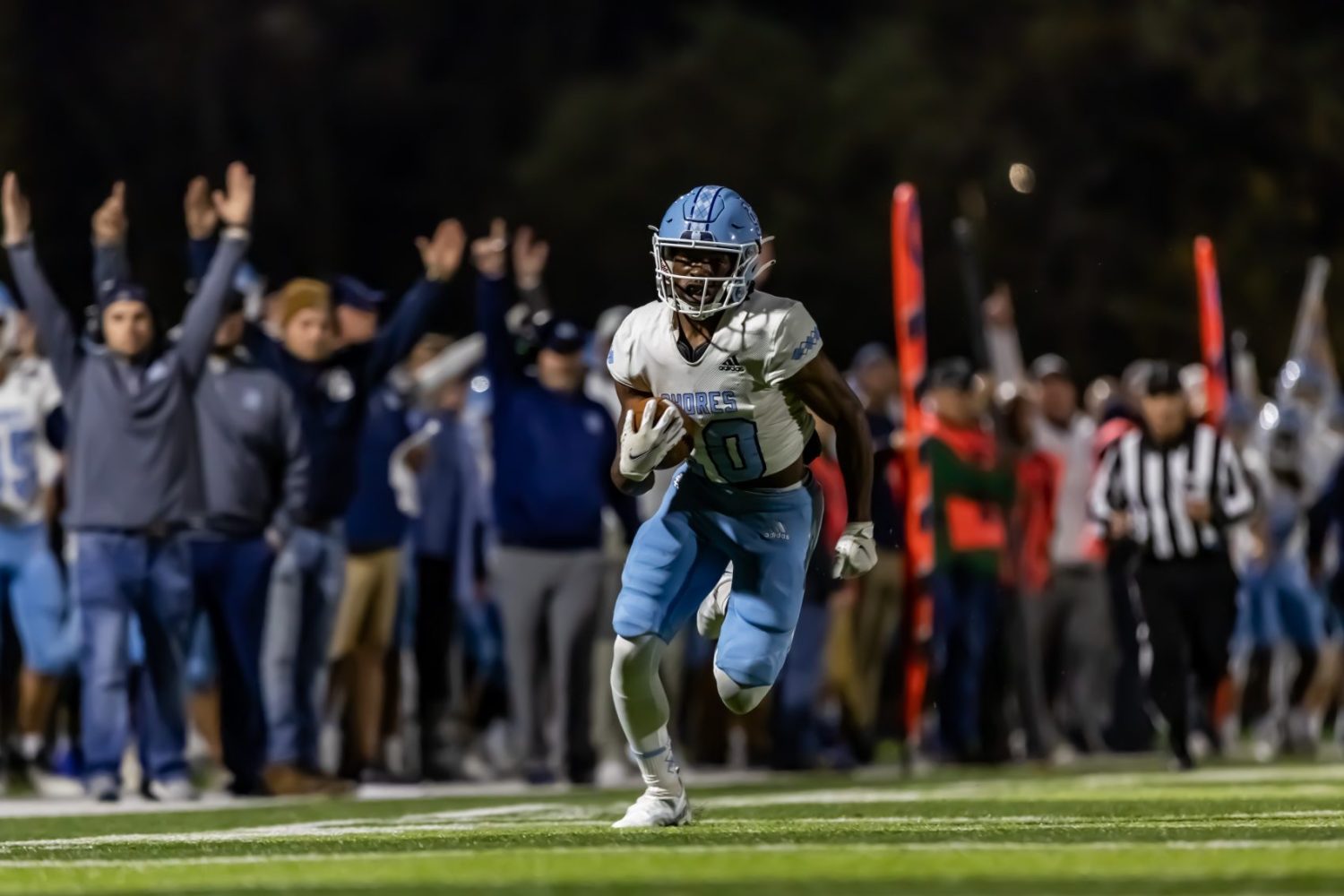 GRAND RAPIDS – When the Mona Shores Sailors and Forest Hills Central Rangers do battle on the football field, you can expect the outcome to be up for grabs well into the fourth quarter.

It happened again on Friday night, and this time, the host Rangers defeated the Sailors 33-21 and earned a Division 2 district championship.

Forest Hills Central (11-0) will host East Lansing, a 34-24 winner over Portage Northern, in a regional contest next weekend.

The Sailors bow out with an 11-3 record.

“These are turning into classics all the time with them,” Sailor coach Matt Koziak said. “They aren’t going away and I hope we’re not going away.”

There were big plays galore from both sides of the ball, but it was the Rangers who turned in the bigger plays at crucial moments in the game.

None was bigger than an impressive goal line stand in the final seconds of the opening half.

With the game tied at 7-all, the Sailors marched down the field. Facing a first down at the 1, the Rangers’ defense stopped the Sailors on first, second and third downs then the clock ran out. The Rangers ran off the field with all the momentum in their possession with a tie game.

“This team has a lot of confidence,” Ranger coach Tim Rogers said. “No doubt, that final drive where we were able to keep them out of the end zone gave us a lot of momentum going into the second half.”

Mona Shores had taken a 7-0 lead in the opening quarter when quarterback Jonathan Pittman hooked up with Ke’Waun Farnum on a 60-yard scoring strike down the right sideline.

Forest Hills tied it in the second quarter on a 21-yard pass from Justin Osterhouse to Roman Brummell.

And that was the extent of the scoring in the first half.

“I think that goal line stand was huge, but I was proud of our kids they came out of halftime and scored on the first possession, then they answered. What a great high school football game.”

After that impressive goal line stand by the Rangers, the Sailors did come out in the second half and march right down the field to score and take a 14-7 lead. Again, it was Pittman to Ke’Waun Farnum, this time from 55 yards out.

But, the hosts responded with three unanswered touchdowns to cap the third-quarter scoring.

Oosterhouse ran one in from 17 yards out, then he connected with JT Hartman on a 57-yard pass then found Mason McDonald from 10 yards out. That final score came after Oosterhouse scrambled around in the backfield, bought himself some time and found McDonald wide open for the touchdown.

Dahmir Farnum scored from 5 yards out and Shores was within five at 26-21.

The key drive for both teams came on the ensuing Ranger possession. Could the Sailors stop the Rangers and mount a possible game-winning drive or would the Rangers put the game away with a long scoring drive.

With Oosterhouse leading the way, FHC marched 65 yards in 10 plays, ate up more than 5 minutes of the clock and took a 33-21 lead. Oosterhouse ran the ball five times for 34  yards, including the final 9 and put his team in the end zone.

The Sailors’ final drive was halted by an interception by Chase Robinson.

Dahmir Farnum finished the game with 18 carries for 109 yards and a touchdown.

“We put together a game plan and our guys executed it to a ‘T,’ Rogers said. “The kids executed at a high level and played with a lot of passion today.

“This is one of my top three moments of my coaching career,” Rogers said. “That is a very well coached team. Coach Koziak does a fantastic job. They are good players and it’s a good program. It’s good to beat a team like that, for sure.”

Koziak praised the Rangers for their effort on Friday night.

“Hats off to Coach Rogers and his program, his staff, his kids,” Koziak said. 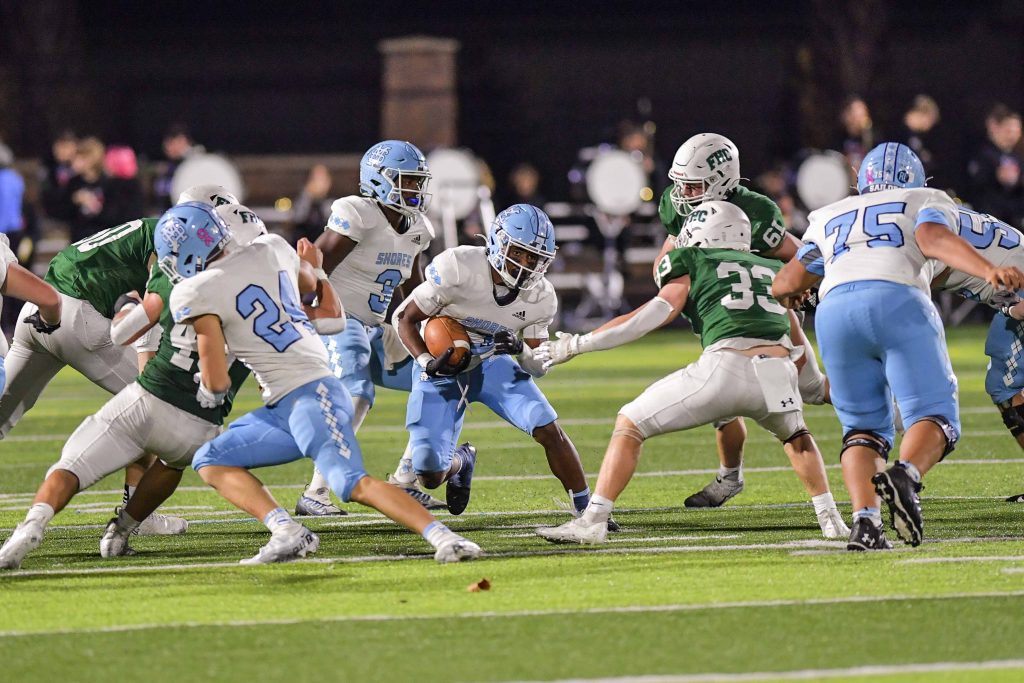 Dahmir Farnum picks his way through the line. Photo/Eric Sturr 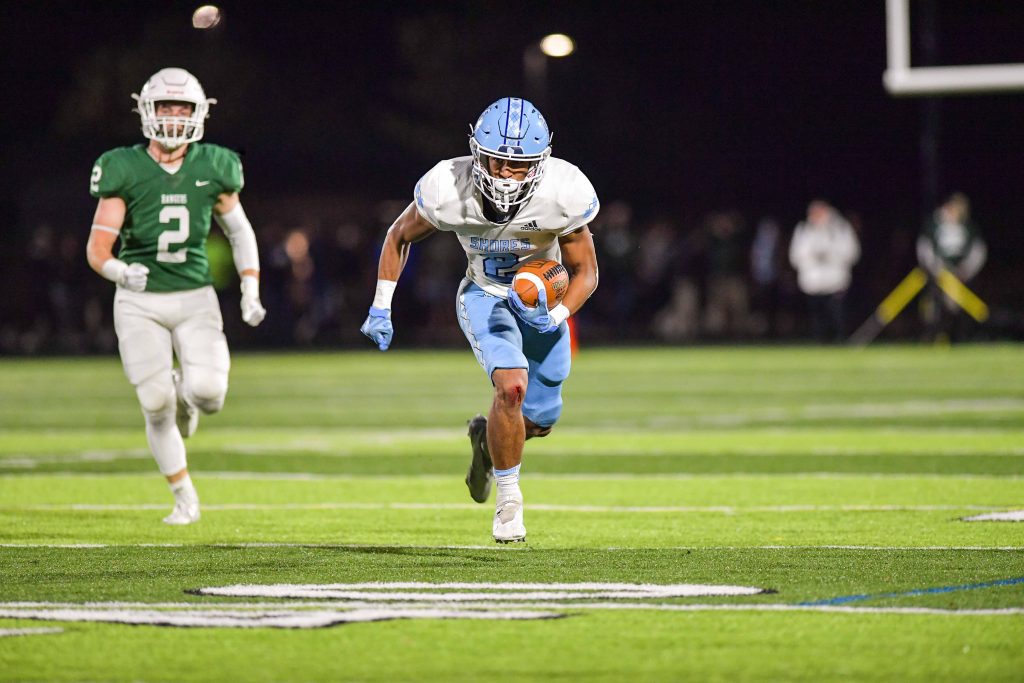 Jaylen Vinton makes a big gain on pass reception to the outside. Photo/Eric Sturr 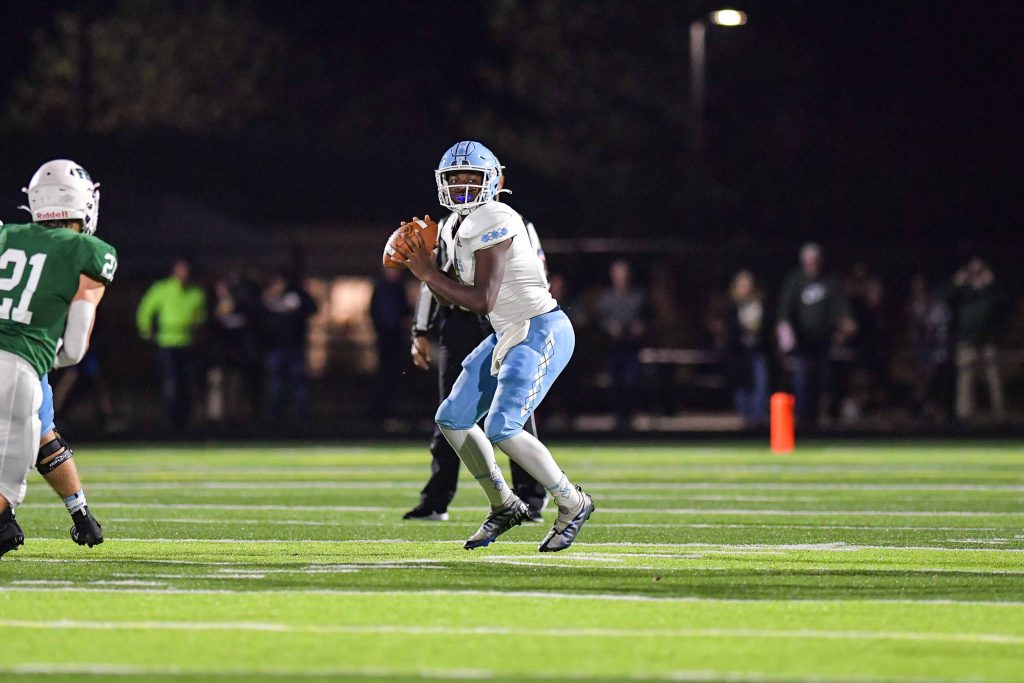 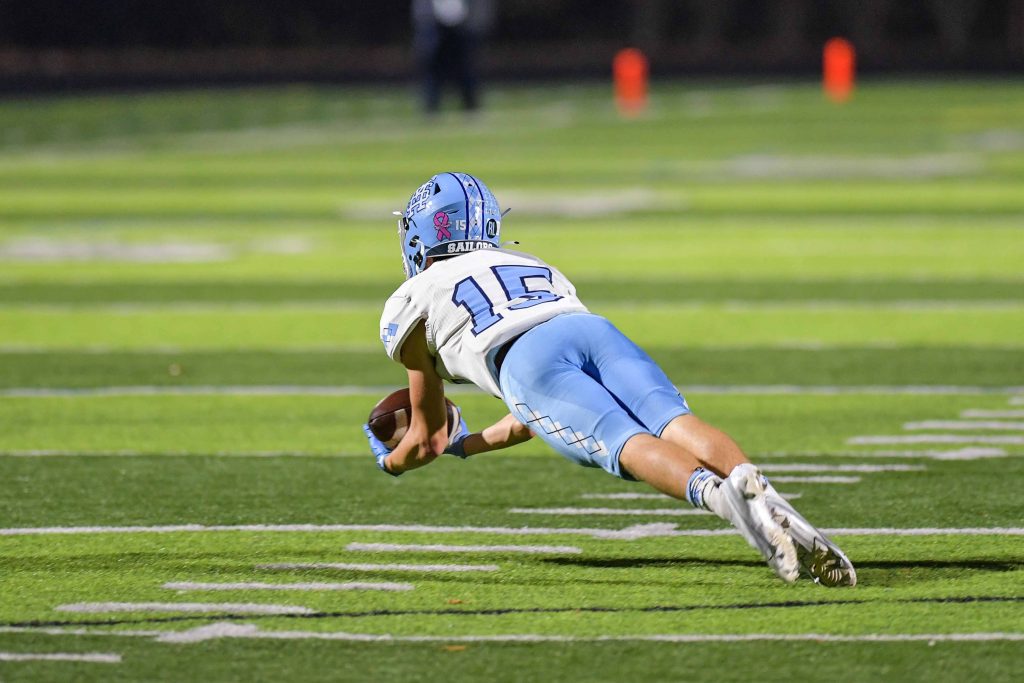 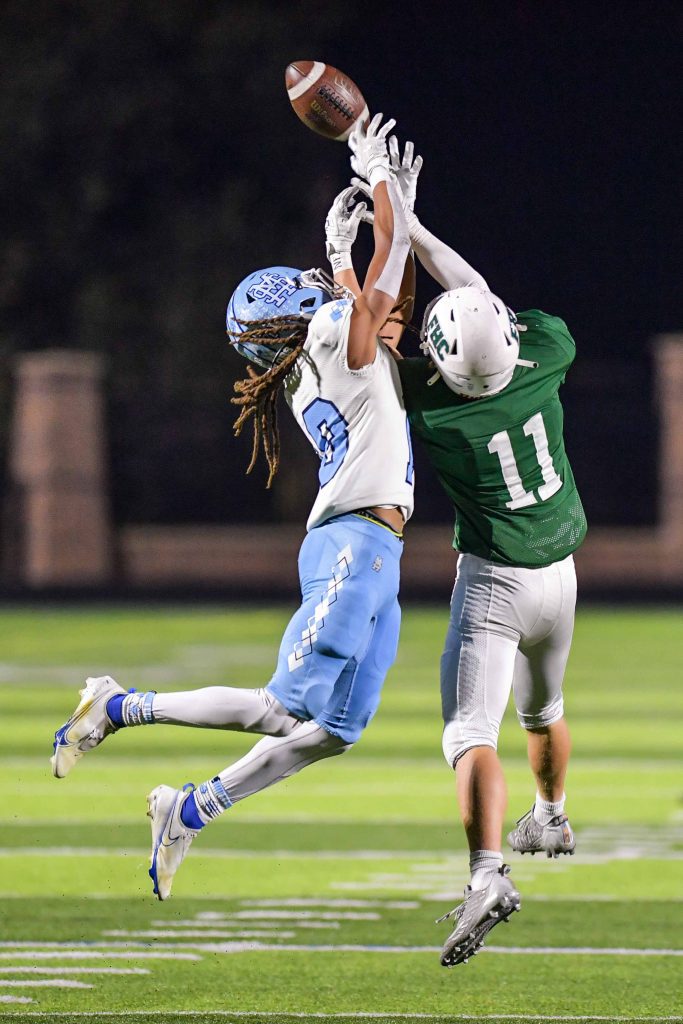 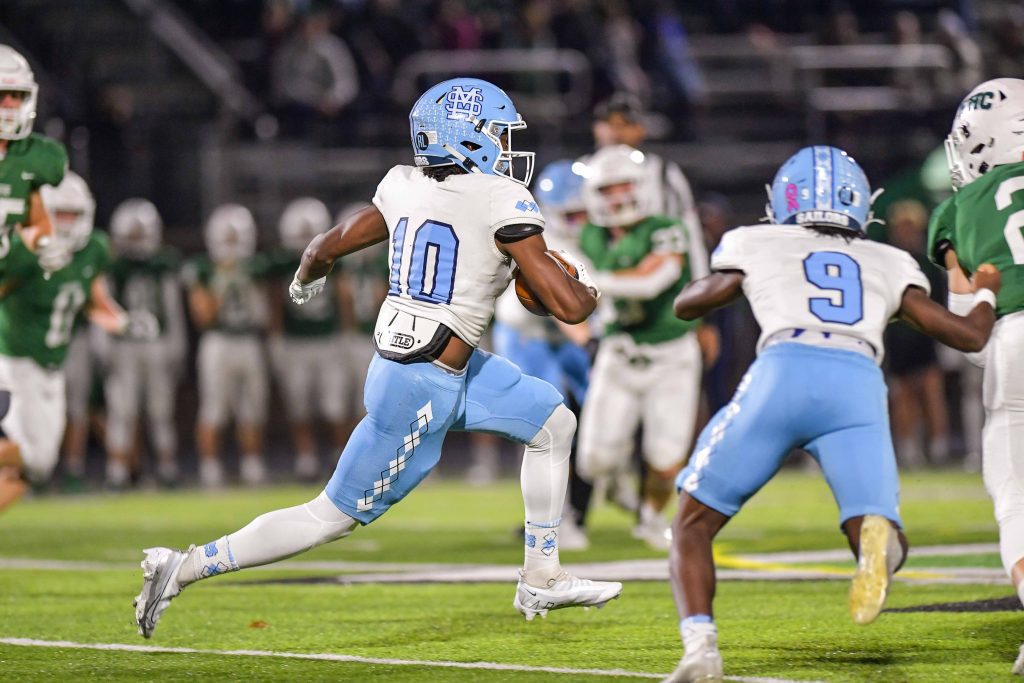 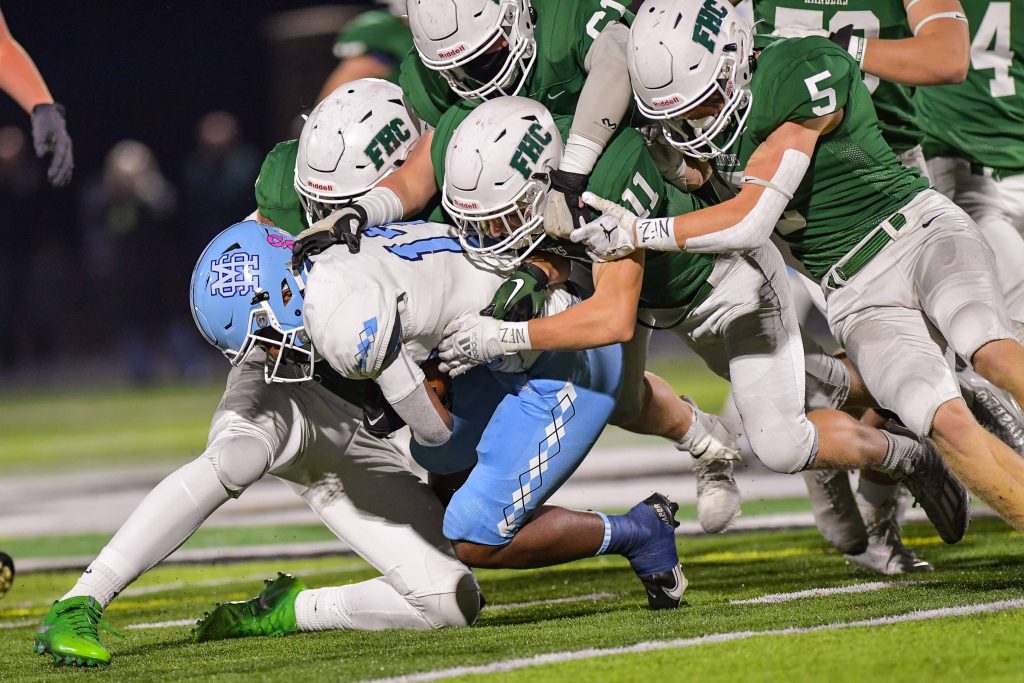 Dahmir Farnum gets brought down by a gang of Ranger defenders. Photo/Eric Sturr