Tough decisions on the horizon for Muskegon Lumberjacks’ coaching staff

The Muskegon Lumberjacks’ coaching staff had high expectations for the group of hockey players that showed up for the USHL club’s training camps.

According to Jacks’ assistant coach Steve Palmer, the players forcing the coaching staff and scouts to make some very difficult decisions as the team’s Main Camp heads toward its final day on Saturday. 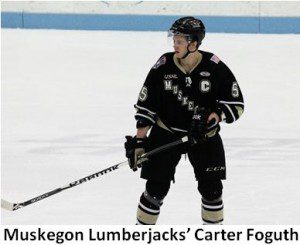 “There are a lot of good hockey players here,” Palmer said. “We have tough decision to made and it’s good.”

Coaches and scouts have huddled in the player’s lounge daily to evaluate players. It’s all part of the process of paring down the roster. On Thursday night, the group was pared to about 80. After Friday, that number will be down to about 40. That group will participate in two all-star games on Saturday.

“The guys are going to have to think long and hard for what’s best for the organization for now and for the future,” Palmer said. “The draft picks and those invited to camp are all good hockey players.  They’ve all come ready to play.”

Coaches have been impressed with the physical condition of the players.

“We really got what we were hoping to get,” Palmer said.

“The guys are definitely going to make it hard on them,” Lumberjacks’ defenseman Carter Foguth said.

And once final cuts are made, players who don’t make it will have opportunities to try to land a roster spot elsewhere.

* Legendary college hockey coach Ron Mason walked in the back door of L.C. Walker Arena ready to get in on the evaluation process. Mason flew from his home in Florida to Canada the drove to Muskegon on Thursday.

* Team president Tim Taylor has been attending scheduling meetings this week. He returned to Muskegon on Thursday.

“We are working diligently on it,” Taylor said. “Although it’s not finalized yet, I’m confident it will be the best collective schedule we’ve had in the 11 years I’ve been here.”

The regular season will consist of 64 games, an increase of four from last season.

* The Jacks’ offer of season tickets for $200 each ends on Saturday.