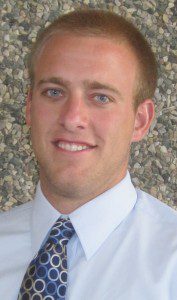 Mastenbrook, who guided WMC’s freshmen team to a 17-2 record last year, will take over as head coach for the Warriors for the 2012-2013 season.

Mastenbrook, who will become just the fourth varsity basketball coach in WMC’s 60-year history, takes over for Goorman who coached at WMC for 44 years, including 33 as the head varsity coach.

Mastenbrook hails from Kalamazoo, where he played basketball for his father, Jerry, at Kalamazoo Christian.

“I’m excited for the opportunity to work with the guys,” Matenbrook said. “I know we will work hard to carry on the tradition of excellence in basketball. I love the passion around this school for basketball and I believe in the greater mission of the Western Michigan Christian Schools.

“I have been around high school basketball ever since my dad started coaching,” Mastenbrook said. “I have been blessed to be able to learn from him, and then being able to come to WMC and learn from another very successful coach in Jim Goorman.”

“I am proud of Kyle and I’m happy for Western Michigan Christian,” Jerry Mastenbrook said. “I know Kyle will work hard to carry on the excellent tradition that WMC has established in men’s basketball.

“Kyle will be an excellent Christian role model and mentor to these young men. Kyle will challenge his players to honor God and do their best both on and off the court,” Jerry said.

WMC athletic director John Swinburne said he was pleased to be able to hire someone from the WMC staff.

“Hiring new coaches is one of the most important jobs we have,” Swinburne said. “We want someone who, of course knows the game, is good with young people, but who will also be a great Christian mentor. We have found that person.”

The new coach, who is a fifth grade teacher at Muskegon Christian, played basketball, football and baseball at Kalamazoo Christian and graduated from Hope College.

In addition to coaching the boys freshmen team at WMC, he also has coached Warrior and Kalamazoo Christian teams during the summer, middle school teams at Muskegon Christian and Holland Christian.

Glerum is joining the WMC teaching staff this coming school year in the physical education department.

The WMC and Calvin College graduate has been teaching and coaching at Whitensville Christian in Massachusetts.