Last month, the Local Sports Journal published a 24-page high school football preview section. Here is the preview story on the Holton Red Devils. If you would like to purchase a copy of the football section, send an email to [email protected]
By Shawn Liverance
Local Sports Journal
They may be short on numbers, but the Holton Red Devils football team doesn’t lack in confidence heading into the season.
The Red Devils only have 17 players on their roster but believe they can compete this season for a conference championship and a spot in the playoffs.

Jeremiah Sergent, Nate Bennett and Chase Smith have their eyes on a successful season for the Red Devils. Photo by Shawn Liverance.

“Our goal is to make the playoffs and win a couple of games once we get there,” senior Jeremiah Sergent said. “We know we can’t afford many injuries though.”
With very little depth, the Red Devils know staying healthy will be a key.
“Our expectations are more wins this season,” junior quarterback Chase Smith said. “We have been working ten times harder this off season. We have some great athletes, and I think the best offensive line in the conference. We just need to keep everybody on the field.”
Anchoring the offensive line will be senior left tackle Nate Bennett.
“I can’t wait to get going,” Bennett said. “We have worked really hard. We expect to win games this season, and I know we can do that. We have some really good players.”
The Red Devils enter their second season under Coach Chris Hilliker, who brought the veer offense from Muskegon High School.
It will also be the second season Smith (5-foot-10, 170) has guided the Red Devils veer offense from his quarterback position.
“I am feeling really confident running our offense,” said Smith, who became Holton’s starting quarterback his freshman year. “I am reading the defenses much better now.”
“We have lots of speed on the edges,” Smith added. “But, we can also run it up the middle when we have to behind our offensive line.”
A strong running game is key in the veer and fullback Sergent (6-foot-1, 180) will be a key to lead Holton’s rushing attack.
“I am looking forward to running behind our offensive line,” said Sergent, who also plays middle linebacker. “We have the backs and the line to move the ball.”
Bennett (6-foot-3, 265), a senior, is coming off a separated shoulder he suffered last season but is healthy now and ready to contribute this season.
“I am healthy and ready to lead our line this year,” said Bennett, who will play defensive tackle on defense. “I don’t care where I play on either offense or defense. I just want to be out there.”
Also expected to contribute on both sides of the ball this season for the Red Devils will be senior Caleb McCall (5-foot-10, 180) at middle linebacker and juniors Corey Sokolowski (6-foot-1, 180) at outside linebacker and defensive end Austin Gillette (5-foot-10, 215).
Sergent, Bennett and Smith will all be looked upon to provide leadership for this year’s Holton squad.
“All three are good kids,” Hilliker said. “Really, I have been impressed with the whole team’s willingness-to-succeed attitude they have.”
Hilliker has set his season expectations on a week-to-week basis for the one of the smallest schools in the Central States Activities Association.
“We want to be champions every week,” Hilliker said. “If we are champions of each particular week, then we will be successful. Yes, depth is a concern, but if we stay focused each week, I think we will be just fine.”
Defending league champion Reed City and Morley-Stanwood should once again be the top two teams in the conference, Hilliker said.
“Reed City is probably the favorite,” said Hilliker, whose team opens the season against new conference opponent Newaygo. “They return quite a few guys from a 10-1 team last season.”
Sergent said the time he and his teammates have put into off-season workouts will pay off this season.
“Guys are buying into the system,” Sergent said. “We have been in the weight room and working out all summer. We want to win games this season.”
The extra work the Red Devils have put in has Smith thinking that the Red Devils will surprise teams this season.
“We are a very well-conditioned team,” Smith said. “That will help because most of us play both ways. I believe there is not a team in the conference we can’t beat.” 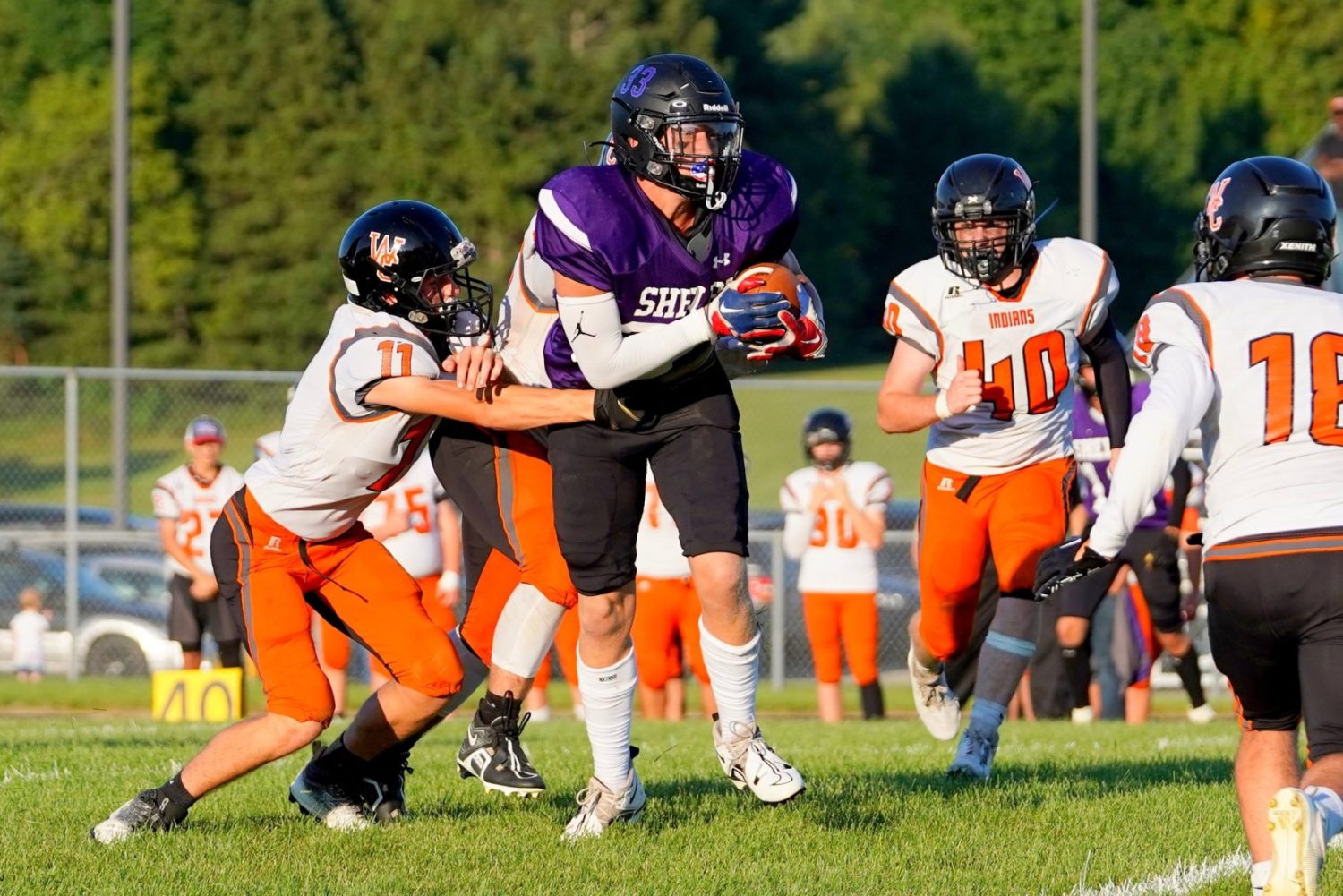 White Cloud comes from behind to beat Shelby 40-20; Silverthorn leads the way