Last month, the Local Sports Journal published a 24-page high school football preview section. Here is the preview story on the Mona Shores Sailors. If you would like to purchase a copy of the football section, send an email to [email protected]
By Mike Mattson
Local Sports Journal
Bad boys are lining up in the trenches at Mona Shores.
According to Alek Jend, the Sailors want to be nasty and bold on the offensive line. 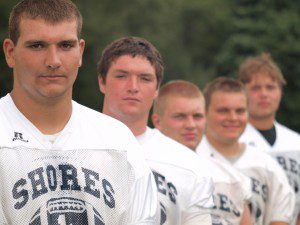 “With Collin Sullivan at center and Brandon Gue and me, we plan to make some trouble for some defensive lines,” said Jend, a senior right guard. “I would have to say, with all the hard work we put in during the offseason, this year will definitely be one of the best lines ever at Mona Shores.”
The O-line will be a key for the Sailors, who sputtered to a 1-8 record and averaged only 14.3 points per game last season.
Four of the five interior linemen are returning senior starters – tackles Jake Bordeaux (6-foot-1, 230) and Gue (6-foot-2, 265) and guards Brandon Stafford (5-foot-10, 240) and Jend (6-foot, 230).
Sullivan (5-foot-9, 225) is a junior and tight end Landon Kresnak (6-foot-3, 230) is a senior.
“They live in the weight room,” Shores second-year head coach Matt Koziak said. “It will all start with these guys. I say, ‘We will hop on your backs and you guys carry us. It’s what you guys do up front that counts.’”
Shores should be stronger with 45 players competing on a powerlifting team that finished strong at the regional competition.
If the Sailors can open holes for Shores’ talented skill players, including sophomore quarterback Tyree Jackson, the offense should light up the scoreboard with much more frequency this season.
Gue said it’s time for the Sailors to earn some respect up front.
“We should be able to lead the way for all of our skill guys,” said Gue, a team captain along with Darnell Longmire, Lovepreet Singh and Jend. “Part of the reason we didn’t score much last year was because of the line. This year we are bigger, faster and stronger. We should be able to score a lot more points.”
Koziak implemented the spread option veer offense last season. He predicts the offense will make vast improvements in his second year.
“It is going to be exciting,” Koziak said. “We are a veer team, and we throw the ball, too. We are dynamic. If you load the box, we will throw. If not, we will run.”
It will all start with Jackson (6-foot-1, 170), who is 30 pounds heavier and knows the offense inside and out. Last season as a freshman, Jackson completed 69-of-159 passes for 1,368 yards and 12 touchdowns.
“He was a 13-year-old at 139 pounds we threw into the fire last season,” Koziak said. “He’s bigger and stronger. And he had a real good offseason.”
Longmire (5-foot-9, 190) returns at fullback and will get his carries after rushing for a team-high 519 yards last season.
Muskegon senior transfer Chris Bradford (5-foot-8, 170) also will be a key weapon at slotback with his 4.4 speed.
Muskegon Heights junior transfer Asanti Brown (5-foot-11, 175) has good speed and hands and will fill the wide receiver void left by Aaron Doriot.
Junior Logan Smith (6-foot-4, 200) is another big target at wide receiver.
Defensively, Darrius Gooden (6-foot-1, 290) will anchor the line at noseguard. Sophomore Carter Simpkins (6-foot-4, 210) is a key player at end and Kresnak and Jend are back at the tackles.
Junior inside linebacker David Bloom (5-foot-11, 200), who had 25 tackles last season against Holland, and linebacker Singh will be key defenders. Junior outside linebacker Jake Workman (5-foot-10, 190) and junior defensive back Cody Schneider (6-foot-1, 175) are other key defensive players.
Koziak is pleased with the returning experience, but he said the attitude must change this season.
“They are the big brother this year,” Koziak said. “The average age of the varsity last year was 15.5. We were like little brothers learning the speed of the game. I tell them, ‘Now, you are the big brother.’ They must know they are not the 1-8 team from last year.”
Gue and Jend are ready to lead the way as Shores attempts to qualify for the state playoffs for the first time in school history.
“Our main goals are to win the conference and make the playoffs,” Gue said. “We’ve had 90 kids in the weight room every day getting after it. I am just looking forward to the season and hope all the hard work pays off for us.”
Jend said the Sailors have a better grip on the offense and blocking schemes. And, he adds, team confidence should be at an all-time high starting with the season opener against cross-town rival Muskegon Catholic Central.
“Our team has really developed a lot since last year,” Jend said. “We have to put the pedal to the metal and finish each game 100 percent. I can’t wait for game one.”

Kent City explodes in first half, cruises to CSAA victory over White Cloud