The Muskegon Lumberjacks got exactly what they deserved on Friday night.

Two more points in the USHL’s Eastern Conference standings. Not bad considering the fact the Jacks fell behind 3-0 after one period to the talented Chicago Steel. 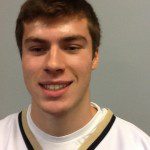 But on Friday, the victory was not secured until Max Shuart took a pass from Chad McDonald and buried a shot into the net 3:45 into the overtime period to give the Lumberjacks a 4-3 victory over the Steel.

The first period was a rough one for the Lumberjacks (6-0-1).

“You don’t want to put yourself in a hole ever like that, and certainly not against a good team like that,” Lumberjack coach Jim McKenzie said. “But, the guys sucked it up as the game went on and started getting more chances and not giving up as many in the second. We killed off a big five-minute major, and in the end, just found a way to put the puck in the net.”

Chicago was the team putting the puck in the net in the early going. The Steel (5-2) scored three times in the opening 20 minutes, including one just a minute into the game. Thomas Ebbing snuck a shot past Lumberjack goaltender Kevin Lindskoug.

Slightly more than three minutes later, Chicago struck again. This time, it was a 3-on-2 break that ended when Phillip Marinaccio scored his first goal of the season to make it 2-0.

At the 15:01 mark, Muskegon defenseman Rasmus Bengtsson turned the puck over and Christian Heil broke in alone and converted to make it 3-0.

Muskegon came out flying in the second period, but was rewarded just once when Joseph Cox stole the puck in front of the Steel net and found Adam Gilmour, who shot the puck under goaltender Alex Sakellaropoulos and that made it 3-1.

But that was it as far as cutting into the Steel lead.

Things could have gotten much worse for Muskegon when Campbell Elynuik was whistled for a major penalty for making contact with a Chicago player’s head on a check into the boards. After a fight, Elynuik was gone for the night.

However, Muskegon’s penalty killers did the job killing off that five-minute major that started in the second period and ended early in the third.

To make matters worse, referee Kenneth Anderson awarded a penalty shot at 4:02 of the final period, but Lindskoug stopped Marinaccio and the score remained 3-1.

The Lumberjacks missed a quality scoring chance, but seconds later, defenseman Carter Foguth fired a wrister from the right side the found the back of the net. Connor Hurley and Tyler Heinonen assisted.

With time running down, Lindskoug headed to the bench for the extra skater, but before he could get on the bench, Ben Foster broke in alone on the Steel net, went to his right and rattled the puck into the top of the net. That goal came with 30 seconds remaining.

In overtime, the Jacks’ scoring play started on a huge open-ice hit by Chris Leibinger. The puck came loose and Muskegon was off and running with an odd-man rush. Chad McDonald made the pass and Shuart made the shot and the Lumberjacks celebrated another victory.

“We’ve got a lot to work on,” McKenzie said. “So far so good and maybe the identity is they don’t give up.

“I don’t like the idea of the other team getting ahead or us playing into the other team’s hands by the style they play,” McKenzie said. “But there was never a point where guys were on the bench hanging their heads.”