A pistol-toting spectator from Hudsonville Freedom Christian brought a boys soccer game to an abrupt halt on Thursday night.

Western Michigan Christian coach David Hulings pulled his team off the field and asked fans to exit Warrior Field after the fan, who was asked to leave the property after he was seen carrying a gun, returned several minutes later. Several spectators from Freedom Christian confirmed the man was connected with the Falcon team.

Freedom Christian was awarded a 2-0 victory in a game that was stopped with about 30 minutes remaining in the second half.

“Had he left it would have been fine, but he came back,” said Hulings. 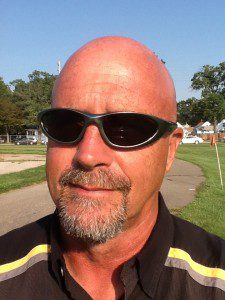 It was not known if the fan returned with the gun, however, a holster was seen on his right side when he did return. His shirt was tucked inside his pants on the right side and the holster was clearly visible. Hulings said he saw the holster, wasn’t sure if the gun was still inside so he immediately pulled his team off the field.

WMC assistant coach Mike Teeter first spotted the fan with the gun and asked team trainer Shelly Ward to verify what he saw. Teeter then approached the fan and asked him to leave. In the meantime, WMC school officials called the police.

The fan had several men accompanying him. They were seen videotaping the entire incident from being first approached, being asked to leave then being escorted out the gate. They also videotaped what transpired in the parking lot when Officer Conrad from the Muskegon Police Department approached them and asked for identification and his permit.

Officer Douglas Conrad said the fan has a Concealed Pistol License and did nothing illegal. A recent ruling in Michigan states he is allowed to open carry a gun onto school property. Hulings said he was of the understanding that guns are not allowed on any school property.

It was the safety of his players and fans that was of utmost concern to Hulings, thus he pulled his team off the field and forfeited despite the fact his team was losing the game 2-0.

Officer Conrad said it’s becoming more and more common for pistol carriers to videotape such incidents and put them on YouTube with the message to the effect of “our gun rights are being infringed upon or challenged.”

Big Reds motivated by their anger over technical fouls, seal a 65-54 win over Grand Rapids Christian