MUSKEGON  TOWNSHIP – The Orchard View football team was already the story of the 2019 season, going undefeated through the first four weeks after winning only twice last year.

But most of the Cardinals’ victories came in pretty competitive games.

There was nothing competitive about Friday night’s affair, when Orchard View hammered Manistee 58-7 in a key Lakes 8 Conference contest.

Sophomore running back Darius Williams was the show-stopper, scoring four times, with a pair of kickoff returns for touchdowns. The Cardinals found the end zone on every first half possession.

Orchard View improved to 5-0 overall and 2-0 in conference play. The Cardinals will host Ludington next Friday in a game that could go a long way toward determining the Lakes 8 title. 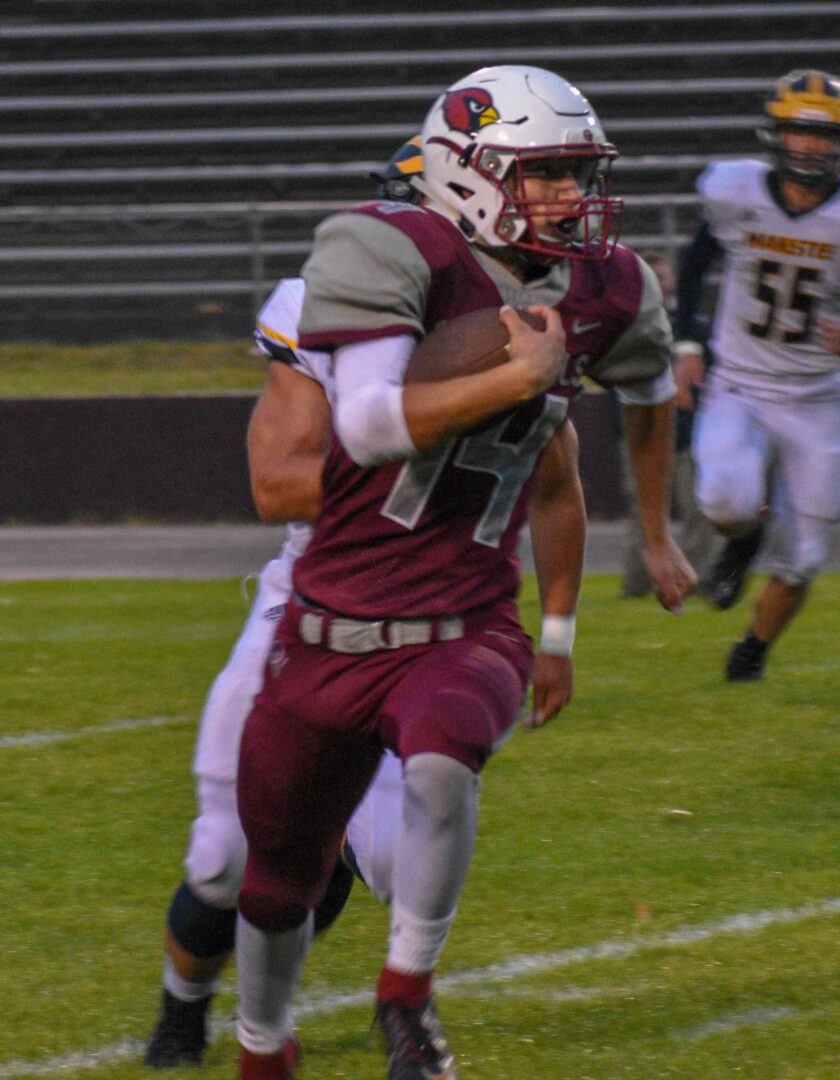 The Cardinals jumped out quickly when Williams took the opening kickoff 80 yards for a touchdown and a 6-0 lead.

That was just the beginning. OV built a 30-0 lead after one quarter, with rushing touchdowns from Edmari MItchell (19 and 3 yards), and Alex Andrews (8 yards). Both backs scored on 2-point conversions after their respective scores.

“It was a pretty dominate performance up front for us,” said OV coach Fred Rademacher. “The coaching staff does a great job of getting the team ready to play, and we played tough, physical, and disciplined football.”

Maverick Colon started the second quarter scoring for the Cardinals with a 29-yard TD run to give his team a 38-0 lead two minutes in. Williams added scores from 45 and 33 yards out for a 52-0 halftime lead.

Orchard View ran the ball 24 times in the opening half for 298 yards, while the defense held the Chippewas to 67 total yards and no first downs.

Williams had two carries for 78 yards in the first half, but it was his opening kickoff return that sparked his team.

“We were all excited and we knew it was going to be a good game after that,” the sophomore said. “We just went out there and did our thing.”

With a running clock in the second half, OV only had the ball twice, punting both times, one of which was blocked, leading to Keegan Bonzheim’s 3-yard TD run for Manistee’s only score with two minutes left in the game.

Williams finished the game as he started it, returning a kickoff 80 yards for his fourth TD of the game.

“Obviously I’m happy with the way our team played,” Rademacher said. “We’re getting better every week, and I hope we are even better next week.”

The Cardinals finished with 318 total yards, all on the ground, led by Mitchell with 87 yards on seven carries. Williams finished with 78 yards and Tavion Chavez added 39 yards on five carries. 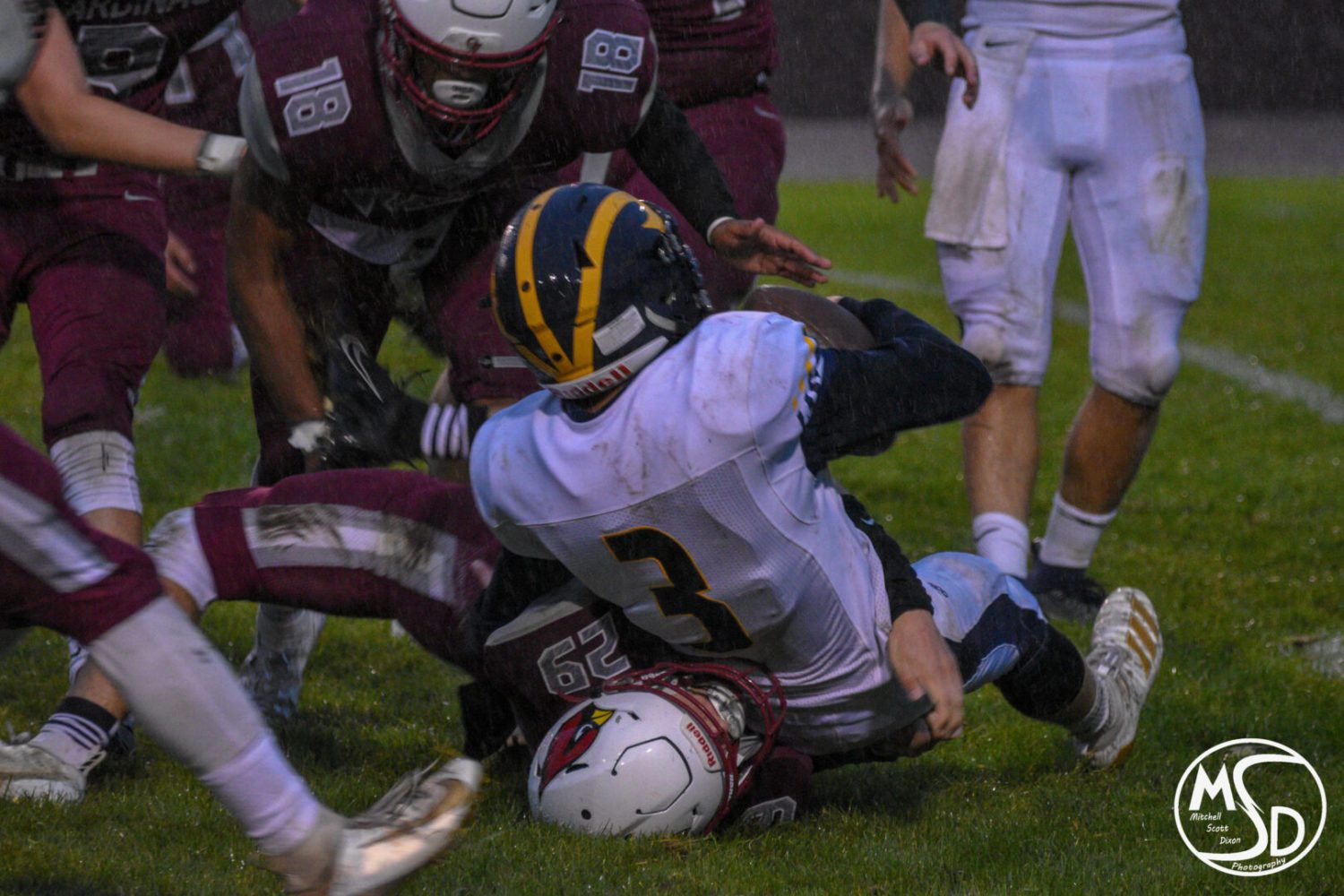 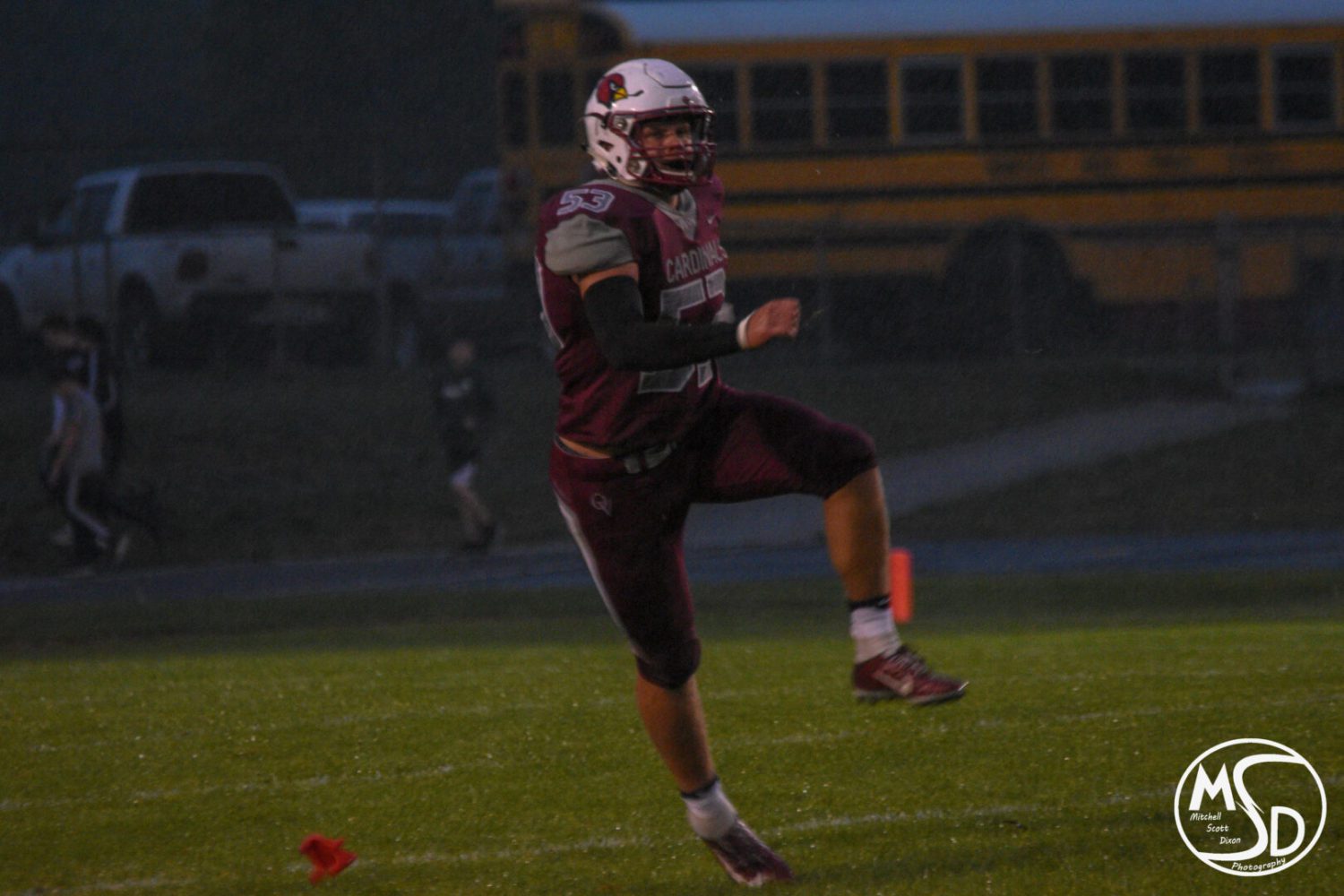 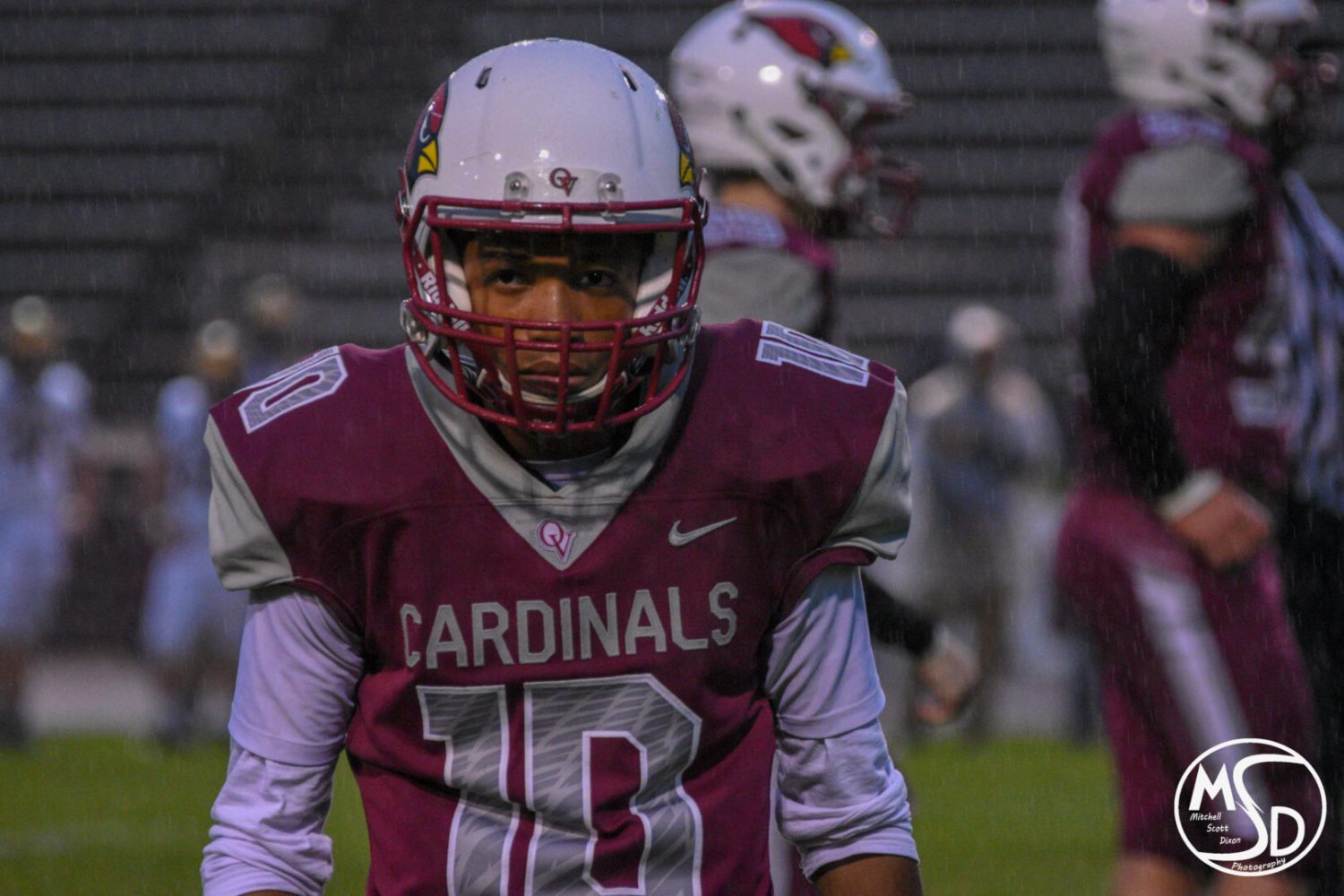 OV’s No. 10 Darius Williams looks to the sideline between plays. Photo/Mitchel Dixon|MSD Photography 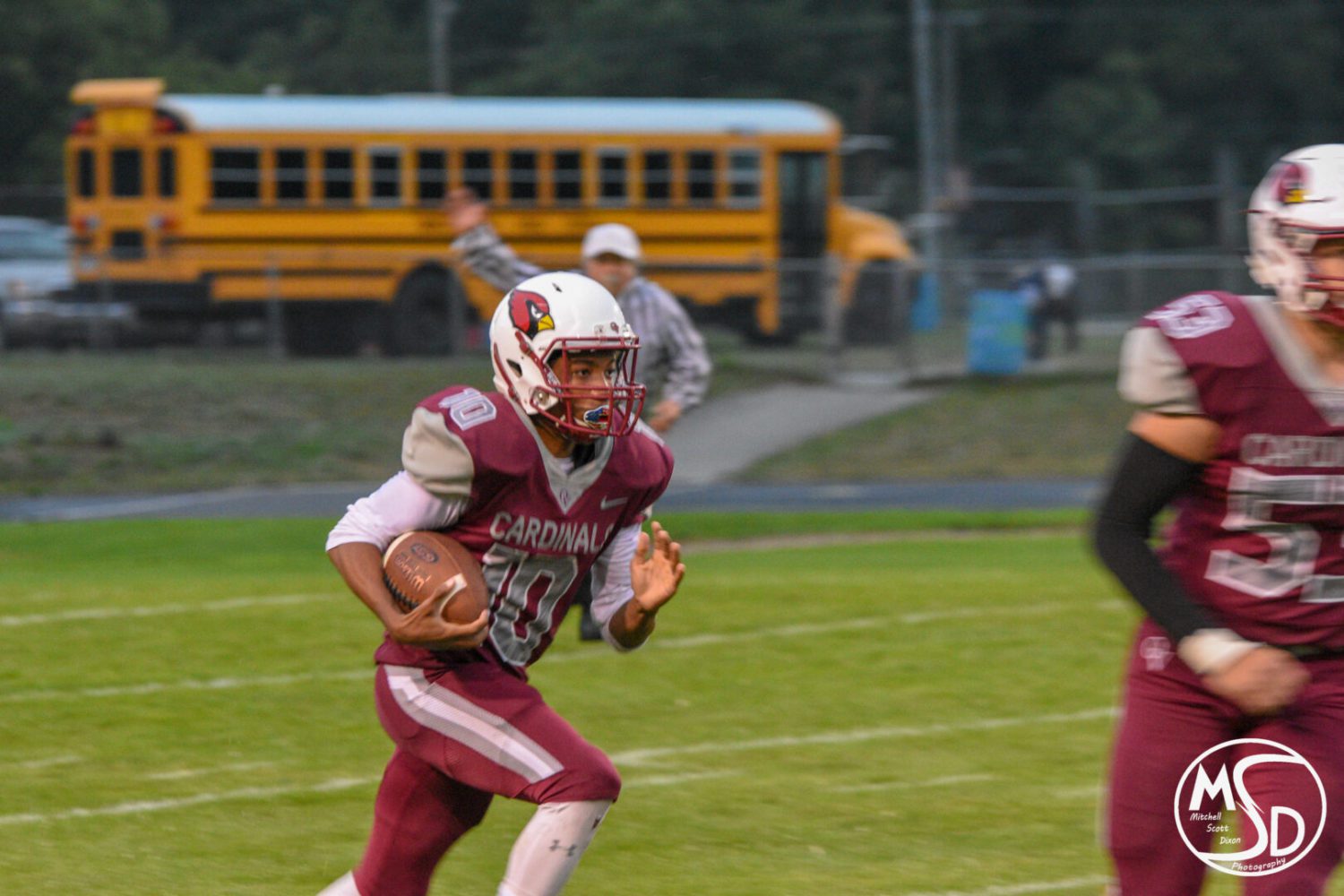