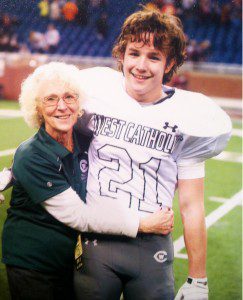 So much so that Tyler knew things only the staff and the West Catholic players knew.

Well, at least she knew one thing known only by the staff and the West Catholic players.

It’s a trick play called the Lou Lou.  You may have seen it during the Falcons’ 2013 Div. 5 state title game versus Menominee.

Tied 7-7, West Catholic entered the third quarter looking for a spark, something to change that deadlock into a narrow lead, and then into a controlling lead. And they got it from the Lou Lou, a play drawn up and inserted into the playbook that could only be used at the perfect moment.

And that moment came, in a big way.

Late in the third, the Falcons lined up in what looked like field goal formation… 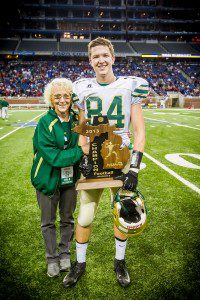 Only this time, Falcon junior tight end Bryce Witham was walking unguarded toward his own sideline.

Perhaps Menominee thought Witham was leaving the game, or maybe the Maroon defensive backs were too focused on blocking the 47-yard kick attempt to notice him “…jogging toward the numbers,” said Rohn.

“I was going to call a timeout if anyone followed him,” laughed Rohn as he recounted it. “We were only going to run it if (Witham) wasn’t noticed.”

At that moment, Witham may as well have been invisible to the Maroons, because they failed to see him.

And he knew it.

A direct snap to the Falcons’ field goal kicker Travis Hoving, who then lofted it to Witham for the 30-yard TD pitch-and-catch, certainly turned the game in West Catholic’s favor.

Oh, if only Menominee had Mary Tyler on its sideline; the Maroons would have known West Catholic was up to no good. Why? Because just before the play was run, Mary Tyler said, “It’s the Lou Lou. They’re running the Lou Lou.”

And indeed they did.

How Mary Tyler came to know the Lou Lou is as pure a high school football story as you’re going to find.

A longtime benefactor of Muskegon Catholic Central, Tyler had the rare privilege this past football season of watching her two grandsons win state titles.

First there is West Catholic’s Nick Buursma , a junior linebacker/running back for the Falcons’ second-straight state title team. Just last month, Buursma had a sack and fumble recovery in the Falcons’ regional title win over Olivet.

Then there’s Muskegon Catholic’s Ian Tyler, the dominating defensive end/tight end who heads to Columbia next fall to play football . He’s first in his class, a darn good basketball player to boot, and just an all-around good kid. 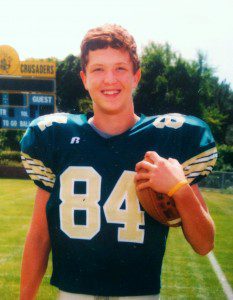 Tyler was close to both football programs this season, spending time getting to know Rohn and first-year Muskegon Catholic head coach Steve Czerwon.

Both say Tyler knows her football.

For Czerwon, his full introduction to Tyler was, of course, gridiron related. Back when Ian was in middle school, Czerwon was the middle school football coach. Ian was always a big piece of the Crusaders’ scheme, so Czerwon opted to send a pass the tight end’s way on a game-winning pass attempt. The pass fell incomplete and the team lost the game.

Afterward, as Czerwon was leaving the field, Mary Tyler was there to greet him.

“She told me, “That dump pass didn’t work out very well,”” remembered Czerwon with a laugh. “So I knew fairly quickly that she was watching pretty closely.”

Rohn too knew Tyler was watching with an eagle eye, and so he decided to tell her in November about the Lou Lou.

“We put it in during the playoffs,” said Rohn. “But we hadn’t really given a name.”

Rohn has deep roots in Muskegon. A 1989 graduate of Orchard View High School, Rohn went on to play football at Grand Valley State University, and then, as a young coach, took over Fremont’s high school football team. For nine seasons, Rohen compiled a 52-34 record and guided the Packers to six playoff appearances.

But he has an even deeper connection to the area. Rohen’s mother, Mary Lou Rohen (Farr) graduated from Muskegon Catholic , and is buried in Muskegon’s St. Mary’s Cemetery.

Rohen was there this fall, reflecting on his mother’s passing some 25 years ago. Later at practice, when asked what they were going to call the trick play, Rohn responded, “Let’s just call it the ‘Lou Lou’.”

He had his mother on his mind.

Rohen described the play to Tyler, looking to get her thoughts as to its efficacy.

“It’s going to work,” was her response.

So that’s the reason Tyler knew of the play; and she saw it coming a mile away.

Despite having two grandsons on successful teams, it wasn’t all smiles for Tyler this season. In past seasons, it was a point of pride that Tyler was able to make both grandsons’ football games. But this year, with both boys on their respective varsity squads, she had to make a choice.

“I agonized over it,” said Tyler. “I had to alternate between the teams, watching Ian one week and Nick the next week.” 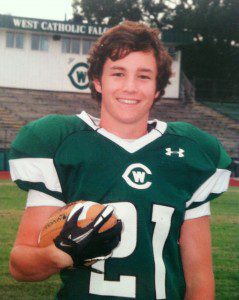 But it got complicated once the playoffs arrived. With both clubs facing elimination each week, Tyler had to rely on smart choices lest she pick the wrong game and fail to miss her other grandkid’s last game of season. Amazingly, Tyler chose to forgo attending Muskegon Catholic’s huge playoff game versus Mendon, picking instead to go watch Nick and the Falcons take on Olivet in the regional title game, the contest in which Nick earned the aforementioned sack and fumble recovery.

“I relied on faith,” Tyler admitted matter-of-factly. “I just woke up knowing that we were going to beat Mendon. So I went to Nick’s game.”

Muskegon Catholic, of course, defeated the Hornets 28-12. Two games later and the Crusaders moved on to win their ninth MHSAA state title (its tenth overall), while West Catholic won its second title in a row and third in the Rohn era.

But spend even a couple minutes with Tyler and you’ll be convinced she would have been there whether the teams were undefeated or winless. Sure, in the latter scenario, Tyler would be right there in both coaches’ ears, giving them advice and probably a tongue lashing or two. But she would be there just the same.

Czerwon tells a story that confirms this claim.

But that wasn’t the whole truth.

“And she promised me if we won the state title,” said Czerwon, “she’d make me another.”

Low and behold, there was Tyler at Czerwon’s door, the Sunday after his team’s state title win.

“She kept her promise,” said Czerwon.

And she kept her promise to her grandsons, going to every game she could make, loving the dickens out of them as they grew into the young men they are today. It’s fitting, though, that she did all the things we’d hope every grandmother would do, because Tyler said she owes those kids as much as they owe her.

“Those boys, all the grandchildren, kept me going after my husband died,” said Tyler. Her husband, Stan, was a huge personality around town, and did a multitude of things to boost the visibility of both Muskegon Catholic Central and the larger Muskegon community. He died suddenly in 2001 at the age of 66.

“The kids kept me going when it was hard to go on,” said Tyler.

Part of that healing took place watching, studying, the game of football from the stands of Kehren Stadium.  What many consider the greatest team sport in the world does as good a job uniting the players on the field as it does the fans in the stands. It’s one of the reasons Tyler loves the game so much.

Rohn said this is the glue that holds together the outstanding football tradition in Muskegon County.

“There I am,” Rohen said, describing his trip to St. Mary’s Cemetery last month, “just a few blocks from the (Tyler family’s business, Tyler Sales Company), just down the road from Muskegon Catholic.”

“This is no knock on Grand Rapids-area football, because I love it here,” Rohn continued. “But there’s something special about football in Muskegon. It’s a special place, and Mary Tyler is one of the reasons why it is a special place. She’d do anything for her grandkids and the teams they play on.”