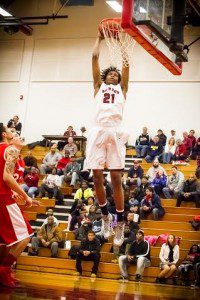 Muskegon junior center Deyonta Davis is set in 2015 to take the court for  Michigan State University.

But the way Davis is playing, the Spartans could probably use him now.

Davis, who has been on fire lately, turned back 10 shots Friday night in Muskegon’s 71-57 win over OK Black foe Grand Rapids Union in boys basketball action.

The Red Hawks were led by Jalen Arnold and Curtis Davison with 18 points each.

To see more of Tim Reilly’s photography from the game, click here.