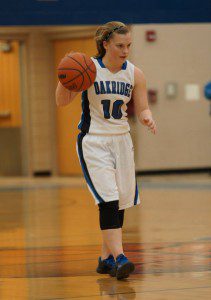 Giddings, who had 17 points and eight steals, became the all-time leading scorer in Oakridge girls basketball history with 1,370 career points. The previous record was held by Keyara Wiard, who had 1,363 points at the end of last season.

Giddings is also the all-time leader in assists and steals for Oakridge. She is in the top 10 in rebounds, as well.

“It’s nice that when it comes to a lot of situations, she has it figured out and she knows what to do,” said Oakridge coach Terry DeJonge of Giddings. “Before you can tell her what to do, she’s already heading that way, and I’ve been able to sit back like a fan at times this year.”

Oakridge lead at halftime 22-16  Whitehall rallied with a 12-4 advantage in the third quarter and led by four at the buzzer. But Oakridge finished the game strong with a 13-7 fourth quarter run to seal the win.

Hannah Reinhold added 11 points and six rebounds for the Eagles, who improved to 11-2 on the season and 8-0 in the conference.

The Vikings were led by Emily MacArthur’s 15 points and 12 rebounds. Jenna Pesch added nine points and Brandi Balzer was strong under the basket with 14 rebounds.

“We had an opportunity tonight for the win, but simple mistakes like turning over the ball led to our defeat.” said Whitehall coach Rachel Kent, whose team lost to Oakridge by 30 earlier in the season. “If my girls play like this the rest of the season we will win from here on out and I have a group of girls who truly believe in that.”

Nick Holt and his fellow MCC seniors will take another stab at a state baseball title, starting with Saturday’s districts