Lumberjacks learned about strength and dedication from six-year-old Gavin Sima, ‘the strongest kid in the world’

MUSKEGON – The Muskegon Lumberjacks have been playing good hockey lately.

They’re a much better team than they were just a few months ago.

But there’s more to it than that. 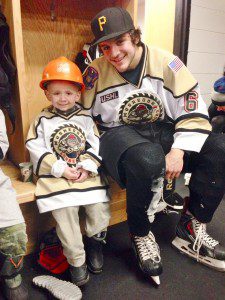 The team has started to display a remarkable “never say die” attitude that has resulted in several dramatic comeback wins over the past weeks.

Suddenly, after having been well out of the playoff picture, they are battling for the final postseason spot, with their last two regular season games this weekend.

So where is that extra intensity and determination coming from?

Lumberjack forward Jack Rowe might have put his finger on the answer when he came off the ice last Saturday, after scoring two amazing goals in the final 1:13 to force overtime and allow the Lumberjacks to eventually beat Lincoln in a shootout.

“We’ve had a couple humbling experiences the past couple of weeks, especially with the passing of Gavin,” Rowe said. “We’re playing for him. He’s in our hearts. We don’t want to give up on him, because he never gave up.”

Gavin was a very sick little boy who taught the Lumberjacks a big lesson about fighting to the end, even when the stakes are much higher than the outcome of a hockey game.

He had the chance to spend one fun day with the Lumberjacks, when he came out of his shell and attached himself to the hockey heroes who were giving him attention.

He was also able to attend a game that the Lumberjacks won in his honor. 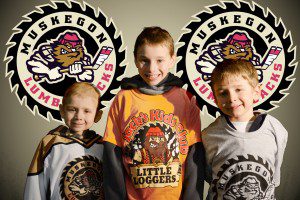 Gavin and his two brothers.

“It was just his story in general – how he’d been fighting this thing for three years,” said Lumberjacks defenseman Christian Wolanin. “He showed us the true meaning of strong – not hockey strong. He inspired us to keep going. We didn’t realize until we met him how small our problems really are.”

Gavin Sima, the son of Mike and Anita Sima of North Muskegon, was a six-year-old kindergartner who attended Reeths-Puffer schoools. By the time he met the hockey team he had been  battling leukemia for three years.

He came to the attention of the Lumberjacks in early March, when a team employee, Brittany Gonyon, mentioned him at a coach’s meeting.

Assistant Coach Rich McKenna was instantly moved, and decided he wanted to do something for the boy and his family.

McKenna arranged to have Gavin and his brothers come to the L.C. Walker Arena the following Monday. He told the players about the plan, and was hoping a few would show up to help, but he wasn’t holding his breath.

“We usually give the guys a day off on Monday, and we were coming off a three-game weekend,” McKenna said. “If it had come down to it, I would have hung out with Gavin myself. I just told the guys we have a little kid coming in, I gave them the background, and told them if they could find time in their day, I would love to have them there.

“I think everyone who didn’t have high school that day showed up.” 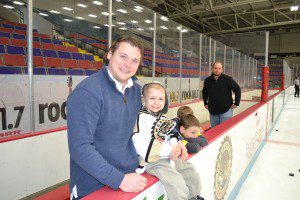 The players were instantly taken with Gavin and his brothers. They spent the afternoon making hockey sticks for the boys, showing them how to shoot, taking pictures and showing them around the rink and locker room.

Near the end of the day they had a pizza party, then the players put on their skates and jerseys and took the boys on the ice for a simple game of hockey. Each of the brothers had their name announced over the PA system.

Gavin started out rather shy, hanging on to his mother’s legs, but before long was totally in the spirit of things, according to McKenna.

“About 45 minutes into it he didn’t even realize his mom was there,” McKenna said. “She couldn’t believe it. She said he had never been like that before.”

Gavin took a particular interest in Wolanin, mostly because the defenseman wears the number 6 on his jersey, which coincided with Gavin’s age. The boy ended up going home with the name plate that hung above Wolanin’s locker, which included his number 6.

Wolanin replaced his nameplate with a new one that says “Gavin.”

“I told him he was the new number 6,” Wolanin said. “I gave him everything that I had with the number 6. I just wanted to take advantage of the opportunity I had that day to have a positive impact for him and his family. All the guys did a great job of brightening that day and making it special for him.”

Later that week, on March 14, Gavin and his family were the guests of the Lumberjacks at a game against Youngstown.

They brought the boy into the locker room to visit before the game, and couldn’t help noticing how different he looked, due to the rapid progression of the disease.

“You could see the turn of events in just a few days,” McKenna said. “All the guys were visibly upset before the game. They just said ‘Hey, we’re getting this one done for Gavin,’ and they did.”

The Lumberjacks won 5-1, and afterward skated to where the family was sitting and saluted them with their sticks.

“I think he slept the entire game,” McKenna said of Gavin. “He was a different kid from that Monday. Afterward his dad came down with him to say thank you, and there’s wasn’t a dry eye in the room. We had just won a huge game, we were pushing for the playoffs, but the guys were just sobbing.”

Gavin died a week later. The Lumberjacks were on a bus, headed for Indianapolis for a game against the Indiana Ice, when they received the news.

“I woke up and opened my phone and saw that Brittany had texted me,” McKenna said. “I think everyone in the organization had texted me – Gavin passed away. I decided I wasn’t going to tell the guys right away. He had really become part of the team. But through social media everyone found out right away.”

When they returned home the entire team attended Gavin’s funeral. Cooper Marody, a center, rose and spoke on behalf of the Lumberjacks.

“Just looking at him, seeing him smile – he just seemed so happy when he was with us –  he just touched your heart,” Marody said. “I just felt like I needed to say something and let them know how much he meant to me and our whole team. I wanted to make sure they knew he did make a big difference for us. He inspired us.”

Last Friday, before their home game with Omaha, the team honored Gavin with a moment of silence at L.C. Walker Arena.

Gavin’s spirit has been with the team since then. There are photos of him hanging in the locker room, and the players touch them every time they head for the ice.

Marody and several other players have Gavin’s initials on their sticks, along with a cross and the words “rest in peace.”

And, probably not by coincidence, they have been doing very well. They are 5-2-1 since they first met Gavin, and they probably played their best hockey of the season last weekend.

As a result the Lumberjacks have a one-point lead in the race for the fourth and final playoff spot in the Eastern Conference, with the last two regular season games this weekend.

“Everything we’ve been able to accomplish the past few weeks, deep down I think it connects back to Gavin,” Wolanin said. “The guys are hanging in there and pushing through, just like Gavin would have done.”

Even if the team misses the playoffs, McKenna is convinced the players will be better people for having known Gavin.

“Most of these guys will grow up to be dads one day, and they will remember this,” McKenna said. “It’s like I told Gavin’s dad – I will forever be a better father for having known him.

“We’re just grateful we had the chance to meet this little hero. He was the strongest kid in the world.”