Track and field is different from other sports in that competitors stand face-to-face, toe-to-toe and wish the entire field, with complete sincerity, “Good luck.” 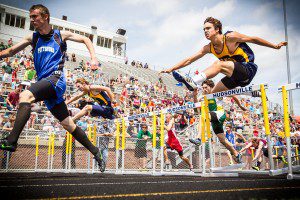 North Muskegon’s Jake Walton is one of the area’s top hurdlers and pole-vaulters. (Photo/Tim Reilly)

And then they run their tails off trying to beat each other.

And the pole-vault exemplifies that notion more than any other track event.

That explains why it was no big deal when Walton sought vaulting advice from Orchard View’s Len Burrington, an area authority on the fascinating and sometimes dangerous event.

“(Fellow North Muskegon track coach) Al Karaba and I encouraged him from day one, seek other advice,” said Clark.

“(Burrington’s) help his been big,” said Walton. “Plus, he lends me poles.”

Indeed, poles are another way pole-vaulting is different from other events.

But before we go there, let’s learn a little bit more about Mr. Walton.

Walton was your average seventh-grade pole-vaulter most of the season, eventually clearing 8-6 and earning enough confidence to do it again in eighth grade.

It was a smart move. 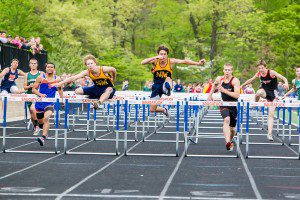 Walton, middle, last year at the regional meet. He made it to the state meet in the 110 meter high hurdles, but was disqualified in the finals after an errant hurdle caused him to leave his lane. (Photo/Tim Reilly)

Walton improved considerably a year later, blowing by the Fowlerville Middle School record, resetting it at 11-6. He admits he was hooked.

“I knew I was onto something,” said Walton. “I wanted to get better at it.”

Walton arrived in North Muskegon at the dawn of his sophomore year, and since then he’s done nothing but get better.

He’s become a pretty good hurdler, too, making it to the Class D state meet as a junior in the 110 meter high hurdles.

While the hurdle sprint ended in disappointment for Walton – he was disqualified when he ran around a hurdle as it was bouncing around in his lane, after being struck by another hurdler – the pole-vault was another story altogether.

Walton battled with Homer’s Gavin Towery for the state title, the pair blowing away the competition at 12-10 and battling up to 13-4. Neither could clear the next height, but because Walton had more misses on previous heights, Towery walked away a state champion.

Walton seems to relish the prospect of facing Towery again.

“It makes for good competition,” Walton explained. “Maybe it’ll just be the two of us again.”

Clark mentioned to Walton the morning of the Oakridge meet that he had to take advantage of the good weather. Every single spring sport athlete has had to deal with the worse spring in recent memory, with snow, brutal winds, and flooding plaguing every track through the second week of May.

“I mentioned to him that the weather was probably going to be the best he has competed in all year,” said Clark. “He already knew that and was excited for the opportunity.”

Actually, early in the competition Walton didn’t look like he had it in him.

“There are only a limited amount of good vaults a kid has in him on a particular day,” said Clark. Walton chose to start at 12-0, and it took him all three of his attempts to clear the height. He soon got into rhythm, though, and cleared, on his last vault, the school record by an inch. He cleared 14-5 on his first vault, and tallied two very good attempts at 15-0 before he ran out of gas.

“I truly believe the sky is the limit with Jake,” said Clark. “He has the training and now has the confidence to clear over 15-0.”

That brings us back to poles.

In order for Walton to make it over the bar at 15-feet, he’s going to need a little help. 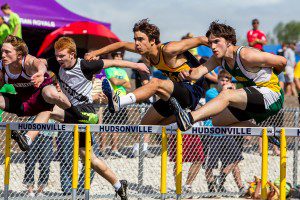 Walton has quite literally reached the physical limit to what he can do with his current 14-7 pole. Remember, as you lower your pole into the ground you lose around six inches of height. Do the math and you’ll see that Walton must propel his body up and over the remaining four inches, using a technique called the overhand grip.

Which is no easy feat.

“You don’t just switch a pole,” said Walton. “I’ve been working with two 15-0 poles. Right now, my equipment is maxed out, so I have to go longer.”

Frankly, Walton is just happy to be healthy so far into the season. Last year, he battled with shinsplints, necessitating long periods of rest in order to recover.

“It was so hard,” lamented Walton.

So, while most kids saw the poor weather this spring as a reason to complain and retreat, Walton actually has been excited to train this year injury-free.

“It’s been a little cold this spring,” said Walton with a laugh. “But I feel like I’ve more time to practice than last year, not being injured.”

And having Walton around, injury-free, this spring has been a benefit to the entire North Muskegon team.

“Jake Walton is a true leader,” said Clark, “not just by his excellent performances, but by the example he sets. With a smaller team, he helps keep the camaraderie positive.”

Later Clark added, “His teammates see Jake as a hard working practice athlete, and a true competitor when the meet starts.  He wants to do his best, every chance he has to compete.”

Baring any unforeseen weather ‘events’ or injuries, Walton is going to get a chance to do just that.

Now if he can just find the right pole.