With a leap, a swing of the arm, and a resounding smack, Zuidema makes her presence known. 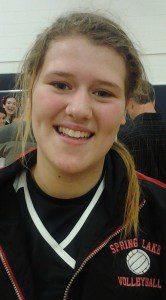 Spring Lake senior Kelsee Zuidema is set to have another dominant volleyball season.

The powerfully built senior, in her third year of varsity volleyball, demands a measure of respect on the court, particularly at the net. If opponents disregard her, she’ll make them pay with devastating power. If opponents plan for her, not much will change.

“When I step on the court, I want to be the best player I can be,” Zuidema said. “I love the adrenaline rush when you slam a ball down and there’s no way anyone can touch it. It’s just the best feeling in the world.”

The spike, a top-tier tool in Zuidema’s arsenal, has left more than one opponent slack-jawed over the years. Kill after kill; point after point, Zuidema continues to rack up an outstanding resume.

Now, in her encore performance for Spring Lake High School, the 17-year-old is poised to carry out one of the most dominating seasons of her career.

Despite her stature (6’0”) and unmistakable power at the net, Zuidema has worked tirelessly to broaden her skill set, making her one of the top finesse and back row players on the squad. Her 94 digs lead the team – a rarity for a player with such net presence.

“Kelsee is a powerful attacker,” said former head coach Sarah Bulthuis, who coached Zuidema through last season. “Her strength is having the vision of the blockers and ball placement during an attack. She knows when to tip, when to roll and when to hit with power.”

As intimidating as Zuidema is on the court, she makes her presence known in a different way in person.

A big smile and immediately handshake await anyone who meets her. Zuidema is, as her former coach Bulthuis says, “One of the happiest go-lucky girls I know.”

Not one to be confined or held down, Zuidema is a three-sport varsity athlete, with the potential to add a fourth. Despite playing volleyball year-round, Zuidema manages to pack in basketball and softball, and, if all goes well, plans on playing tennis in the spring as well.

But for now, Zuidema and her Laker crew are focusing on volleyball. Last year Spring Lake set a school record with 44 wins and captured a district championship before falling to Grand Rapids South Christian in regional finals.

Although Zuidema, an outside hitter, is the only returning starter from last year’s team, first-year head coach Anita Perkins believes the past could repeat itself this season.

“The entire squad is looking forward to a good season and hopes to compete at a high level to work toward a Lakes 8 Conference championship and also to defend their district title,” she said.

Zuidema is currently undecided on her college choice, although she would like to attend Grace College (In.) to play volleyball and study business. She is yet to receive an offer from the NAIA school, but plans on committing if she does receive one.