The Montague girls basketball team won its 10th game of the season with a 45-37 victory over crosslake rival Whitehall on Tuesday.

The 10 wins equals the Wildcats’ victory total from the last three seasons combined. 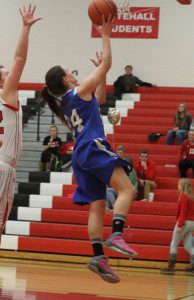 Montague’s Kenadee Shugars goes in for the layup. Photo/Scott Stone

Kenadee Shugars provided a first-half spark for Montague (10-6, 8-4) with 10 of her 12 points and added five steals on the night.

“She (Shugars) is the sixth different kid to lead us in scoring this season,” said Montague coach Brian Beebe. “We are doing a good job of feeding the hot hand.”

“Our post players did a very good job on McArthur. There was a lot of focus toward her and we did very good defending her tonight,” said Beebe. “(Katie) Webster guarded her (McArthur) and did a great job contesting as many shots as she could.”

Montague sophomore forward Emma Flagstead also stepped up inside with five blocks. Her six points all came in the third quarter. 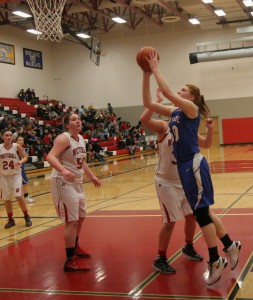 Emma Flagstead goes in for two of her six points on the night for Montague. Photo/Scott Stone

“We’re still adjusting to missing our leading scorer (Chase) Jancek who is out for the season with a torn ACL,” said Beebe. “We’ve responded well after last week’s tough lopsided loss to Spring Lake.”

MacArthur also had 11 rebounds for the Vikings.