MUSKEGON – Apparently nothing will keep Ralph Monday off the basketball court.

The second-year star of the West Michigan Lake Hawks had plenty of good reasons to take a break this season, but refused to be distracted.

He kept playing despite suffering a painful wrist injury. 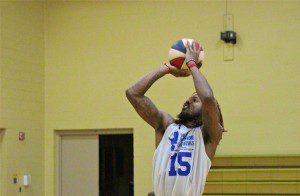 He kept playing despite four deaths in his family over the course of the season, including the tragic shooting death of his younger brother in February.

None of that is surprising, considering what basketball has meant to Monday.

He grew up in a rough neighborhood in Los Angeles and found himself on the wrong side of the law several times. He finally decided to use his basketball talent as a one-way ticket away from trouble.

“It was real bad,” said Monday, 26, about the area where he grew up. “I watched one of my best friends get shot in front of me. There were a lot of gangs around me, stuff like that. It was kind of hard to avoid.

“I think I was just really blessed to get out of that situation through basketball.”

Monday will be on the court Saturday at Reeths-Puffer High School, when the Lake Hawks begin the 2015 American Basketball Association playoffs against Oakland County at 6 p.m.

The ABA playoffs have a single-elimination format, like a college or high school tournament. If the Lake Hawks win Saturday they will advance to the North Central Division Final Four. It would take eight consecutive wins for the team to win the ABA title.

“I think we have the potential to go all the way, or at least make the final four,” Monday said. “We have a lot of talented players. When everybody gets it going the sky is the limit for us.”

Bumps along the way

Monday grew up in the Watts neighborhood in Los Angeles, which in notorious for crime and violence.

Basketball gave Monday a way out, but there were bumps along the way.

As a kid his sports were football and baseball. He didn’t start playing basketball until his junior year in high school. But his talent was obvious, he started right away and earned All-Conference honors.

He earned a scholarship to Northeastern State University in Oklahoma, then transferred to a college in Nebraska. But Monday encountered problems with the law in Nebraska, left the school and went home.

He spent two years back in his old neighborhood, where there was more trouble to be found. The resulting probation from one incident has kept him from playing overseas, where a lot of other minor league pros have made a lot of money.

“I was going down the wrong path, in and out of jail a few times, and my mom talked me back into playing basketball,” Monday said. “She said that was the best chance for me.”

Monday had the good sense to listen to his mother.

He enrolled at Bethesda University of California, where his basketball career finally took off. He became a team and conference most valuable player and set single-game school records for points (41), rebounds (24), assists (12) and blocks (7).

By the time he was done he was named a National Christian College Athletic Association All-American.

Monday decided he wanted to play pro basketball, so he showcased his talents at the Global Basketball Summer League in Las Vegas in 2013.

That’s how he first made contact with the Lake Hawks and ended up in Muskegon.

Helping on and off the court

Monday has been a driving force for the Lake Hawks since he arrived for the 2013-14 season.

He’s an all-around player who can shoot from the outside or pile up points in the paint. He also plays great defense and is among the league leaders in rebounding and blocked shots, despite his rather smallish (by pro standards) 6-6 frame.

As Lake Hawks Coach Ronald Jenkins puts it, “He is small, but he plays big.”

“What can I say about Ralph – he’s an all-around athlete,” Jenkins said. “He plays inside and out for us. He has nice outside touch but he’s very strong and aggressive inside. He plays a Dennis Rodman type of inside. He has that desire to rebound.

“His heart is in whatever it takes to help the team.”

Monday has also been trying to make a difference off the court in Muskegon.

He helps with youth basketball camps at the Muskegon YMCA, where he is also employed. He’s gotten to know a lot of young people in the area and has tried to be a positive influence

He’s not sure where his pro basketball career will take him in the future, but he knows he eventually wants to work with children and young adults.

“I enjoy being a positive figure for kids here,” Monday said. “Muskegon kind of reminds me of where I came from.

“When I was growing up my dad never came to any of my games. I think having a positive male figure is important for boys, especially these days. I think a lot of kids here in Muskegon have taken to me.

“My ultimate goal is to make enough money for my family to live comfortably, and to start up a non-profit that’s dedicated to working with young people. I want to focus on helping kids.”

Jenkins is happy to have a player with that sort of community spirit on the Lake Hawks roster.

“He’s a lovable young man who will do anything for anybody,” the coach said. “We’re proud to have someone of his caliber on the team. He’s one of the faces of the Lake Hawks organization.”

Monday has been playing with a painful wrist injury that occurred earlier in the season when he hit the court after completing a dunk.

“That’s nothing that will stop me,” said Monday, who added that he also finished a college basketball season while playing with a broken bone in his foot.

“I deal with pain pretty well. It doesn’t affect the way I play because it’s my left hand, and I don’t shoot with my left hand. I can still do layups and dribble. There are times, when I don’t have it wrapped up, that it’s extremely painful.”

That kind of pain is nothing compared to the inner grief that Monday has experienced this season.

Over the months he received word that his grandmother, an uncle and a cousin had passed away.

Then last month came the horrible news that his 23-year-old brother, who lived in California, was shot to death.

“We grew up together and spent a lot of time together,” Monday said. “From what I hear he got shot at a store in some sort of gang-related act.”

After so much tragedy, nobody would have blinked if Monday had left the team for a while to spend time with his family and regroup emotionally.

“One night, right before game time, when we were ready for warm-ups, Ralph came out of the locker room with tears in his eyes,” Jenkins said. “I tried to figure out what was going on, and he said ‘Nothing, I’m okay coach.’

“Then they told me he found out his grandmother had passed. I told him to go ahead and take the day off. He said no, he needed to be in the game. A lot of young people need something to fall back on. For him it’s basketball.”

Monday admits that the sport helps him deal with the tragedies.

“It’s hard – it’s been up and down for me,” he said. “It’s more difficult when I’m not playing. That’s when I have all the time to think about it.”

Monday also refuses to be sidetracked from his effort to be the best player he can be. He won’t let anything – even family tragedy – stand in the way.

“I’m trying to live a dream, and if I slip up I could miss out on that dream.”