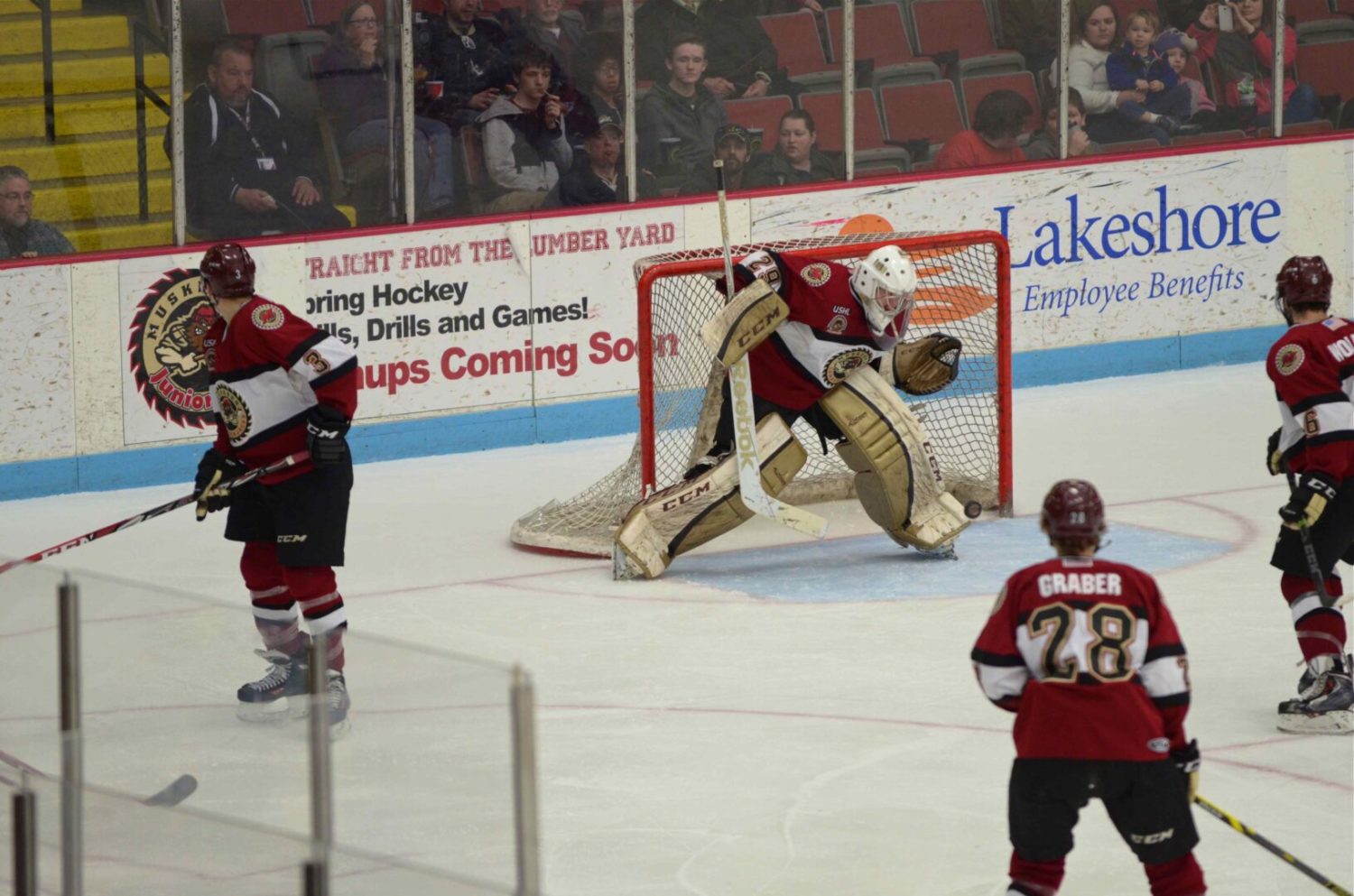 They not only set a franchise record for wins in a season with 32, but clinched a spot in the Clark Cup playoffs for the first time in two seasons.

Eric Schierhorn sticks the puck away to his defensemen during first period action. Photo/Marc Hoeksema

Entering Friday’s game the Lumberjacks needed a victory, combined with losses by Chicago and Bloomington, to secure a playoff spot.

Everything fell into place perfectly.

Muskegon is now 32-18-4 on the season, good 68 points and a third place tie in the USHL’s Eastern Conference.

The victory was the third in a row for the Jacks, who will host Des Moines again on Saturday night at 7:15 p.m.

Will Graber controls the puck for Muskegon. Photo/Marc Hoeksema

“We’re excited, (getting in the playoffs) was a preseason goal,” said Muskegon Coach Todd Krygier. “You don’t have a chance to win the cup if you don’t get in the playoffs. I’m happy. I like the way the team has played and the progress that we’ve made.”

Making the playoffs was a very big deal for the Lumberjacks, who missed out on the postseason a year ago by losing the final regular season game.

“Going to the last game like that and losing was tough on the guys,” said Lumberjack forward Matheson Iacopelli. “We worked hard all summer and came back this year ready to make the playoffs.”

“It’s nice but the work’s not done yet,” Schierhorn said. “We’ve got to keep building toward the playoffs and we’ve got to carry out good play. Just because we clinched, we’re not going to sit back, we’re going to put the pedal to the metal.”

Christian Wolanin looks up ice with the puck. Photo/Marc Hoeksema

The Jacks were in control from beginning to end in Friday’s game.

Griffen Molino opened the scoring for the Jacks with a breakaway power play goal at 14:14 of the first period.

Matej Paulovic blasted a slap shot from just inside the blue line past Buccaneers goalie Ryland Pashovitz at 1:22 of the second period to give the Jacks a 2-0 lead. Molino and Christian Wolanin assisted on the goal.

Mark Petaccio connected on a 2-on-1 breakaway goal at 4:09 of the second period to give the Jacks a 3-0 lead. Iacopelli picked up the lone assist on the transition goal.

Wolanin added a goal at 10:26 of the second, giving the Jacks a 4-0 lead. Robbie DeMontis and Joseph Cecconi assisted on the goal.

No. 17 David Keefer gets hooked by Des Moines’ Liam McGing while No. 18 Tyler Drevitch watches for the puck. Photo/Marc Hoeksema

The Buccaneer’s Ara Nazarian put Des Moines on the board with a goal at 13:48 of the second period to cut the deficit to 4-1.

Iacopelli blasted a shot from the right faceoff circle at 11:05 of the third period to give the Jacks a 5-1 lead. Bo Hanson assisted on the goal.

Schierhorn stopped 28-of-29 Buccaneer shots to collect the win for the Lumberjacks.