WHITEHALL – Whitehall High School has been producing great wrestlers for years, and this season is no exception.

A total of seven Viking grapplers have qualified for this weekend’s Division 3 individual state finals at the Palace of Auburn Hills, with opening-round matches getting underway Thursday. 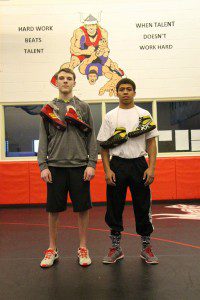 Twenty other wrestlers from area schools will also be competing in various divisions.

Whitehall Coach Cliff Sandee said he’s had as many as 10 wrestlers quality for state in one season, but the Vikings typically send seven or eight.

Leading the charge for the Vikings are a pair of wrestlers who won regional championships two weeks ago, and both are still juniors.

Reiley Brown will be making his third straight trip to the individual finals and will compete at 125 pounds, while Jwan Britton is making his second trip while fighting for a championship at 135.

Although a state crown won’t be handed to him on a silver platter, it could be Brown’s time to rule his weight class. He left the Palace heartbroken as a freshman and sophomore, finishing  second in 2013 and third in 2014.

“I’d place a healthy wager that there’s nobody in his weight class this weekend that’s spent more time on a wrestling mat than Reiley has,” Sandee said. “He’s probably got around 150 matches under his belt in the off-seasons alone.”

Brown (44-2 this season) will open the tournament against Essexville Garber’s Charlie Newton.

Just how important is the sport to Brown? His family’s addition to their home included a wrestling room, providing Brown with more mat time to perfect the science of the sport.

Brown established himself as one of the favorites to win a state title in December, when he stood out at the fiercely competitive Goodrich Tournament of Champions.

“When he won those matches, we knew what we were getting this year out of him,” Sandee said.

Brown and Fenner could be on a crash course to meet in Saturday’s championship round, as they are currently ranked No. 1 and 2, respectively, in the weight class.

Sandee also has high hopes for Britton, the nephew of former Whitehall assistant coach Jason Johnson, who also starred on the mat for the Vikings.

“The greatest thing going for Jwan is his confidence. He could be facing an Olympic gold medalist, and he thinks he’s the better wrestler.”