MONTAGUE – Coach Doug Rice will be the first to admit that his Montague varsity softball team wasn’t performing like a championship-level squad in April or early May.

Strangely enough, for the Wildcats to realize their potential and eliminate the errors that had been plaguing them, all they needed was to witness the pregame routine of a quality opponent. 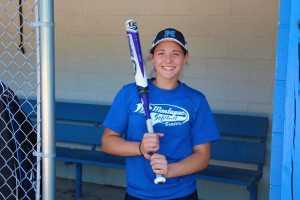 Montague’s Kenadee Shugars has led her team to the state semifinals with her arm and bat. Photo/Jason Goorman

“Mona Shores was out at our place (on May 22), and believe it or not, we stood and watched what they did defensively during their pregame warmups,” Rice said.

“It was really eye-opening. (Mona Shores head coach) Jason Crago has done such a great job with that program and watching his girls do their thing and their attention to detail was awfully impressive.

“After that, we talked about the errors and I told them I was tired of it,” Rice added. “I really came down hard on them. There was no sugar coating things. If we wanted to be successful, things had to change.”

At that point the Wildcats started to play like they witnessed Mona Shores practice – with energy and purpose.

Now three weeks later, the Wildcats have reached a level that nobody anticipated. Despite their 23-12 record, which is a bit below par for a final four team, they will play in the Division 3 state semifinals Friday against Bronson (37-7) at Michigan State University at 5:30 p.m.

The winner will advance to Saturday’s state championship game at MSU at 5:30 p.m., against the survivor of the Monroe St. Mary’s Catholic/Pinconning semifinal.

The Wildcats really started to hit their pace June 1 with a thrilling 5-4 victory over West Michigan Conference rival Ravenna in the Division 3 district semifinals at North Muskegon.

“That was a turning point because we had lost to them twice in the regular season,” said Montague senior pitcher Kenadee Shugars. “When we beat them, we began to believe we could beat anybody.”

Later in the day, that mindset continued, as Montague surged past host North Muskegon to claim the district championship for the second year in a row.

A week later, the magic continued, with the Wildcats riding a balanced hitting attack and an outstanding pitching performance from Shugars to beat Manton and Morley-Stanwood in regional action at Newaygo High School.

Shugars struck out 20 in the two games while the vastly improved Montague defense committed only one error.

Shugars continued her heroics in Tuesday’s 5-2 victory over Traverse City St. Francis in the state quarterfinals.

The 5-foot-3 bundle of energy cranked a first-inning home run that Rice estimated traveled over 225 feet. She later added an RBI double and knocked in three runs in the game.

“You don’t want to get into a flex off with her, because she’ll put you to shame,” Rice said with a laugh. “Kenadee is just as athletic as they come.”

In the pitching circle, Shugars allowed only three hits and one walk, while striking out seven.

Rice calls Shugars unflappable on the mound, and says he has the utmost confidence that she can work out of any jam. She escaped unscathed from a pair of bases loaded situations against St. Francis by buckling down and getting key outs.

“She says she doesn’t hear anything when she’s out there, and I believe her,” Rice said. “Her focus is incredible, and that’s something I talk about with the girls on occasion.”

“I’ve always got butterflies before I pitch,” Shugars admitted. “I’m just happy I don’t throw up before the game. But after I get an inning or so in, it just feels like any other game and do what feels natural.”

Rice said he became somewhat emotional after the win over St. Francis when the full magnitude of what his squad had accomplished began to sink in.

“You begin to realize that those girls just did something that’s never happened here, and I’ll soon be coaching a game on MSU’s field,” he said. “It’s a special feeling.”

Rice said he knows a thing or two about Bronson, the semifinal opponent, and the talent of that team’s star pitcher, Skyler Sobeski, who allowed just one hit in the Vikings’ quarterfinal win over Grand Rapids West Catholic.

“She only struck out three, which means they also have an excellent defense behind her,” Rice said. “But I think that bodes well for us, because we have a lot of tough outs in our lineup. One through nine, our lineup is capable of putting the ball in play.

“It’s our goal to reach the state championship. We’re not content on just being there.”