MSUKEGON – When Matt Schmitt returned to soccer with the Muskegon Risers, playing was not part of the plan.

He was going to be the quiet owner of the new professional team, standing back while the staff ran the business operation and the coaches ran the team. 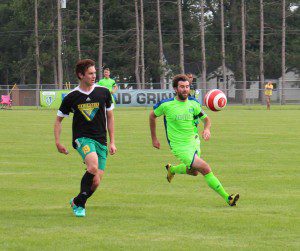 Nobody was supposed to notice Schmitt very much, which was just the way he wanted it.

But about a month ago the Risers coaching staff turned to their owner with a unique request. They needed another forward to join the squad, and Schmitt had the necessary qualifications.

It took some talking, but the coaches finally convinced the 27-year-old former Reeths-Puffer All-Stater and University of Michigan standout to relinquish retirement and play on his own team.

So far the experiment has worked out very well.

Schmitt has played in three games for the Risers, including last Saturday’s 2-1 victory over Detroit Waza Flo, and has one goal. He says he’s having the time of his life and wants to keep playing beyond this season, if the coaches will have him.

He’s scheduled to play his fourth game on Saturday when the Risers, now  6-3-1 overall and 6-0-1 at home, host Oakland United at 6 p.m. at Reeths-Puffer High School.

The team has four games remaining on its schedule, with home games each of the next three Saturdays.

“The coaches approached me about halfway through the season needing some personnel,” Schmitt told Local Sports Journal following last week’s game. “By that point the team had started operating itself, so I came into training and showed well and they offered me the spot.

“I told them ‘no’ about three times. I wanted to make sure I was respecting all the work the teammates had put in, but they approached me as well and wanted me to give it a shot.”

Schmitt is filling the role of “target forward,” which means he helps set up developing plays for the big scorers on the team.

“It involves checking back to the ball and holding it up for (scorers) to get back into the attack,” Schmitt said. “It was a role I played at Michigan my junior and senior seasons. We had guys (on the Risers) doing a good job at that position, but this opens guys up to do the things they do best.”

There was a time, a few years back, when Schmitt dreamed of playing professional soccer when his collegiate career was over. But a series of injuries convinced him to use his U-M degree and jump straight into the business world, rather than test his fate at the pro level.

“I had three sports hernias develop before my senior season, ” he said.

But Schmitt has been staying in game shape, playing soccer at lower levels, and says the conversion back into heavier competition has been easier than he expected.

“The love of the game never leaves you,” Schmitt said. “I played since I was five, and to be out there and enjoy these types of wins is just fun. I hope the coaches outrecruit me (and fill the roster spot with a better player in the offseason), but I’m going to go into the offseason with the mentality that I can still play ball next year.”