MONTAGUE – After a hugely disappointing 2-7 season a year ago, the Montague Wildcats are calling this season “the year of redemption.”

So far, they’ve redeemed themselves twice, with convincing wins over Orchard View and Ravenna. Those happen to be two squads that beat the Wildcats last year. 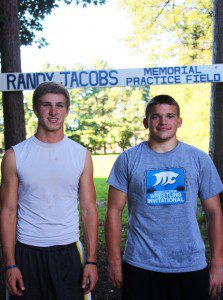 “And Friday will be an opportunity at Redemption No. 3,” said Montague senior quarterback Jacob Buchberger, referring to Shelby, the Wildcats’ opponent this Friday, which defeated Montague 46-30 last year.

“A lot of us felt that we let some fans down from last season, but really, we’re not focused on last year anymore,” said senior running back Cameron Brayman. “We feel like last year didn’t even happen.”

Collins secured his 100th career coaching win at Montague with Friday’s triumph over Ravenna.  While he said his team is more experienced, stronger and bigger than last year, Collins added that the players’ mental approach has helped erase the bitter taste of 2014.

“This group of kids came together and decided they wanted to make a change,” Collins said. “That meant changes in the amount of work they did in the weight room, the (work in the) offseason, the leadership.

“And this hyper-focused group of kids came into this season wanting to make a statement that they were ready for some different outcomes. And the only way to get different outcomes is to do things differently. And they have with all the things I’ve mentioned.”

But the way the Wildcats have jumped out of the gate this fall has been particularly surprising, mostly because they’ve  been lighting up the scoreboard.

Montague scored a total of 196 points in nine games last year. Through two weeks this year, the Wildcats have already tallied 105.

More than half of those points came last week in the Wildcat’s 70-48 victory over Ravenna, a playoff team last year and one of the preseason favorites in the West Michigan Conference this fall.

Buchberger and Brayman have had a lot to do with the offensive outburst.

Four of his touchdowns came last week against Ravenna, when he rushed for an astounding 252 yards.

Brayman is having a breakout season, rushing for 278 yards and seven touchdowns.

Both of the standouts had high praise for the offensive line that opens the holes in front of them.

“The line really has been a huge help,” said Brayman, who rushed for 120 yards and three touchdowns against Ravenna. “They’ve been dominating up front.”

“Our linemen are really helping us take the next step,” Buchberger said.

Both Buchberger and Brayman said upcoming tilts against West Michigan Conference rivals Oakridge and Whitehall are circled in red ink. But at the same time, they’re focused on not looking too far ahead.

“One week at a time,” Buchberger said. “Making the playoffs is a goal, but we can’t look that far ahead. We just need to think about being 1-0 in the week ahead instead of trying to accomplish everything at once.”

LSJ Spotlight Games Week 7: Three interesting matchups with a lot on the line

Reeths-Puffer races to the top of the field, wins girls city track meet