Off the field, the teams worked together to fight cancer in a very personal way.

Reeths-Puffer scored a 1-0 victory over the Sailors, improving to 4-4 on the season and 1-1 in the O-K Black Conference. 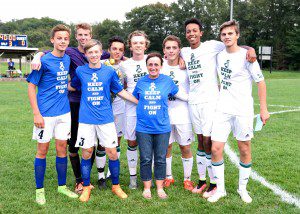 But the bigger story was how the two rival squads came together to salute a Mona Shores teacher who is battling cancer, and raise money for an organization that helps the families of local cancer patients.

The effort was inspired by Heather Sturr, who is currently battling colon cancer. She’s an elementary art teacher in the Mona Shores district and the mother of Connor Sturr, a senior on the Sailor soccer team.

Six players from Reeths-Puffer and one from Mona Shores, who all play on a travel soccer team with Connor Sturr, presented Heather Sturr with flowers during Thursday’s game.

Fans from both schools also helped raise money for a local organization called Andy Cross – Whatever It Takes, Inc., which works with local families that are struggling with cancer. 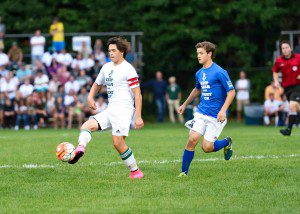 With Anthony Sowles on his heels, Reeths Puffer’s Noah Sorn passes the ball to the outside. Photo/Eric Sturr

Special tee-shirts were sold at the game, with the proceeds going to the Whatever It Takes group. The organization is run by Jenny Cross, whose husband Andy died of cancer.

“We thought we’d do a cancer game. We did one (three years ago) against Puffer, when Puffer set it up. We did one of those and thought, why not let’s do another. They were great.”

When he heard about Apostle’s idea, R-P coach Keith Knapp was more than happy to take part.

“We hosted a purple night three years ago. We had some players on our team who had a friend who was battling cancer at the time, so it was very personal to them,” Knapp said. 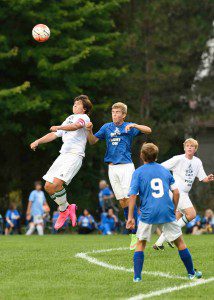 “When Mike (Apostle) contacted me about doing to same thing because they have someone with whom it’s personal as well, we thought we’d be glad to help. It’s just great stuff.”

On the field, most of the first half was back and forth, with each team having scoring chances but coming away empty.

Reeths-Puffer broke the deadlock with 40 seconds left in the half when senior Noah Sorn launched a centering pass to junior Drake Fox, who beat the Sailor defense and blasted the goal from the keeper’s right side.

“We’ve found over several games that we have to start early and we’ve got to finish well,” Knapp said. “We’ve got to play right up til the end, we learned that on Tuesday, losing the game with less than three minutes to play (against Grand Rapids Union).”

“The guys always look forward to playing Mona Shores, partially because they’ve got friendships on the other side. We know it’s going to be great competition, we’ve got great history between our schools.

Sport Clips Game of the Week: Hesperia can clinch first 9-0 season since ’86 by beating North Muskegon 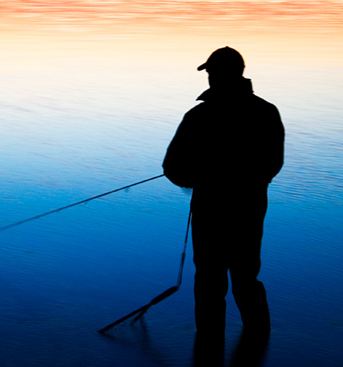