MUSKEGON – The Muskegon Lumberjacks were concerned about how they were going to fare playing four games without top scorer Rem Pitlick.

As it turned out, it wasn’t so bad at all.

The Jacks held their own, going 1-1-2 during Pitlick’s absence for a .500 record against two first-place USHL teams.

The Pitlick-less period ended Saturday with the Jacks losing a late one-goal lead, then falling to the first place Cedar Rapids RoughRiders 4-3 in a five-round overtime shootout. 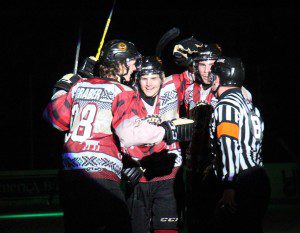 No. 28 Will Graber celebrate with his teammates after scored his team’s third goal. Photo/Jason Goorman

Pitlick, who has been playing with a U.S. junior team in an international tournament in Canada, will be back when the Jacks host Youngstown on Dec. 29.

“He’ll (Pitlick) be back after the break,” said Lumberjacks Coach Todd Krygier. “It’s a grind, the guys have been going hard so (getting a break) is good.”

The RoughRiders trailed Muskegon 3-2 late in the third period, then forced overtime with a goal with 50 seconds left in regulation.

The seven-minute overtime was scoreless, then the RoughRiders outscored Muskegon 3-2 during the shootout.

The Lumberjacks, who got a point in the standings in the overtime loss, are now 11-9-3 on the season. They had a good weekend against Cedar Rapids, getting three of four possible points after beating the RoughRiders on Friday.

Muskegon, which came into the game without a shorthanded goals, scored two goals one man down.

The Lumberjacks opened the scoring with a shorthanded goal. Will Graber buried the puck from the left side into an open net on a rebound from a Chris Klack shot at 15:06 of the first period. 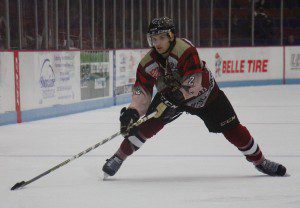 No. 2 Mitch Eliot gets ready to shoot the puck just before the Lumberjacks score. Photo/Jason Goorman

The Roughriders tied the game at 1-1 just 16 seconds into the second period on a goal from Luke Morgan.

The Jacks responded with another shorthanded goal 2:27 into the second period from the left faceoff dot by Robbie DeMontis.

The RoughRiders’ Sam Sternschein tied the game at 2-2 with a goal 9:36 into the third period.

Graber gave the Jacks the lead back with his second goal of the evening at the 13:37 mark of the third period. Mitch Eliot and Bo Hanson assisted on the tally.

Cedar Rapids pulled its goaltender for an extra skater and converted with a goal from Zac Robbins with 50 seconds left in regulation.

Both teams went into overtime for the second consecutive night, but the seven minute extra session was scoreless.

The Jacks took the lead in the second round with a strike from Collin Adams, but Jacob Hayhurst responded in the third round with a goal, forcing a sudden death round.

Cedar Rapids put the game away in the fifth round with a goal from Johnny DeRoche.