Lumberjacks blow a late lead, fall to Bloomington 3-2 for yet another home loss

After all, the Jacks were still a game under .500 in Muskegon, and hadn’t won back-to-back home games since early December. 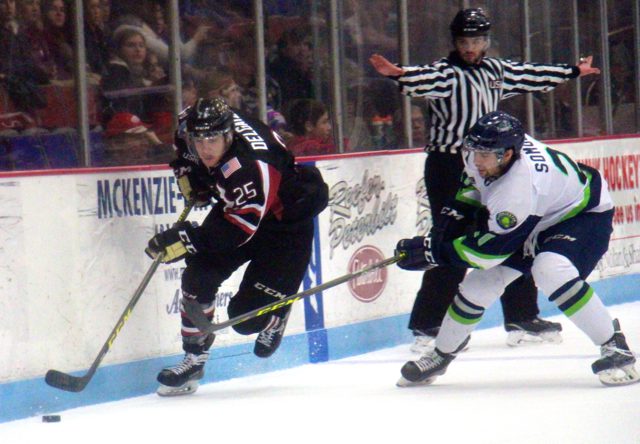 Anthony Del Gaizo takes the puck up the boards against Bloomington’s No. 21 Ethan Somoza. Photo/Jason Goorman

The Lumberjacks made a valiant effort on Saturday to improve those statistics, but gave up a late lead and fell 3-2 to the Bloomington Thunder in a penalty-filled contest in front of 2,409 home fans.

The Jacks overcame an early deficit and led 2-1 after two periods, but gave up two third period goals, including the tie-breaker by Bloomington’s Logan Lambdin with only 1:37 left in the game.

Lambdin had recently returned to the ice following a 10-minute misconduct penalty he earned in a multi-player scuffle.

Rem Pitlick, the Lumberjacks’ and the league’s leading scorer, received a misconduct at the same time, keeping him off the ice for 10 valuable minutes when the game was on the line.

That fact did not please Krygier.

“The best player in this league (Pitlick) gets jumped in the corner by a guy and the ref says he wants to send a message, so he gives Rem 10 minutes and them 10, and Rem did not know what the hell is going on,” the coach said. “It’s an absolute disgrace.” 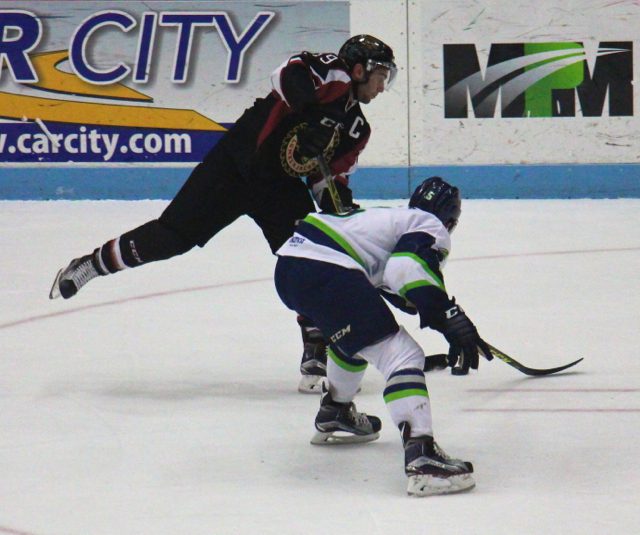 There were some things to like about the Lumberjacks’ performance.

They managed to kill 5 of 6 Bloomington power plays, which is pretty good considering the Jacks are the league’s worst penalty-killing team.

Unfortunately the one shorthanded goal they gave up came early in the third period, which tied the game at 2-2 and set up Lambdin’s winning goal.

Muskegon failed to capitalize on any of their five power play chances. That included a 5-on-3 advantage early in the third period.

Bloomington scored and tied the game shortly after that.

But the Jacks still fell to 15-17-4 and remained in at least a tie for last place in the USHL’s Eastern Conference.

“We need to work on execution, focus, determination and the willingness not to be denied,” Krygier said. “You give up a third period lead and that should not happen and it is everybody’s fault, from the goalie to the defense and the forwards.”

The Thunder opened the scoring with a goal from Tarek Baker at the 3:08 mark of the first period. 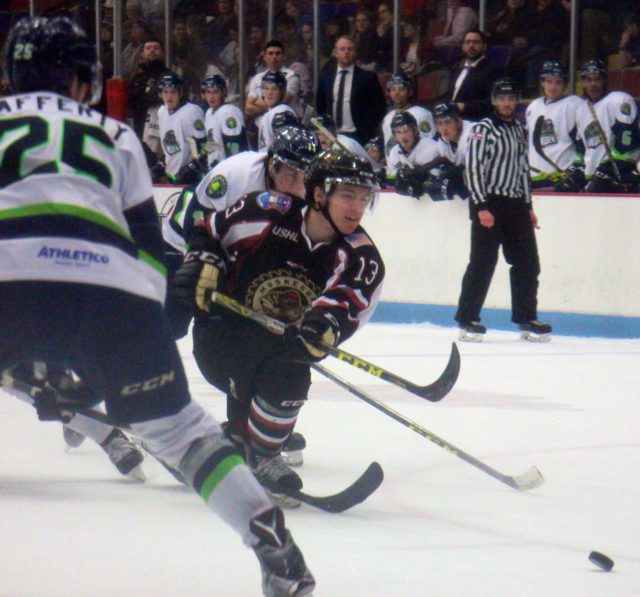 Collin Adams tries for the near range shot in the third period. Photo/Jason Goorman

The Lumberjacks responded with a goal from defenseman Grant Gabriele on a slap shot from just inside the blue line at 10:48 of the second period. Mitch Eliot and Anthony Del Gaizo assisted on the game tying goal.

Pitlick scored his 26th goal at 15:33 of the second period to give the Lumberjacks a 2-1 lead.

Bloomington captain Jake Slaker tied the game at 2-2 with a goal at 4:33 of the third period.

That set up Lambdin’s game-winning goal at the 18:23 mark.

There were 70 total penalty minutes in the contest, with Muskegon being whistled for 36 minutes and Bloomington for 34. 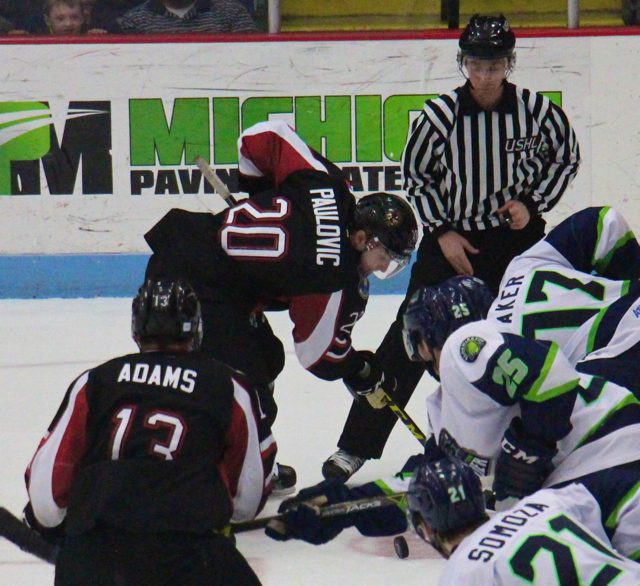 Matej Paulovic wins the faceoff and gets the assist on Rem Pitlicks 26th goal of the season. Photo/Jason Goorman 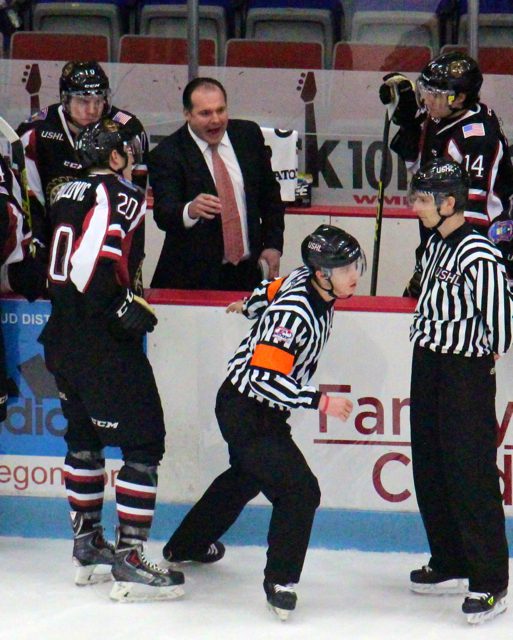 Muskegon Lumberjacks coach Todd Krygier expresses his dissatisfaction after a questionable penalty call that led to a Bloomington goal to tie the score. Photo/Jason Goorman 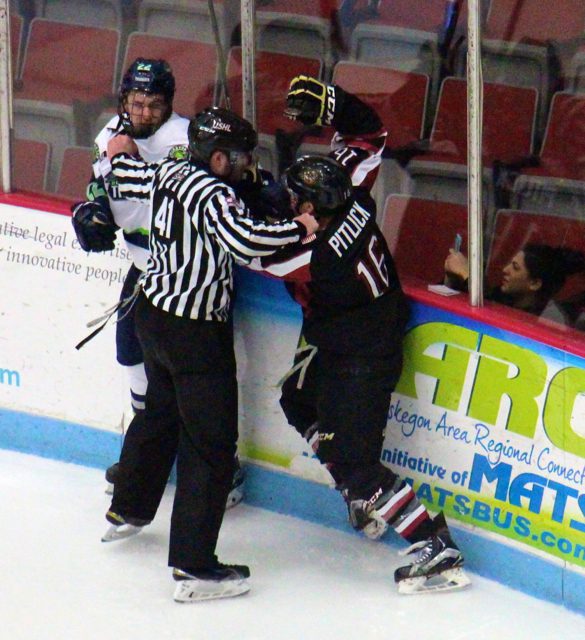 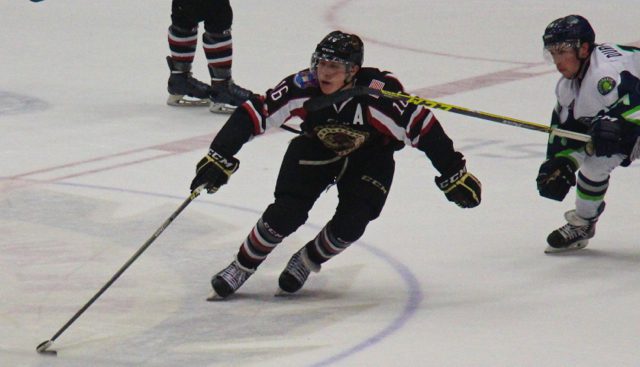 Rem Pitlick tries to control the puck while getting a stick to his throat. Photo/Jason Goorman 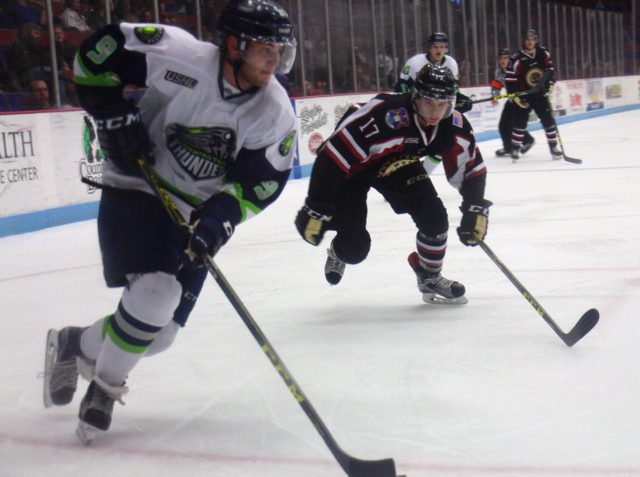 Evans has a big day at the plate, leading Whitehall’s sweep of Mason County Central