MONTAGUE – The only things that have stopped the Montague football team so far this season have been odd circumstances.

A week after having a game stopped at halftime against injury-stricken Shelby, the Wildcats had Friday’s matchup against

There was still 3:11 left in the game when the referees stopped play, but Montague had already taken control and left the field with a 34-0 West Michigan Conference victory.

The Wildcats are now 4-0 on the season, including 3-0 in the league.

While he was happy to get another win, Montague Coach Pat Collins couldn’t help but shake his head at having games end early for two straight weeks.

“It’s been a weird couple of weeks,” Collins said. “Not playing full football games is kind of weird for us. Someone asked if I’d ever seen that (a game called due to injury) before, and I said no.

“We’ve played a game that was delayed by lightning, but we’ve never ended a game due to lightning – at least I haven’t. We’re just happy we got out of here with a win and we’re ready to go into next week.” 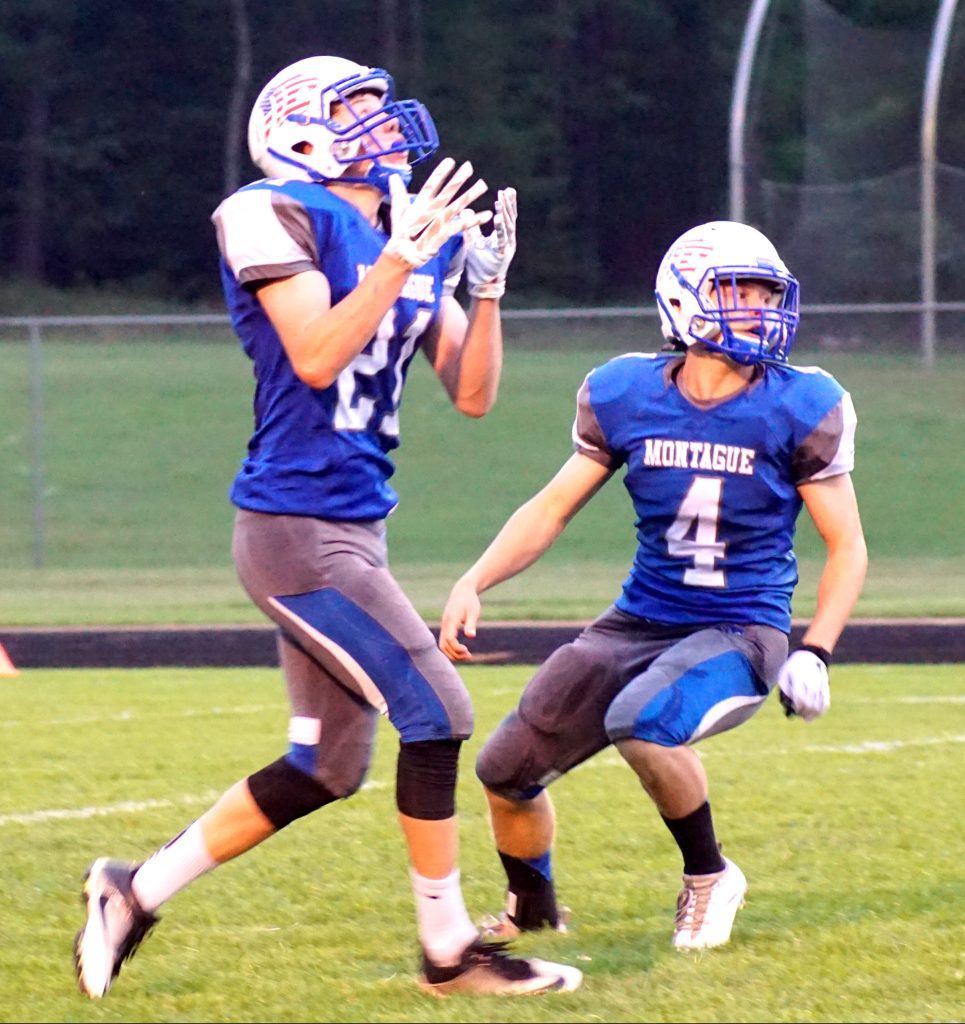 Montague punt returner Kenyan Johnston waits for the return as No. 4 Sebastian Archer gets ready to block. Photo/Leo Valdez

Next week will be a showdown with archrival Whitehall in Whitehall.

This week, Mason County had no answer for the balanced attack that Montague brings to the table. The Wildcats had three players with over 100 all-purpose yards.

Stark kicked off the scoring with a 14-yard run up the middle in the closing minutes of the first quarter to cap a nine-play, 70-yard drive.

Late in the second quarter, Stark put Montague on the board again with a 3-yard blast to make the score 14-0 at halftime.

On just their second play of the second half, Stever hit sophomore Kenyan Johnston with a screen pass on the left sideline. Johnston sprinted the rest of the way for a 73-yard touchdown reception, putting the Wildcats up 21-0.

On the first play from scrimmage on the next drive, Spartan quarterback Ty Sniegowski was intercepted at the Montague 48-yard line by sophomore Sebastian Archer. 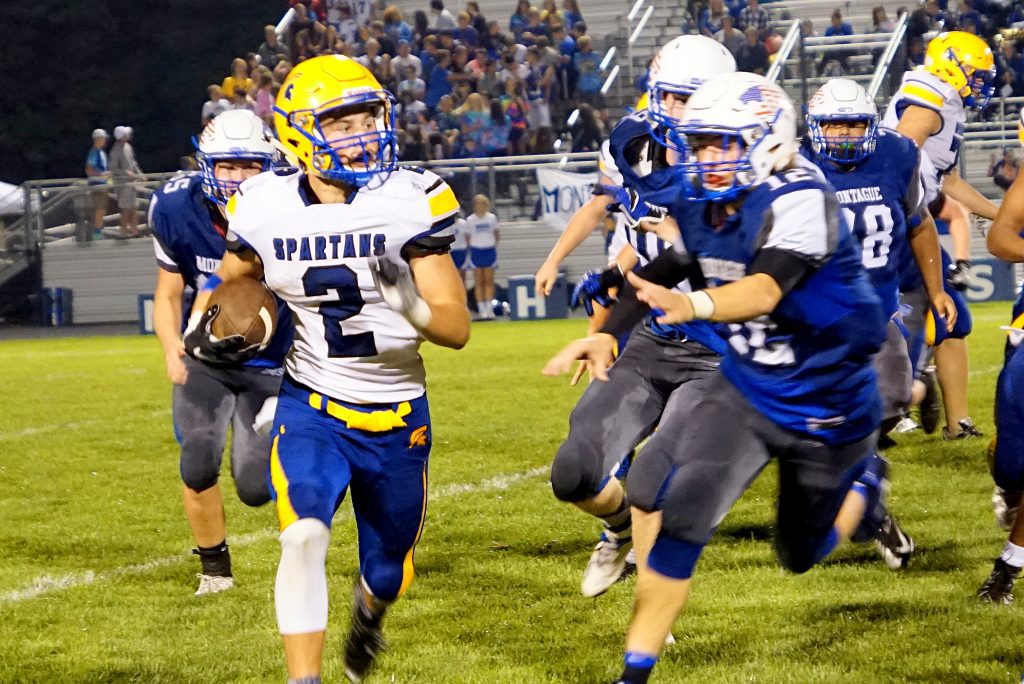 Seven plays later, Caviedes broke loose for a 25-yard touchdown run to put the Wildcats up 28-0.

Stark put the bookend on the scoring with 11:53 remaining in the game on a four-yard rush around the left side.

Montague has now outscored its opponents by a combined 173-24 in four games.

As impressive as the offense was Friday, Collins with equally impressed with his defense.

“The defense has been playing better every week. It’s a matter of being on the same page, doing the things we’ve been working on,” the coach said. “I think guys are understanding what we’re trying to achieve.” 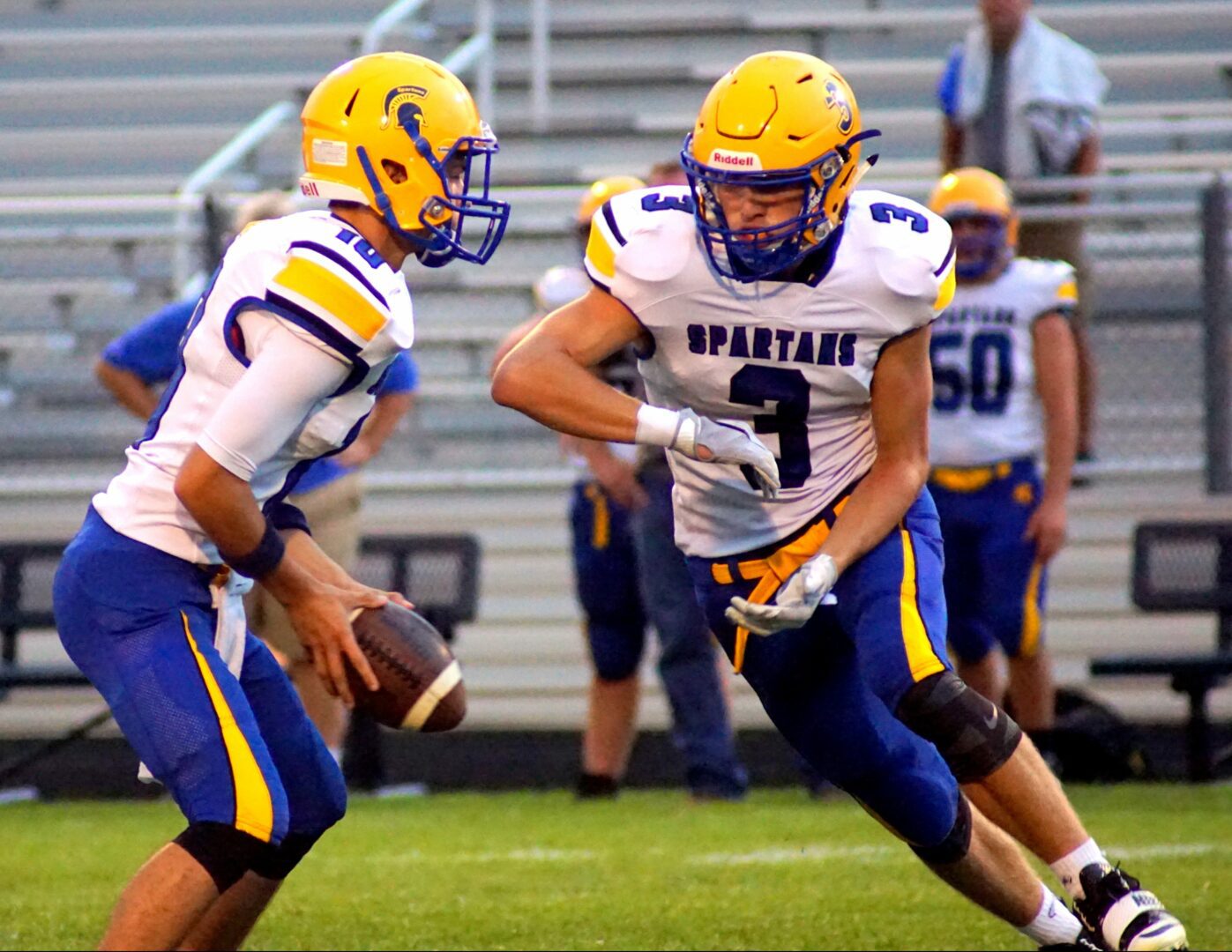 Mason County Central running back No. 3 Dylan Hearns gets ready for the handoff. Photo/Leo Valdez