MUSKEGON TOWNSHIP – Offense has been a challenge for the Reeths-Puffer soccer team this season.

But it certainly wasn’t a problem Thursday night. 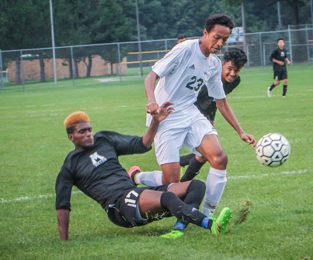 The Rockets scored early and often in a 7-1 victory over Muskegon in O-K Black Conference action at Eric Marcil Field on the R-P campus.

Reeths-Puffer improved to 5-5-2 on the season, and more importantly 3-2-1 in conference play. The Rockets are in third place in the O-K Black, behind Grand Rapids Union and Jenison, and needed a victory to remain in the title race with six league games remaining.

“Our challenge has been finishing goals,” said Reeths-Puffer Coach Keith Knapp. “We do a really good job of moving the ball, but we’ve struggled with consistency in scoring, particularly in big games. But I think we’re doing a better job of finding some chemistry up top. We’re making great progress.”

That progress was on display against the Big Reds.

The onslaught began when the Rockets scored on the first shot of the game, less than a minute into the first half.

Drake Fox broke in alone on the Muskegon goal, shot from close range, and tucked the ball between the legs of the Big Red keeper to give the Rockets a 1-0 lead.

The Rockets poured on the offense in the first half with an 11-1 edge in shots on goal. 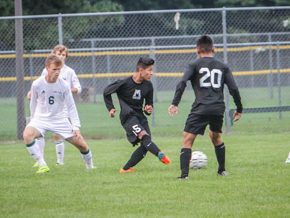 Reeths-Puffer added two goals in the second half, from Brendan Sherwood with 34:49 remaining, and Fox with 28:15 left, to pull ahead 7-0.

The Big Reds played better after halftime. The Rockets were one goal away from having the game stopped with the eight-goal mercy rule for the final 28 minutes, but Muskegon fought hard and managed to finish the game.

Demetrio Lopez scored the Big Reds’ goal on a penalty shot from within the goalie box with 3:09 left in the contest.

“This was a tough one,” said Muskegon Coach Jeff Holmes, whose team dropped to 2-6-1 overall and 1-4 in the conference. “(The Rockets) are really strong, fast, physical and they spread us out tonight.”

Despite the lopsided loss, Holmes said he was proud of his team’s effort in the second half.

“They played with a lot of heart,” he said. “If they had played like that during the entire game, I’m not saying the outcome would have been different, but it would have been more respectable.” 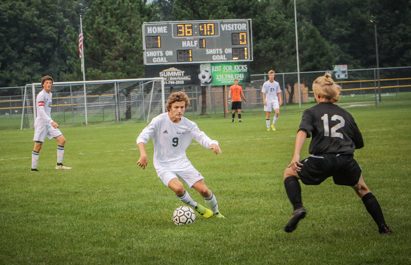 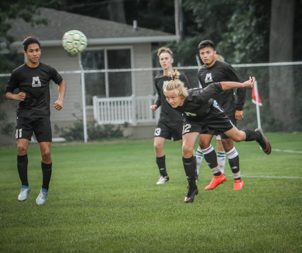 Tyler Bennett on the head ball for Muskeogn. Photo/Joe Lane 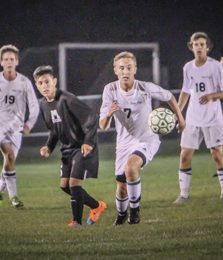