MUSKEGON HEIGHTS – Some people probably wondered just how successful the Muskegon Heights basketball team could possibly be this season. 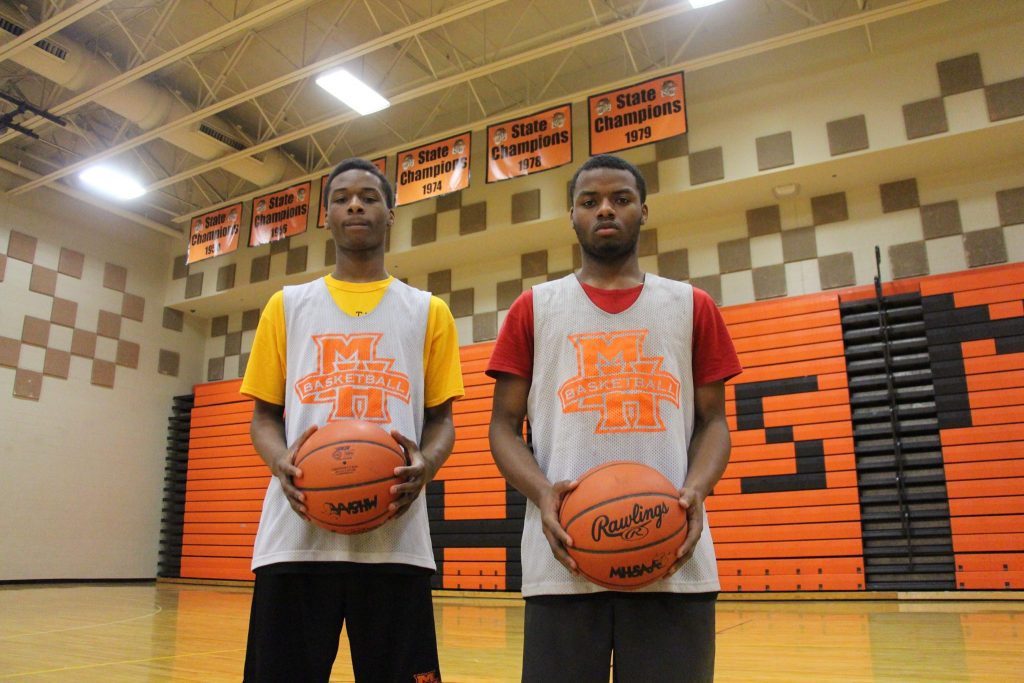 Some graduated, one transferred, and a couple others decided to focus on other sports, according to Coach Dalrecus Stewart.

But Stewart knew there was still reason for optimism. The Tigers returned three players who gained invaluable experience during last season’s tournament run, which ended with a heartbreaking 39-35 loss to eventual state runner-up Grandville Calvin Christian.

Two of those returnees are senior twin brothers Anthony Jones and Antoine Jones, who along with junior post player Keyshawn Watson form the foundation of a Tigers squad that has turned in a strong 11-4 record so far this season, despite all the changes to the lineup.

“Those three are our cornerstones,” said Stewart. “They’ve been through the fire and they know the system.”

The Tigers will face a major challenge on Friday night when they host Ludington in a Lakes 8 Conference showdown. Ludington is undefeated on the season and has a one-game lead in the conference standings over Muskegon Heights. 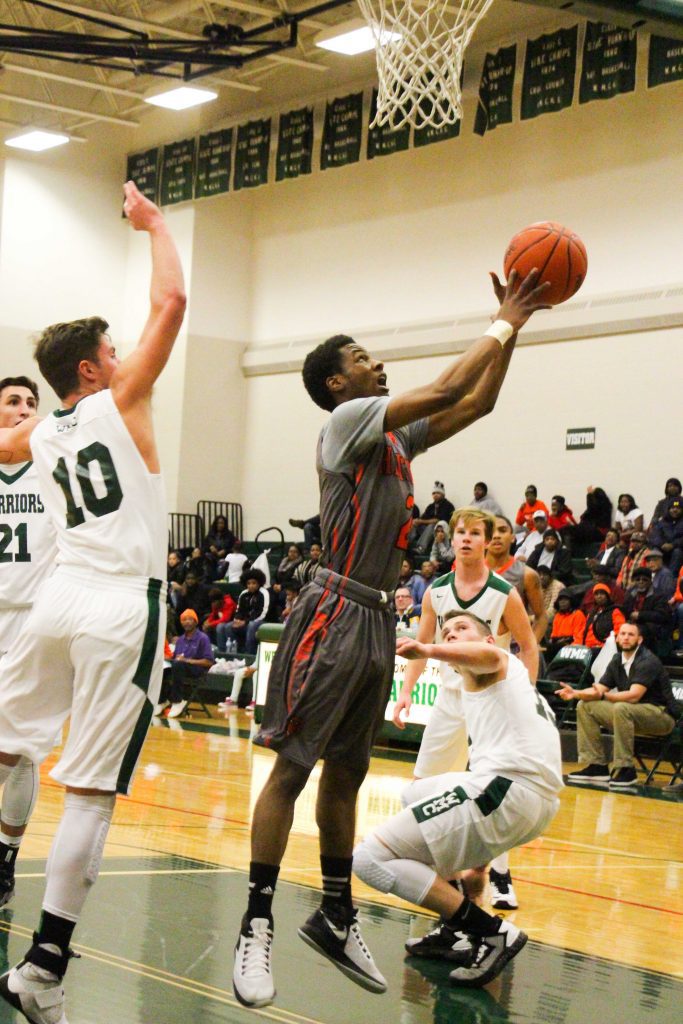 Antoine Jones gets a shot off during a recent game against WM Christian. Photo/Jason Goorman.

The Tigers’ first meeting with Ludington did not go well. They lost 60-44 in the Orioles’ gym on Jan. 6.

“That was a tough loss, but we’ve learned from it,” Anthony Jones said. “We have to communicate with each other better.”

Stewart said he had full confidence handing the keys to the Jones brothers to drive the Tigers this season.

The twins, the sons of Antonio Sr. and Rochelle Jones, have identical looks and similar skill sets on the court.

They’re pivotal in sparking the team’s fast-break attack or draining long-range shots, as well as using their quickness to frustrate the opposition with full-court pressure defense.

Although Anthony has been in the starting lineup since his sophomore season, Stewart said he experienced a tough learning curve as he broke into varsity.

“There were some tough times that first year when he didn’t see as much playing time as he’d like, but you never heard him complaining,” Stewart said. “It’s the same with both (Anthony and Antoine). They’ve always been young men with high character. Both are very coachable.”

Anthony said he had to adjust to the physical nature of the varsity game and learn “to play faster,” but also under control.

That’s still a bit of a challenge for Anthony and the Tigers. Stewart said his team’s biggest downfall so far has been its carelessness with the ball in key situations, including the loss to Ludington. 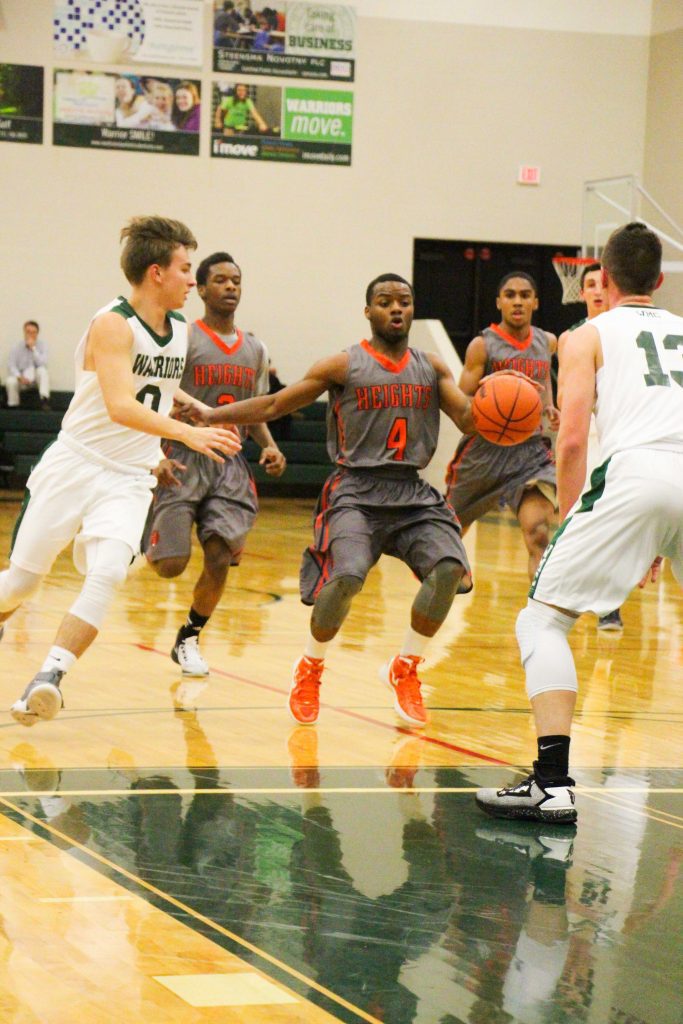 “The more we play, the better we’re getting (at eliminating turnovers),” Stewart said. “We’re trying to put a full 32 minutes together. But it’s the challenge of keeping teenagers focused all the time.”

Stewart said both Jones brothers are excellent outside shooters and great defenders, but gives Anthony the title of “lock down defender.”

“I always want to guard the other team’s top scorer and I’m willing to do my best,” Anthony said. “Even though sometimes, I know it won’t be easy.”

While their looks and skills are strikingly similar, Stewart said the Jones brothers’ personalities differ. Anthony is more outspoken and the team’s vocal leader, while Antoine “is a man a few words,” the coach said.

That must not apply when the brothers are battling one-on-one  – either on the court or in 2K NBA video games. They apparently get pretty competitive when things heat up.

“It’s pretty even,” Anthony said of their basketball battles. “We don’t fight or anything like that. Just a lot of talk.”

Antoine excels in creating off the dribble and making tough shots in traffic, according to Stewart.

Antoine said he learned that skill, and several others, from watching his older brother, Antonio Jones, a 2015 Muskegon Heights graduate.

“We’ve been watching him play so long,” Antoine said. “We always wanted to follow in his footsteps and be like him.”

Now it’s Anthony and Antoine that’s everyone’s watching, sparking a team that has changed a lot since last season, but is still producing a lot of wins.