Walker, Mona Shores’ all-time leading scorer, did her best impression of Michael Jordan’s famous “flu game” by shaking off her illness and pouring in a career-high 39 points in the Sailors’ 72-47 victory over Muskegon in a key O-K Black Conference matchup. 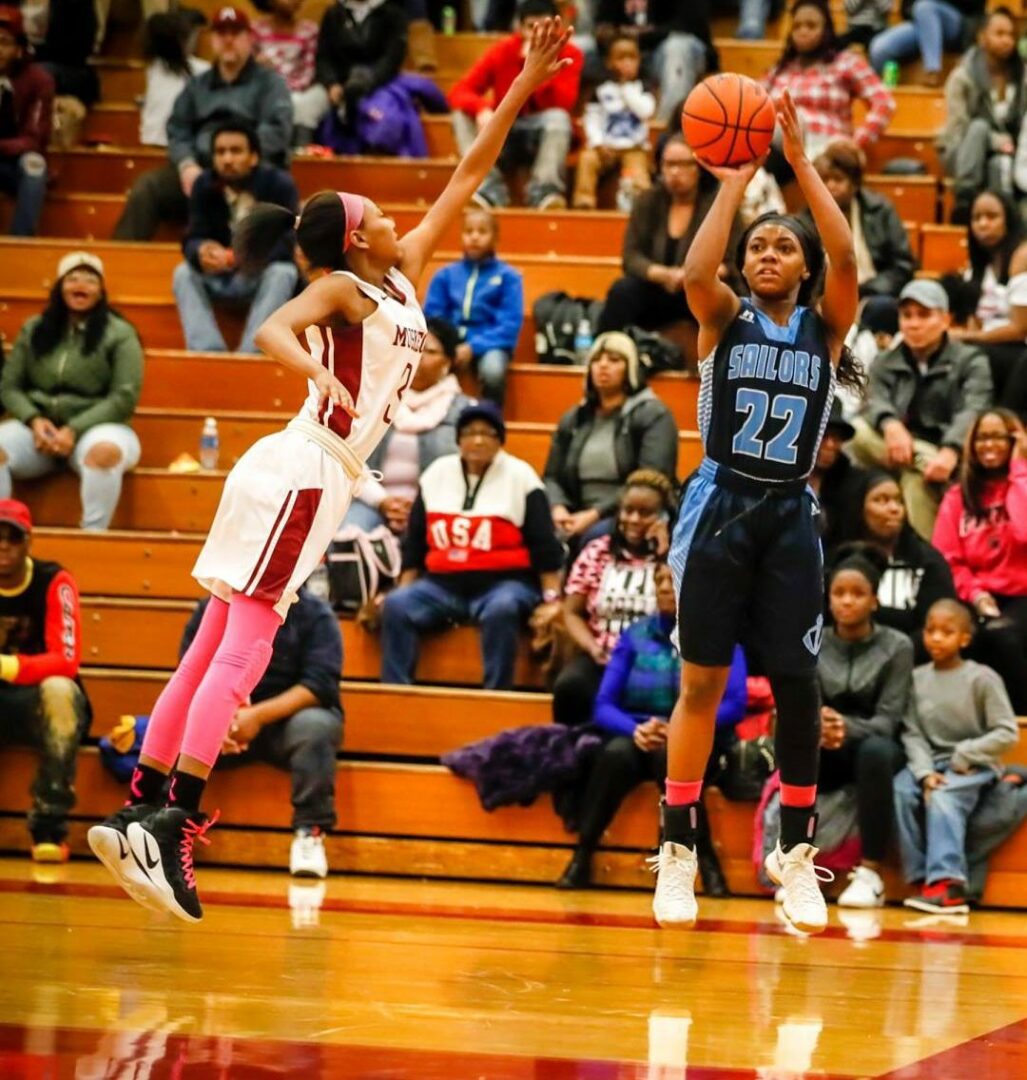 Jordan Walker goes up for the shot in the corner as Muskegon’s Daz’Sha Day tries for the block. Photo/Tim Reilly

Mona Shores and Muskegon came into the game tied for first in the O-K Black, along with Reeths-Puffer. The Sailors are now 12-3 overall and 6-1 in the conference while the Big Reds fell to 7-7 overall and 5-2 in the league. Reeths-Puffer, which has one conference loss, did not play on Friday.

“She really didn’t have her legs that much tonight,” Kurth said about Walker. “I can’t believe it. She was feeling it. I don’t know if it’s Jordan-esque or what.

“This week we were all pretty sick, myself included,” Walker said after the game. “(The win) showed how we can persevere and come out on top.”

“She does everything right as a player,” he said. “If she was in the Detroit area right now she probably would be, definitely, Miss Basketball this year. I just feel she doesn’t get the notoriety she deserves, playing on this side of the state.”

In addition to her 39 points, Walker grabbed 12 rebounds, had six steals and was 10-for-11 at the foul line.

“Setting a new career high is good,” she said about her performance. “The win tonight is even better.”

Walker added that her teammates played much better than their first game against Muskegon, which was also a victory.

“I think tonight we came out with more intensity,” she said. “I think we came out and knew how we can play.” 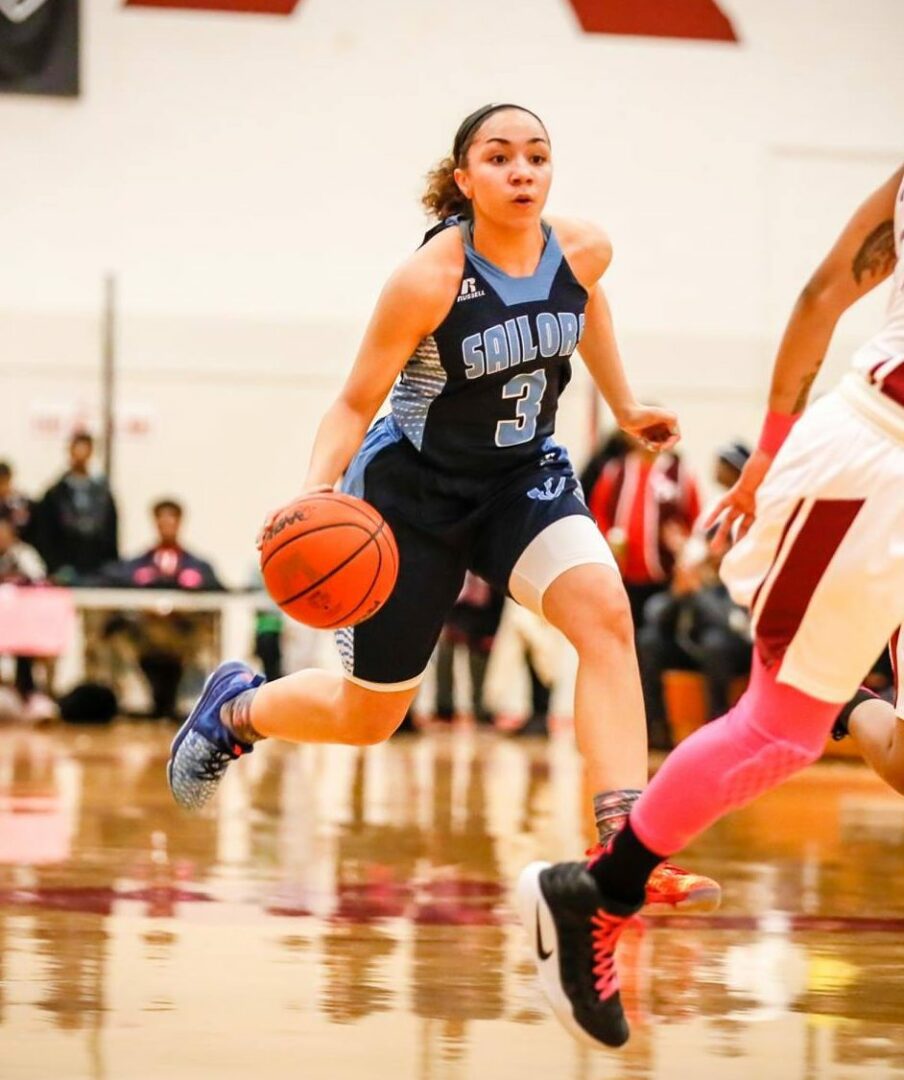 ALyza Winston brings the ball up the court for Mona Shores. Photo/Tim Reilly

The Mona Shores offense struggled early, but once Walker caught fire there was no looking back. She scored seven points during an 11-0 run in the middle of the first quarter and the Sailors led 12-6 at the first buzzer.

Walker put her team on her back in the second quarter, scoring the Sailors’ first 14 points and helping them extend their lead to 29-16 at halftime

The Sailors led 47-26 after three quarters, then Walker scored another 14 points in the fourth to help seal the easy victory.

“She’s got a great motor,” Kurth said. “She plays hard. This rivalry brings out the best in our kids. It’s ridiculous what she did tonight.”

Kurth saw improvement in his team, but says they can still get better.

“We still didn’t play our best game. We have a lot to do yet,” he said.

“I would say that last five minutes was the only time we actually gave some energy in the game tonight,” he said.  “I think we just have to have a little more pride defensively.” 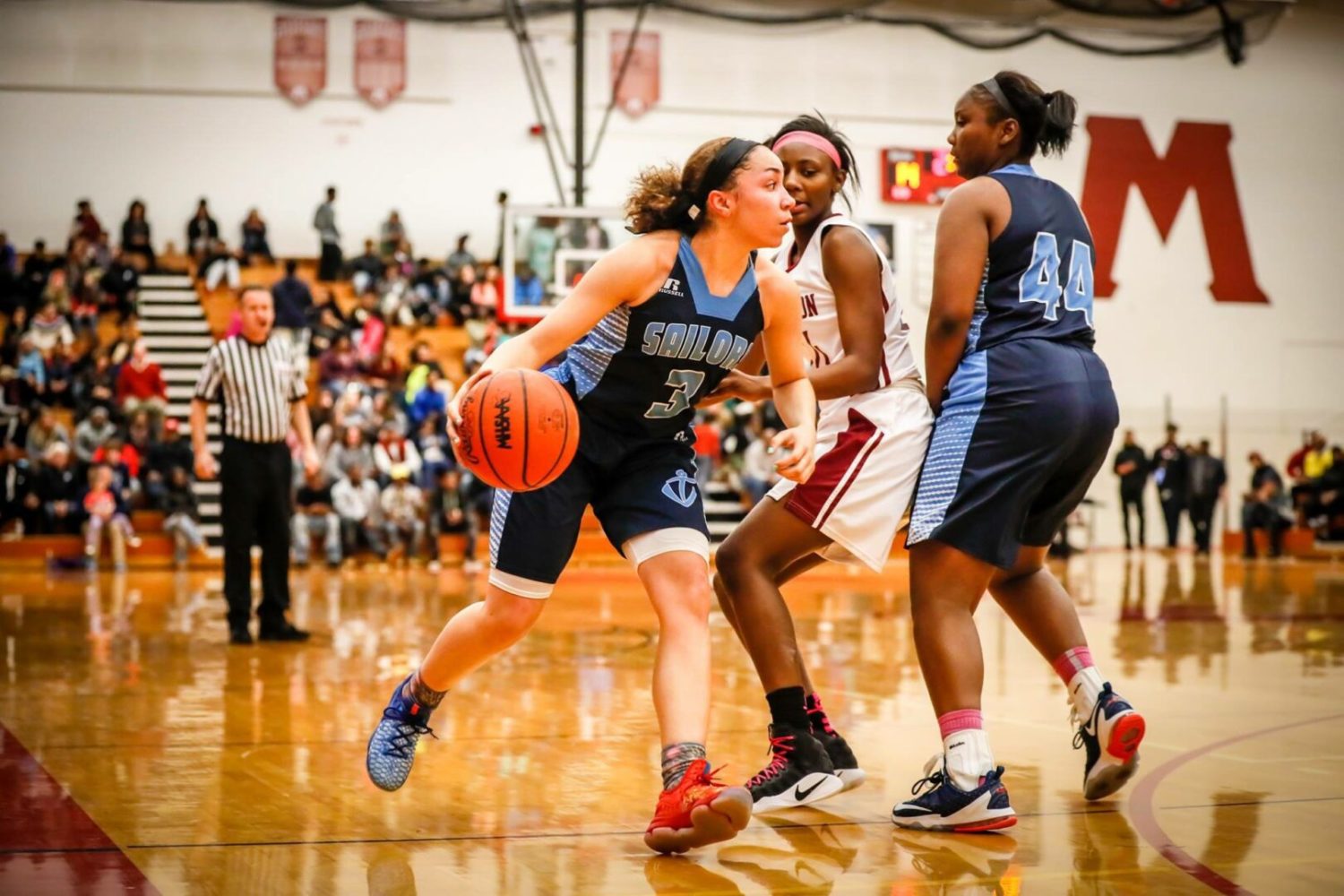 Alyza Winston gets the pick from DeeDee Trotter for Mona Shores. Photo/Tim Reilly 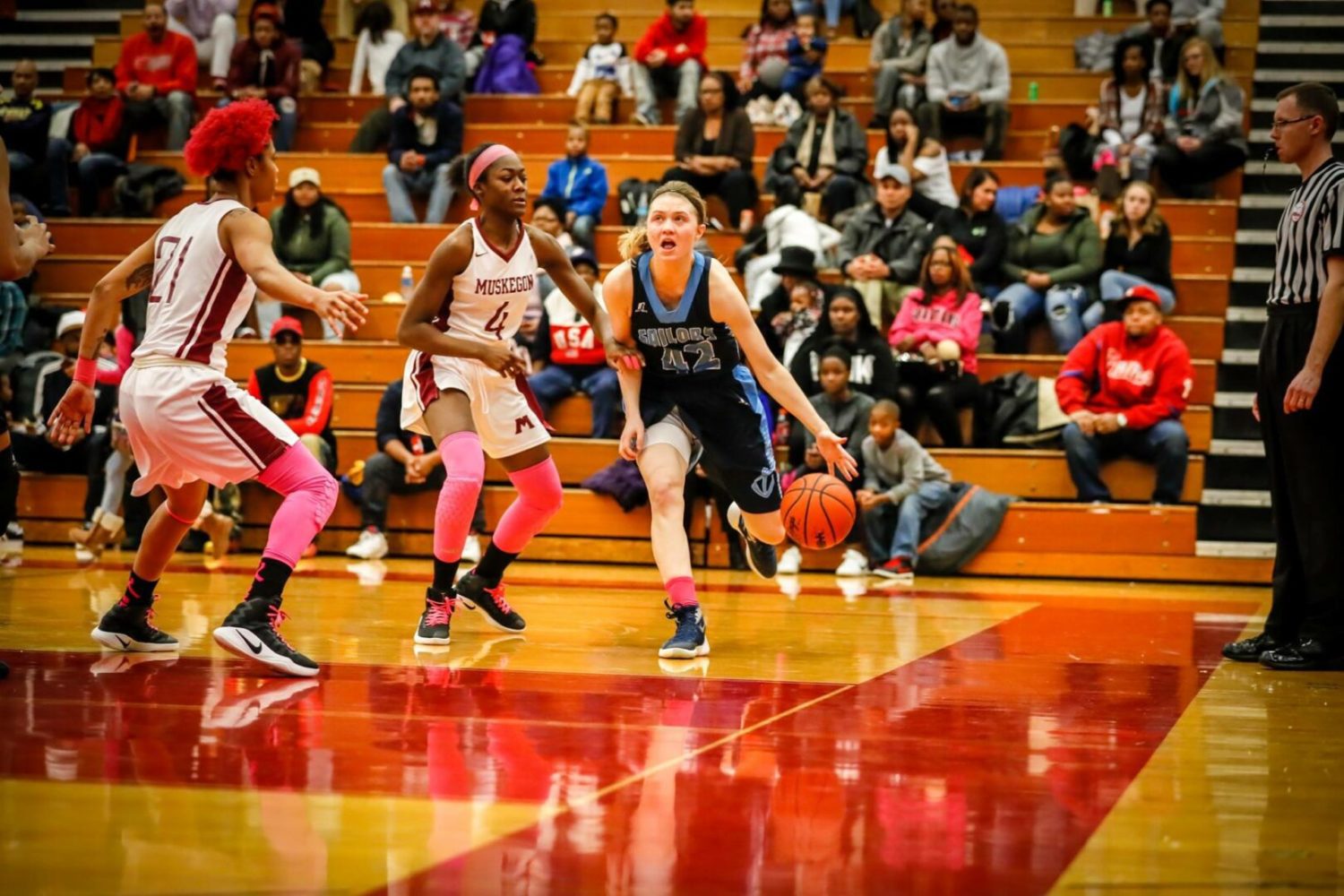 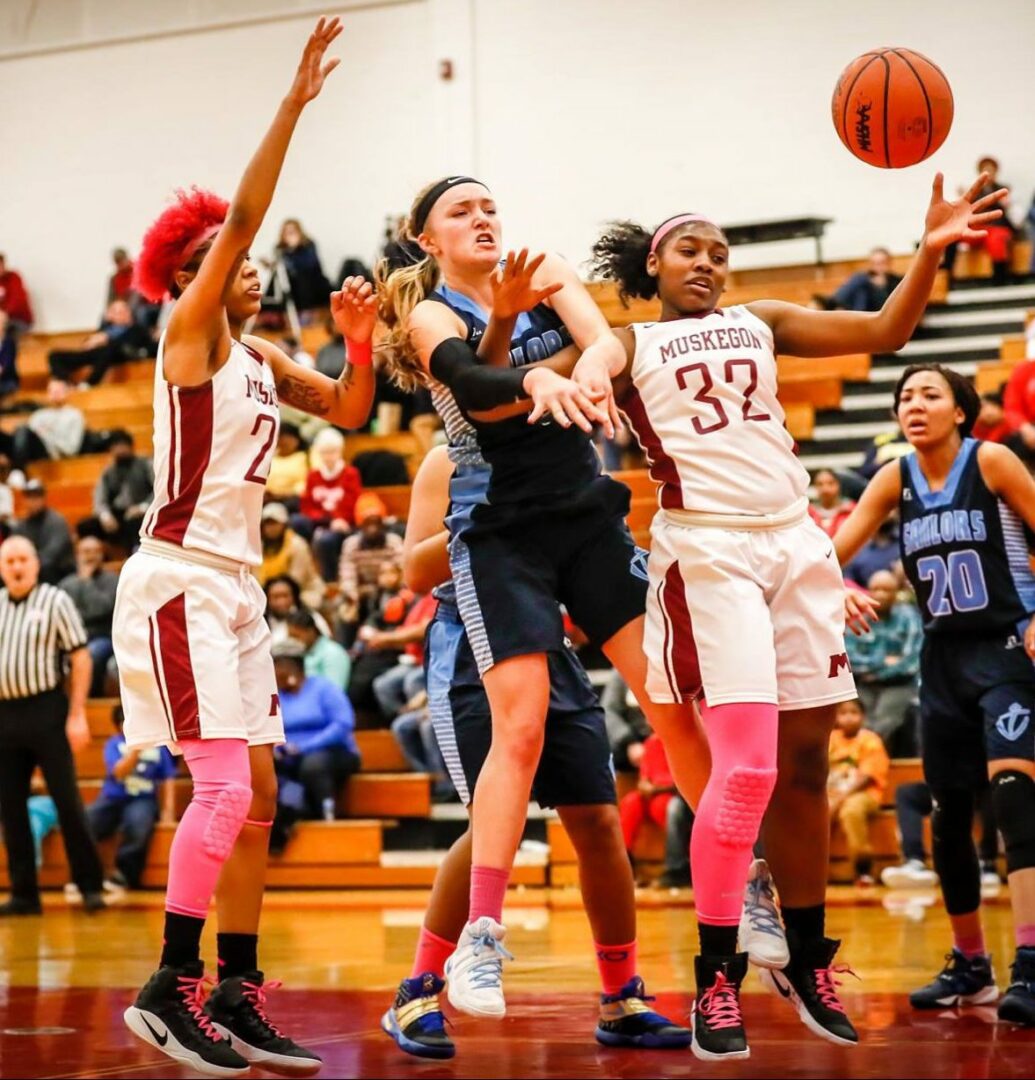 Ryleigh Wehler gets tied up on the rebound with Muskegon’s Diynasti Dowell. Photo/Tim Reilly 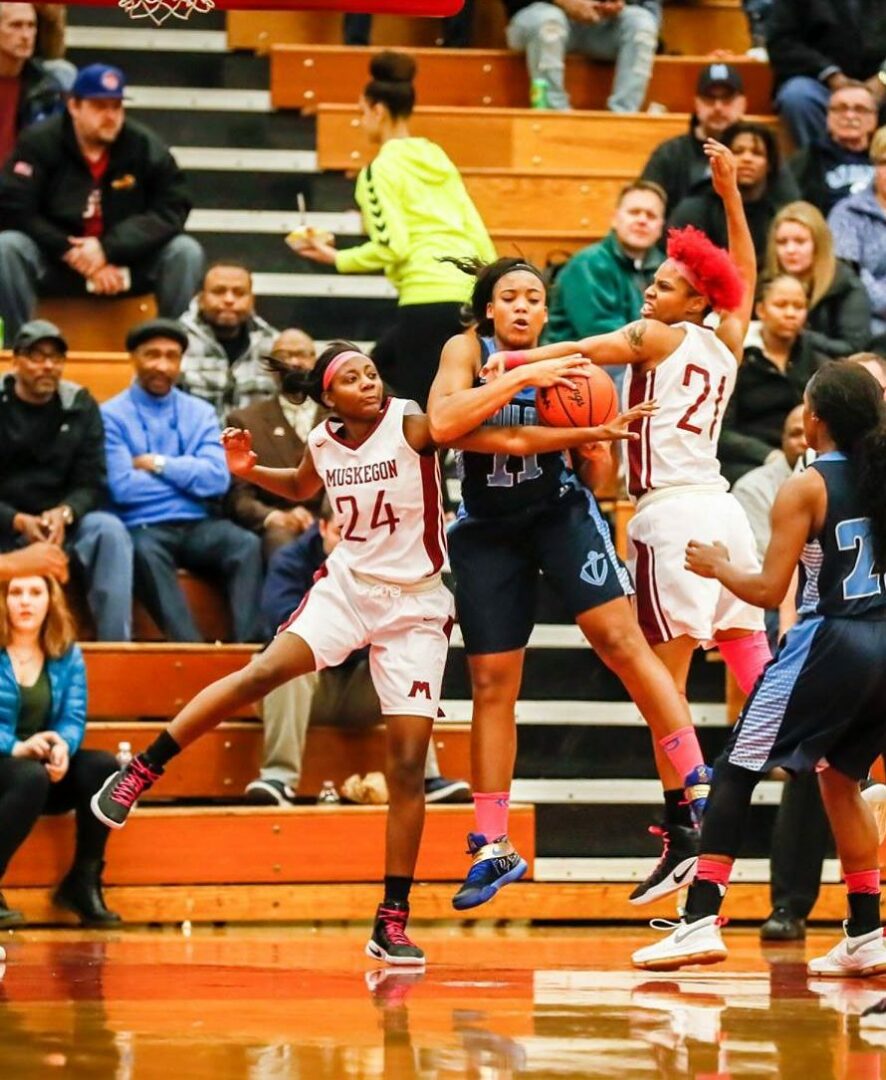 Mona Shores’ Nia Miskel gets the rebound between No. 24 DeShonna Day and Tierra Williams. Photo/Tim Reilly 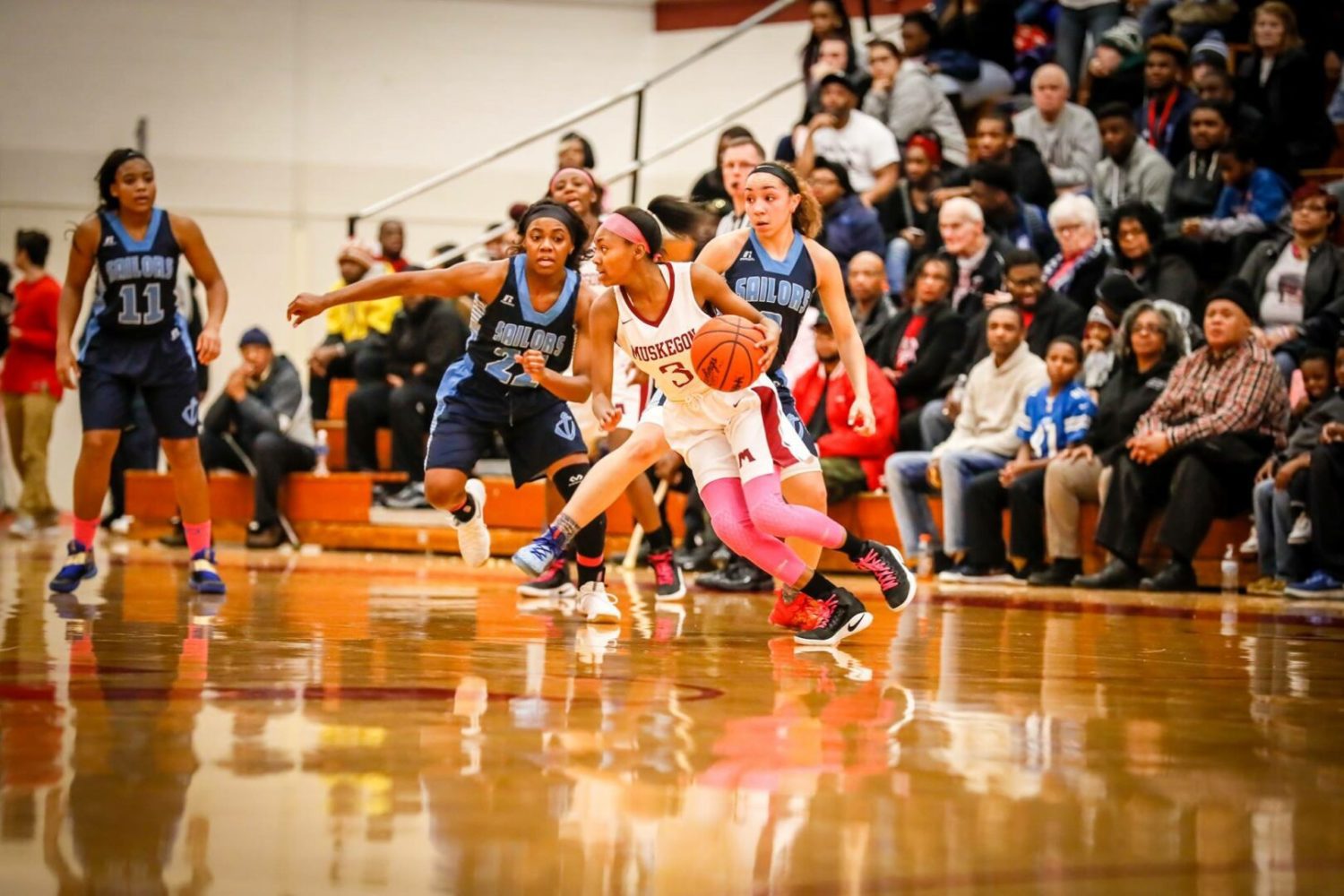 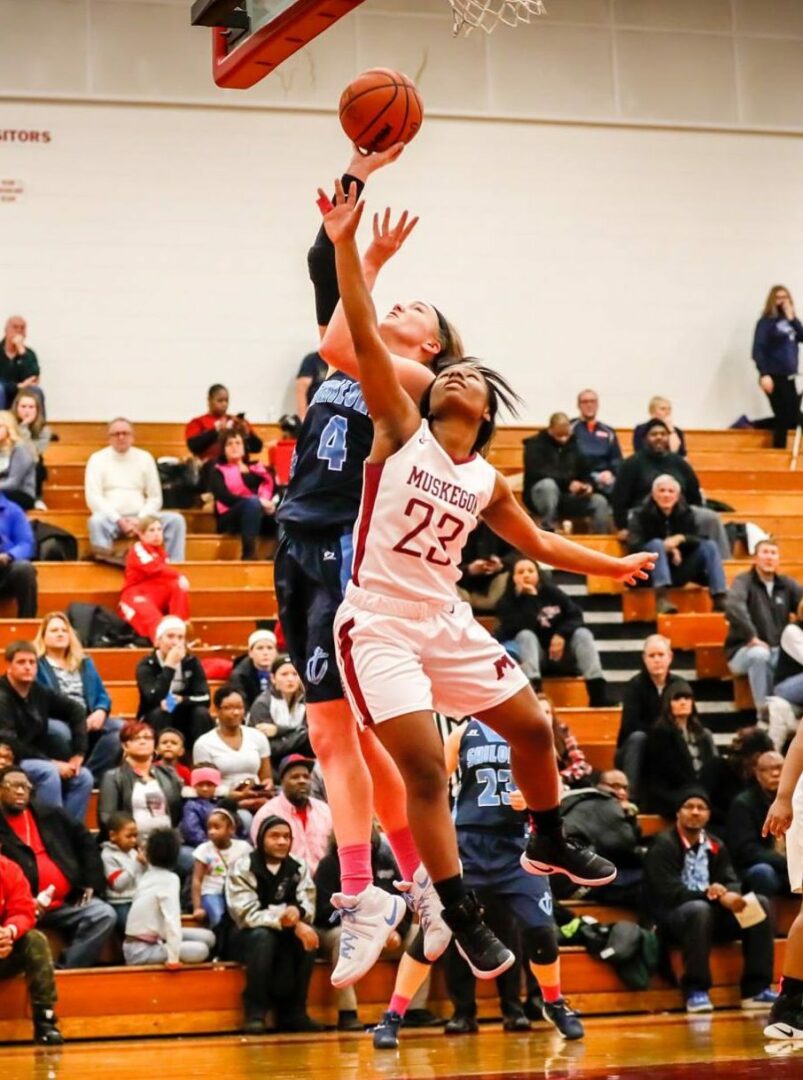 Ryleigh Wehler goes up for the shot against Muskegon’s Brionne Crews. Photo/Tim Reilly 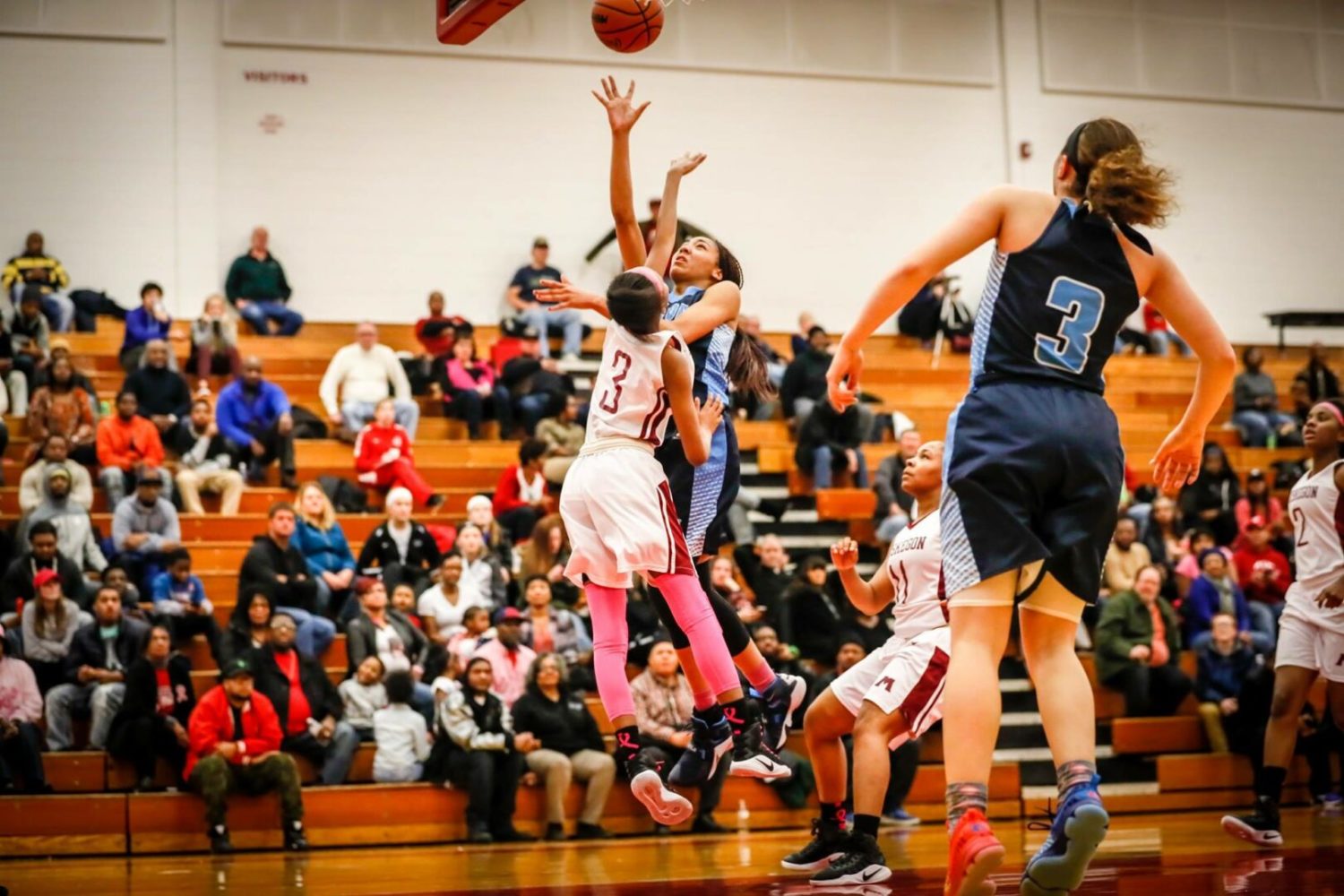 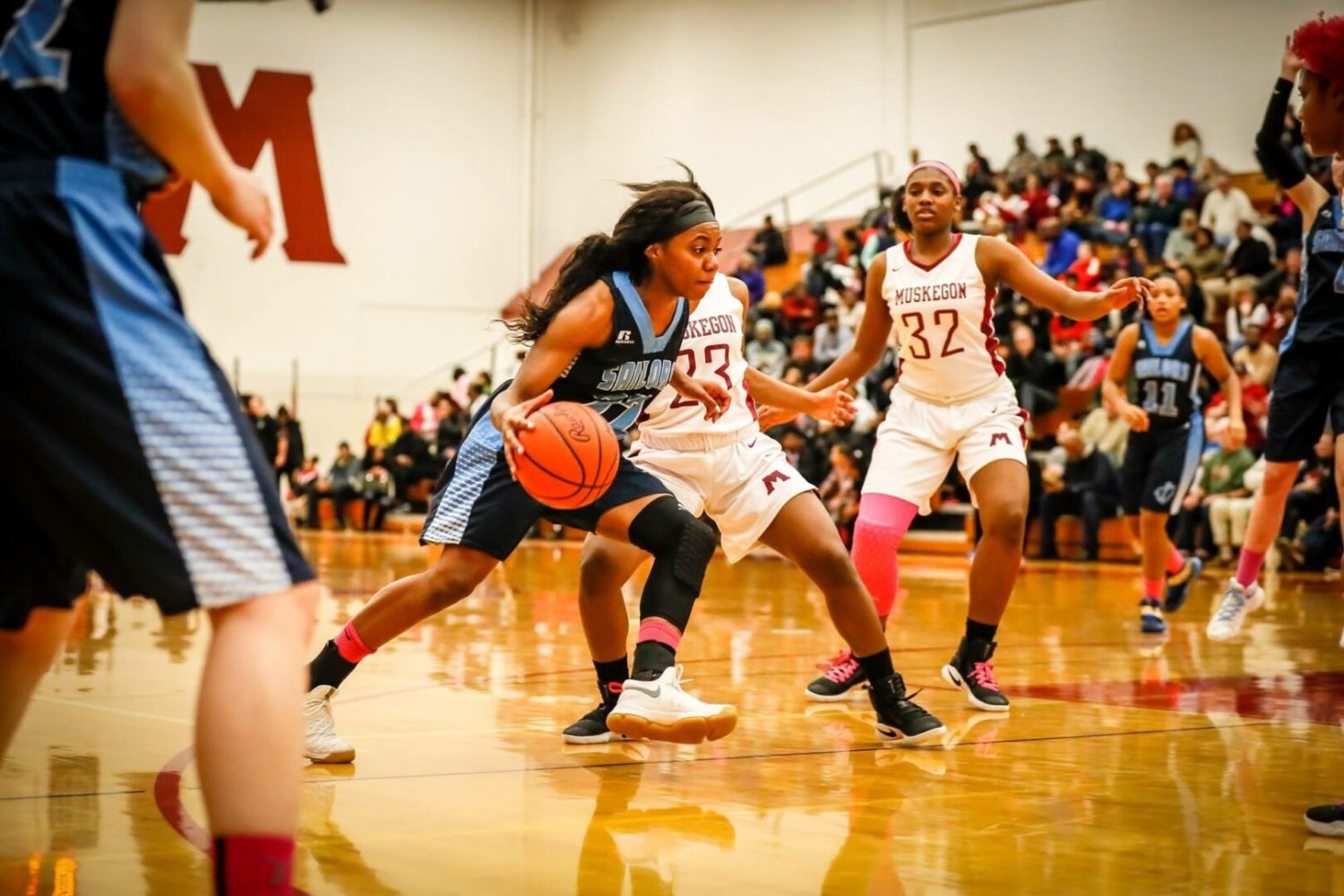 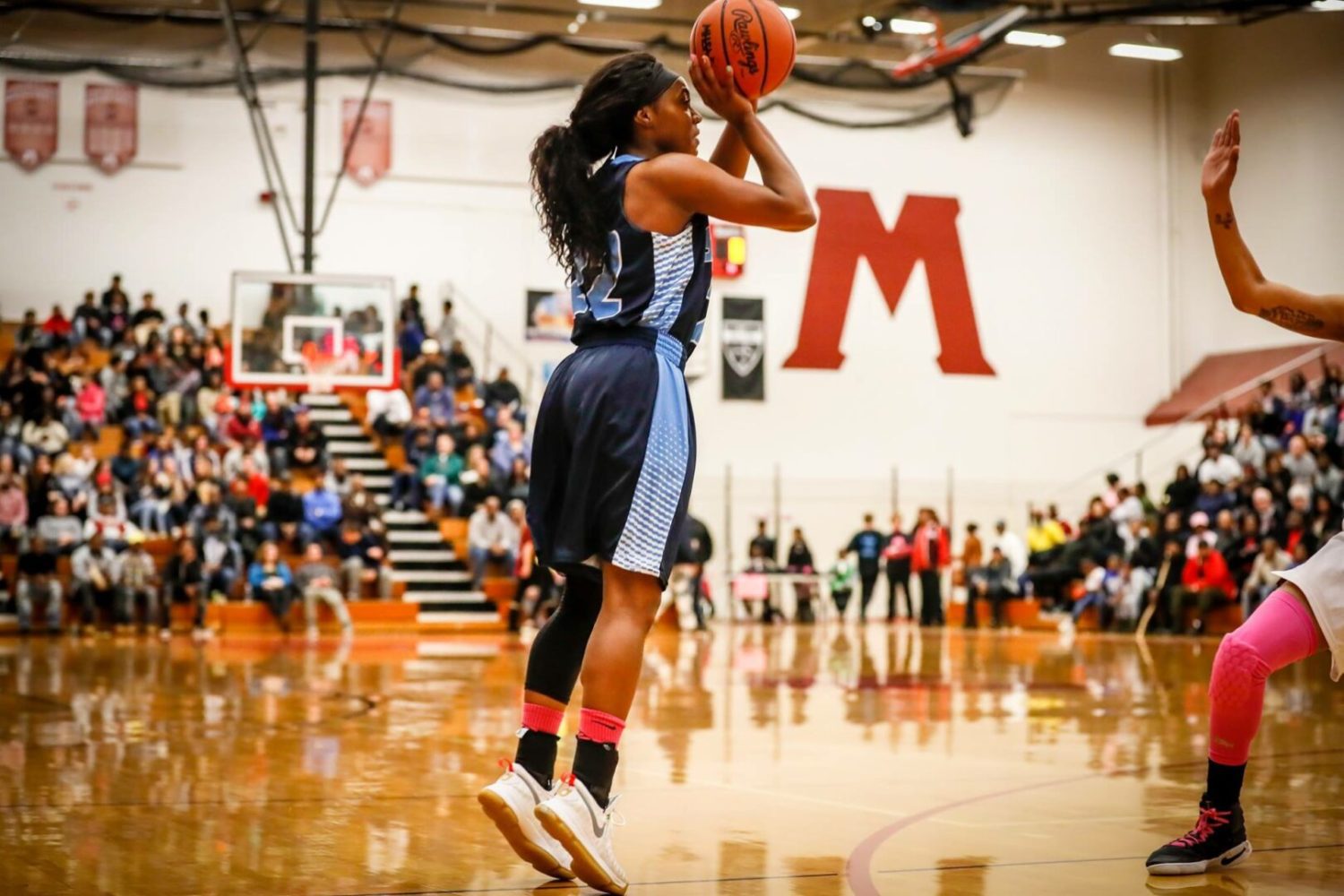 Jordan Walker squares up for the shot. Photo/Tim Reilly