The Warriors, who typically do far better, are intent on having a far more successful 2017.

So far, so good for head coach David Hulings and company.

WMC improved to 4-1 on the young season with an impressive 6-2 victory over host Fruitport on Tuesday in non-conference action.

The Warriors won despite falling behind early in the game. Evan Fles ignited the comeback with a three-goal hat trick in the first half.

“It was a great win, we loved it,” Hulings said. “I liked my guys finishing tonight. We allowed a goal at the end to a great player (Zack Shane), but we shut a great team down tonight, so I was happy with my defenders.” 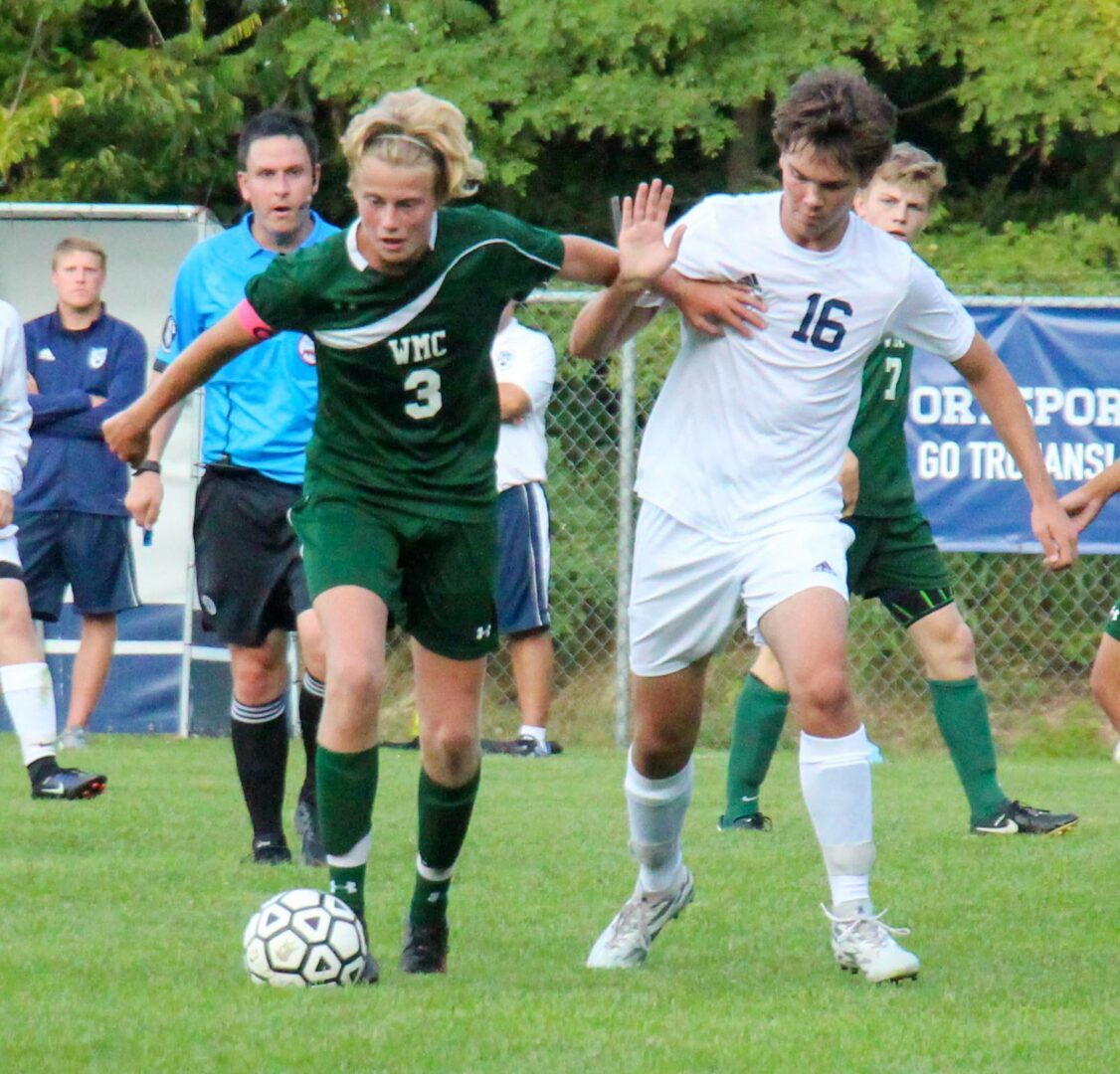 Fruitport struck first, just 4:24 into the game, when Eli VerMerris crossed to Ryan Bytwerk, whose shot bounced off a defender and into the net.

But then the game became the Evan Fles show.

Fles tied the game less than two minutes after the Fruitport goal. His first tally came on a rebound header after a shot by Adam VanHoeven slammed the crossbar and bounced straight down to Fles.

Hulings said his players are developing a positive tendency to answer opponents’ goals.

“(Our players) kind of have a mentality in their head, that when the other team scores, how quickly can we get that goal back?” Hulings said. “I think that’s what they’re thinking about all the time, so I don’t have to tell them anything.”

Fles scored two more goals in just over a minute late in the first half, including the eventual game winner. 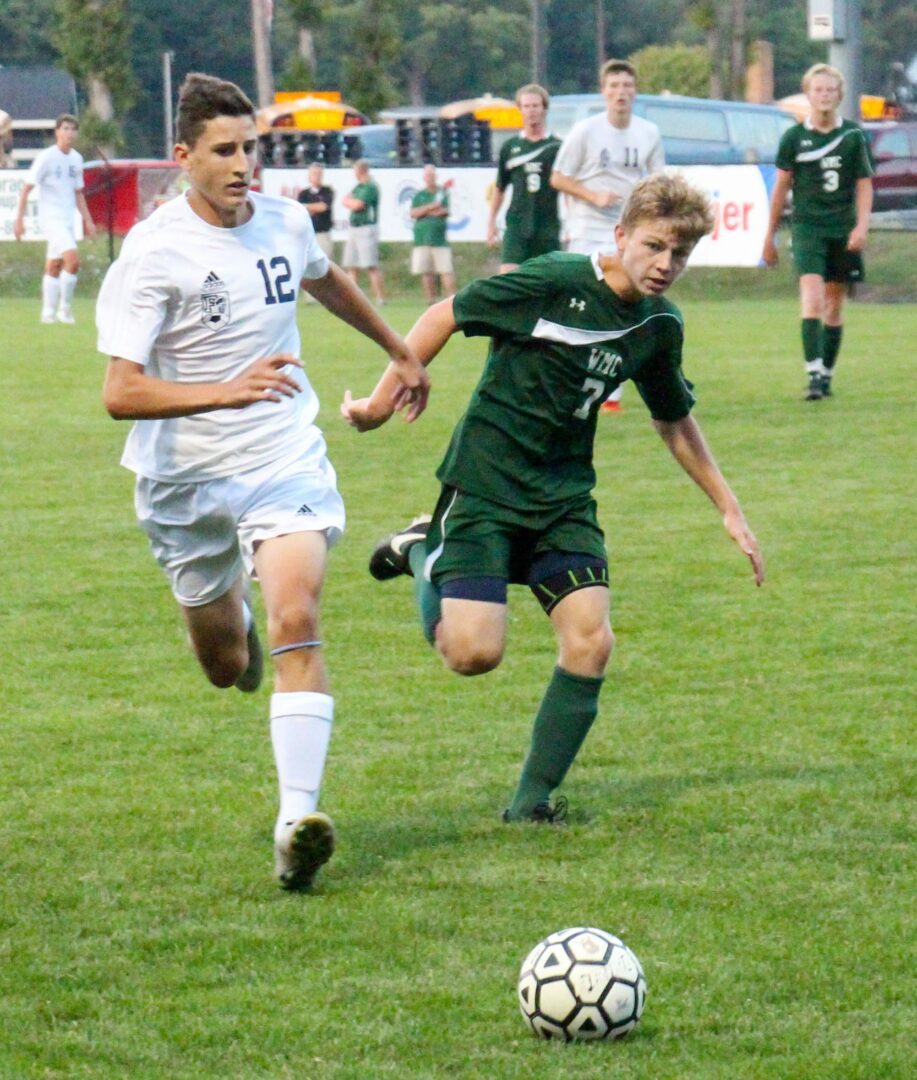 With 9:22 to play, he beat a Fruitport defender and found himself alone with the goalkeeper, before crossing a shot to the left post to put WMC up 2-1.

His final goal came with 8:20 remaining in the half, giving the Warriors a 3-1 edge.

WMC scored again with 22:16 remaining in the game when junior Hayden Hubers drive down the right wing and crossed to Johnscott Finley at the top of the box. Finley angled a shot to the far post to put the Warriors up 4-1.

Zach Shane got a goal for Fruitport with 17:56 to play, with an assist from Austin Golden.

The Warriors collected goals down the stretch from Seth VanderKooi and Josh Paquin.

The loss drops Fruitport to 1-3 on the season. The Trojans will visit Rockford on Thursday. 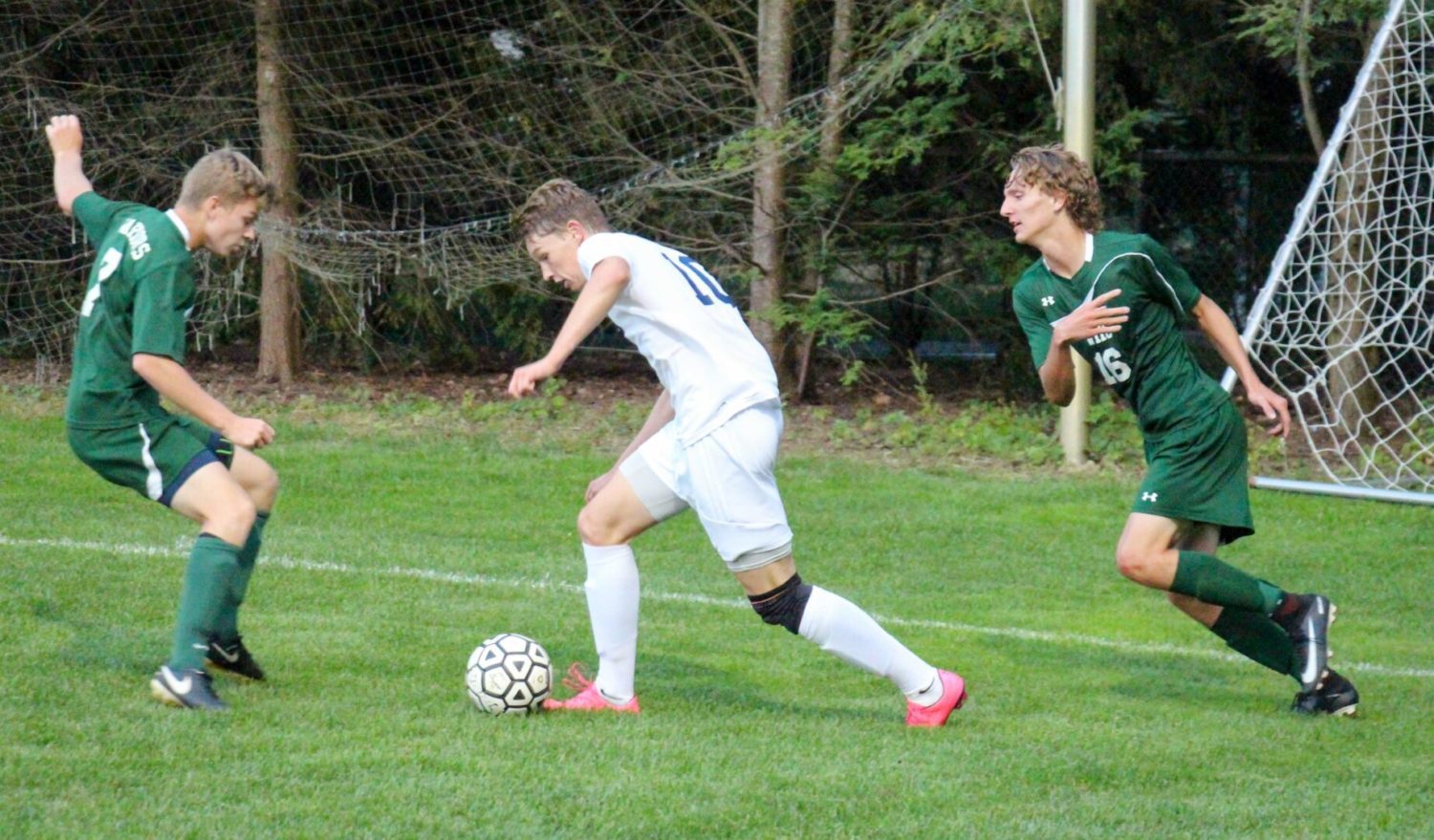 Fruitport’s No. 10 Zack Shane tries to menuever around WMC’s No. 7 Chandler Breit and No. 16 Brandon Fles. Photo/Jason Goorman 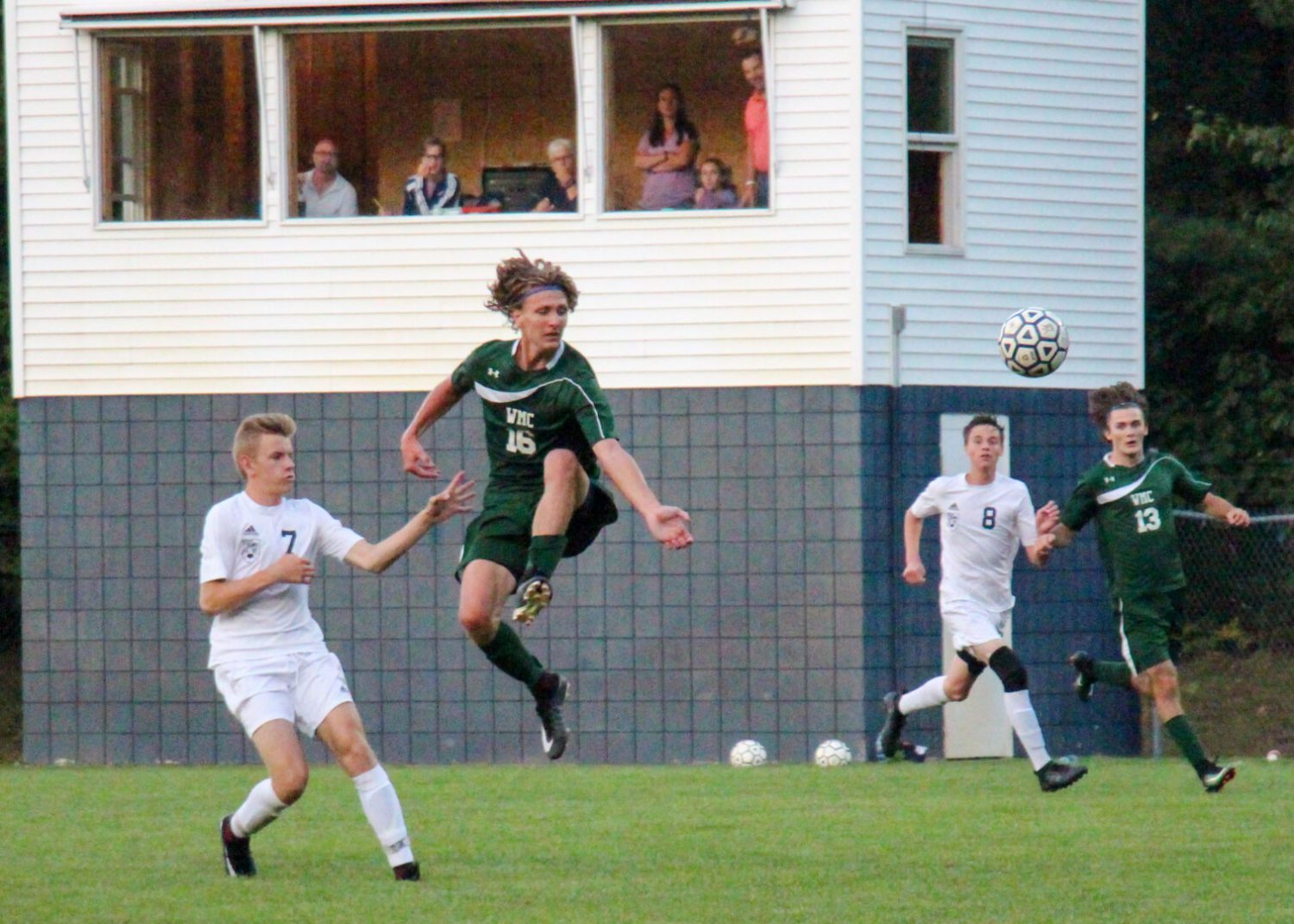 Brandon Fles heads the ball for WMC in front of the Trojans’ No 7 Ryan Bytwerk. Photo/Jason Goorman 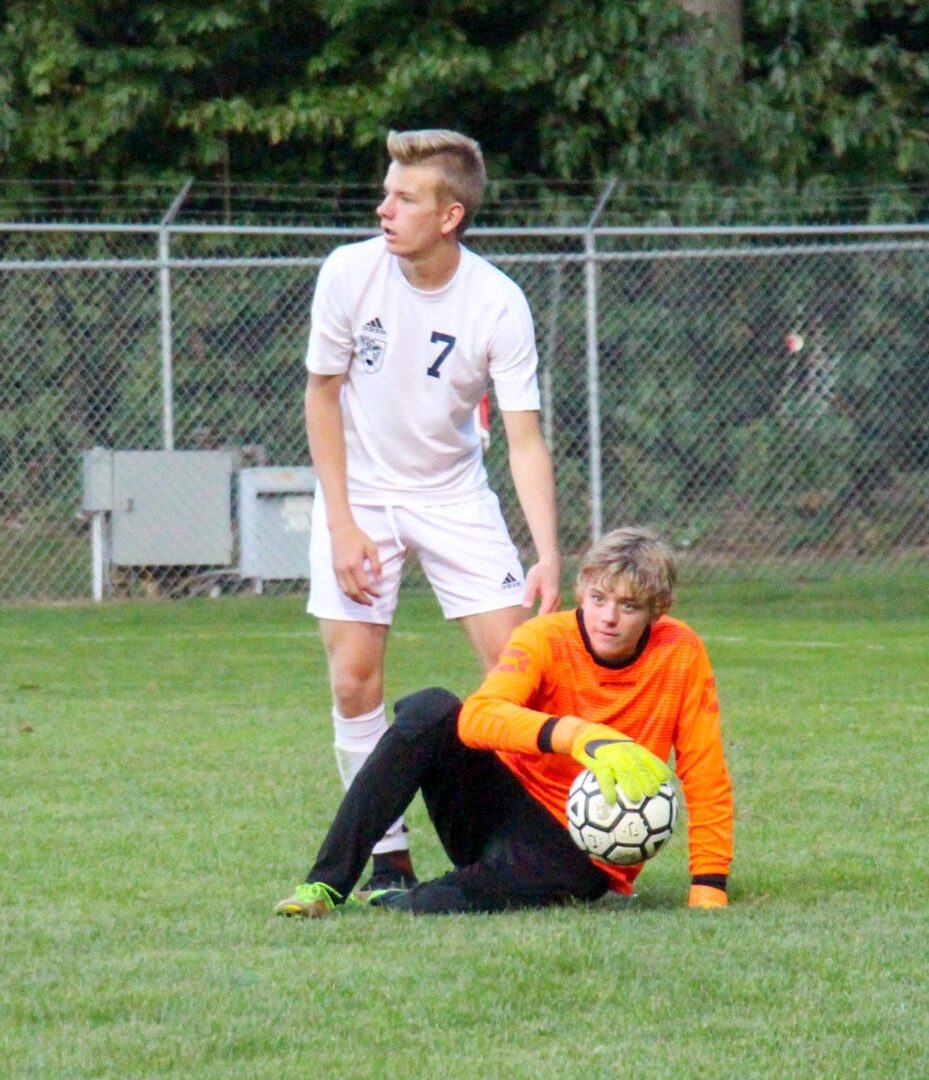 Jameson Goorman comes up with the save with Fuitport’s Ryan Bytwerk close by. Photo/Jason Goorman 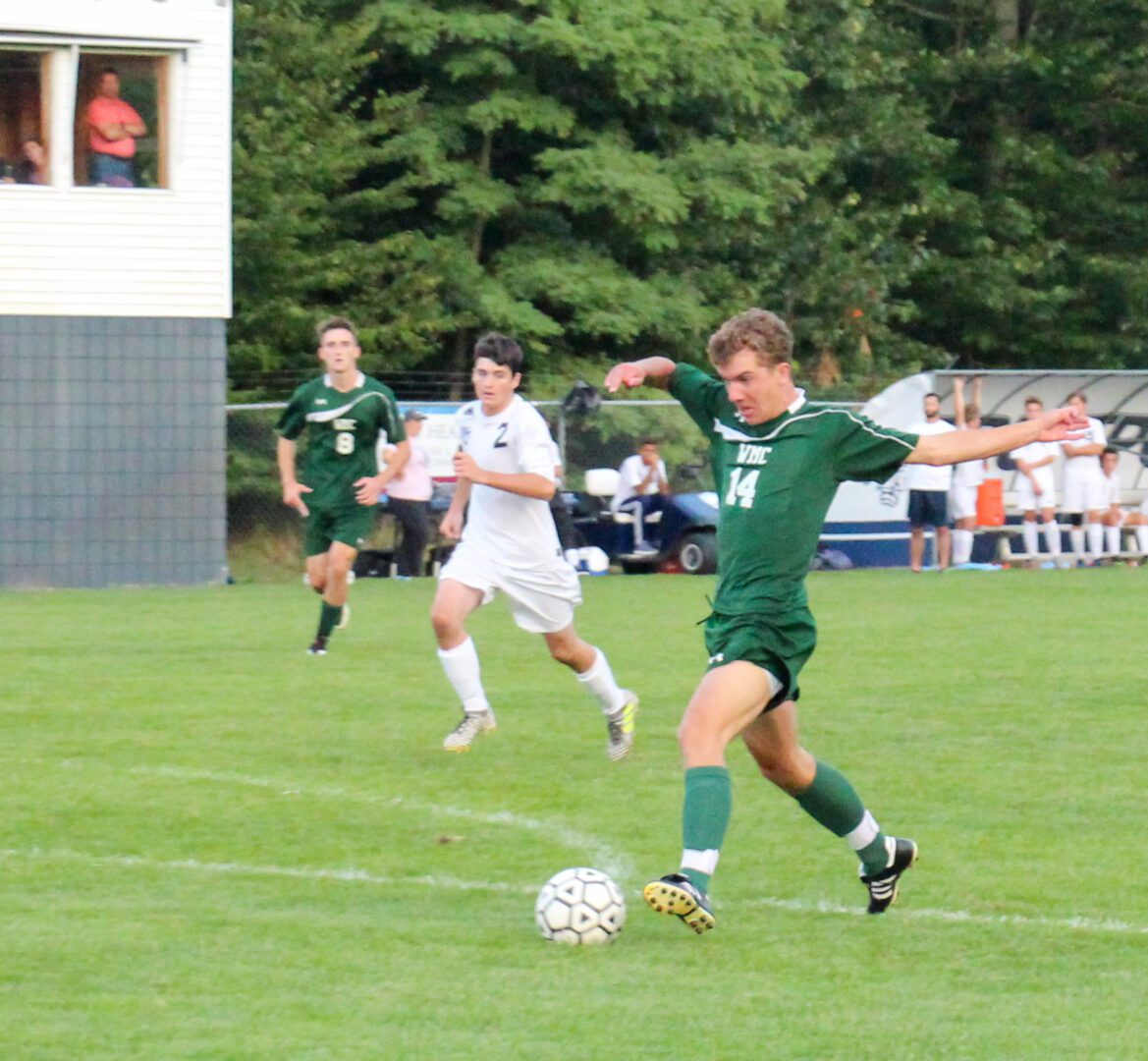 Johnscott Finley controls the ball at the 18 before tallying a goal for WMC. Photo/Jason Goorman 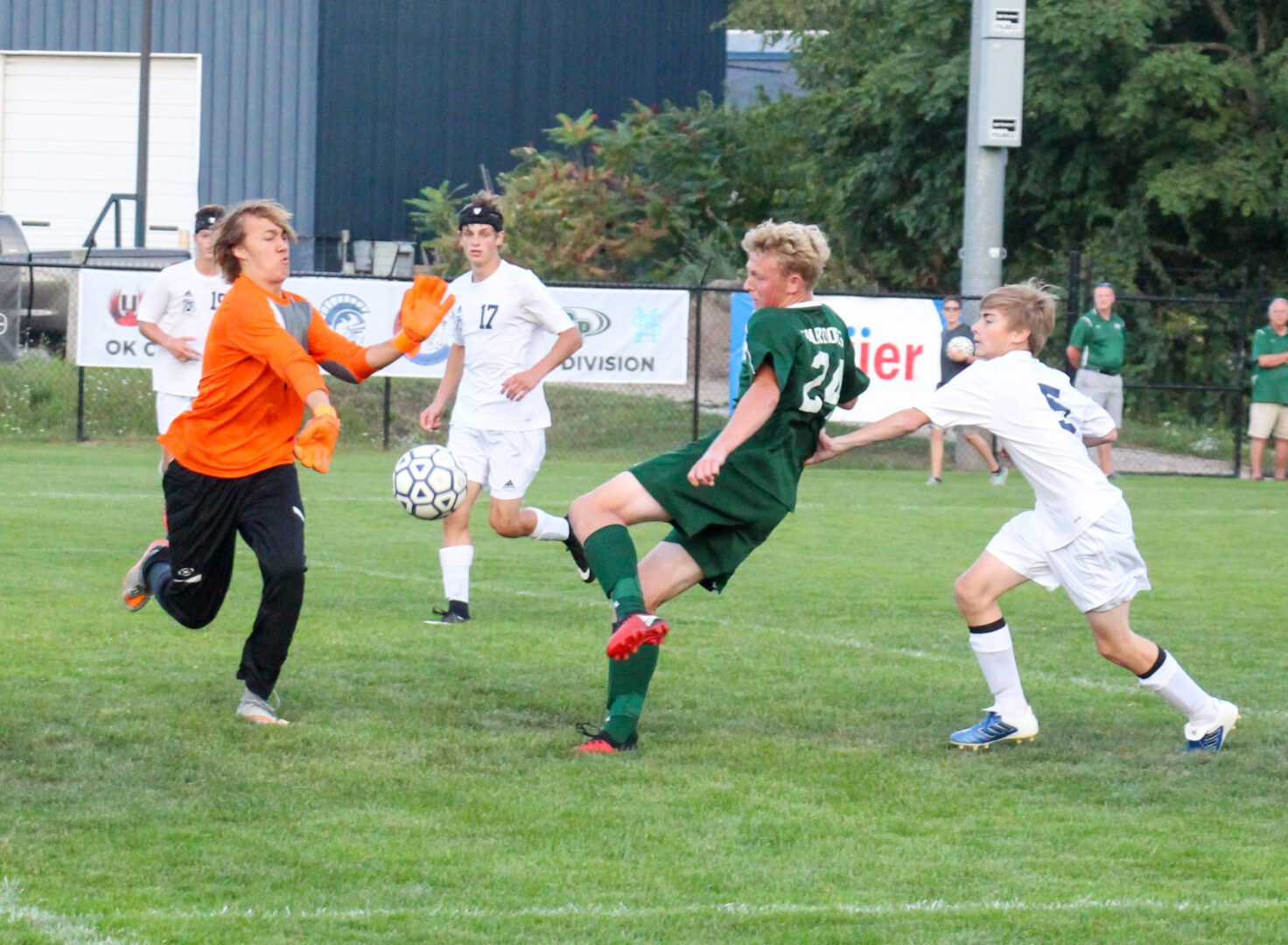 WMC’s Seth VanderKooi tries to get a last foot on the ball before goalie Connor Hines makes the save. Photo/Jason Goorman 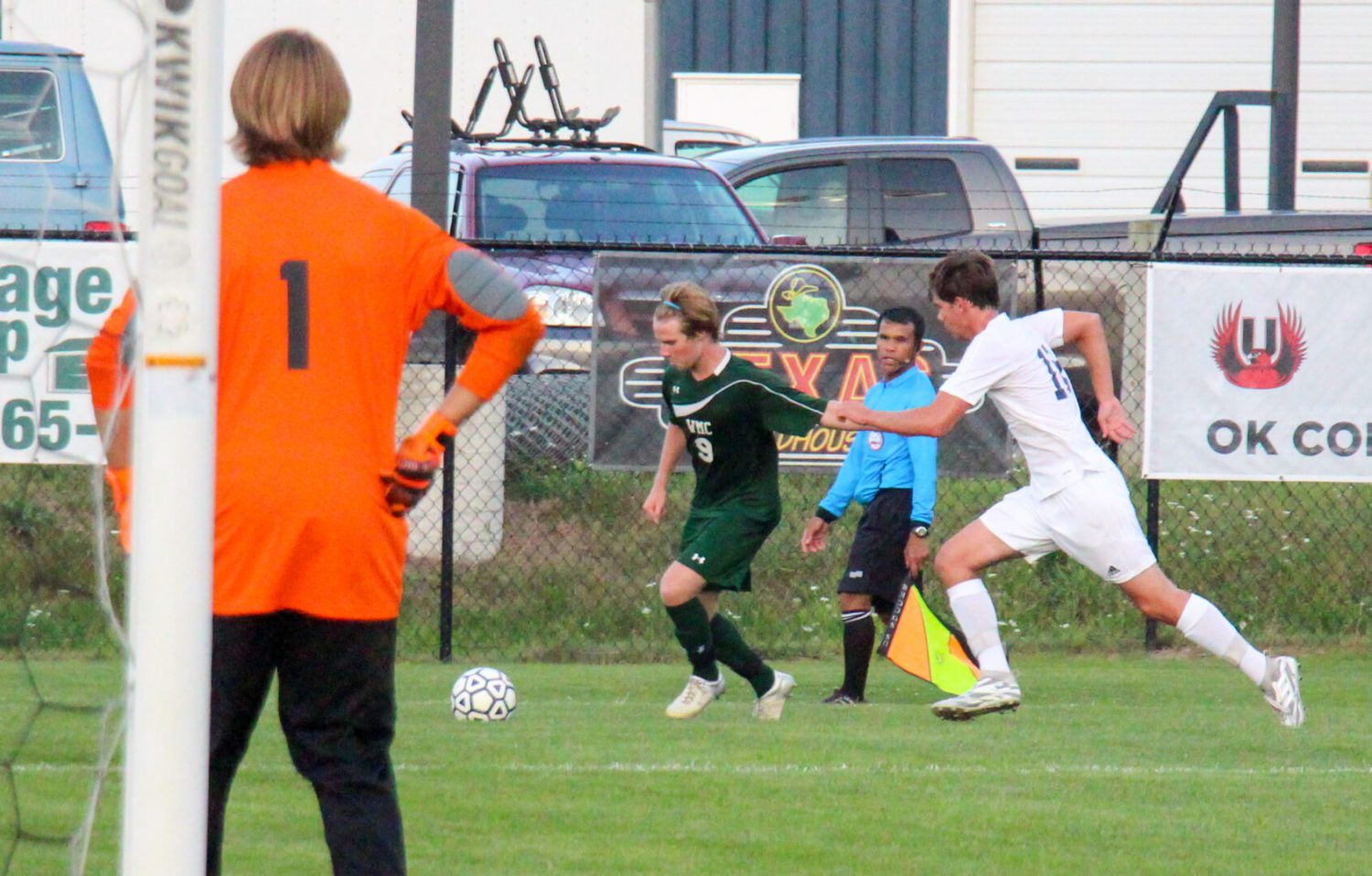 Tyler VanBeek gets ready to make a cross pass in front of Fruitport’s No. 13 Logan Fielding. Photo/Jason Goorman 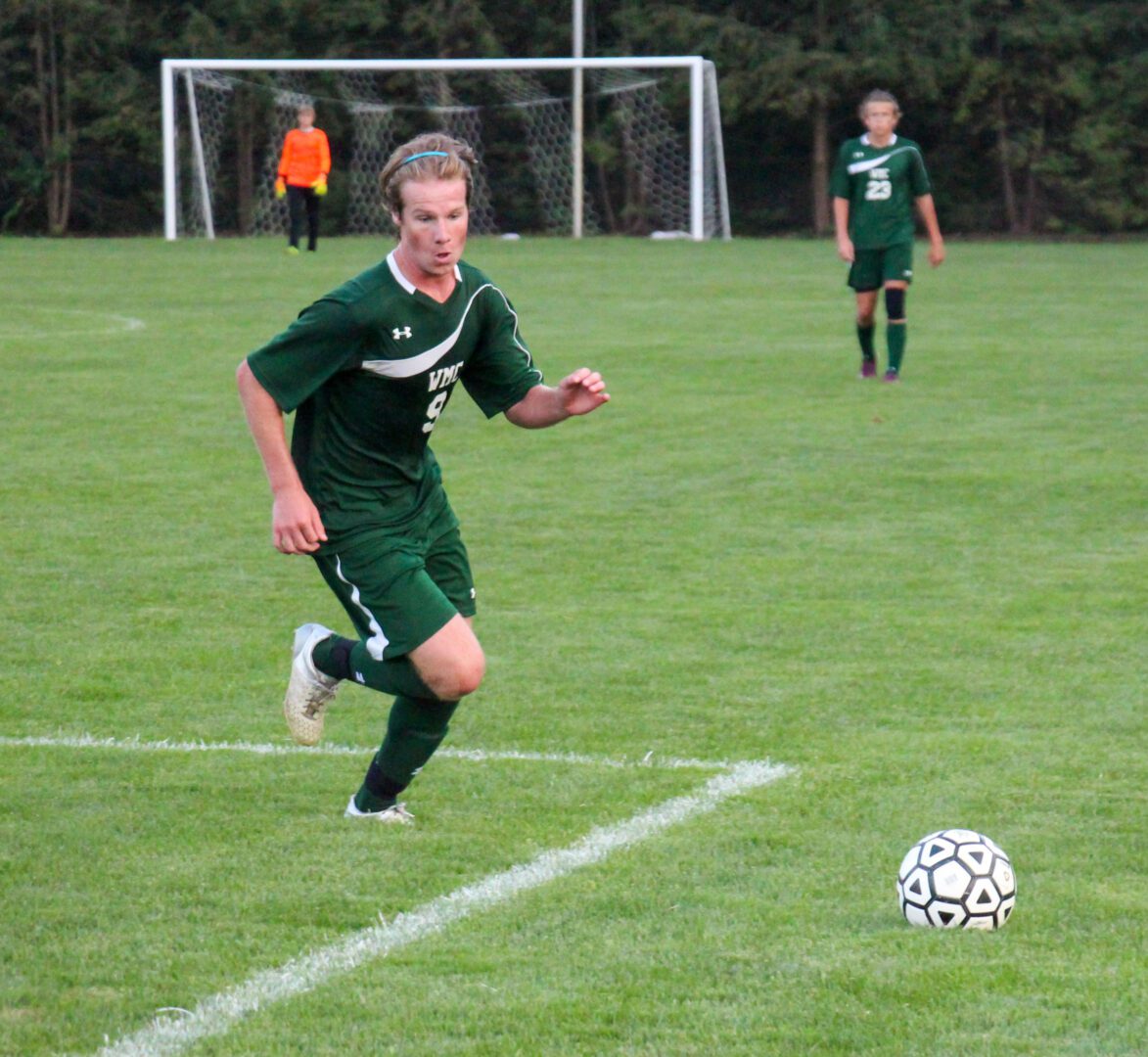 Tyler VanBeek tries to chase down the possession for WMC. Photo/Jason Goorman 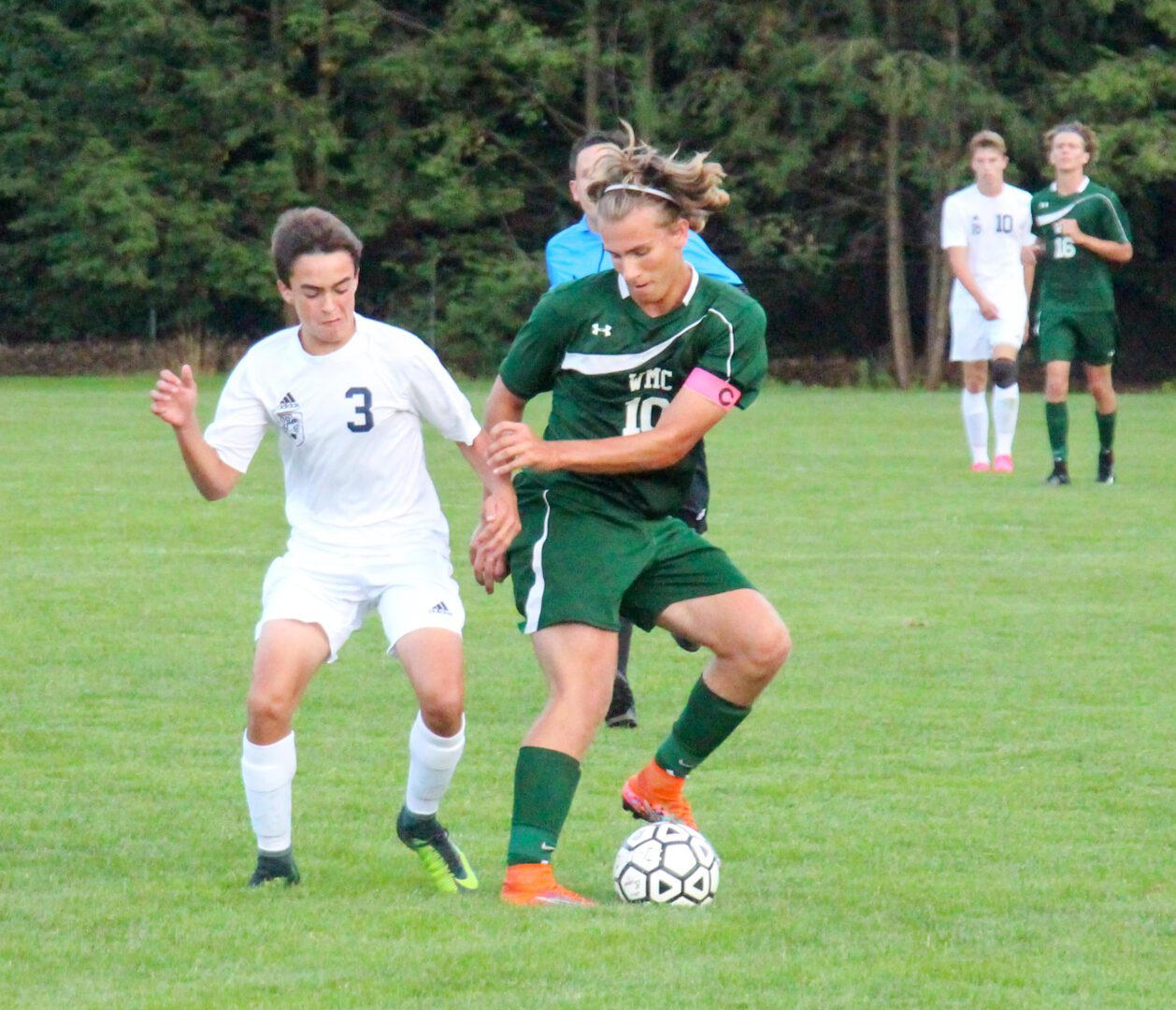 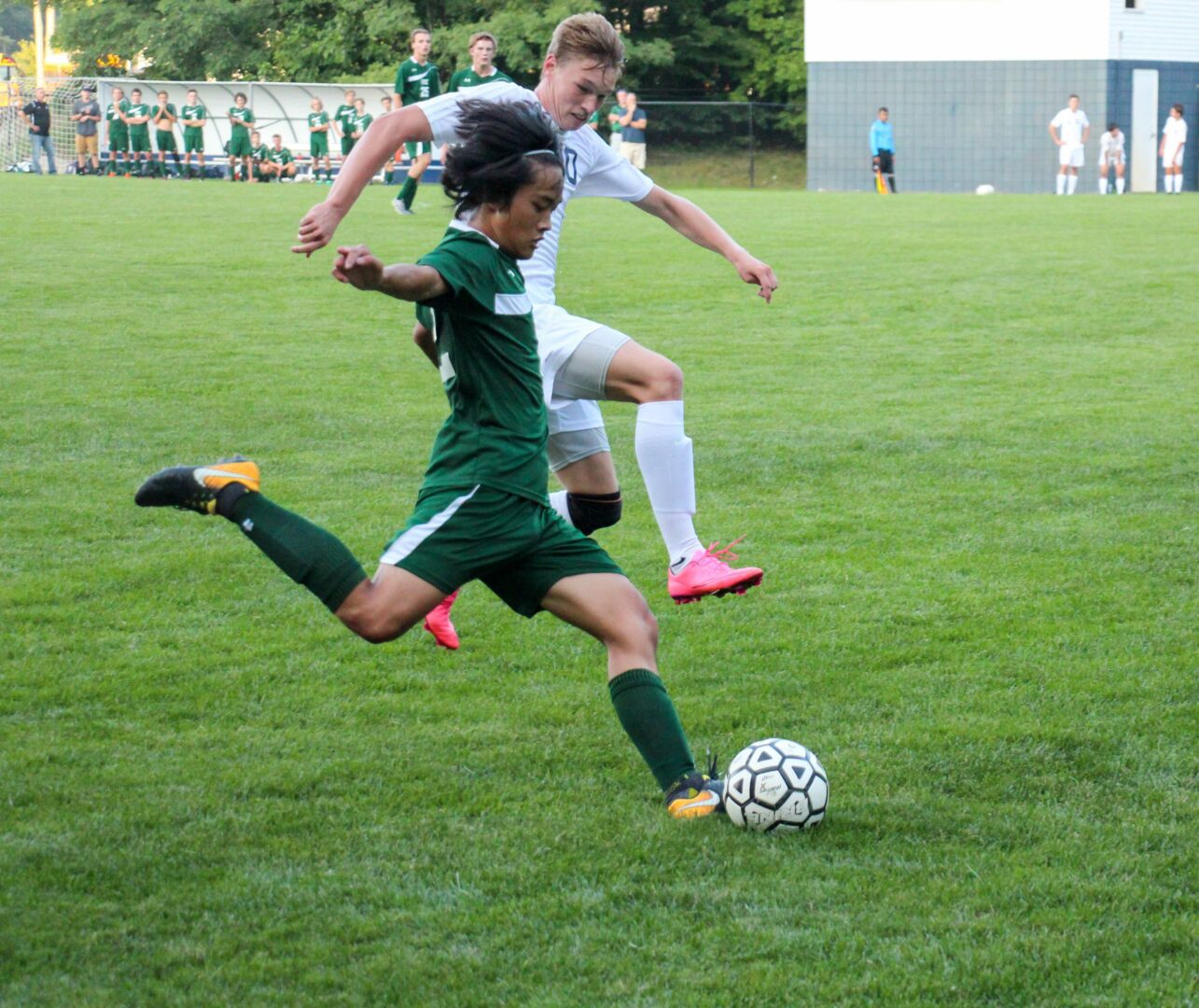 WMC’s Josh Paquin gets ready to send the pass before Zack Shane can make the steal. Photo/Jason Goorman 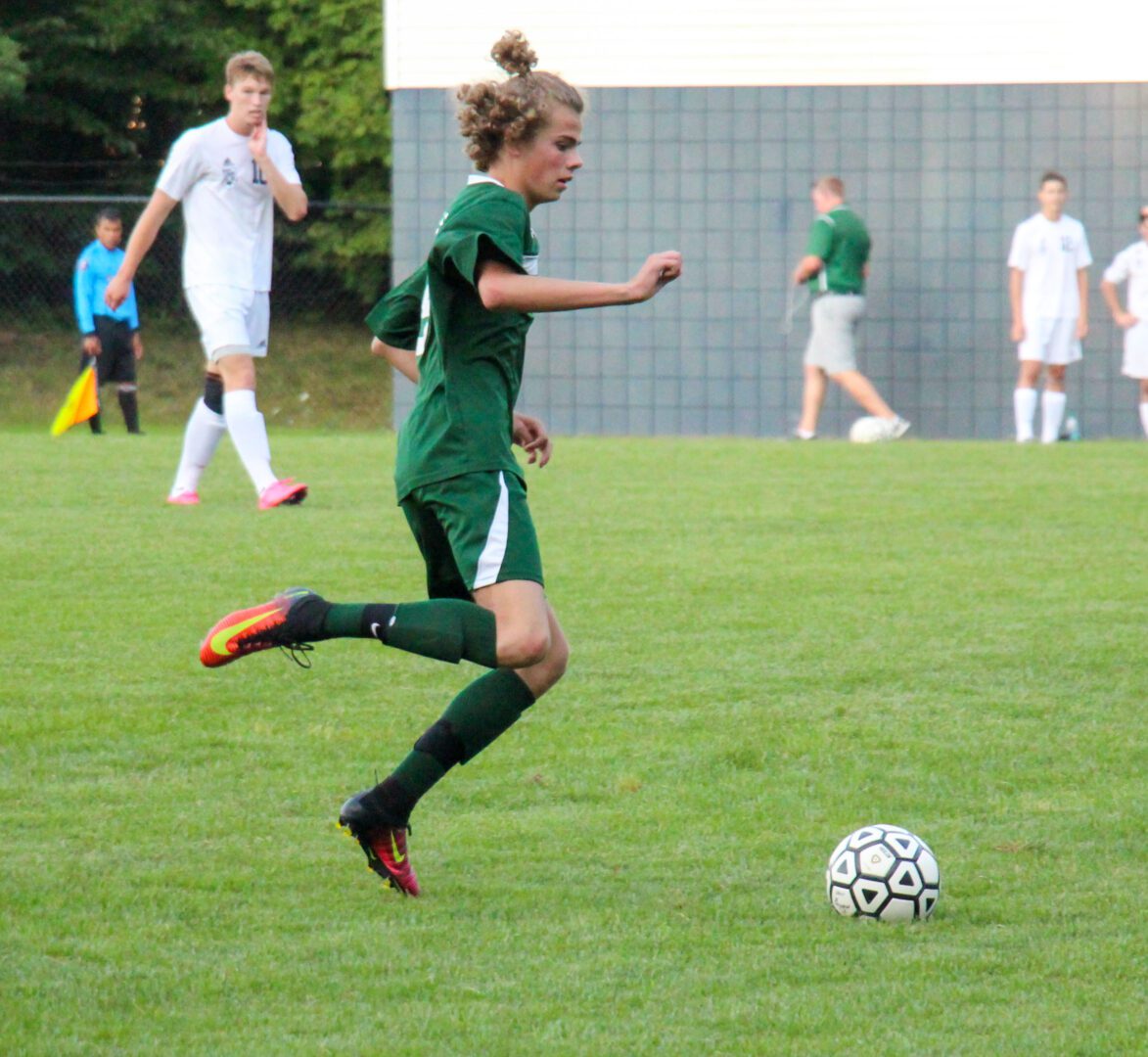 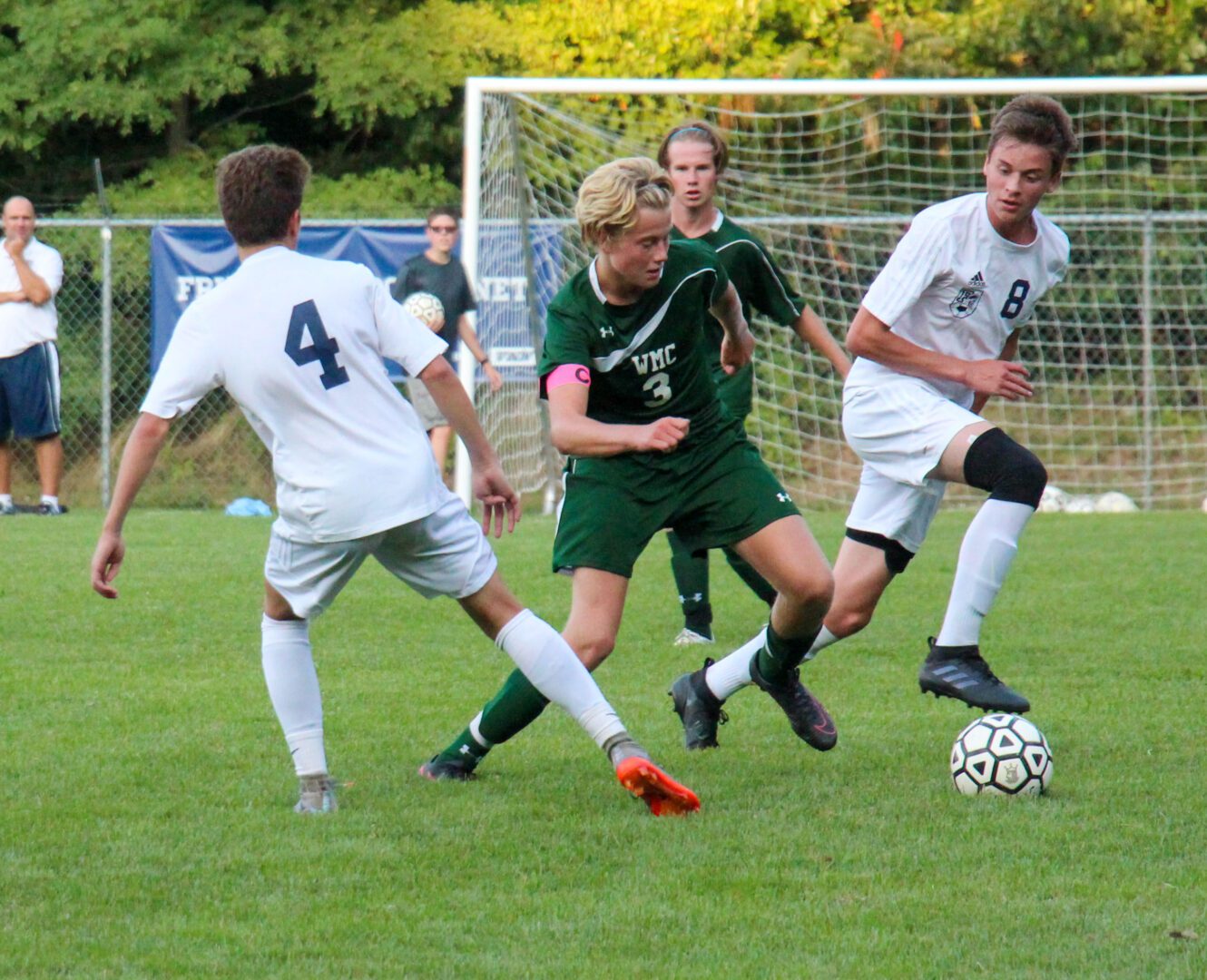