LSJ Spotlight Games Week 4: Either Shores or Puffer will have perfect record blemished

The Mona Shores and Reeths-Puffer football teams both missed the playoffs last season, and both are eager to return.

Both teams are off to very good starts in their pursuit of the postseason, with

But one team’s record will be blemished on Friday when Reeths-Puffer visits Mona Shores in a huge crosstown rivalry showdown. LocalSportsJournal.com will be on hand to cover all the action in one of three LSJ Spotlight Games this week.

LSJ will also have live coverage of Oakridge at Whitehall in a key West Michigan Conference contest, and Hesperia at Holton in a neighborhood rivalry game that’s always packed with emotion.

LocalSportsJournal.com will also have full reports from the other 12 games involving area teams on Friday, including an interesting matchup between visiting Muskegon and Byron Center, two undefeated teams.

Hold on to your hats, fans. Week 4 of high school football is bound to be a good one!

This could be a classic battle between the crosstown O-K Black Conference rivals, for several reasons.

Both teams come in at 3-0, and have high hopes for a banner season after coming up short last year. 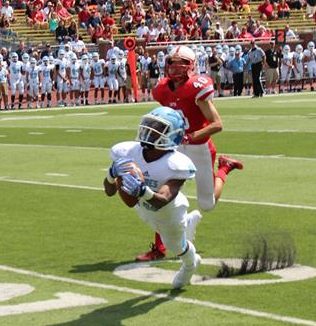 Keyshawn Summerville gets ready to haul in a big second-quarter catch for Mona Shores. Photo/Jason Goorman

The long series between the two schools is almost dead even. Reeths-Puffer has 21 wins, Mona Shores has 20 and there was one tie. The Rockets have won four games and the Sailors have won three since 2010. Four of those games have been decided by a touchdown or less.

Both teams will be eager for a rematch after last year’s dramatic finish at Reeths-Puffer.

Mona Shores led 34-33 with just under 10 minutes remaining, then hauled in an interception with 2:10 left to seemingly seal the victory.

Both teams are coming off impressive wins last Friday.

The Sailors thrilled a huge home crowd by beating Rockford 30-24 in overtime.

Wide receiver Keyshawn Summerville hauled in a 45-yard touchdown pass from quarterback Tristan Robbins with 56 seconds remaining to give the Sailors what they thought was a game-winning score. 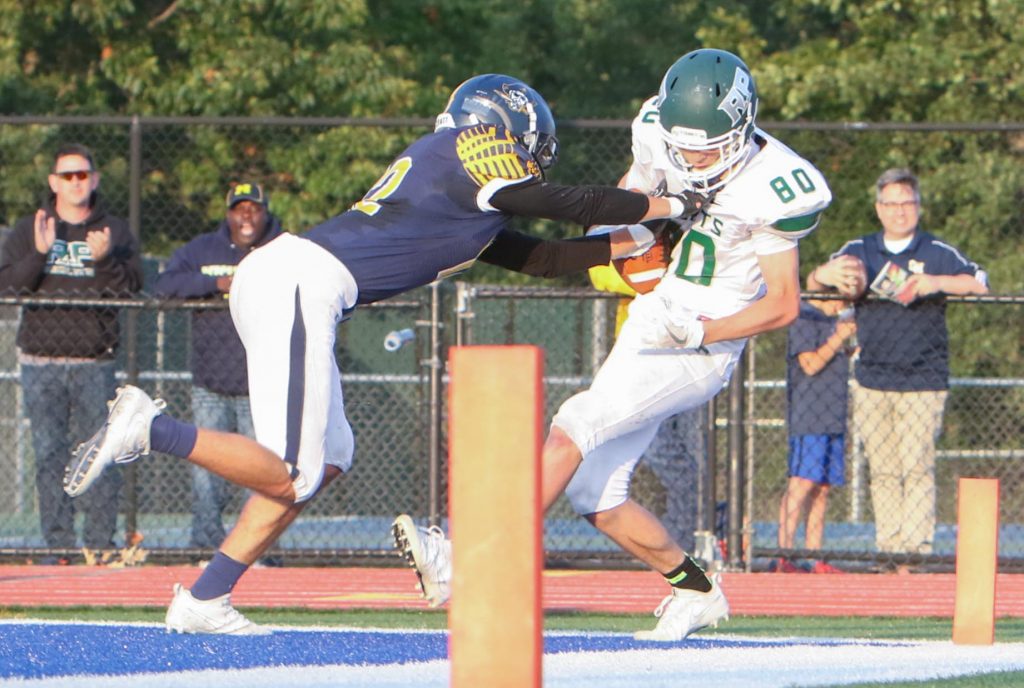 But Rockford hit a 35-yard field goal with eight seconds left to send the non-league contest to overtime.

Mona Shores finally got the win on a two-yard touchdown plunge by junior running back Sincere Dent in the first OT period.

Summerville finished with seven catches for 100 yards. Running back Dee Davis rushed for 91 yards on 15 carries, while Robbins threw for 104 yards and ran for 74 more on 14 carries.

Reeths-Puffer looked dominant in a 56-0 conference thumping of Grand Rapids Union on the road.

Moskwa completed 3 of 5 passes for 101 yards and ran for another 93 yards.

The Eagles and Vikings are two of the teams expected to dual it out for the West Michigan Conference championship.

Both teams are 2-0 in conference play so far. 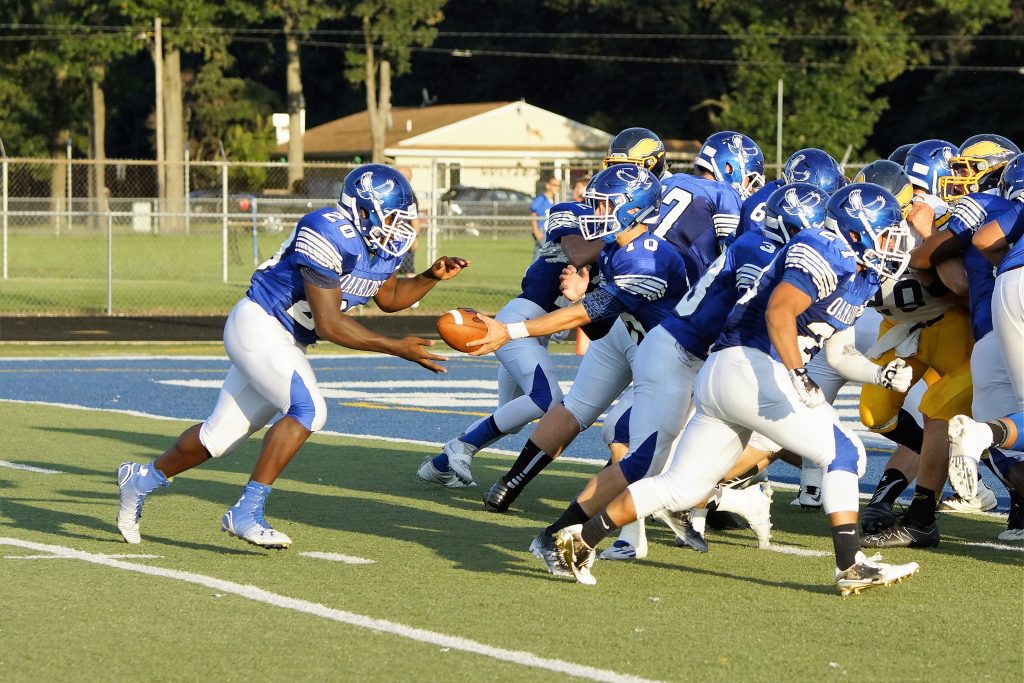 If history can be trusted, Oakridge should be confident, because the Eagles have beaten Whitehall 17 straight games. The Vikings’ last victory over Oakridge was in 1999.

The score was 14-14 at halftime, and Whitehall grabbed a 20-14 lead early in the third quarter. But Oakridge scored twice in the third to take a 27-20 lead.

Whitehall’s Terrell Harris scored from 13 yards out with 2:23 remaining, making the score 27-26.

Whitehall chose to go for the two-point conversion and was stopped at the goal line, leaving Oakridge with a one-point victory. 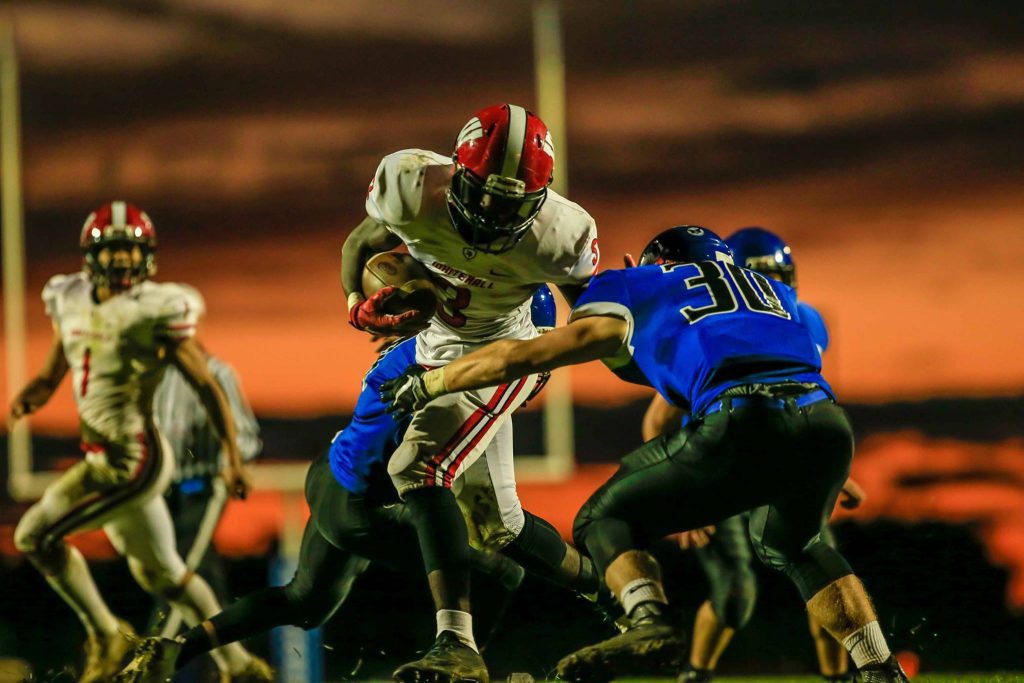 Both teams showed off their offensive firepower in big wins last Friday.

Sophomore running back Leroy Quinn carried the ball 17 times for 195 yards and scored five touchdowns in the Eagles’ 55-6 victory over Shelby.

They say you can throw out the records in big rivalry games like this one.

But in this case, one team’s record deserves a closer look. 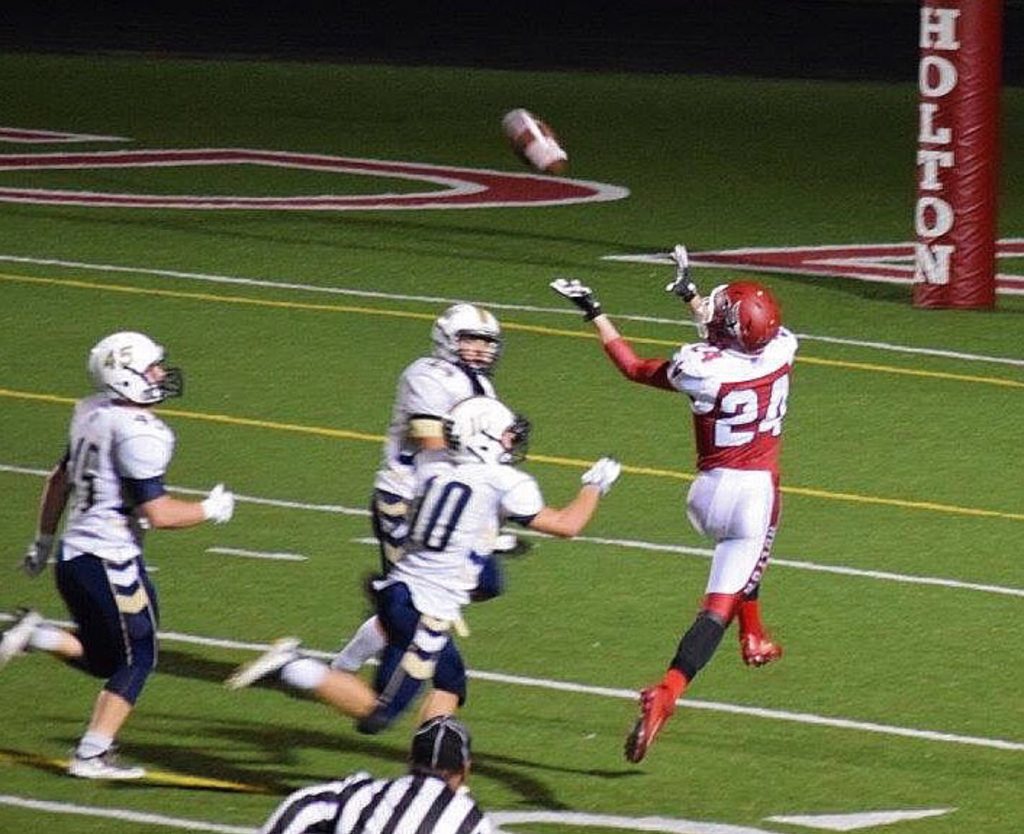 Hesperia has lost all three of its games this season, but two came in overtime against very good opponents.

The first heartbreaker came in Week 1, a 28-27 loss to North Muskegon. The game ended when the Panthers failed on a two-point conversion attempt in overtime.

Last week Hesperia dropped a 22-14 decision in OT to Morley-Stanwood.

The game was tied 14-14 with 6:58 remaining in the fourth quarter. Hesperia tried to win with a field goal as regulation expired, but missed to force overtime.

Morley-Stanwood scored a touchdown and two-point conversion on its overtime possession, and Hesperia failed to muster a touchdown, ending the game. 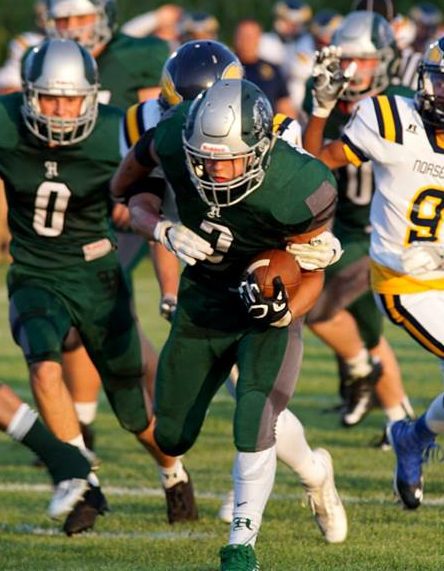 Kanin Witte makes a rush up the middle for Hesperia. Photo/Leo Valdez

Kanin Witte led the Hesperia offense with 111 yards on 25 carries, while Gerritt Yates had 85 yards on 19 carries.

Holton showed a lot of life in the first half last week against a good Kent City squad, and only trailed 6-0 at halftime. But the Eagles ran away in the second half for a 34-6 CSAA Silver Division victory.

Mitchell Erickson scored the lone touchdown for Holton, recovering a fumble for a 35-yard score.

The Red Devils were led by Derek Pouch, who ran for 83 yards on 14 carries. Aaron Herron added 48 yards on 13 carries.

Hesperia leads the series against Holton 10-8 since 2000.

The Panthers have won six of the last seven games, including last year by a 54-6 margin. Prior to that Holton beat Hesperia six straight years.

Fruitport volleyball has a tough Saturday, goes 0-3 against local teams