MUSKEGON – According to the official statistics, it was just one assist on one goal in the Muskegon Lumberjacks’ 3-2 road win over the

But for Bobby Kaiser, it was a very big assist, because it was his first point in his last two seasons with the Lumberjacks.

But on Saturday he finally registered that long-awaited point when he was credited with an assist on a goal by teammate Egor Afanasyev with about seven minutes left in the second period, giving the Jacks a 2-0 lead.

“I shot the puck, he was driving toward the goal, and it found his stick and he chipped it in,” said Kaiser, 20, who grew up in Grosse Pointe Park, Michigan. “It was kind of exciting to get that first one out of the way. Now I can try to produce more.”

The Lumberjacks, 2-3 on the season, will return to action on Friday night with another game in Youngstown, before returning home to host the Phantoms on Saturday at 7:15 p.m.

Kaiser started his rookie season in the USHL with the Tri-City Storm in 2015-16, then was traded to the Lumberjacks in November, 2015. He played 39 games for the Jacks that year, getting one goal and two assists, but Muskegon failed to make the playoffs. 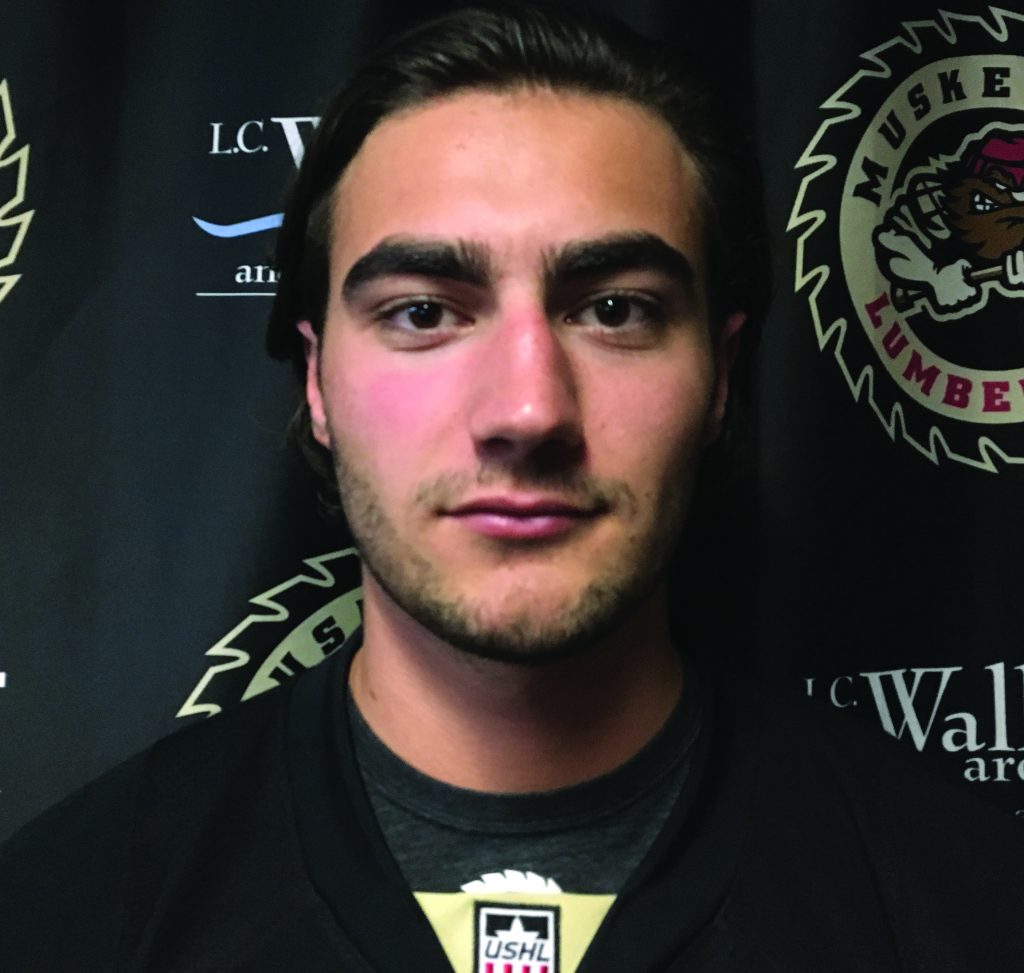 He returned to the Jacks last fall and played in 27 games, before a dislocated shoulder ended his season prematurely.

“I had surgery on my shoulder in my senior year of high school, then I had a good recovery and made it through my first season (in the USHL) with no problems,” Kaiser said. “Last season I kind of aggravated it a bit when I got into a fight in Bloomington, and it felt kind of similar to the way it felt before.

“I was trying to battle through it and finish the season, then we had a game last January against Chicago when it came out of the socket and stayed out. I was battling for the puck, got cross-checked from behind, braced myself on my stick and all of my weight went to my shoulder.

“I was more in shock when it first happened, but it hurt a lot more the next day. I got an MRI and found out I needed another surgery.”

Kaiser’s season was over, and he had to sit and heal while watching the Lumberjacks finish second in the USHL Eastern Conference and qualify for the playoffs, before being eliminated by Dubuque in the first round.

“It was very frustrating,” Kaiser said. “It was tough watching the team play and battle while I sat in the stands. I was pretty bummed out.”

Kaiser threw himself into rehab this summer, and is healthy and ready to experience success in his final season in the USHL. Next fall he will study and play hockey at the University of Massachusetts-Amherst.

While he knows he will never be a top-scoring forward, Kaiser said he would like to develop into a more well-rounded player and contribute more points this season.

He knows that college hockey rosters are full of talented players competing for ice time, and he will get more opportunities if he can become more versatile, mixing his gritty style with more point production.

“Bobby works very hard and he can shoot the puck,” he said. “The injuries have been tough on him, but I expect him to help with scoring. He is a good-sized player that you will see in front of the net more this year.”

The Lumberjacks made several early-season moves this week to bolster their lineup.

Perhaps the most significant addition to the roster is Clayton Phillips, a standout second-year defenseman who was acquired from the Fargo Force on Tuesday in exchange for future draft picks and a player to be named later. 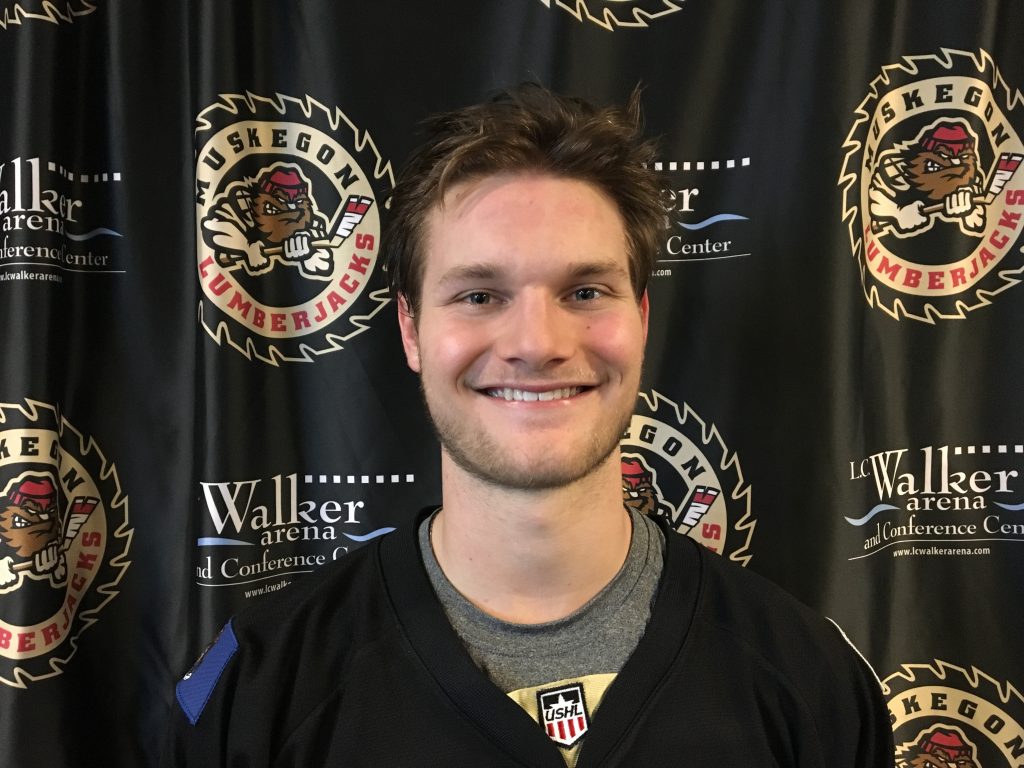 Phillips was a 1st-team USHL All-Rookie selection last year, totaling seven goals and 13 assists in 57 games. Following his fantastic rookie year, Phillips was selected in the third round of the NHL draft by the Pittsburgh Penguins.

In three games this season, Phillips has three points, including two on the power play. Muskegon’s power play has scored just one goal so far this season, and Phillips is poised to give the man-advantage an immediate boost.

The Edina, Minnesota native stands 5-foot-11, weighs 188 pounds, and is committed to the University of Minnesota.

“I’ve been working really hard on this,” said Lumberjacks General Manager John Vanbiesbrouck. “We had an opportunity to get a top defenseman in this league in Phillips and we were able to make it happen. I’m pretty excited.”

In another big move, the Lumberjacks acquired a new backup goalie, Keegan Karki, who had been without a team since being released by the Omaha Lancers in the preseason. 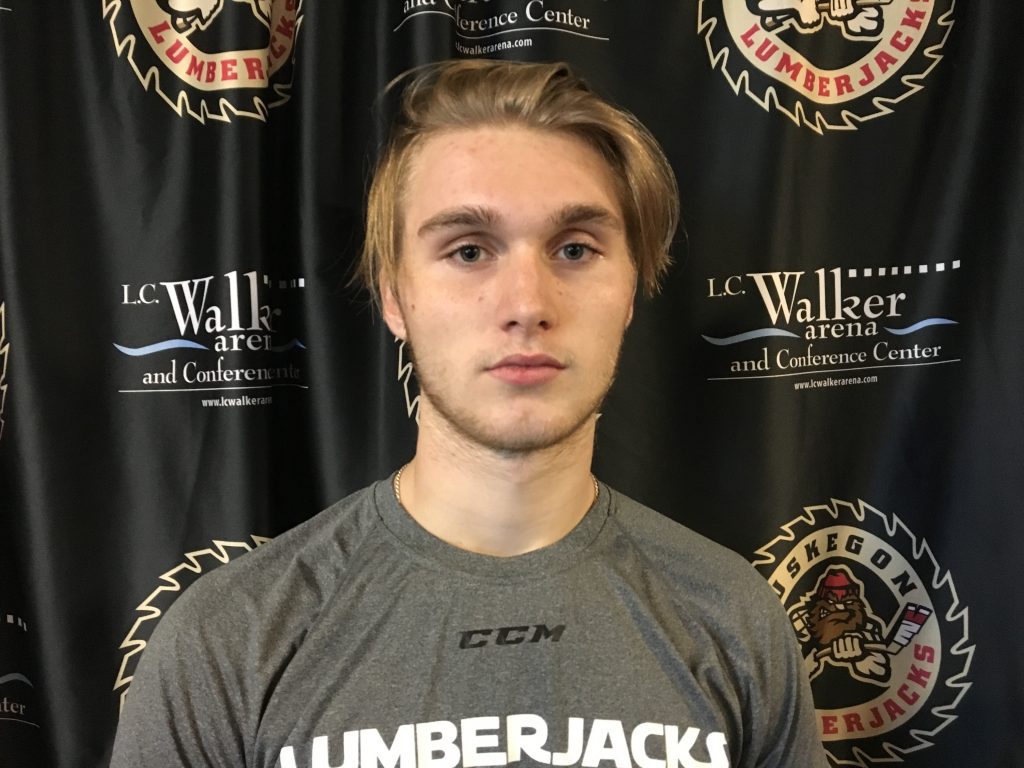 Karki spent time with the Team USA Under 17 squad last season and struggled a bit, posting a 1-14-1 record with a 4.46 goals against average. He will replace former backup goalie Matt Vernon, who was released by the Lumberjacks after playing only one period and giving up four goals this season.

In a separate deal with Fargo, the Jacks acquired forward Dante Sheriff in exchange for cash and a future draft pick. Sheriff played for the Brampton Bombers in the Greater Ontario Junior Hockey League and scored 44 points in 46 games while racking up 100 penalty minutes.

The Lumberjacks also sent defenseman Travis Mitchell to the Omaha Lancers in exchange for defenseman Nic Belpedio, who currently plays in a lower league and will be placed on the Jacks affiliate list (similar to minor league players in pro sports). 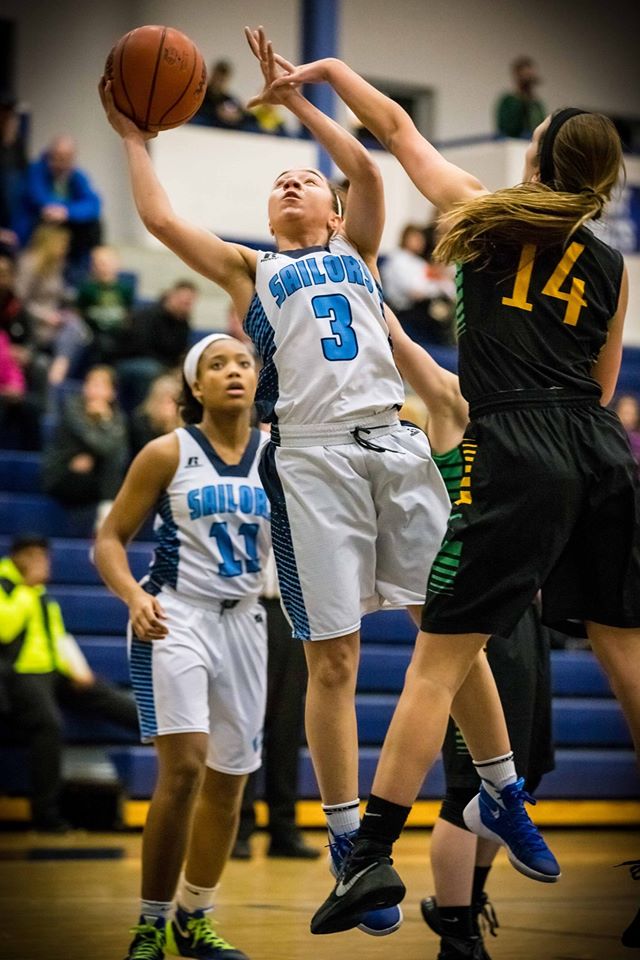