NORTH MUSKEGON – Logan Diehm has been a member of the Whitehall varsity soccer team for the past four years.

The first two years he and his teammates were West Michigan Conference champions. Last year the

They apparently wanted it back pretty badly, or at least a share of it.

That was obvious on Wednesday, when Diehm scored twice to lead the Vikings to an impressive 4-0 victory over North Muskegon in the West Michigan Conference tournament championship game on the Norsemen’s home field.

Whitehall regained a share of the league title by winning the tournament. North Muskegon won a share by finishing on top of the regular season standings. 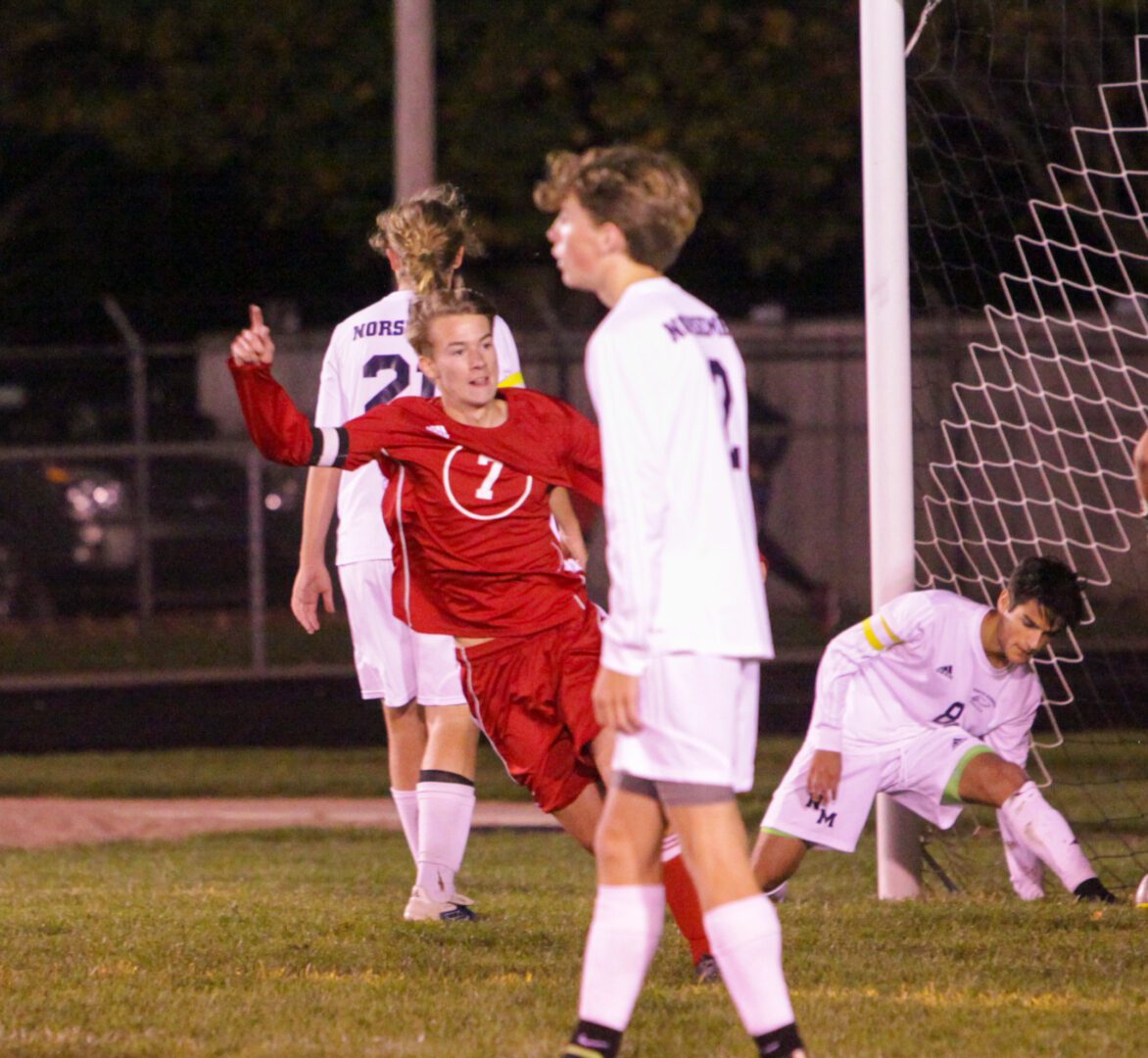 Both teams finished with 8-1 conference records.

“We lost last year, and we really wanted it this year,” said Diehm, a senior forward who leads the Vikings with 21 goals this season. “We had the motivation.”

Whitehall Coach Bryan Mahan said he always tells his players to forget about the previous year, and decide what they want to accomplish each new season.

But he admitted his team came in hungry to beat the Norse and gain some revenge for a 1-0 loss earlier in the season.

“We were at full strength, and the guys were fired up to play,” said Mahan, whose team won at least a share of the previous nine league championships, prior to last season. “The first time we played (North Muskegon) we were down a few players, they outplayed us and they deserved to win. Tonight we came out and played the way we wanted to play, and did a great job.”

Whitehall came out flying in the first half, controlling the pace and outshooting the Norse 9-4. 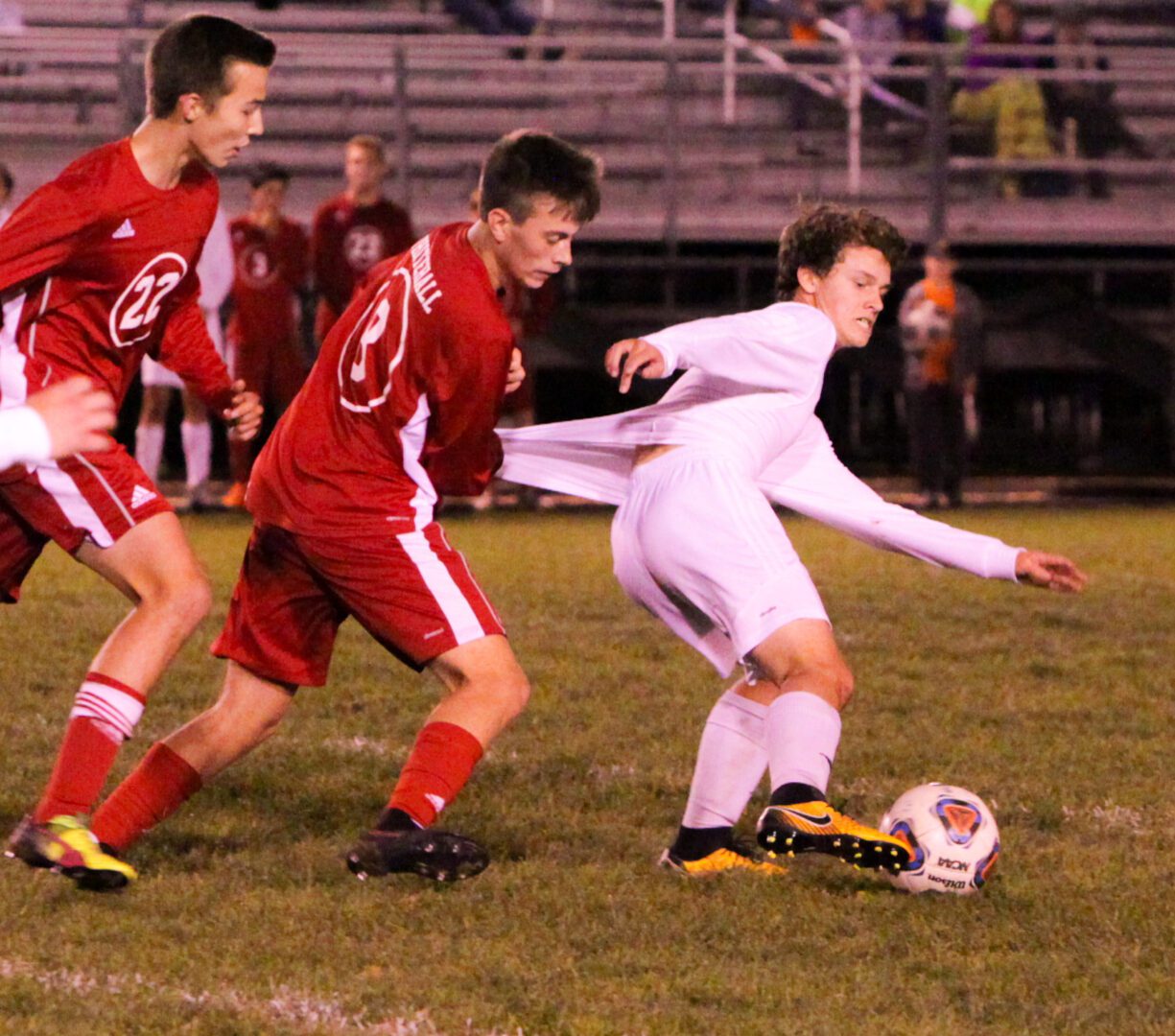 Ian Horning gets his hand caught in the shirt of North Muskegon’s Parker Kersman while No. 22 Taden Brandel trails behind the play. Photo/Jason Goorman

The Vikings led 1-0 at halftime after collecting a goal from Noah Smith with about three minutes left in the half.

They could have had a bigger lead at the break, but three of their shots hit the North Muskegon goalpost.

“We definitely were in the mood to hit that post,” Mahan joked. “It was not annoying at all. We had good shots, good placement, but were just an inch or two off.”

Whitehall opened the floodgates in the second half, collecting three goals in the first 10 minutes. The first came from Joshua Gonzalez, then Diehm scored twice to nail down the victory and a share of the league title for the Vikings.

Joshua Gonzalez, Collin Mahan and Murray Andree had assists for the Vikings.

Whitehall outshot the Norse 5-0 in the second half and 13-4 in the game. Goalkeeper Josh Bosio made several good saves to collect the shutout.

“We’ve been healthy for about two weeks now, so we’re starting flow well, people are moving the ball and finishing,” said Mahan, whose team is 12-7-2 overall. “We’re just poised and playing well.”

North Muskegon finished the regular season with a 9-8-1 overall record.

“We knew they were aggressive, and they had a lot more to lose today than we did,” said Norse Coach Jeremy Tjapkes. “We already had a share of the championship.

“They are a good team, we have a couple of injuries, and we’re just trying to get better before districts.” 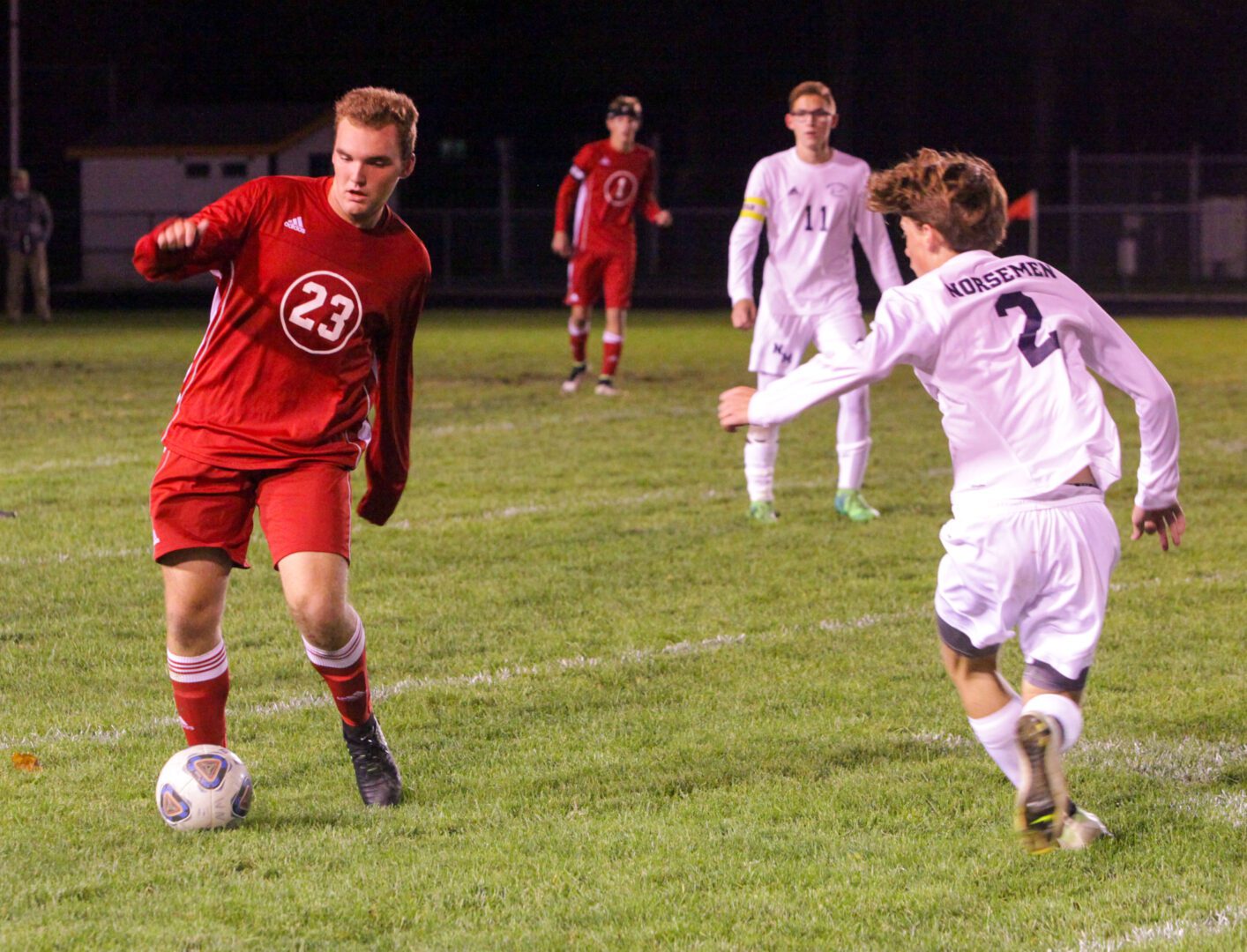 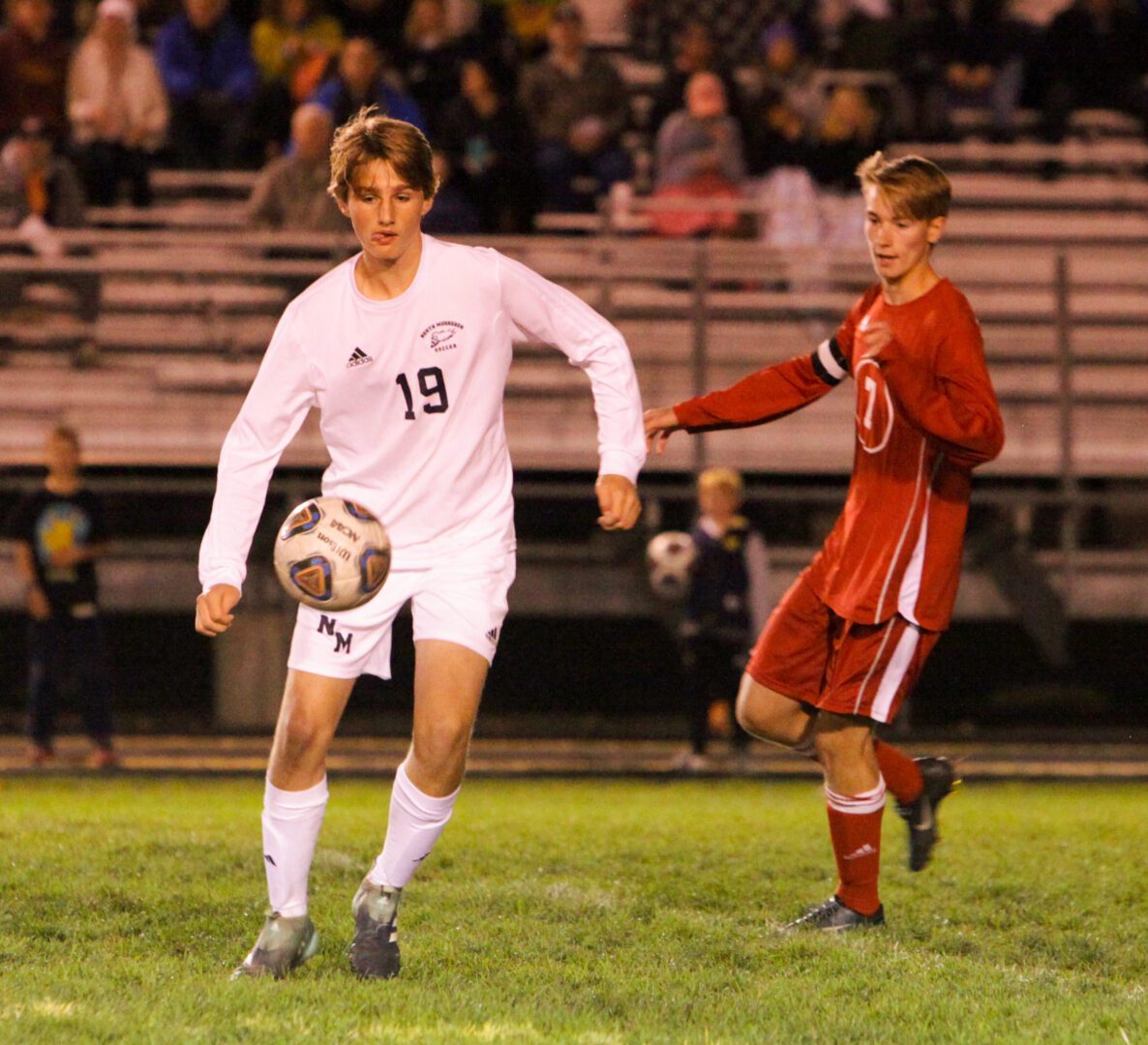 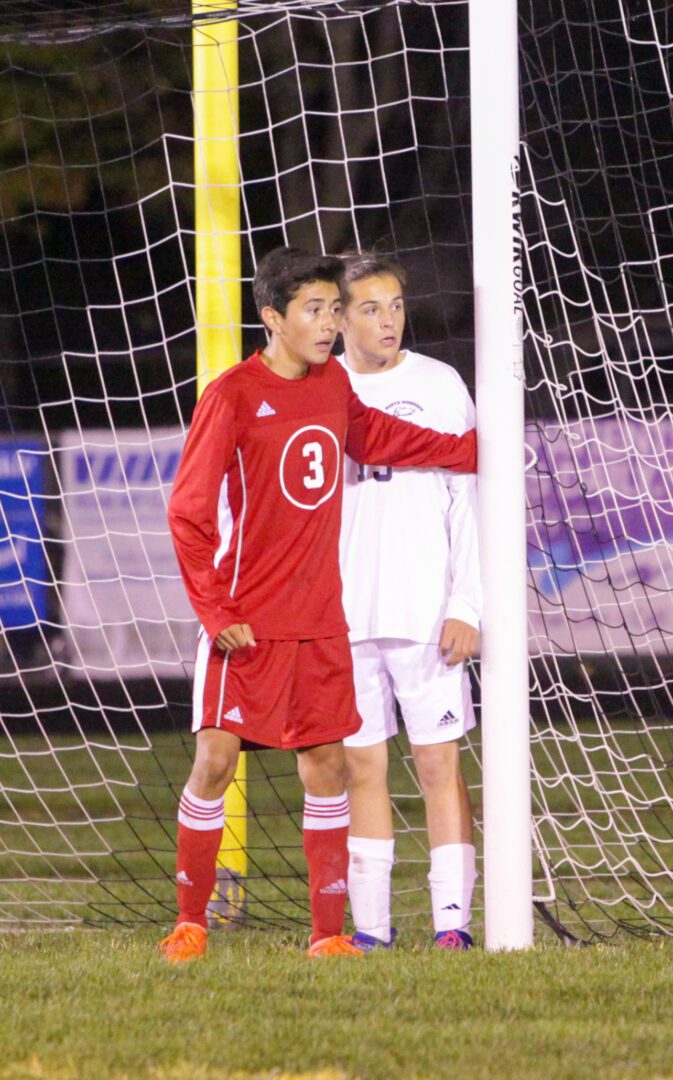 Whitehall’s No. 3 Joseph Gonzalez tries to get inside the post with North Muskegon’s Matt Kraley. Photo/Jason Goorman 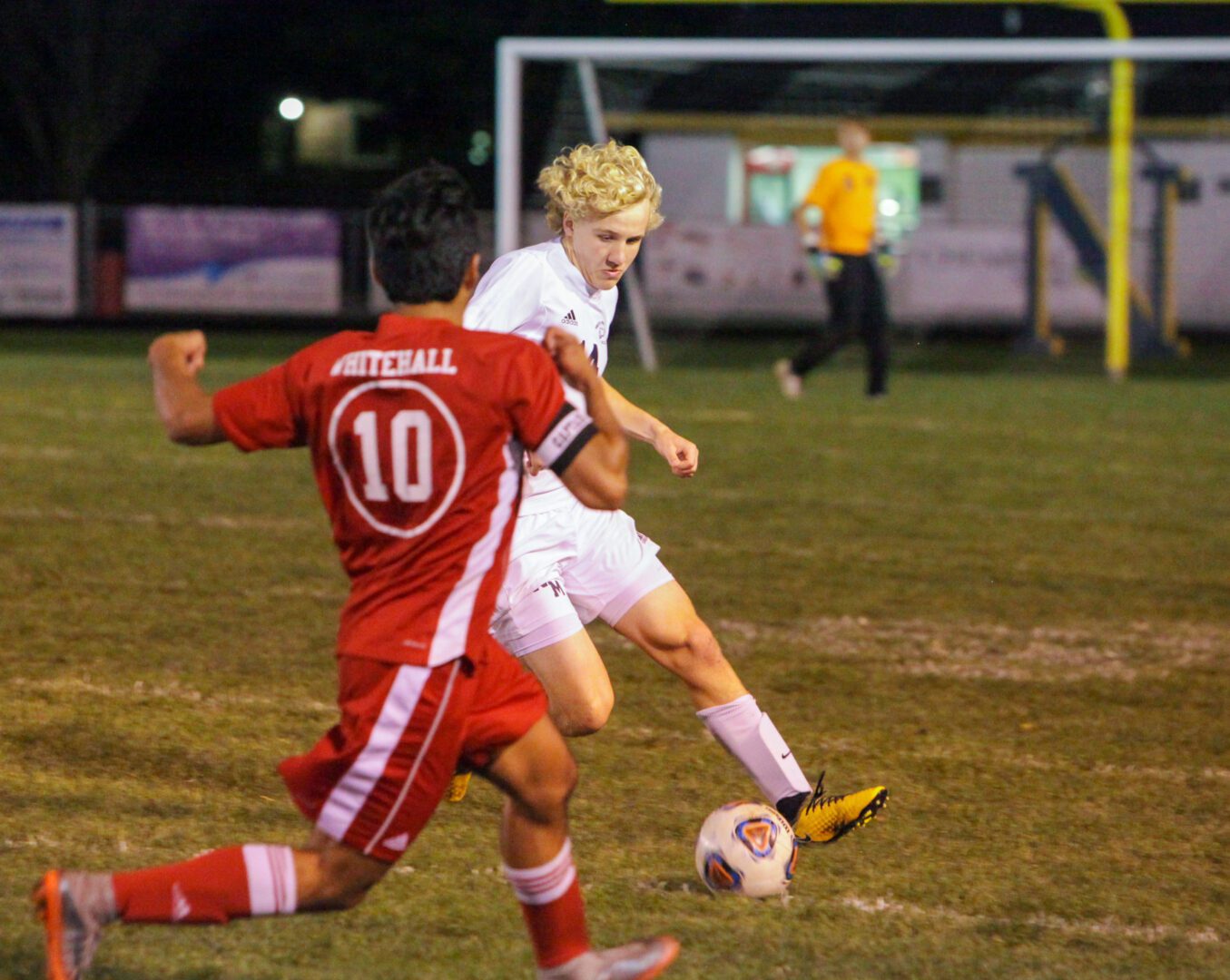 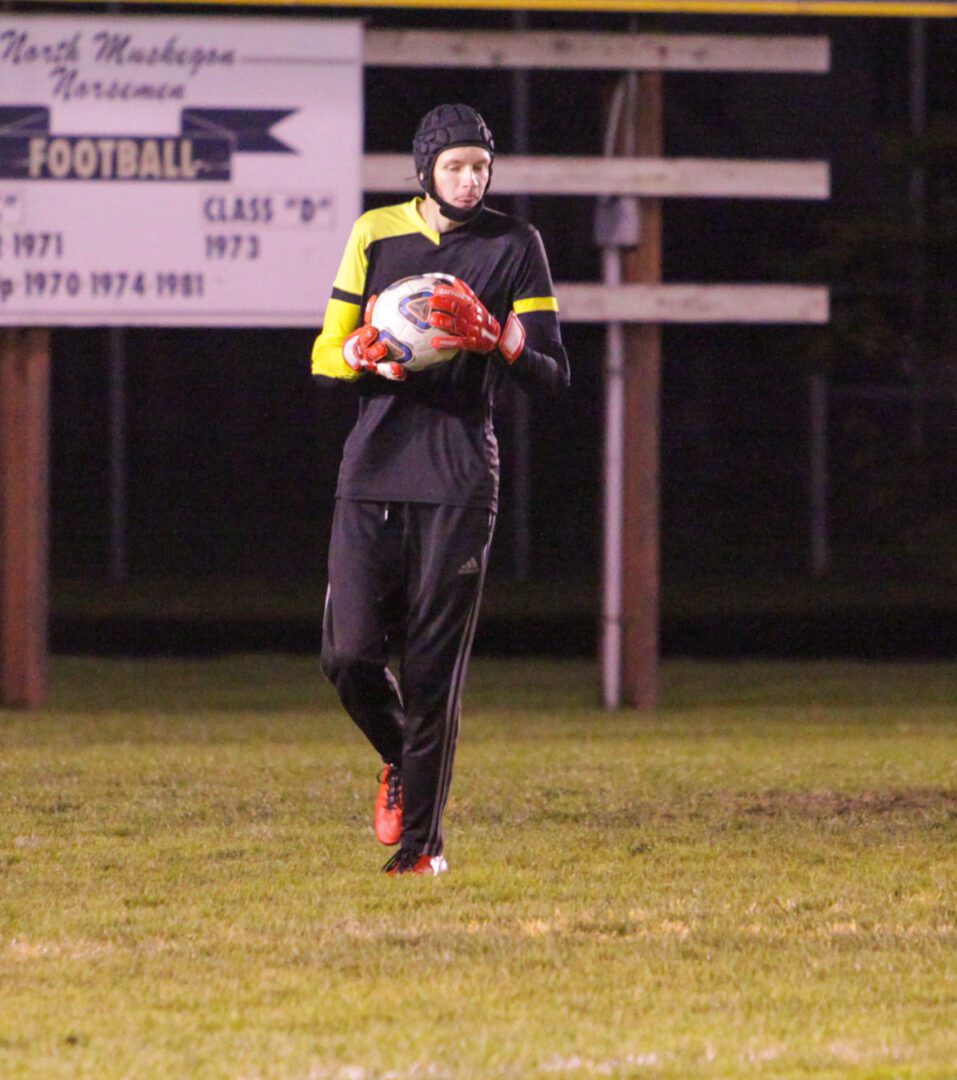 Josh Bosio makes the save for Whitehall. Photo/Jason Goorman 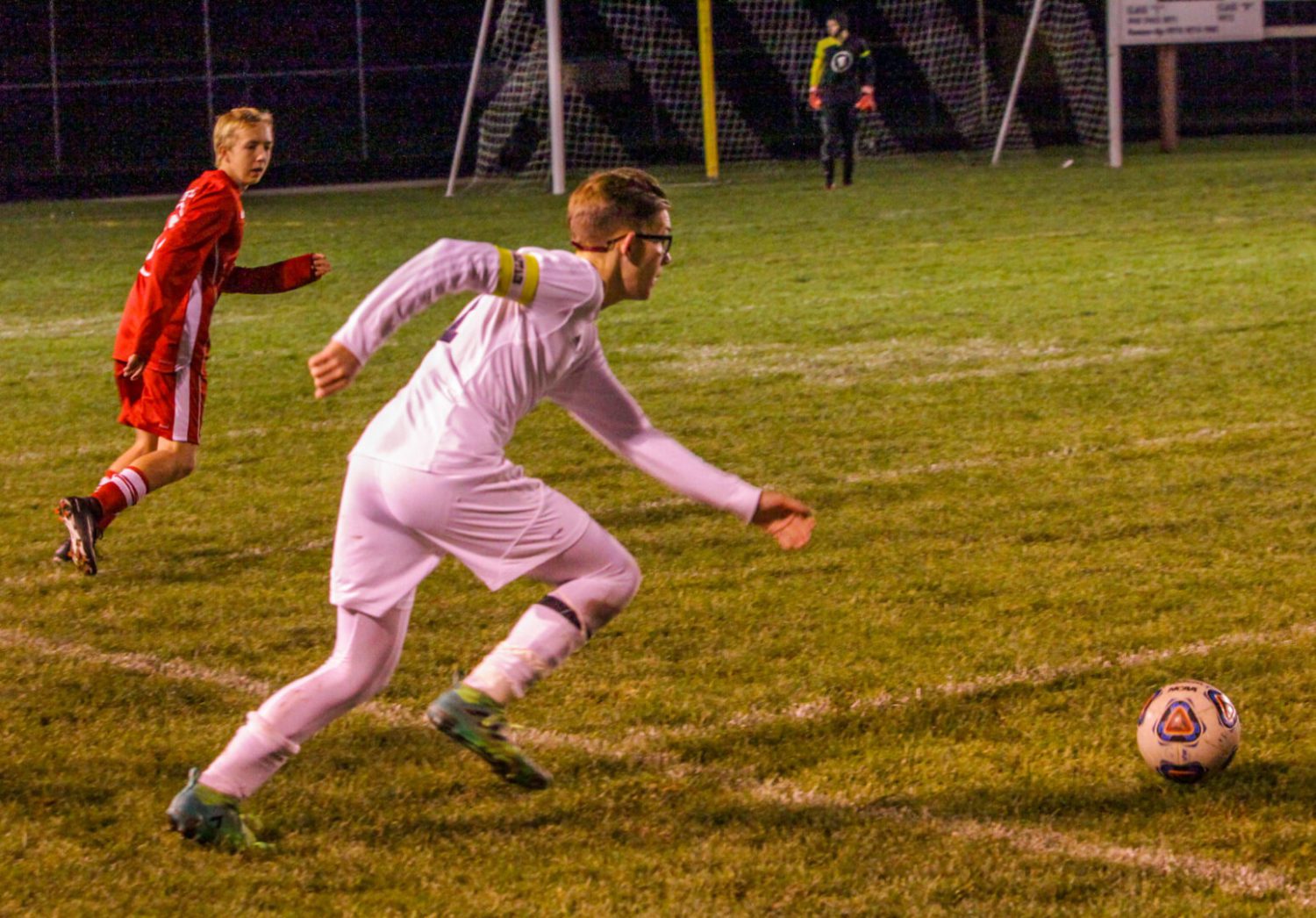 Dylan Hoffman makes a cut toward the middle of the field for North Muskegon. Photo/Jason Goorman

Jayhawks get first road win of the season