MUSKEGON – The Mona Shores and Reeths-Puffer hockey teams both stepped onto the ice at the L.C.

Walker Arena Wednesday looking for their first win of the season.

Now both teams will have the holiday break to figure out how to get that done the next time. 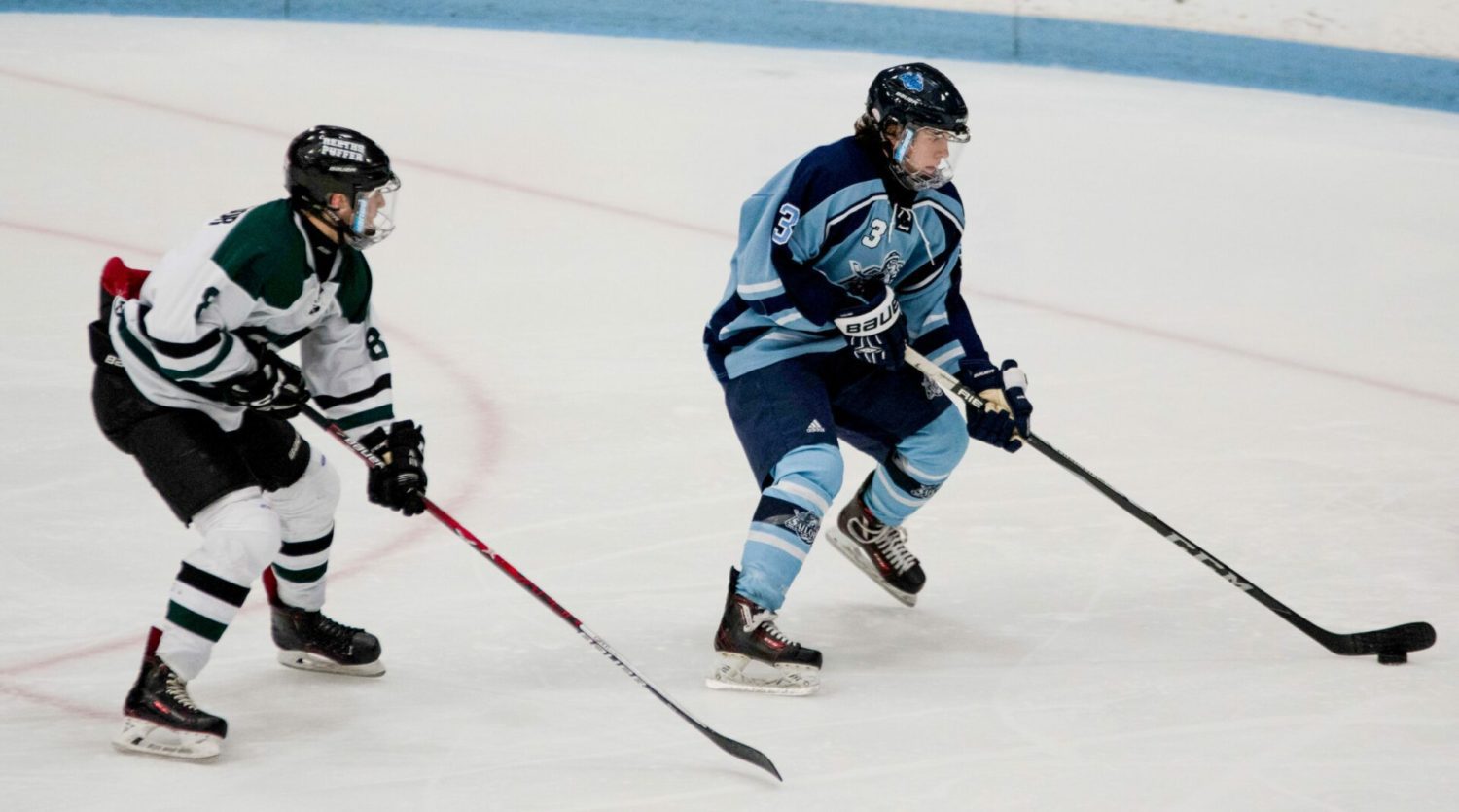 Erick Hannahs fights to the get the puck out of the Mona Shores zone while No. 8 Rylee Bonjernoor looks to attack. Photo/Mitchell Dixon MSD Photography

The Sailors built an early lead and the Rockets battled back late, and the teams skated to a 4-4 O-K Conference Tier 1 tie.

The Sailors’ Spencer Anderson answered, scoring on a wrist shot just a second after the Rockets had killed off a Shores power play, and the first period ended with a 1-1 tie.

Caden Brainard picked off a Sailor pass, walked in on goal, and went to the backhand for a short-handed goal that tied the game at 2-2.

Mona Shores went back on the power play two minutes later. Once again, the Rockets killed it off, but once again Shores scored a second after the power play expired on Justin Winegar’s goal, giving the Sailors a 3-2 lead. 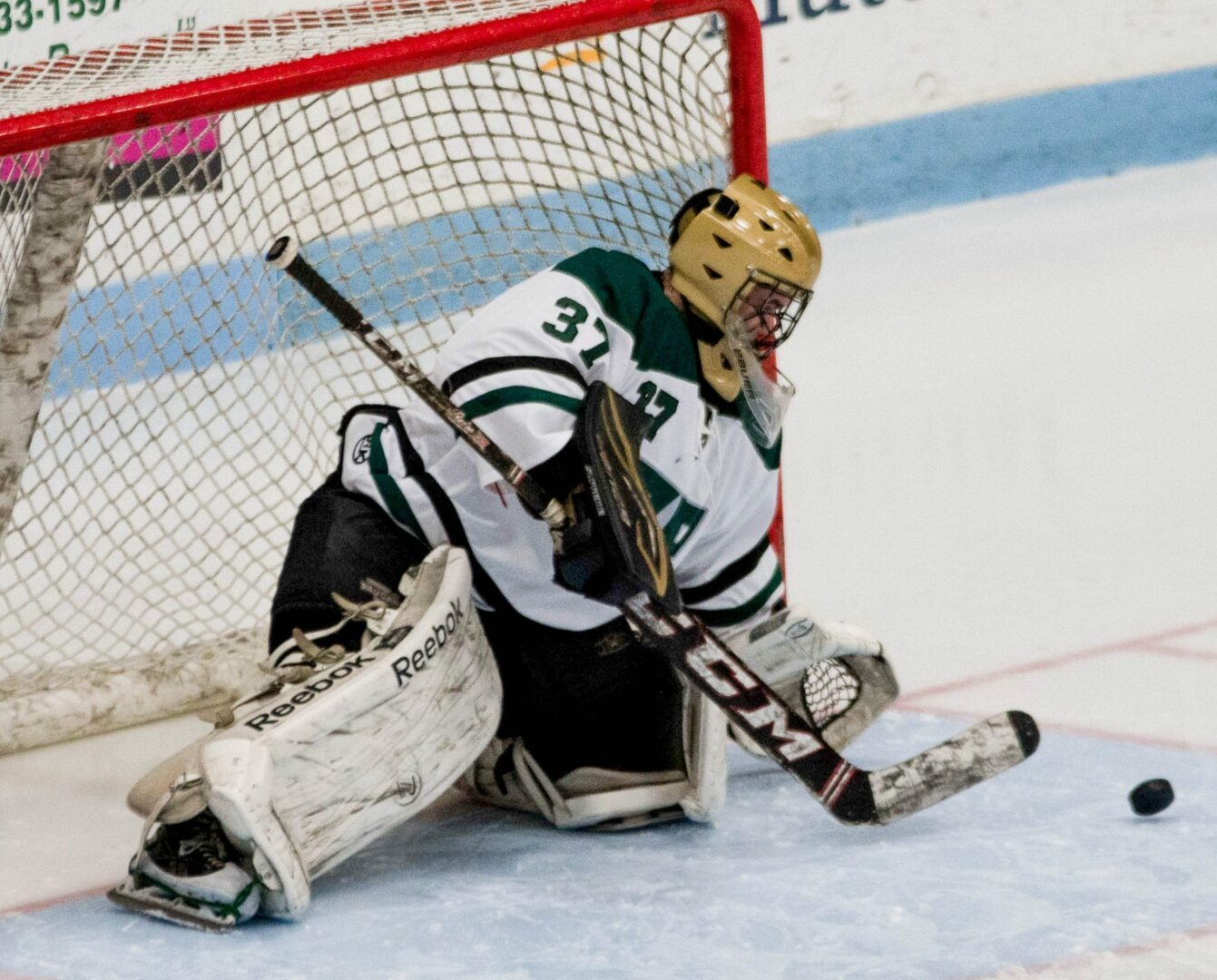 “We’re trying to learn how to win,” Rockets coach Bill Zalba said. “We’re doing a lot of good things, but we’d kill off a penalty and they’d score right after. It shows you, we have to play to the final buzzer.”

Erick Hannahs gave Mona Shores a 4-2 lead heading into the third period with a goal with just 0.2 seconds left in the second period.

Despite the deficit, Reeths-Puffer bounced right back in the third period, pulling within 4-3 on Convertini’s second goal of the game just 1:24 into the third.

With 6:18 left in the game, Puffer tied it when Reid Sayles scored a power play goal off a loose puck in front of the net.

The Rockets controlled the action in the third, outshooting Mona Shores 13-2 in the period.

Mona Shores, which had a 5-2 power play advantage, had one last chance with a man advantage with 1:27 left in regulation, but came up empty to end the period.

Both teams finished with three shots in overtime, but nobody could break the deadlock.

“We worked the puck really well and we did a good job of getting shots,” Shores coach Dan Quaine said. “I thought for the first two periods we played really well. We had a couple of mistakes they took advantage of, but we skated hard.”

Reeths-Puffer finished the game with a 39-27 shot advantage. Rylee Bonjernoor and Reid Sayleseach  had two assists for Reeths-Puffer. 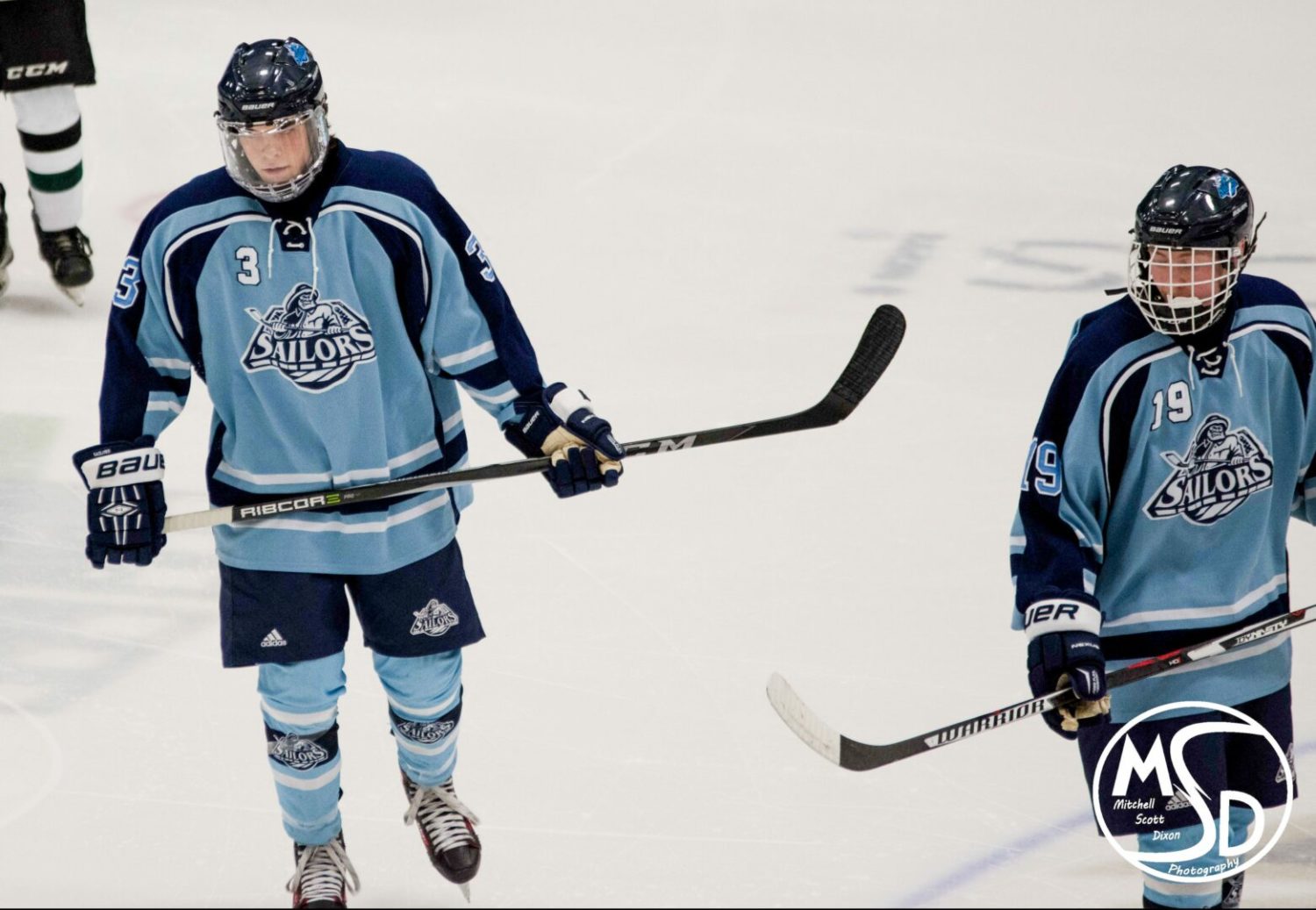 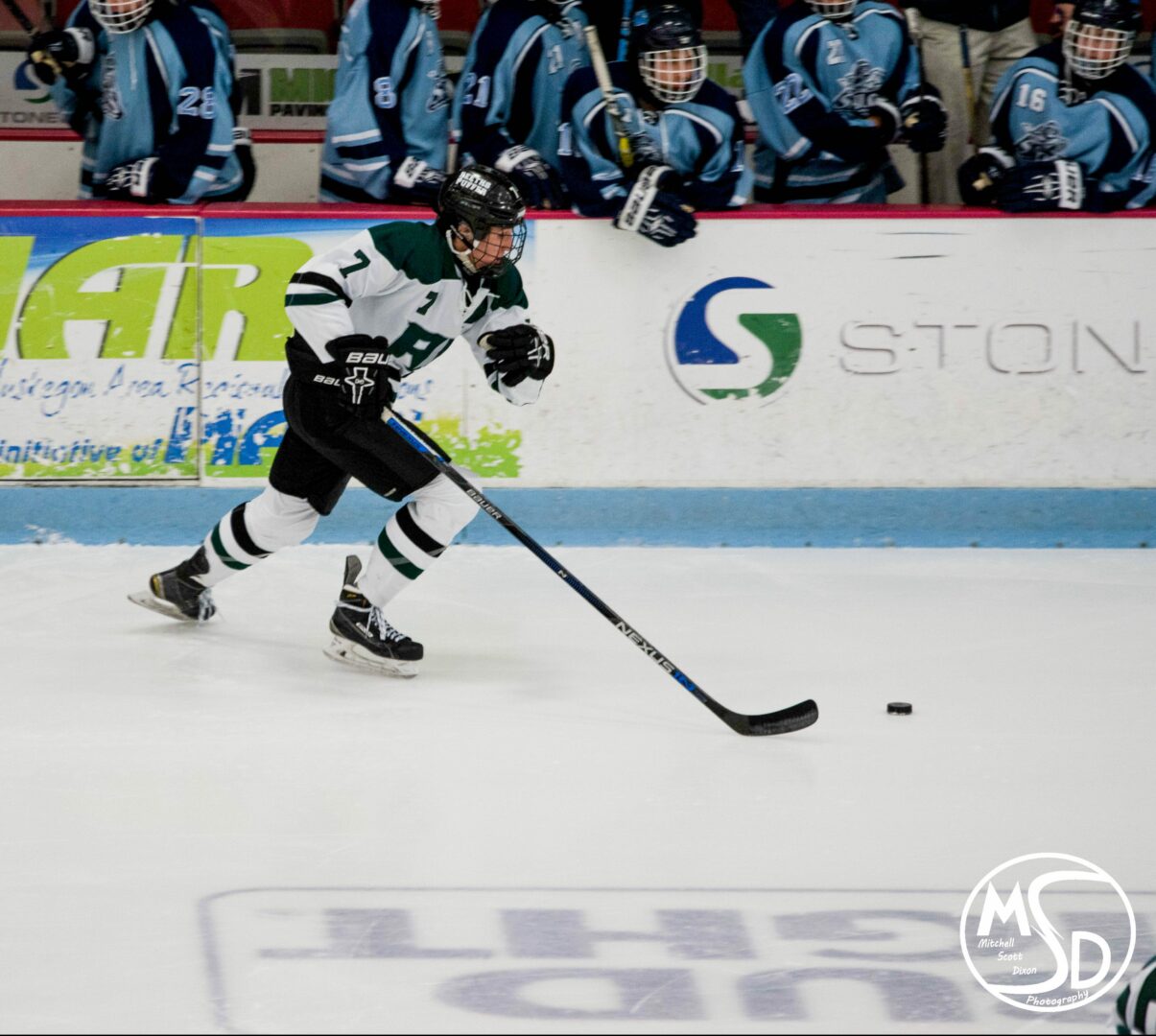 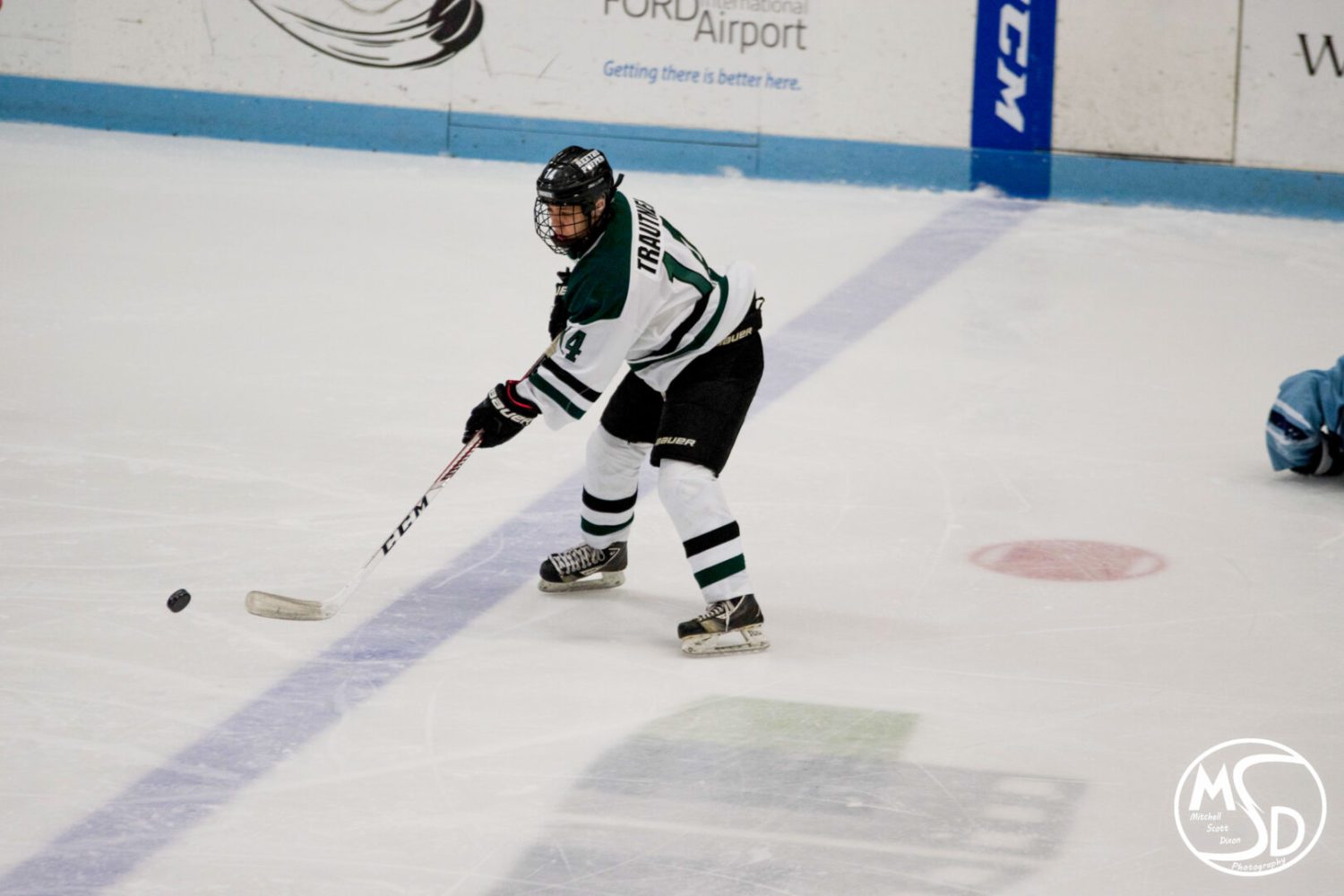 Riley Trautner tries to the keep the puck inside the blue line for Reeths-Puffer. Photo/Mitchell Dixon MSD Photography 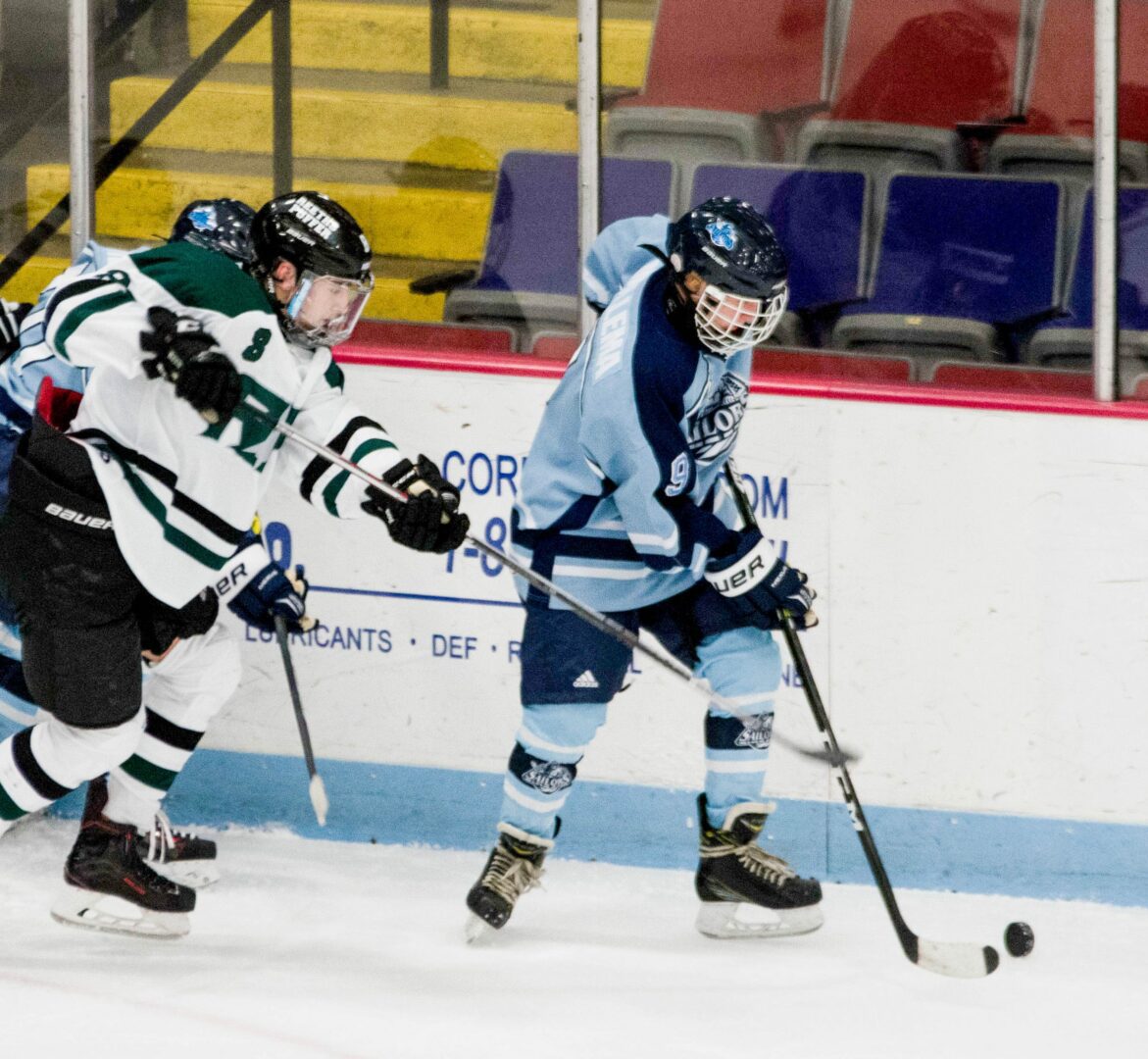 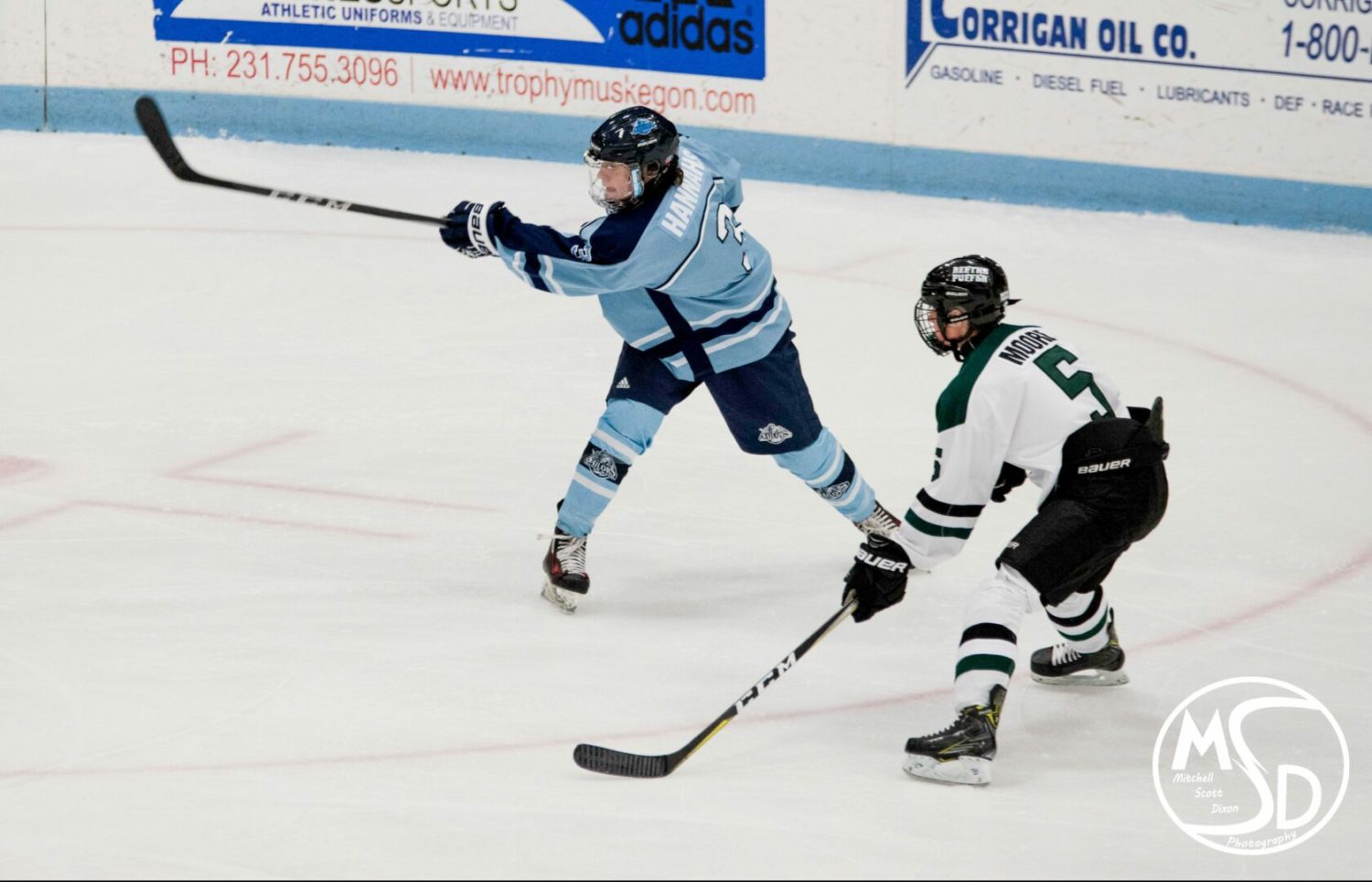 Erick Hannahs follows through on the slap shot with Reeths-Puffer’s Mitchell Moore at his back. Photo/Mitchell Dixon MSD Photography