MUSKEGON – The Muskegon Big Reds put in a lot of work on both ends of the floor in a dominating 69-37 win over O-K Black Conference rival Reeths-Puffer on Friday.

But if you ask Muskegon head coach Keith Guy, their work is far from finished.

“I can go down the list,” Guy said with a grin. “If you’ve got all night I can tell you everything we need to improve on. I like the direction we’re heading, but we’ve still got a ways to go.

“We have to play consistently great for 32 minutes. We have stretches where we play pretty good, then we have a lull.” 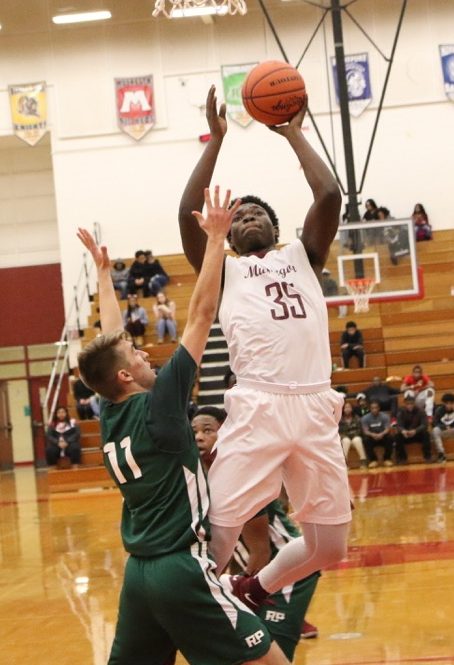 Muskegon’s Billie Roberts goes up for the shot in the paint over Reeths-Puffer’s Jake Lofgren. Photo/Joe Lane

Muskegon had a few lulls against the Rockets Friday, but they were often sandwiched between big spurts of offense.

The Big Reds led just 7-4 after four minutes, but then ripped off 21 consecutive points to pull away.

“I thought we played well during that stretch,” Guy said. “We have to get after people (defensively). The offense is starting to come together as well.”

Leading a balanced scoring attack for Muskegon was Eonte Tornes with 15 points, including three triples.

“My mindset coming in was not even to score, just make my teammates better,” the junior guard said. “When I saw the first one go in I thought, ‘I’m gonna shoot it the same way every time’.”

Tornes said the Big Reds having multiple options on offense, which is a huge advantage.

“Teams don’t really know who’s going to get off this night,” he said. “One night it could be Willie (Shanks), or Edriese (Jenkins) or Vern (Nash), or me tonight. It’s really good for us.”

“We tried to get (Roberts) established early,” Guy said. “A lot of times the guards come down and shoot the ball a lot. He’s working his butt off, and a lot of time doesn’t get the ball, so we talked to the guards about getting him some touches.”

The Rockets struggled with foul trouble throughout the game, and had two starters foul out early in the fourth quarter.

Gary Humphrey III and Josh Jordan led R-P with seven points each. Carter Fulton and Emcee Williams each had five. 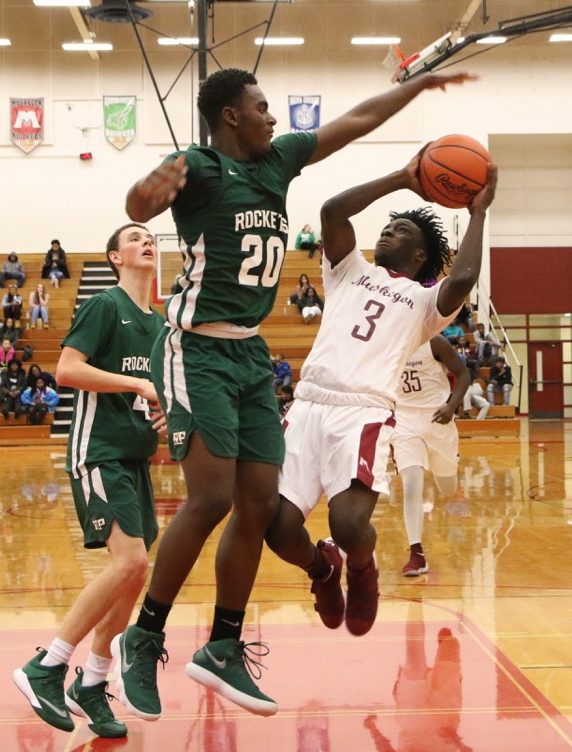 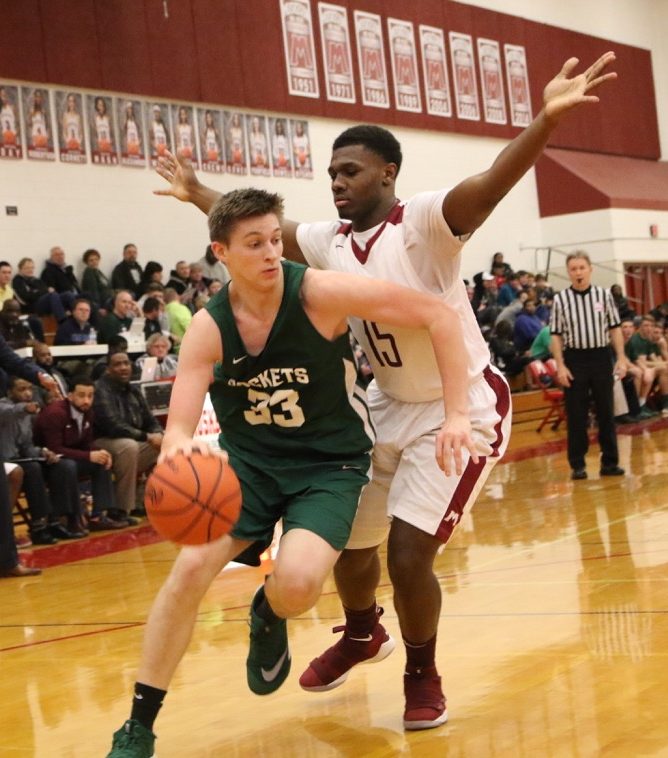 Muskegon’s Billie Roberts goes up for the shot in the paint over Reeths-Puffer’s Jake Lofgren. Photo/Joe Lane 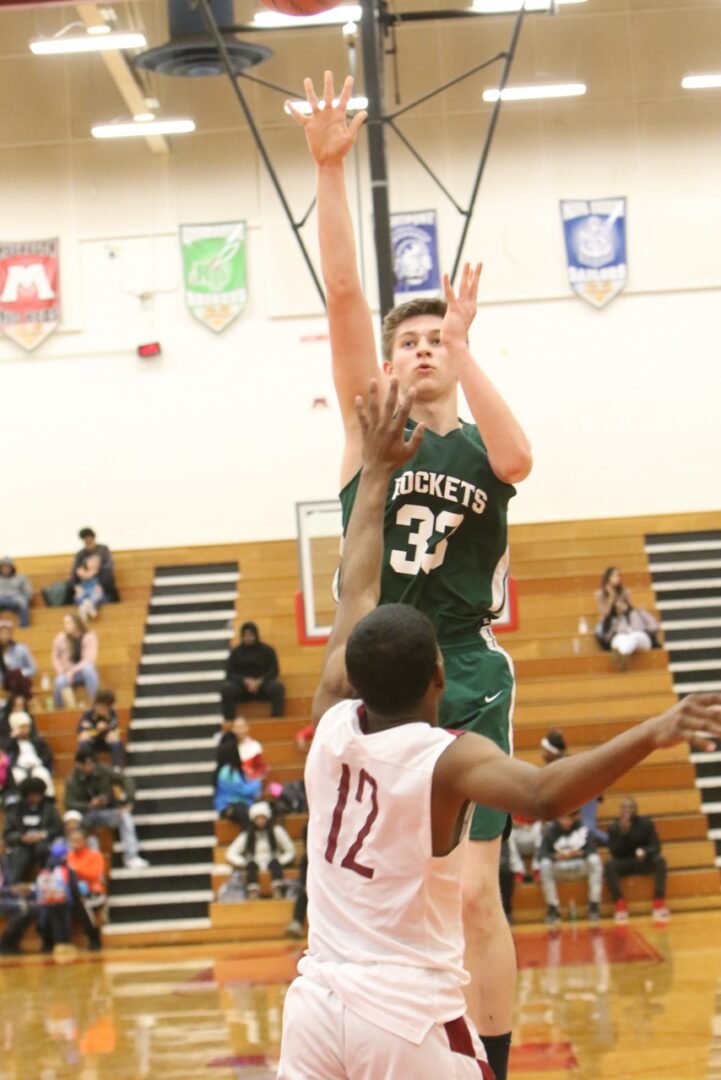 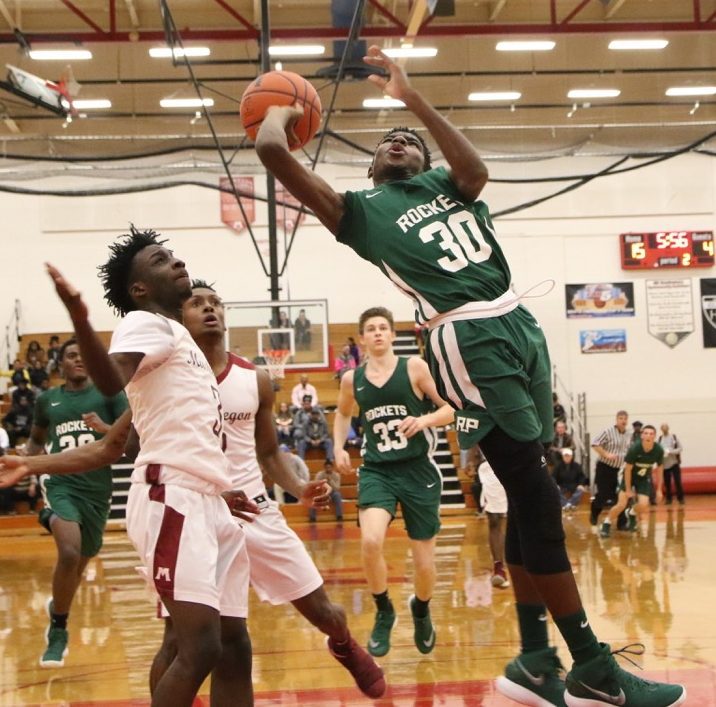