Van Bergen was a tremendously athletic tight end and defensive lineman for Whitehall on the gridiron, then dominated the paint during the winter months on the hardwood.

The 6-foot-6, 288-pound Van Bergen went on to become a key member on the defensive line for the University of Michigan, racking up 13.5 sacks and 134 tackles during his playing career in Ann Arbor.

A decade later, the 6-7, 230-pound Rake has followed suit. He was the Vikings’ left tackle this fall, and helped lead the team to a 6-4 record and a Division 4 playoff berth.

And Rake has really been opening eyes for Whitehall’s basketball team, which has roared out of the gates with a 7-1 record so far this season. Whitehall coach Nate Aardema said Rake has been a catalyst to the Vikings’ success, averaging 17.4 points, a shade under 10 rebounds, and two blocks per game. 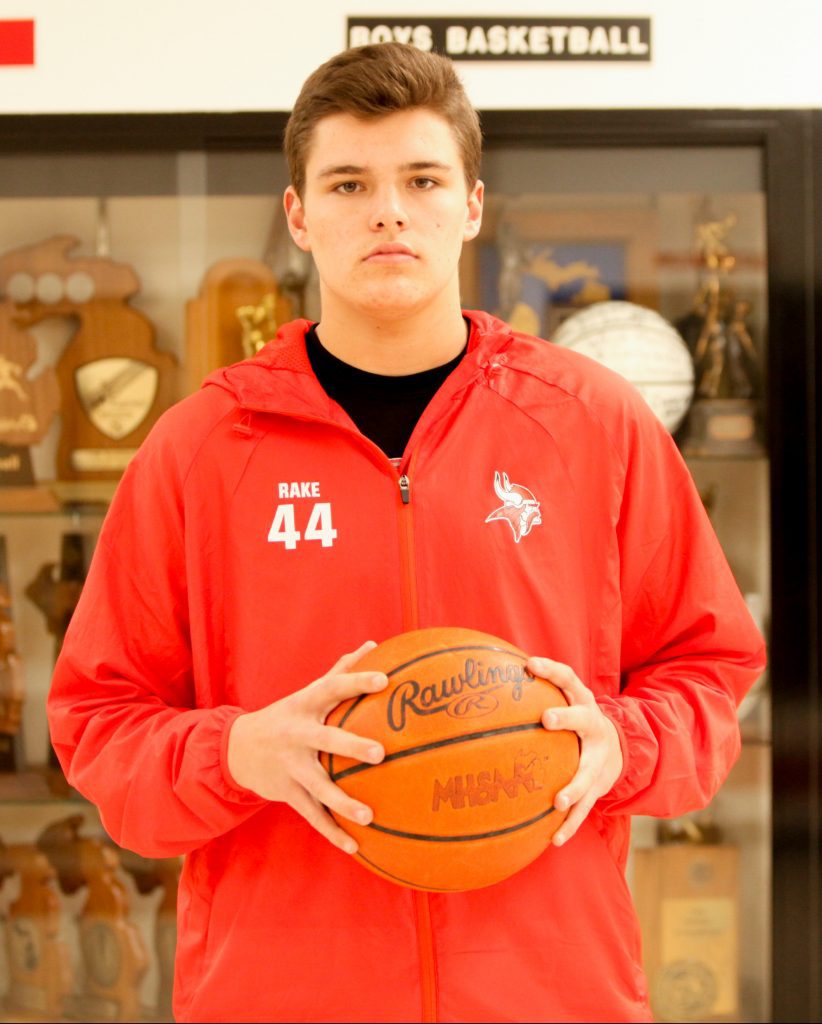 Aardema said double-double production every night from Rake is “certainly the expectation.” That’s even true this season, when opponents are more aware of his presence, and try in vain to hold him in check.

“Last year as a junior he was an all-league guy, but there weren’t a lot of high expectations for him,” the coach said. “This year, more people are aware of what he’s capable of doing, and his production is really eye-opening.”

Rake said he entered the season knowing he had to fill up the stat sheet for the Vikings. That’s because Whitehall lost two of their main scorers from last year’s team, which finished 19-3 and won the West Michigan Conference championship.

He has been producing points in more ways than one. While Rake certainly dominates in the low post, he can step out and hit from the outside, too.

“It’s my goal to try to contribute a double-double every game,” Rake said. “Mostly I try to pound it down low, but I’m comfortable popping out for a mid-range jumper, or if my defender leaves me, I’ll shoot the three. It depends on what comes with the offense, but mostly I’m working down low.”

Aardema said Rake’s athleticism stands out, even though it took some time for him to get into basketball shape after the football season.

“I remember Ryan Van Bergen was the same way,” Aardema said. “He’d be about 30 pounds heavier for football and then run it off in basketball. 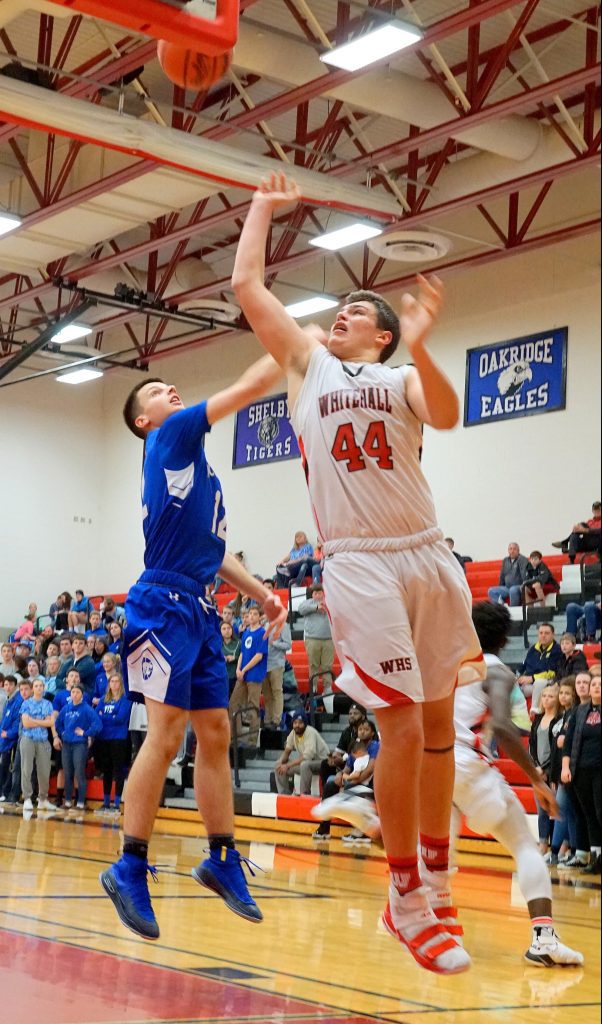 Rake lofts in a soft shot from the baseline over Montague’s Peyton Burton. Photo/Leo Valdez

“Brandon moves well for a player his size,” he added. “He definitely carries his weight well. We’ll play him out on the perimeter on ball screens and he’ll switch on guards (defensively). He does a good job at it.”

Aardema said he challenged Rake and the rest of his squad to be more physical in the paint, after a loss to current West Michigan Conference frontrunner North Muskegon on Jan. 5.

The Vikings responded with an impressive 55-28 victory over rival Montague, and dominated the boards in the process.

They’ll need to maintain that mindset if they want to catch the Norsemen in the league race, or dethrone Spring Lake in the Class B district tournament. The Vikings lost to the Lakers in the district finals last season.

“We want to pride ourselves with defense and rebounding,” Rake said. “Against really good teams down the road, we know we need to rebound better. Our offense will come through our defense.”

Rake said he drew his passion for basketball from watching his older brother, 2015 graduate Connor Rake, play for Whitehall. He said he was also encouraged to develop his low-post game by his JV coach, Shannon “Buddy” Popps.

Rake said he wouldn’t mind playing basketball at the college level, but it depends on what kind of offers he receives – and in which sport.

“If I stick with football and play offensive tackle (in college), I know I’ll have to put on some weight wherever I go,” Rake said. “We’ll see what happens.”

Aardema can envision Rake sticking with hoops and thriving at the Division 2 or 3 level.

“There are some college coaches who are interested, with his frame and long arms,” Aardema said. “He’s got the ability. He’s a 6-7 kid who can stretch the floor a little bit, and teams are looking for players like that.” 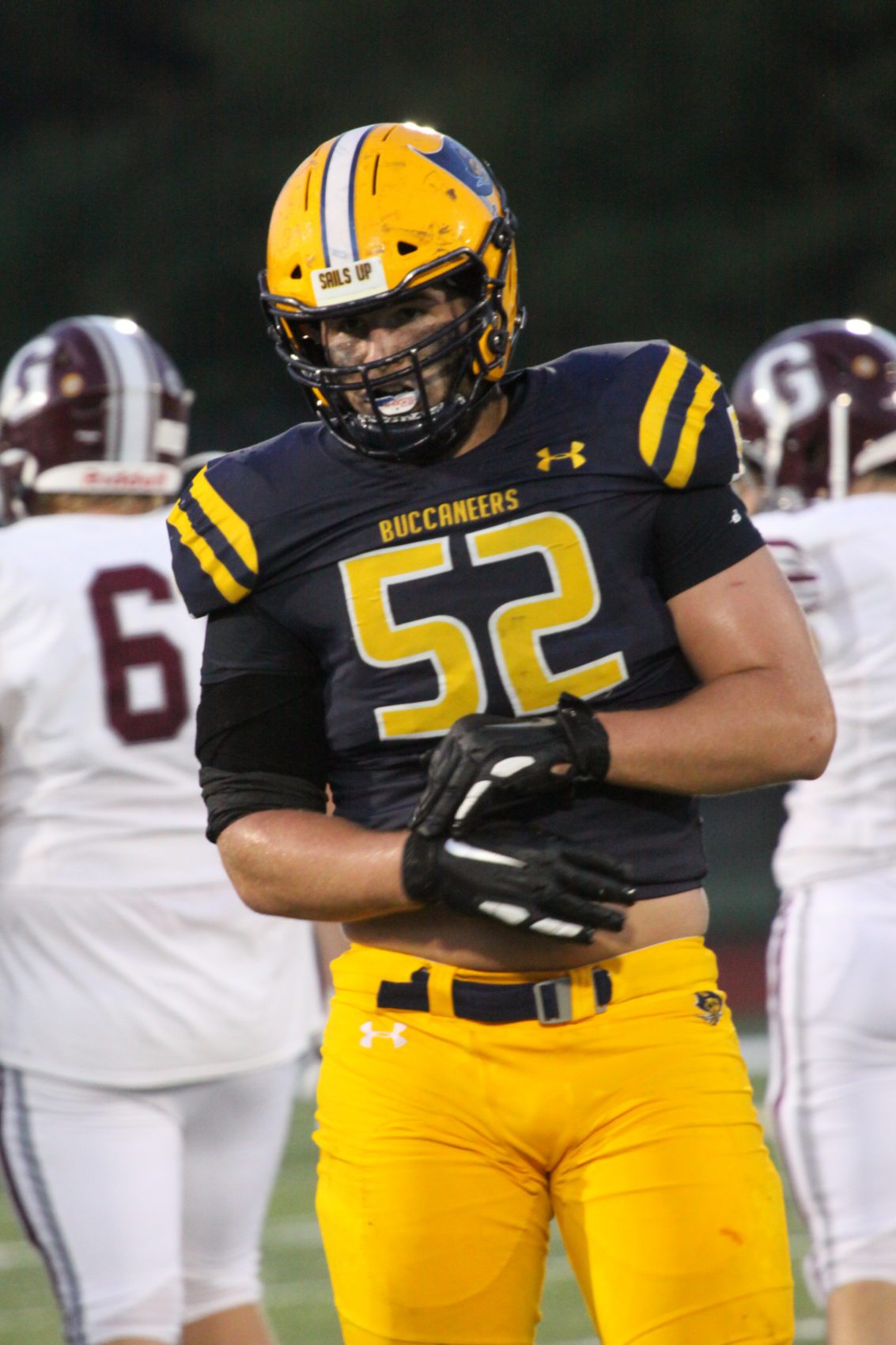