KENT CITY – Perhaps the best way to accomplish perfection is to avoid focusing on perfection, and mix in a little fun.

That strategy worked wonders for the Kent City boys basketball team this season.

Going into the campaign, Coach David Ingles figured his Eagles would be pretty good. They returned four starters from a team that won 14 games last season.

But by the time the regular season was over, the team had exceeded all expectations by posting the first perfect 20-0 record in school history. 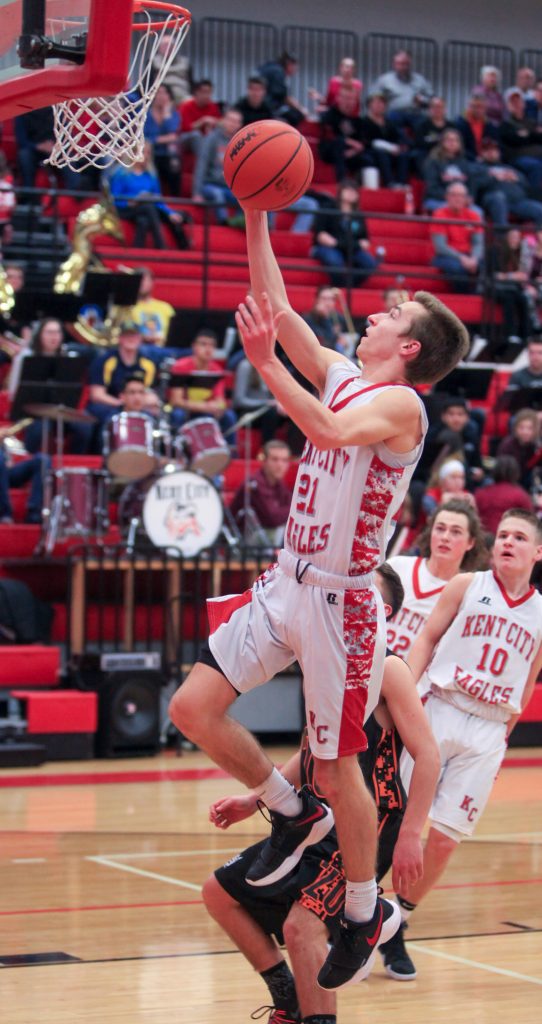 “There was a lot of excitement,” Ingles said. “Our athletic director brought out a ladder and scissors and let us cut the nets down. Everybody came down on the floor. Nobody wanted to leave.”

“It was really fun,” said Kent City senior guard Fraser Wilson. “It made it even better that it was senior night. That added an extra element. It was something we won’t be forgetting for awhile.”

The Eagles opened the season with a 50-49 overtime victory over Coopersville, then just kept on winning.

There were some very close calls along the way, including a last-second 47-45 overtime victory over Morley-Stanwood in February to clinch the CSAA Silver Division championship.

But at the end of every contest, the Eagles added another W to their record.

The team won every game with an unusually balanced attack. Wilson and sophomore Eli Carlson were the leading scorers with an average of 13.6 points per game. Junior Brenden Geers averaged 6.9 points and 7.1 rebounds. Senior Gavin Mead averaged 6.1 points and 2.9 assists.

But even as the wins kept coming, Ingalls was still surprised to see the dream of perfection become reality.

“Honestly, no,” Ingles said, when asked if he had any thoughts of his team going 20-0. “It’s so hard to do. You have to be so good for four months straight.

“Going in, I thought 16 or 17 wins would be a pretty good year. We had nine games against Class A and B schools. Ravenna was our only Class C non-conference opponent.”

The players bridged the gap between good season and great season. They got together on their own a lot during the offseason and worked hard to prepare.

“We definitely put in the work,” Wilson said. “The seniors kind of took control and tried to get people into the gym as much as possible.

“I think we knew we had a good chance to win the conference, which was our original goal. But when we won some games, our confidence grew and we realized what we could do.”

But as victories piled up, and the Eagles started working their way up the state rankings, it became more difficult for the players to forget that they had yet to lose a game.

The pressure of maintaining the perfect record began to take a toll by midseason, Ingalls said. 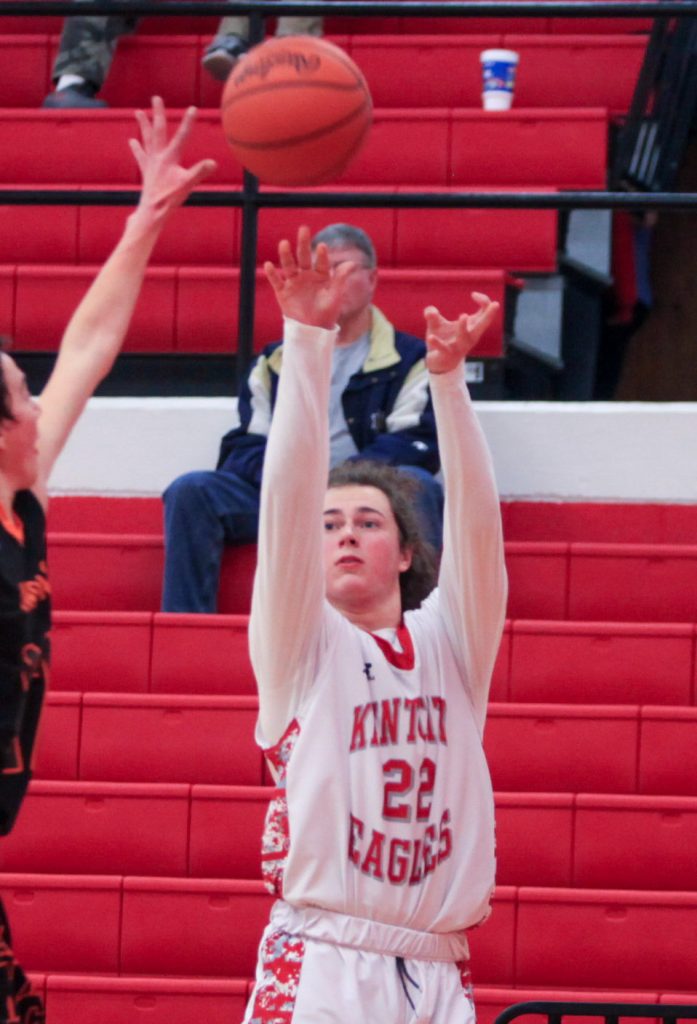 Gavin Mead takes a shot from the corner during the Eagles’ game against White Cloud on Feb. 2. Photo/Jason Goorman

“We started playing a little tight,” he said. “We weren’t moving the ball as well, and we were missing shots.”

Ingalls said he sought some advice about keeping things loose and fun for the players from some guys who know what it’s like to win a lot.

“Jim reminded me that we’re just playing a game, and no game is bigger than the last one,” Ingles said.  “Zoulek gave me some ideas about some fun things we could do during practice and off the court.”

The Kent City coaches cancelled a practice after the conference-clinching victory over Morley-Stanwood, and instead arranged a team bowling party.

“It worked out great,” Ingles said. “It gave the kids a chance to relax and get refocused.

“We reminded them that we are not brain surgeons, we were just playing a game. We talked about just having fun, and since then it’s been fantastic.”

Now the perfect regular season is in the books, and nobody can ever take that accomplishment away from the Eagles.

But their season is hardly over. Kent City will begin Class C district play on Wednesday with a semifinal game against Western Michigan Christian at Ravenna High School at 7 p.m.

If they win, they will have a likely date with powerful West Michigan Conference champion North Muskegon in Friday’s finals. 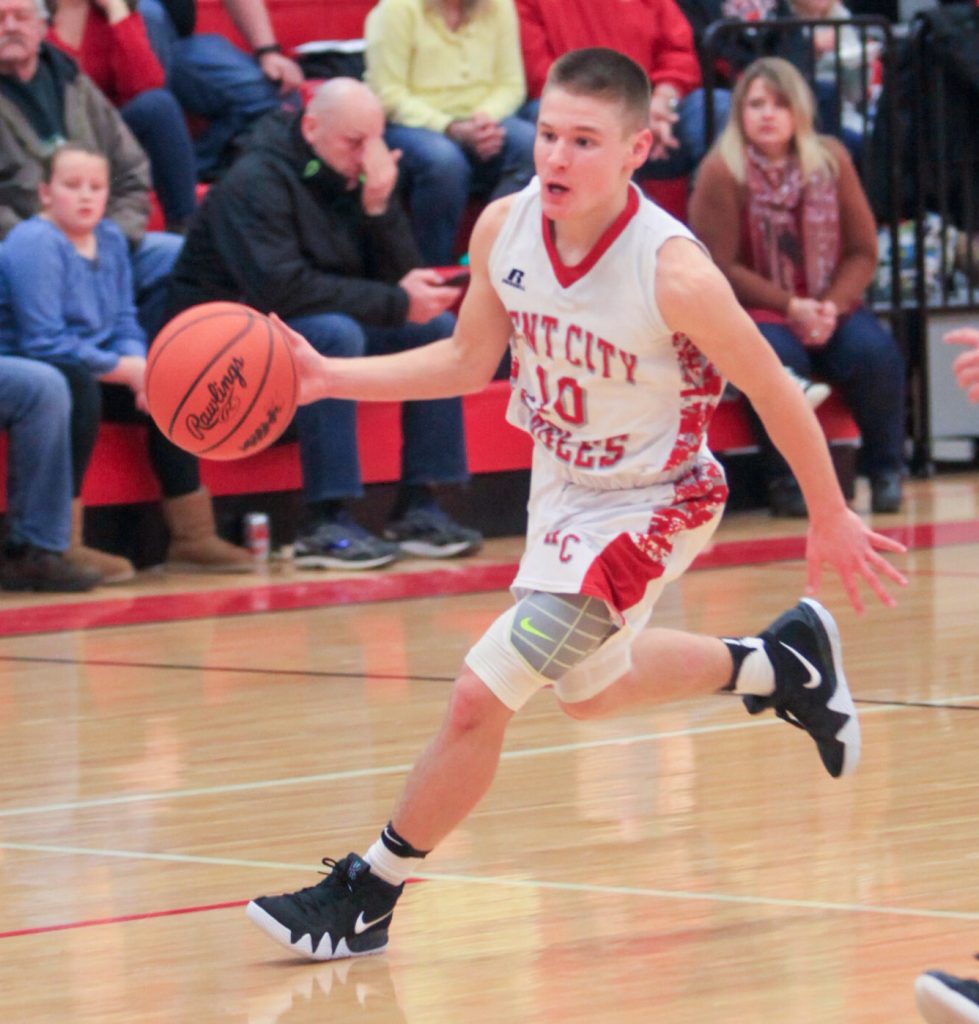 With a 20-0 record, some are already talking about the Eagles making a tournament run and ending up in the state Final Four at the Breslin Center at Michigan State University.

Ingles is wary of that kind of talk. Unlike the regular season, when a loss would not have been a disaster, a defeat at this point would end the season.

“We have to do it game by game and possession by possession,” he said. “Wednesday will be a big task. (WMC) is long and athletic and they can score. They’ve beaten North Muskegon, which is a very good team.

“But I do like how we’re peaking right now. I think we’ve gotten better in the last few weeks.”

While the coach is cautious about predicting a long tournament run, he can’t help but be a little excited about the possibilities,

He remembers how thrilling it was to coach the Muskegon Catholic boys team to the 2012 Class D state semifinals, where the Crusaders lost a heartbreaker.

“Going into the tournament we were 11-9, then we got healthy and started clicking on all cylinders,” said Ingles, who coached at Allegan, MCC and Reeths-Puffer before going to Kent City. “We lost to Southfield Christian 78-74 in the semifinals, and they went on to win the title by about 40 points.

“To go on that kind of a run here, I can’t even imagine what kind of reaction there would be.”