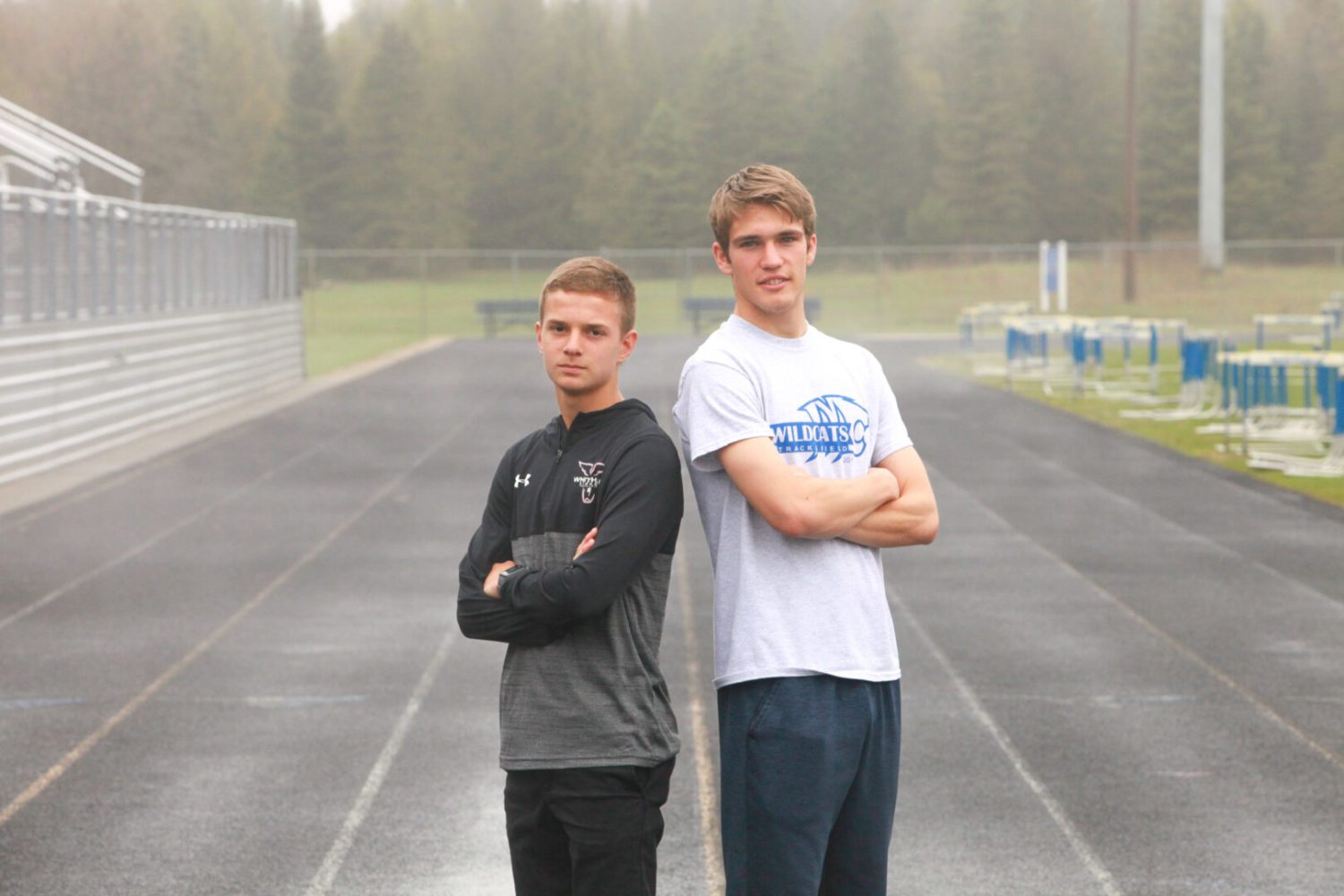 WHITE LAKE – Neighboring Montague High School and Whitehall High School have one of the most intense rivalries in Michigan, in every sport.

Only a mile and a bridge separate the two schools. Most of the student-athletes know each other, and they compete in the same conference for the same trophies.

But in track, the competition goes even deeper, because there’s a rivalry within the rivalry between two of the top distance runners in Muskegon County – Montague’s Cole Jensen and Whitehall’s Sam Baustert.

The two juniors have a lot in common when it comes to running. They both compete in the 3200-meter relay, the 1600-meter (one mile) run and the 3200 meter (two-mile) run. A lot of their most intense competition comes in the two-mile. 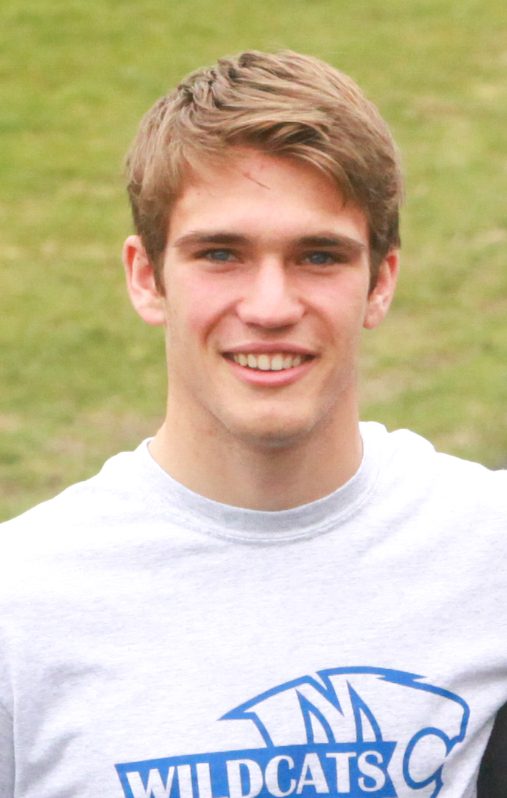 They both want to be the best, particularly in that event, in the West Michigan Conference and in the area. And they’re clearly in each other’s way.

Something will have to give on Friday, when they will meet again at the Greater Muskegon Athletic Association City Track Meet at Montague High School.

But Jensen and Baustert respect each other, and admit they are better runners because they have a next-door rival challenging them every step of the way.

“Iron sharpens iron,” Baustert said. “Near the end of our sophomore year, we were finishing at the top pretty often, and it was kind of almost planned that we were going to battle it out at the conference final.”

“I’m lucky to have Cole, he has made me unbelievably better over these past seasons. I owe a lot to him as a runner because I think that we need each other to continue getting better.”

Jensen, who made the Division 3 state finals last year in the two-mile, couldn’t agree more.

“Having Sam as a competitor has pushed me to improve in so many ways,” he said.  “We were constantly going back and forth last track season, into cross cuntry last fall and now into track this season.”

Their rivalry took form last spring, when both were sophomores. 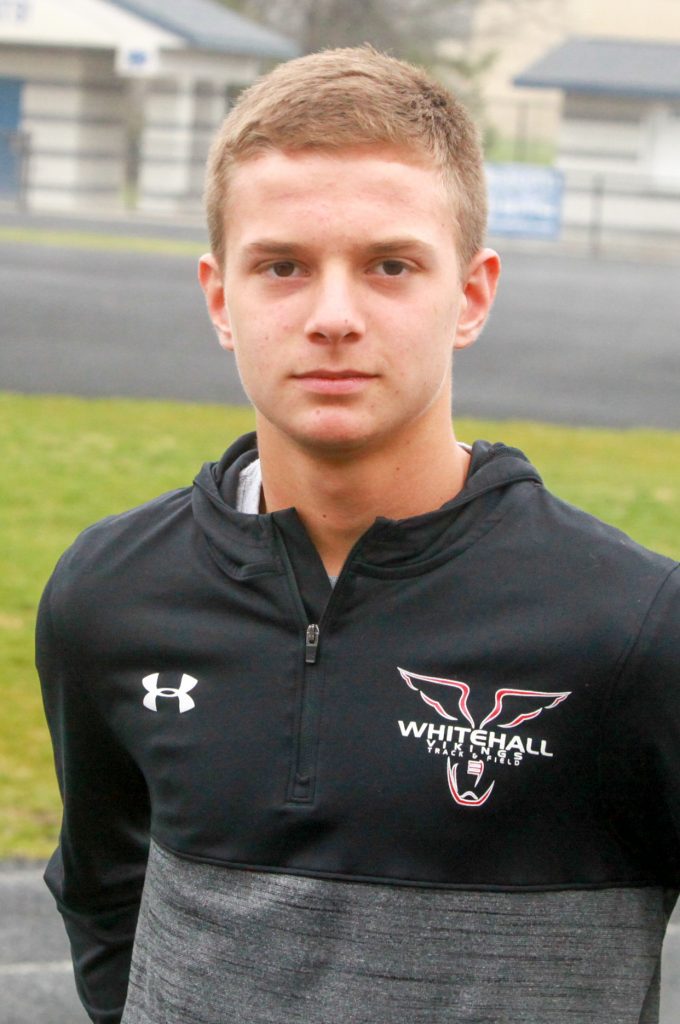 They went head-to-head five times in the two-mile in 2017. Jensen won three of five times, but four out of the races were very close.

Things were even tighter at last year’s GMAA city track meet, when they finished within a second of each other. Baustert finished second overall, behind Aaron Simot of Fruitport, with a time of 10:06.35. Jensen was third with a 10:06.93.

Thee rivalry picked up again last fall, when both were star runners for their respective cross country teams.

Jensen finished first in each of the four West Michigan Conference meets. Baustert took second in the first two of those races, finishing less than a second behind Jensen each time.

So far this spring they are neck and neck, again.

They only raced in the mile at the Mason County Optimists Invitational, and the tables were turned, with Jensen taking first place with a 4:41 and Baustert finishing second with a 4:42.39. 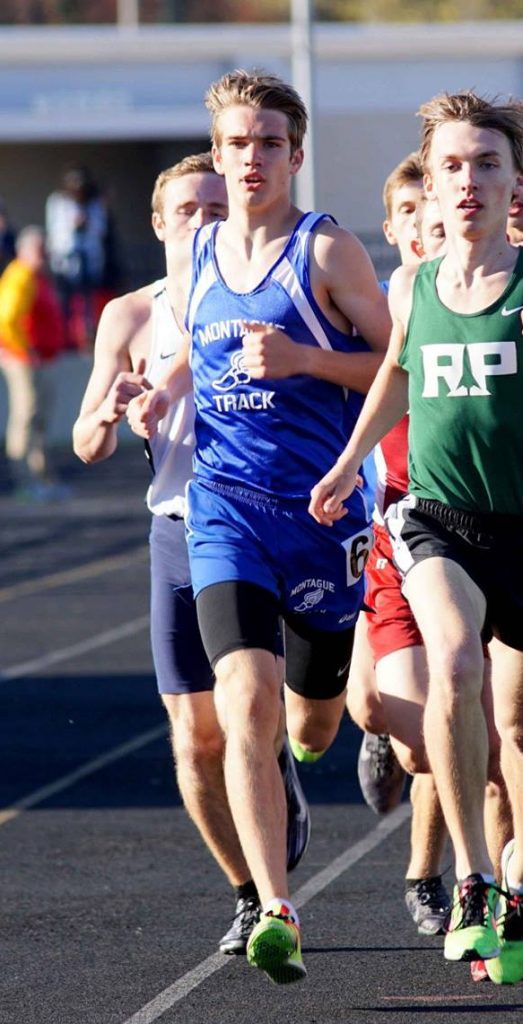 They met again in the mile run in a Whitehall-Montague dual meet earlier this week. Jensen won with a 4:56 while Baustert took second with a 4:59.

The bottom line is that one of them can’t glance around the track without seeing the other nearby.

“Near the end of sophomore year, we were finishing top of the conference pretty often and we had the close race at city and the Optimist Invite,” Baustert said. “That made it pretty apparent we would keep battling over the rest of the season and the next two years.”

Both admit there are times when having an equal rival is so many races is annoying. But Jensen said that’s the nature of the sport, and the intense competition should be something to enjoy.

“That’s how competition works, right?” he said.   “You have to be aware that a race will be all out in order to prepare for it. Once you’ve prepared, you need to make sure you’re going to go out there and have fun.”

While the competition between Baustert and Jensen is definitely spirited, there was one time, at last year’s city meet, when they actually worked together a bit, for their mutual benefit.

Jensen said his goal going into the meet was to break the 10-minute mark in the two-mile run for the first time in his career. So he talked to Baustert, who had yet to break that mark himself, and Aaron Simot of Fruitport, who was yet to break 10 minutes in the 2017 season.

Jensen said the three of them agreed to run a “controlled race” and it worked out well. Simot finished first, Baustert took second and Jensen was third. None of them broke the 10-minute mark that day, but the cooperation between the rival runners was memorable, Jensen said.

“The three of us changed leads several times and were helping each other like we were a team,” Jensen said. “We all pushed each other so hard and it was so much fun. That’s my favorite memory because we were working together and forgot about our jerseys. We were finally not competitors, but working together to reach a common goal.”

No matter what happens this season or next between Jensen and Baustert, everyone agrees that their rivalry is a good thing, in several different ways.

“The competition between those two is good for the schools, the rivalry, Cole, Sam, and the sport of track,” said Montague track coach Terry Fick. “Neither one of them wants to lose to the other, which personifies the competitiveness that the athletes of these schools have with each other.”