MUSKEGON TOWNSHIP – If you’re a fan of great pitching, Thursday’s baseball game between Mona Shores and Reeths-Puffer would not have been for you.

But if you prefer a lot of scoring and some high drama, you would have loved it.

The victory gave Mona Shores two wins in the three-game series this week with Reeths-Puffer. The teams split a doubleheader on Tuesday. They will meet again in the first round of the Greater Muskegon Athletic Association Tier 1 Baseball Tournament on Saturday.

“We’ve been swinging the bats extremely well lately,” said Mona Shores coach Brandon Bard, whose team improved to 11-5 overall and 5-1 in conference play.  “Coming off the doubleheader on Tuesday, we had a lot of guys ineligible to pitch. We’re a little surprised to win a game when we’re giving up nine runs. But we battled and continued to score.” 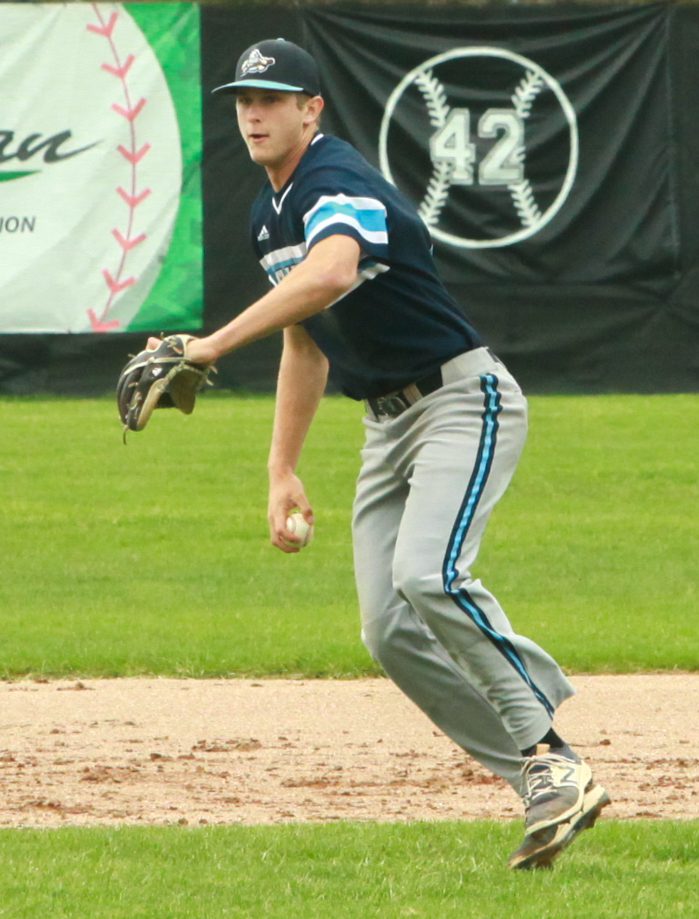 Caden Broersma makes the play on the grass from third base for the force out at home plate. Photo/Jason Goorman

The Sailors jumped out to a 4-0 lead in the top of the first inning. Reeths-Puffer closed the gap to 4-2 in the second before Mona Shores extended its lead to 6-2 in the third.

Then the Rockets picked up five runs in the bottom of the third to grab a 7-6 lead.

Mona Shores retook the lead with two in the fourth, but the Rockets were able to tie it. Then the Sailors got three in the fifth and two in the sixth to take the lead for good.

How’s that for drama?

Caden Broersma provided the majority of the offense for Mona Shores. The sophomore went 3-for-4 with a triple and six RBI.

“My coaches told me to just see the first pitch I like and go after it, and that’s what I did today,” Broersma said. “It all started with my teammates getting on base. I just had to do my part and drive them in.”

“He has tools that you can’t teach,” Bard said of Broersma. “He’s really starting to progress mentally and take better approaches at the plate. Just an outstanding day for a sophomore.”

A major problem for Reeths-Puffer pitchers was hitting batters. The Rockets beaned eight Sailors, six of whom came in to score.

“We just had a hard time on the mound,” said Reeths-Puffer Coach Brett Witczak, whose team fell to 5-9-1 overall and 4-5 in the O-K Black. “We hit a lot of batters and had some walks that killed us. We hit the ball well, we just have to work on some stuff with pitching.”

Mona Shores had some struggles on the mound as well, but a bright spot was Max Spagnolo. The sophomore pitched 2 2/3innings in relief and allowed just one run.

“Spagnolo’s coming along extremely well for us,” Bard said. “Every time he takes the ball, he’s gotten better and better.”

Jackson Neely had two hits and pitched the final inning for Mona Shores. Austin Flowers had a hit, an RBI, and three steals. Ryan Gillings drove in a pair of runs.

Cole Aerts and Ryan Aebig led Reeths-Puffer with three hits each. Spencer Fredricks had a pair of hits and two RBIs. Kobe Schalk and Will Benner each had a double. 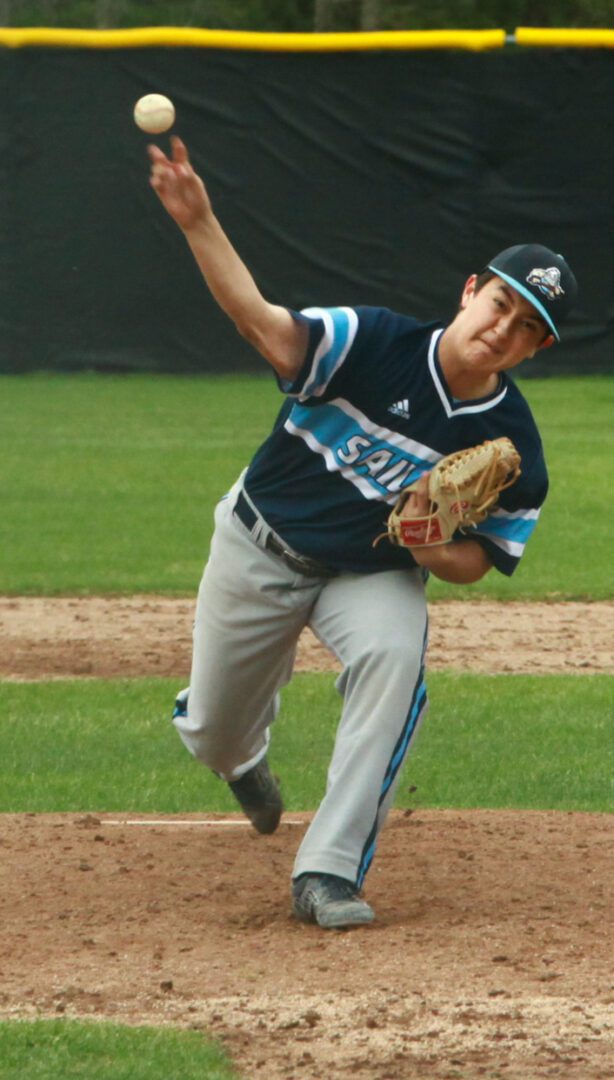 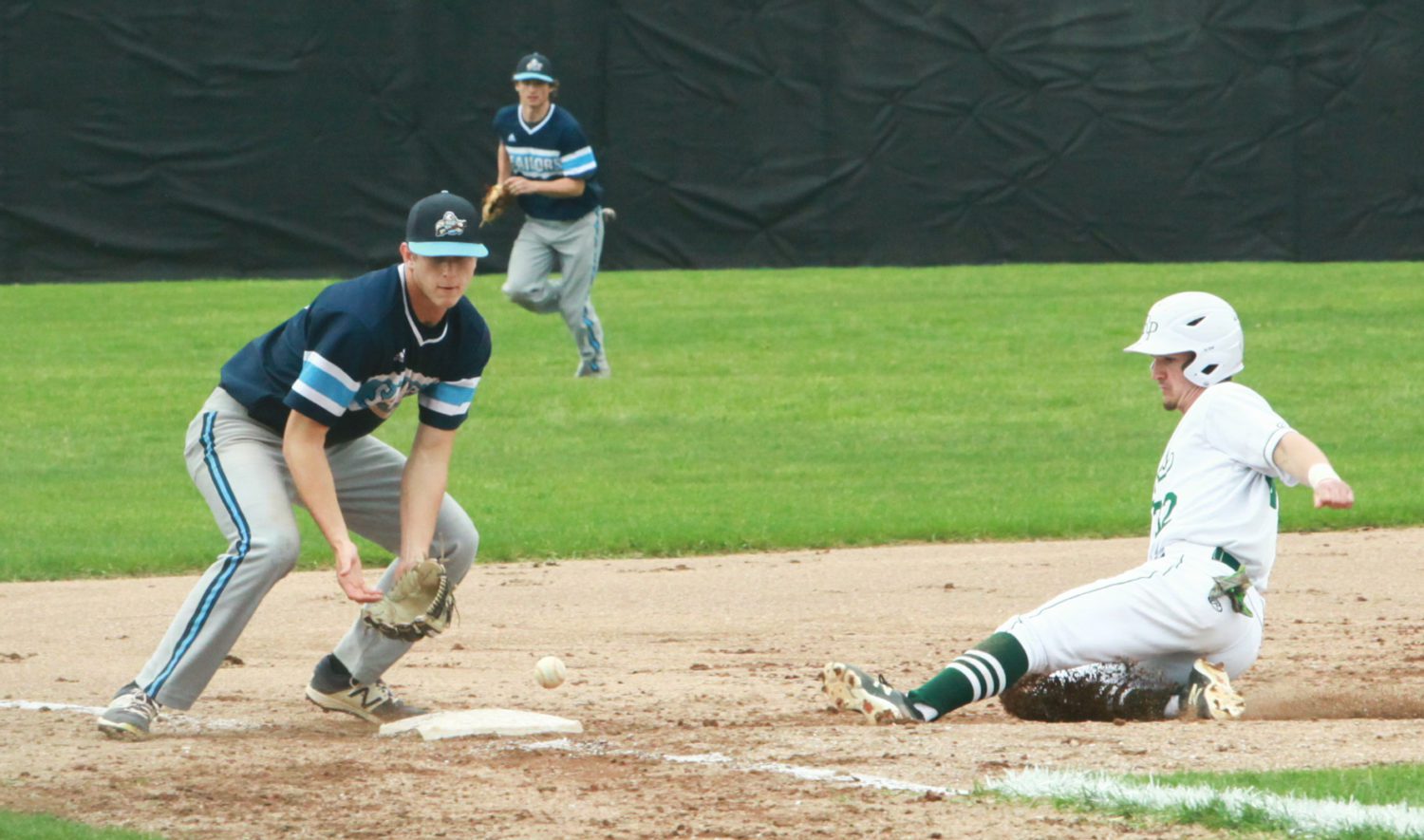 Caden Broersma gets ready to try to apply the tag to a safely sliding Cole Aerts for Reeths-Puffer. Photo/Jason Goorman 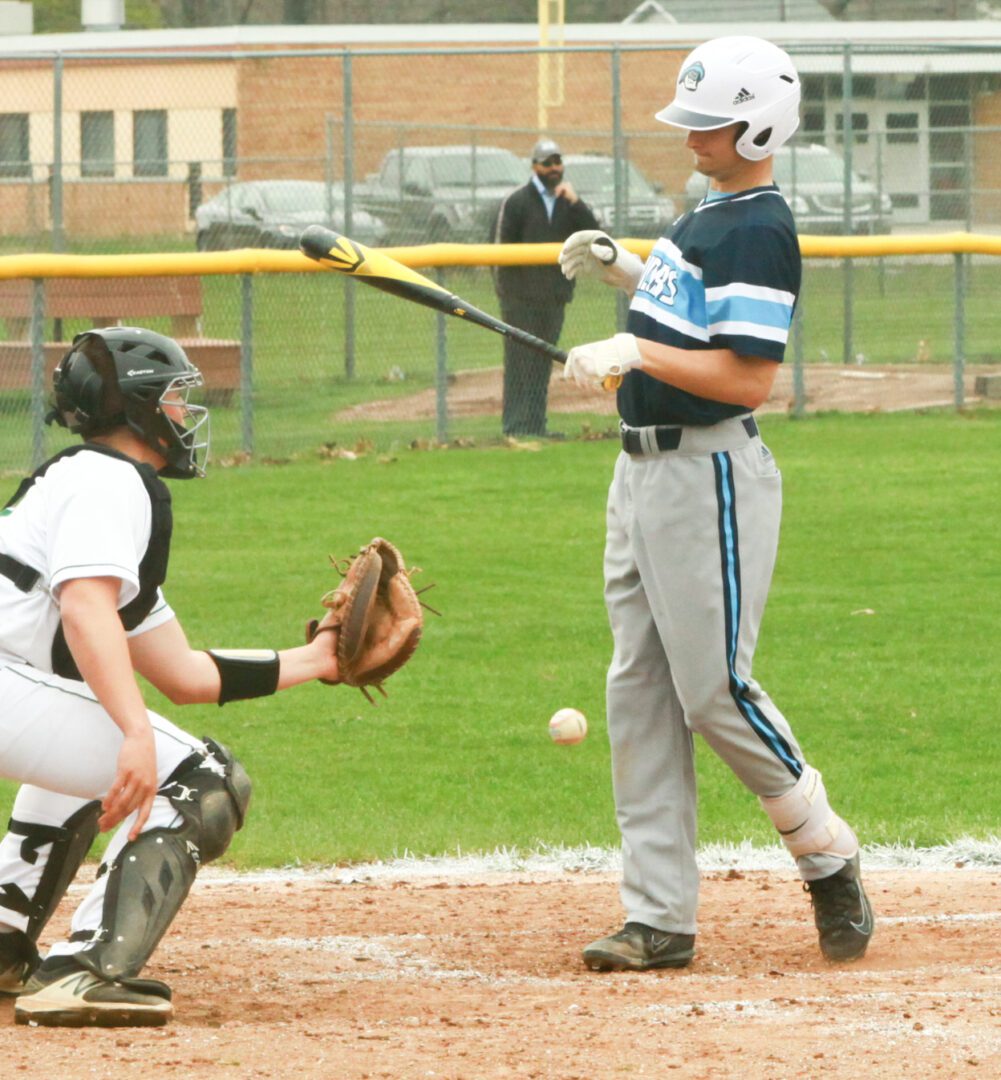 Kolbe Trovinger gets hits by the Reeths-Puffer pitch. Photo/Jason Goorman 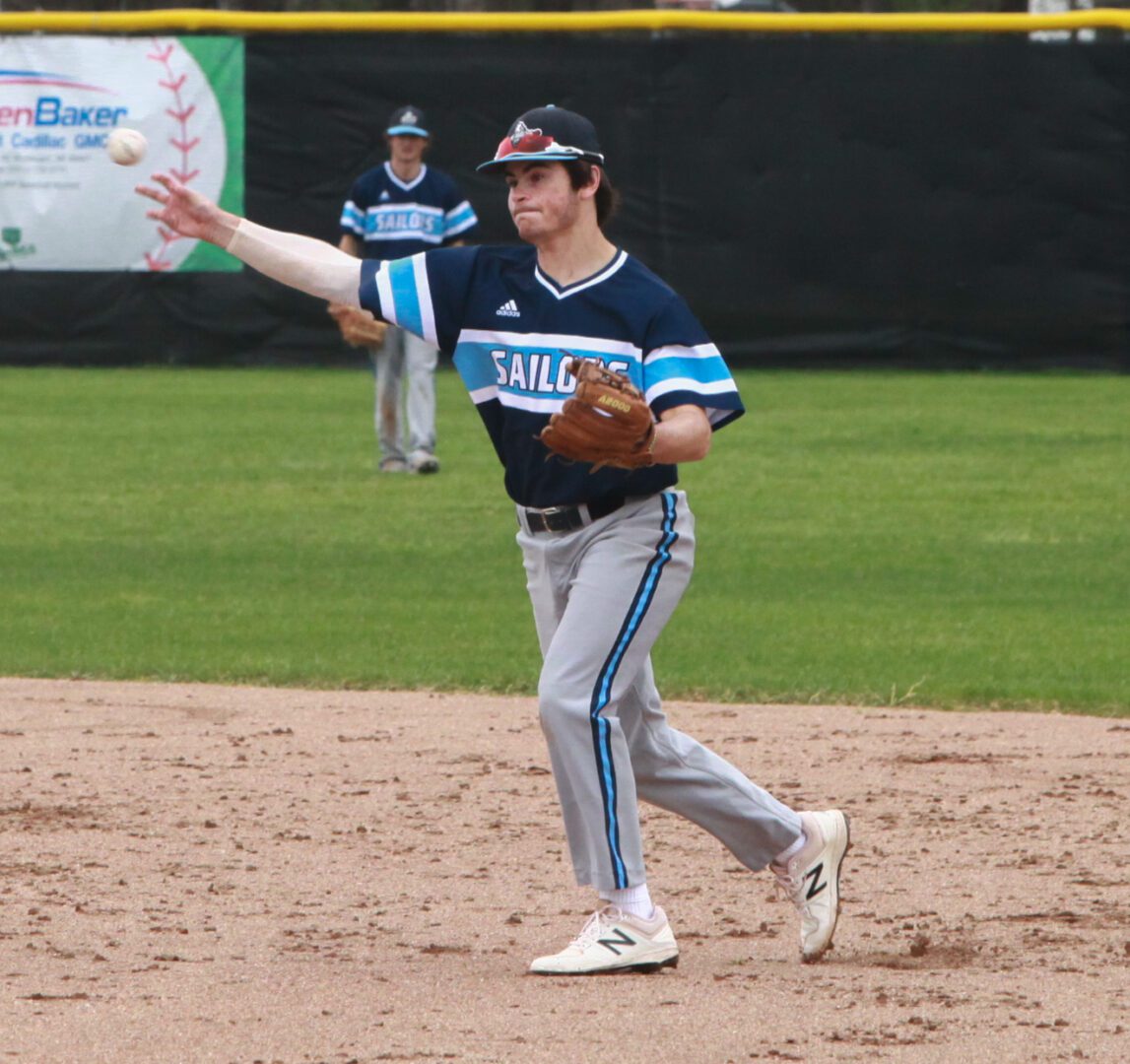 Austin Flowers makes the play at second base for Mona Shores. Photo/Jason Goorman 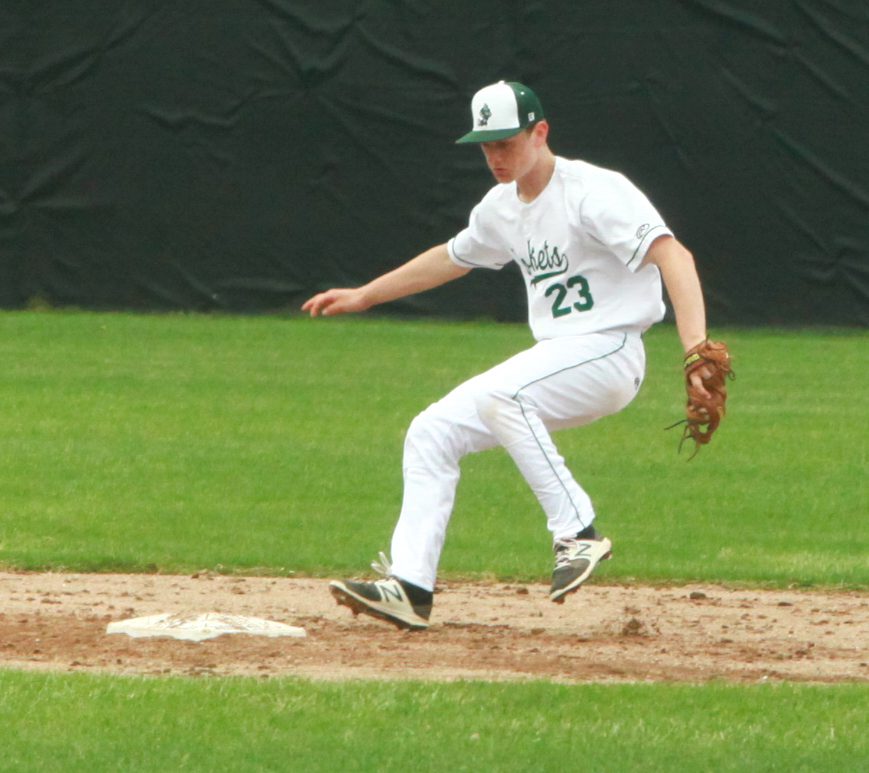 Carson Aerts makes the force out at second base for the Rockets. Photo/Jason Goorman