On Saturday, the Whitehall girls tennis team flexed its depth, won the tournament championship and snapped North Muskegon’s streak of five titles in a row.

But it wasn’t easy.

Whitehall finished with 47 points, Fruitport came in second with 43 and North Muskegon was third with 42.

Rounding out the scores were Mona Shores with 38 points, Reeths-Puffer with 27, Muskegon Catholic Central with 17 and Western Michigan Christian with 10. 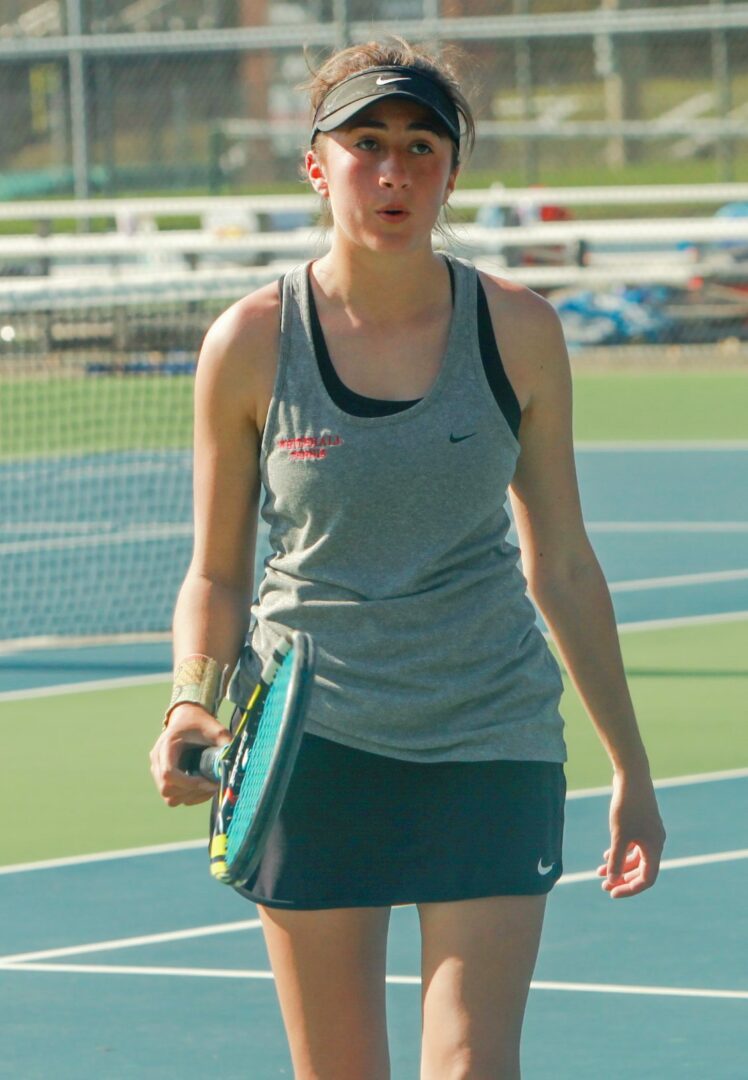 Whitehall’s Vanessa Heylmun takes a deep breath after winning a key game in the final set of her No. 1 singles match. Heylmun trailed 5-4 but battled for the win to keep her individual city title hopes alive. Photo/Jason Goorman

But the Vikings gained their edge and earned their trophy with second- and third-place finishes.

That’s how Whitehall’s team depth made the diffference.

“I’m just excited,” said Whitehall head coach Greg McManus. “I’m very proud and excited. All of the teams are neck and neck, and no team will blow away another.

“Our team is pretty deep. Today we finished first, second, or third in every flight. It shows that when you have a team, you don’t need one flight to carry a team.”

While the Vikings won as a team, one individual – Heylmun – provided the story of the day.

She won a city title in fourth singles as a freshman, before finishing runner-up two years in a row, in second singles as a sophomore and first singles last year.

But Heylmun won her second title in her final try, outdistancing Fruitport’s Trinity Busscher in three long sets in the first singles final.

Heylmun won the first set by a score of 6-3 and seemed to be on her way to an easy victory.

But Busscher fought back, grabbing a quick 3-0 lead in the second set, and cruising to a 6-2 victory.

Busscher won the first two games of the third and deciding set, and it appeared that Heylmun might have to settle for another runner-up medal.

Busscher had a 5-4 lead and was serving for the title in the tenth game,which went to deuce three different times. But Heylmun managed to survive and tie the set at 5-5.

Heylmun then took over, winning eight of the next 10 points, taking the third set 7-5 and winning an individual city title after more than two hours on the court.

“For me to come back was really big,” Heylmun said. “Winning the first set was really huge for me.”

Heylmun admitted that she doubted herself at times during the match, particularly while she was trailing in the third set.

“I was thinking that could be it,” she said. “But I kept going and believing in myself, knowing I’m part of something bigger on this team.”

McManus is hopeful that Heylmun and her teammates will take the momentum of their city title into regionals in two weeks.

“It’s a bonus,”  the coach said. “It’s a confidence booster. It feels good. We just want to keep getting better.” 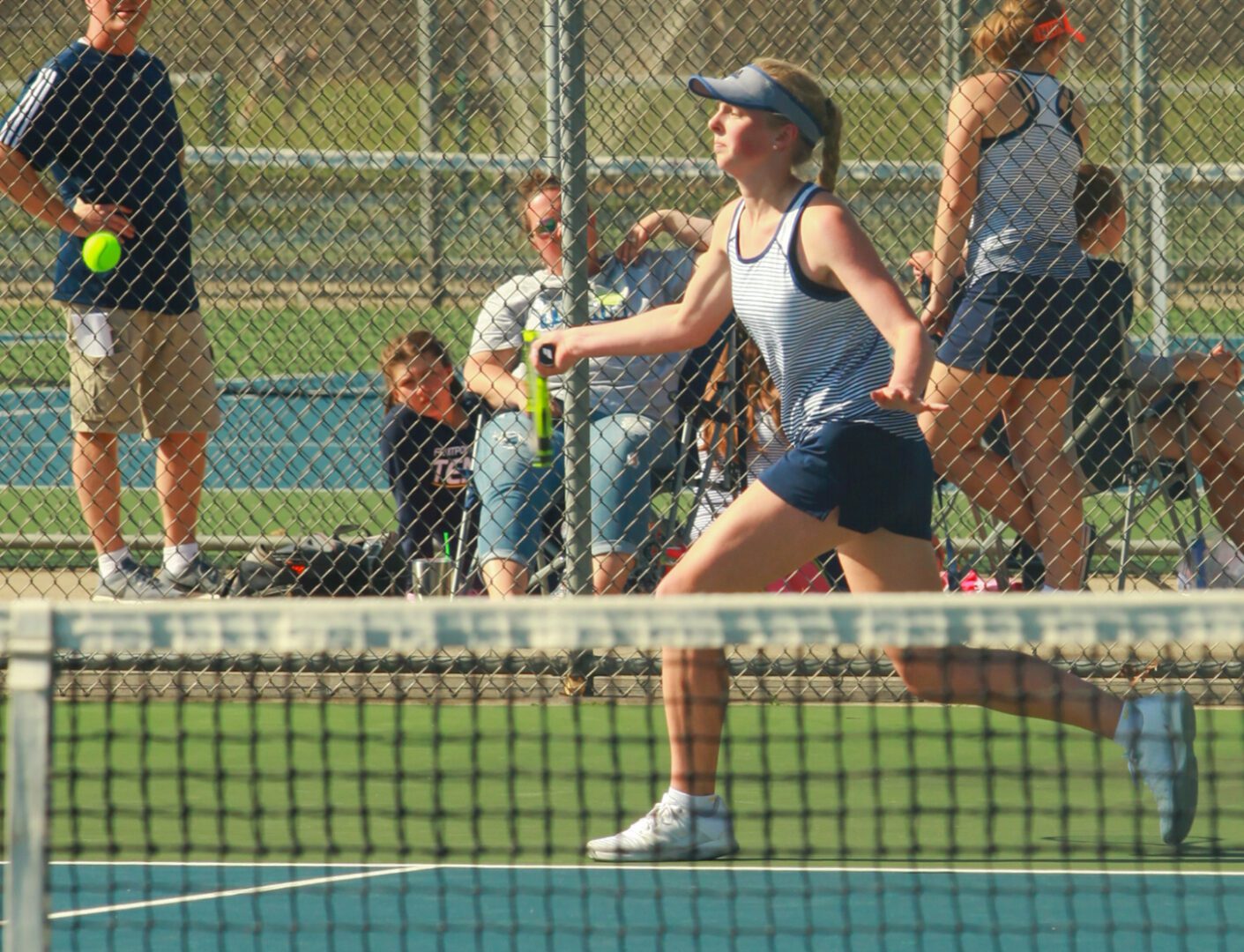 Fruitport’s Trinity Busscher pushes for the sideline to make the play on the ball. Photo/Jason Goorman 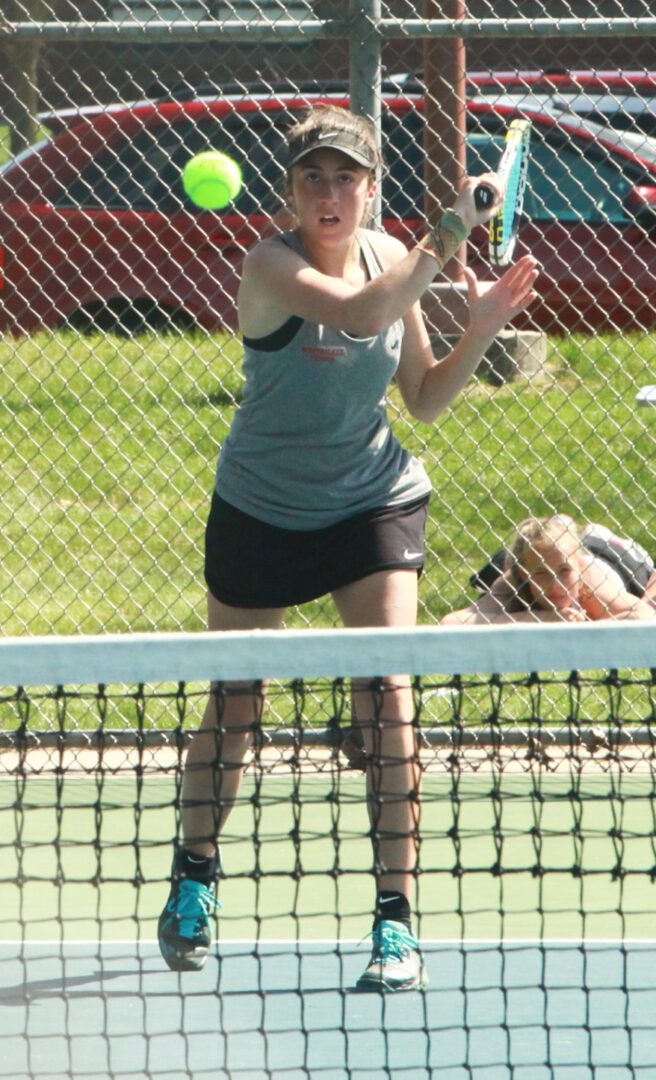 Whitehall’s Vanessa Heylmun follows through on the shot from the backline. Photo/Jason Goorman