NORTON SHORES – When it comes to great football player names, there’s none better than Sincere Dent.

It’s a fitting name for a player who, at 5-foot-11 and 220 pounds, prides himself with physical play at running

He’s more than sincere in his effort, and puts a serious dent in opponents.

That was clear last weekend in the Sailors’ Week 1 victory over East Kentwood at Grand Valley State University, when Dent piled up 221 yards and five touchdowns. He did that against a talented Falcons defensive line that features at least two future Division 1 college players.

Dent and the Sailors will try to go 2-0 on Thursday when they host Bay City Central in their home opener. 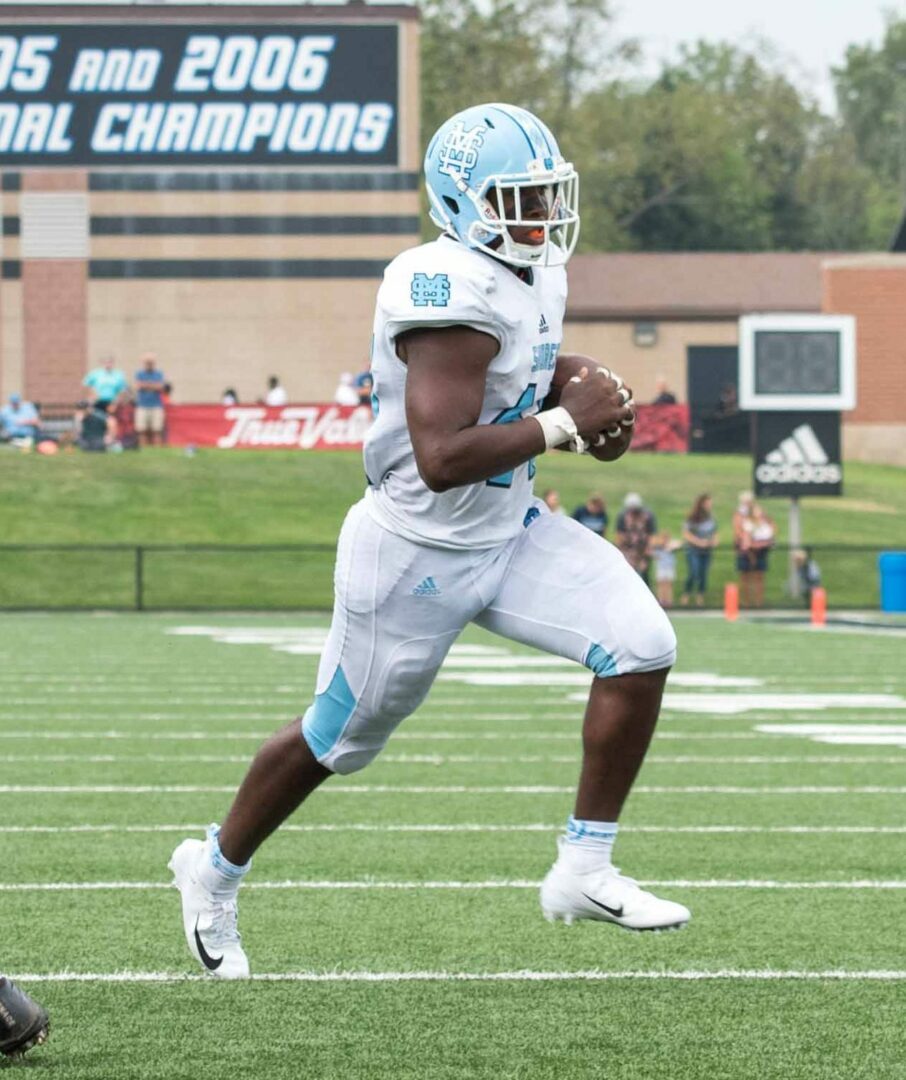 Mona Shores running back Sincere Dent gets ready to rush in for the score during the Sailors’ Week 1 win over East Kentwood. Photo/Eric Sturr

Dent said his parents, Tamella Williams and Antoine Dent, became enamored with the name Sincere after watching the 1998 movie “Belly,” whose main star (played by rapper/actor Nas) had the name.

Dent said he is asked about his name quite often, and occasionally gets some good-natured ribbing from his teammates.

“They’ll joke around with me when I’m done saying something, and say ‘Sincerely, Sincere,’” Dent said with a laugh.

Dent labels himself as a one-cut power back who enjoys plowing through the line of scrimmage for yardage, which is obvious to the helpless defenders who struggle to bring him down.

Mona Shores coach Matt Koziak said Dent added a new dimension to his game during the off-season, striving to increase his speed.

“Although he missed a few games with an injury he was still our leading rusher last season,” Koziak said. “He’s become a ton faster this summer. And he’s able to combine that with great vision, so we’re really excited at what he can accomplish this year. We’re going to lean on him a ton, especially with a new quarterback learning on the fly.”

Dent said he ran track in the spring for the first time, and also developed a number of skills at this summer’s Best of the Midwest football camp at Grand Valley State University, where he showcased his talents in front of a number of college coaches.

“It was really beneficial, just picking up bits and pieces from coaches like being aggressive, keeping my hips square (at linebacker) and don’t hesitate, just strike,” he said.

Despite his lofty production at running back, Dent said he’s been told by a few coaches that his future in college is at linebacker. He’s part of a tremendous linebacking unit at Mona Shores, joining seniors Jacob Wahlberg and Jackson Nealy.

Koziak called the Sailors’ defensive front six the best he’s coached during his eight-year tenure at the school.

While Dent’s future may be on defense, he will certainly get the most publicity with his game-breaking talents at running back. The Sailors’ offense put up 48 points against East Kentwood, and Dent had a lot to do with that.

“We’re pretty diverse on offense,” Dent said. “We’re unpredictable because we have so many options. And we’re able to flourish because of our (high-paced) tempo. We pride ourselves on tempo.” 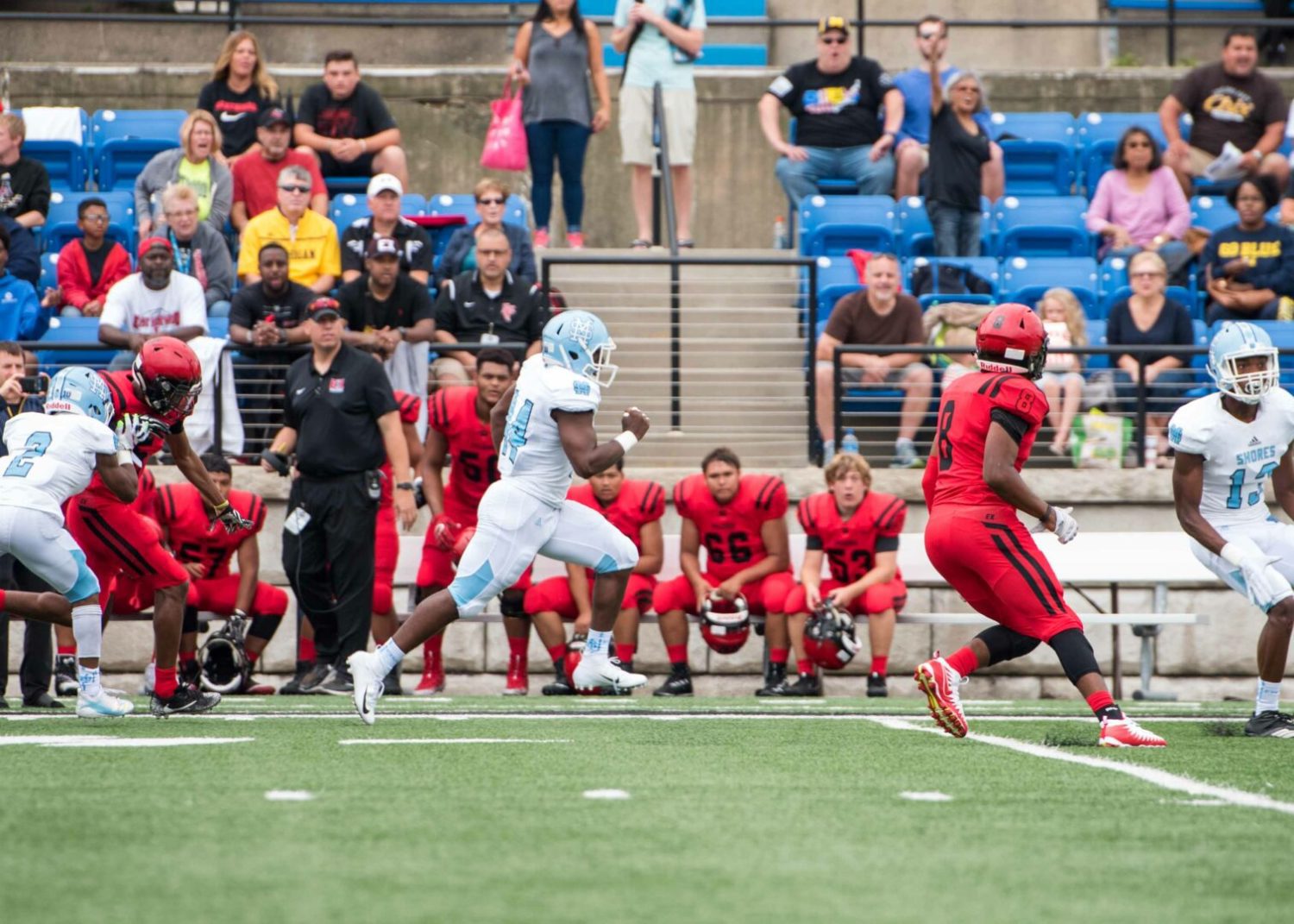 The East Kentwood bench watches on as Mona Shores’ Sincere Dent racks up yardage early in the first quarter of the Sailors’ Week 1 win. (photo/Eric Sturr) 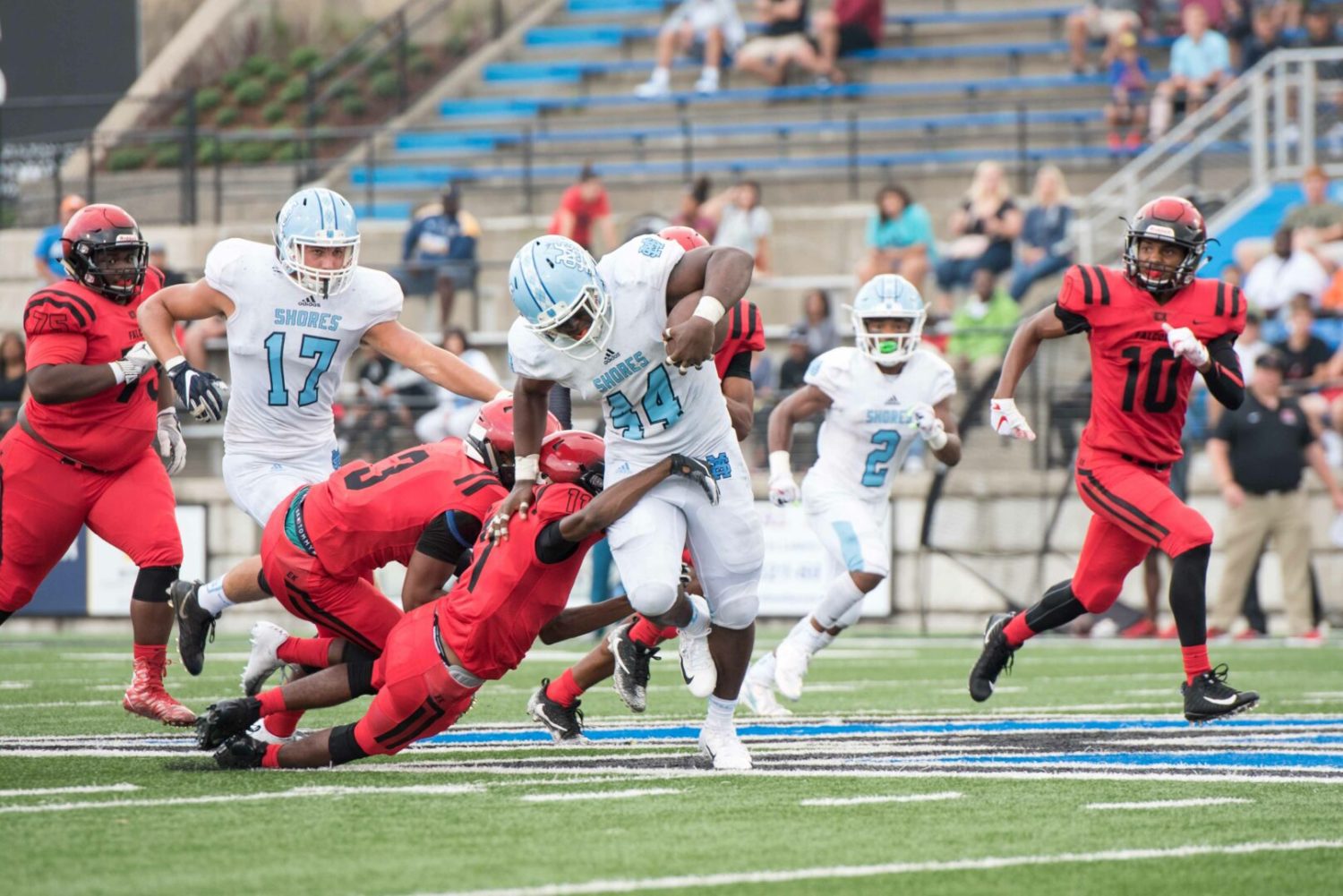 Sincere Dent breaks East Kentwood tackles as he carries the ball for another long gain up the middle. (photo/Eric Sturr) 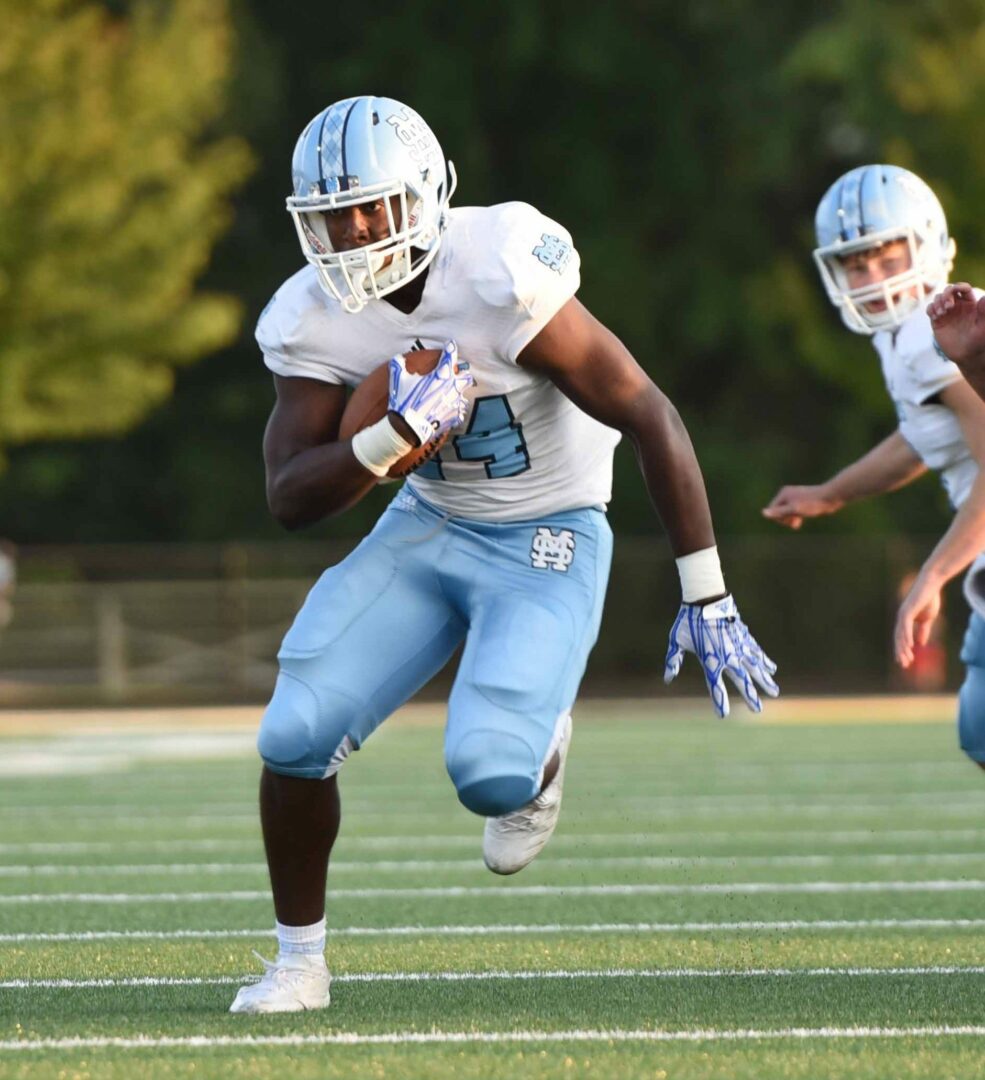 Mona Shores running back Sincere Dent on the attack in 2017.