EGELSTON TOWNSHIP – Early on it was looking like it would be a back-and-forth game, so the Oakridge football team just kept doing what it does best – run the football.

By the time the Eagles were finished, what started out as a close contest was not close at all. Oakridge rushed for 496 yards and emerged with an impressive 61-27 victory over North Muskegon on Thursday in the West Michigan Conference opener for both teams.

Running back Leroy Quinn led the way for Oakridge with 228 yards and three touchdowns on 20 carries.

“I had a lot of confidence in the guys up front,” said Oakridge coach Cary Harger about his offensive line, which blew open a lot of big holes for the runners. “I know what they are capable of and they were up for the challenge.”

The first quarter provided many challenges for the Eagles. 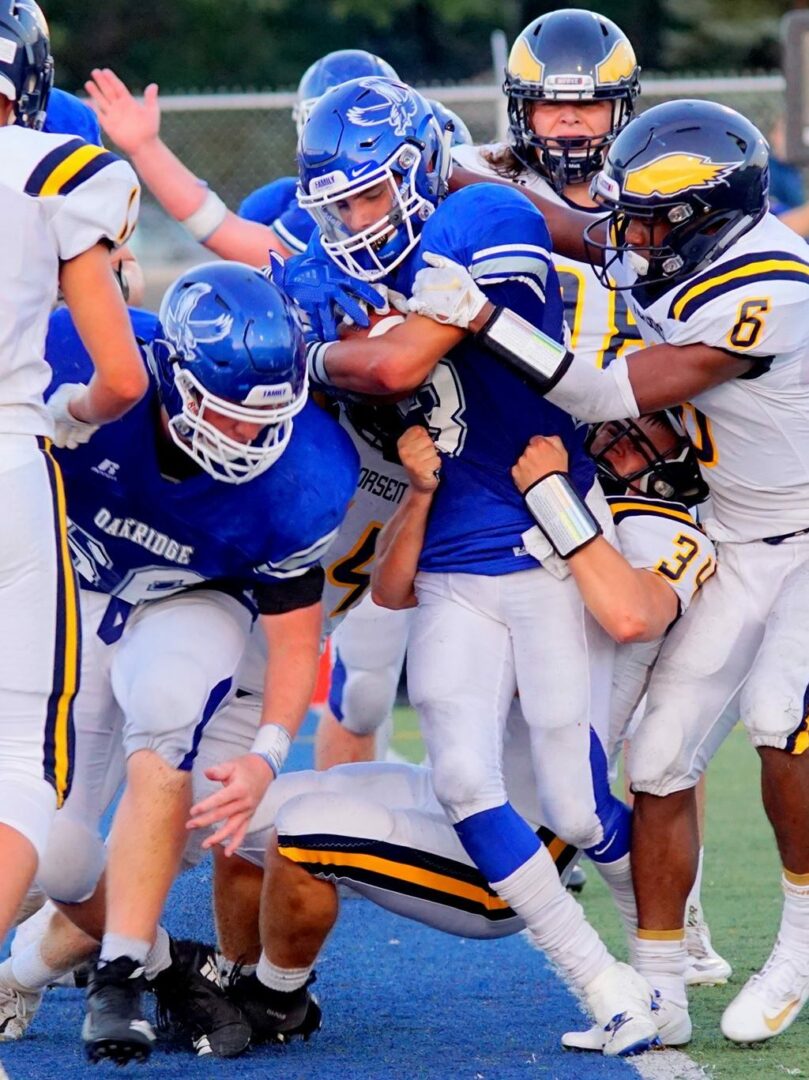 Oakridge’s No. 3 Dylan Coffman pushes his way into the end zone for Oakridge. Photo/Leo Valdez

North Muskegon took the opening kickoff and drove 64 yards on eight plays to take a 6-0 lead on Chandler Edward’s 3-yard touchdown run just 3:28 into the game.

Oakridge responded less than three minutes later when Quinn rolled into the end zone from a yard out. The PAT was good, and the Eagles led 7-6.

The next Norse possession was a two-man affair. First quarterback Mack Young hit TJ McKenzie for a nine-yard gain, then they connected on the following play for a 43-yard touchdown strike.

Young passed to Edwards for the two-point conversion, capping a drive that lasted all of 40 seconds, and the Norse led 14-7.

“We knew we were in for a game with the athletes they have,” Harger said about North Muskegon. “We knew they had weapons to take advantage of, and they did. We just kept plugging along.”

While the Young-to-McKenzie connection gave the Norse a temporary lead, the Eagles turned to Quinn on the ensuing drive.

It turned out to be a three-play drive, all Quinn carries, covering 63 yards. He finished it with a 38-yard rumble up the middle for a score. A missed extra point left North Muskegon with a 14-13 lead with 3:39 left in the opening frame.

The Norse took the ensuing kickoff and drove right down the field into scoring position. But facing a 4th-and-goal at the Oakridge 2, Chandler Edwards was stopped for no gain to end the quarter and give the ball back to the Eagles.

The Oakridge offense then took control, scoring 20 unanswered points, starting with a nine-play, 98 yard drive that resulted in a two-yard score by quarterback Koleman Wall. 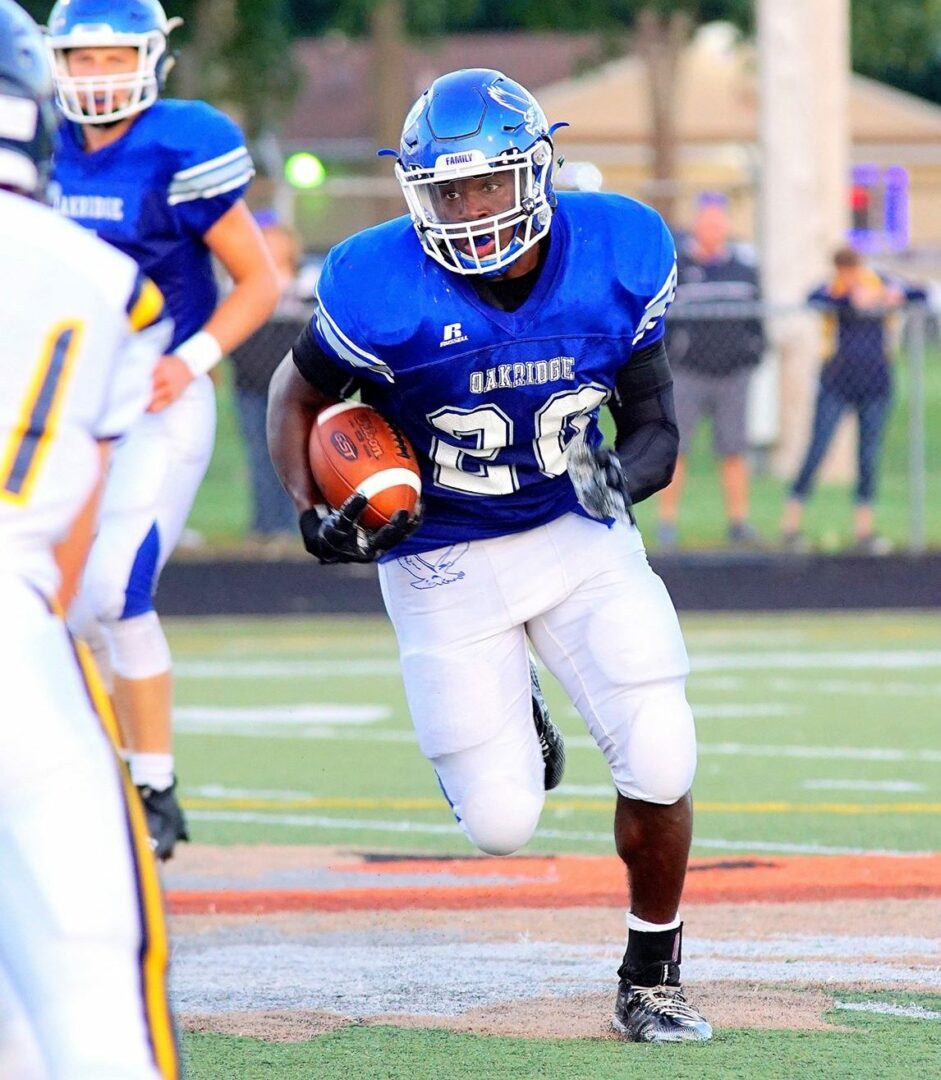 Oakridge running back Leroy Quinn eyes up the field on the rush. Photo/Leo Valdez

Jalen Hughes finished the second quarter with two TD runs (four yards and one yard) for the Eagles, and the hosts went to the locker room with a 33-14 lead.

“Their offense just doesn’t stop,” Norse coach Larry Witham said. “We knew it would be tough to stop what they do offensively. We had them on their heels a little bit, but hats off to them, we couldn’t stop them.”

Hughes added his third score of the game 1:43 into the third quarter, giving Oakridge a 40-14 lead.

North Muskegon continued to battle. Young found McKenzie with a 23-yard touchdown pass to cut the Oakridge lead to 40-21 with 7:37 left in the third quarter.

After Wall scored from two yards out to put Oakridge up 47-21, Young found Jesse Cooke with a 48 TD pass to get the Norse back to within 47-27.

Blake Masterman’s one-yard touchdown run gave Oakridge a 54-27 lead at the end of the third quarter, and Quinn scored from six yards out on the opening play of the fourth quarter for the final Eagles score.

“Our offensive line was phenomenal,” Quinn said. “When we fell behind, coach said it was time to work and he kept feeding us the ball.”

Masterman finished with 117 yards on 12 carries and Hughes added 112 yards on 13 carries for the Eagles, who had 541 yards of total offense.

North Muskegon finished with minus-38 rushing yards on 22 carries, but Young completed 17 of 24 passes for 395 yards. McKenzie had eight catches for 211 yards while Cooke finished with three for 92 yards.

Oakridge, how 2-0 overall and 1-0 in conference play, will visit Shelby next week. North Muskegon, 1-1 and 0-1, will visit Ravenna.

Jayhawks roll past Ancilla College in volleyball, improve to 6-1 in conference 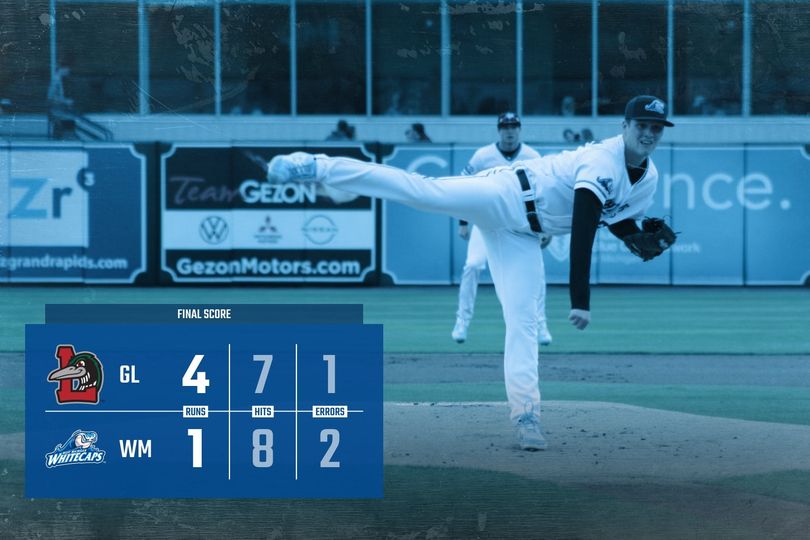