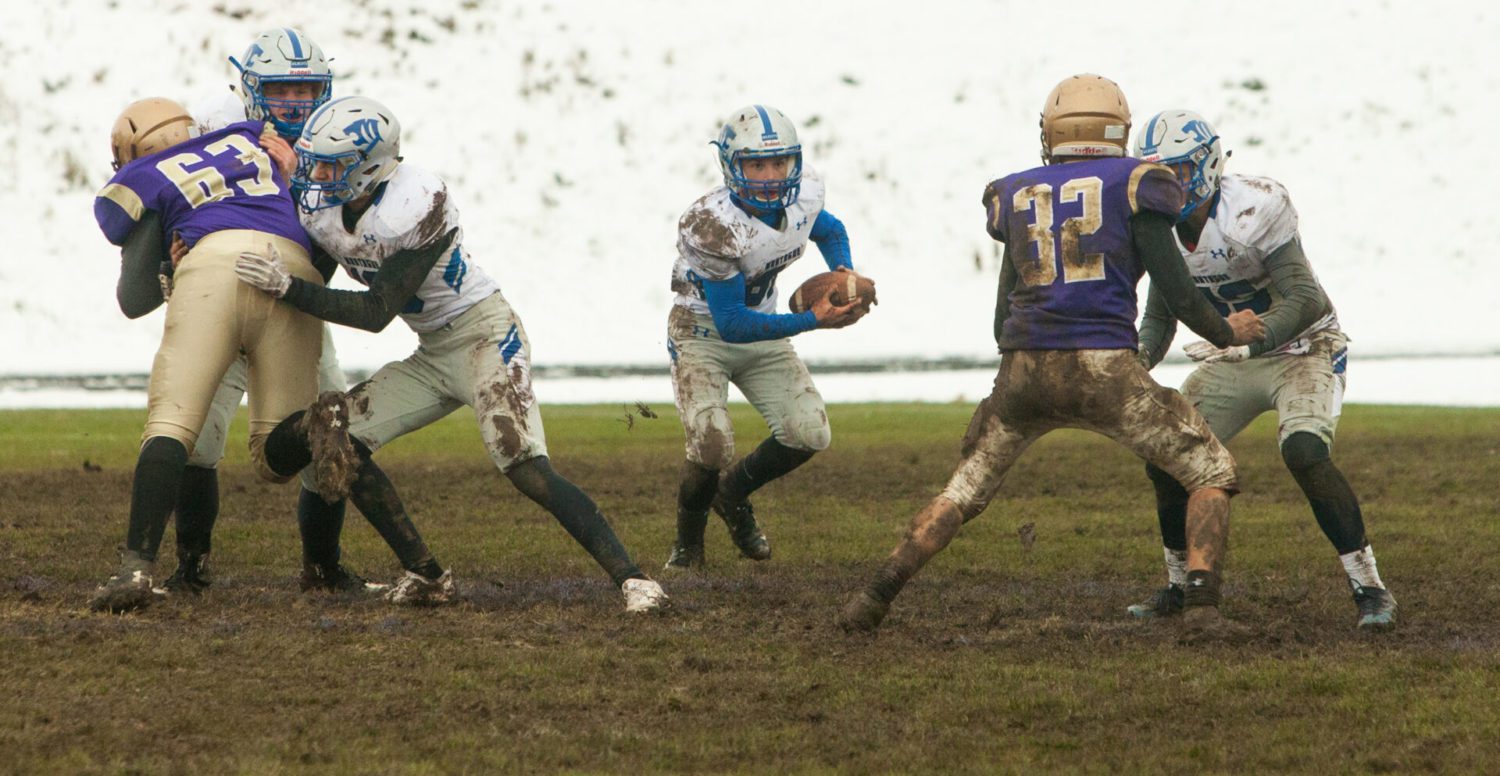 By Andrew Johnson
LocalSportsJournal.com
MONTAGUE – Before the football season began, pretty much everyone expected Montague

to have a great year and go a long way in the state football playoffs.

The Wildcats posted an 11-1 record in 2017, advanced to the regional finals, and had a ton of key players return this fall.
But the 2018 regular season didn’t to quite according to script for the Wildcats.
They were still very good, winning seven games in the regular season and capturing the West Michigan Conference title. But they lost two regular season games – albeit to outstanding teams from Reed City and Portland – and some people wondered if they may have taken a step back this fall.
But after three straight convincing playoff wins, it’s obvious that Montague is right where it belongs, preparing for Saturday’s Division 6 state semifinal game against undefeated Traverse City St. Francis at Mount Pleasant High School at 1 p.m. 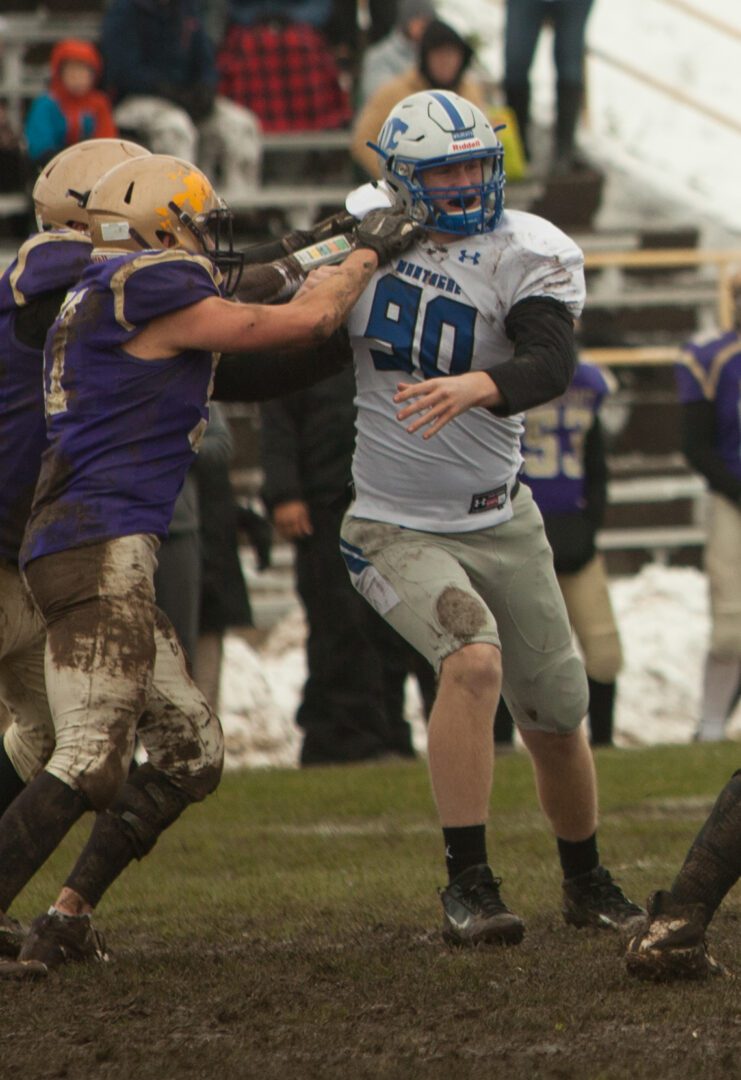 The winner advances to the state championship game a week from Saturday.
“We wouldn’t do anything different,” said Montague head coach Pat Collins. “We’ve established high- end goals, and we had some adversity that we’ve gone through that has made us stronger. We rallied around injuries and we’ve become a better team because of it.”
One of those injuries was to 2017 star quarterback Sebastian Archer, who moved to the running back position in this year. He’s overcome a nagging shoulder injury and collar bone issue and adjusted to his new position just fine, totaling 487 yards and 12 touchdowns on 87 carries this season.
“He’s been great,” Collins said. “I think he was pretty frustrated that he couldn’t be himself. He had a tough middle of the year and wasn’t able to help us as much as he’d like at times. But his spirits are up and he’s back to helping us win.”
Another running back who has provided a lot to the Wildcat offense is senior Bryce Stark, who has totaled an impressive 1,422 yards and 24 touchdowns on 180 carries for a 7.9 yard per carry average.
“Bryce is the epitome of selflessness,” said Collins about Stark, who had 245 yards and three touchdowns in last Saturday’s regional final victory over Schoolcraft. “He’s all in on doing what it takes for the team. He doesn’t care about stats or anything but winning. He’ll do anything for us, whether it’s blocking, receiving or rushing.”
While the rushing attack is the focal point for the Montague offense, the passing game has come along nicely, as well. Sophomore quarterback Drew Collins, who stepped in for Archer, has thrown for 1,715 yards and 16 touchdowns. 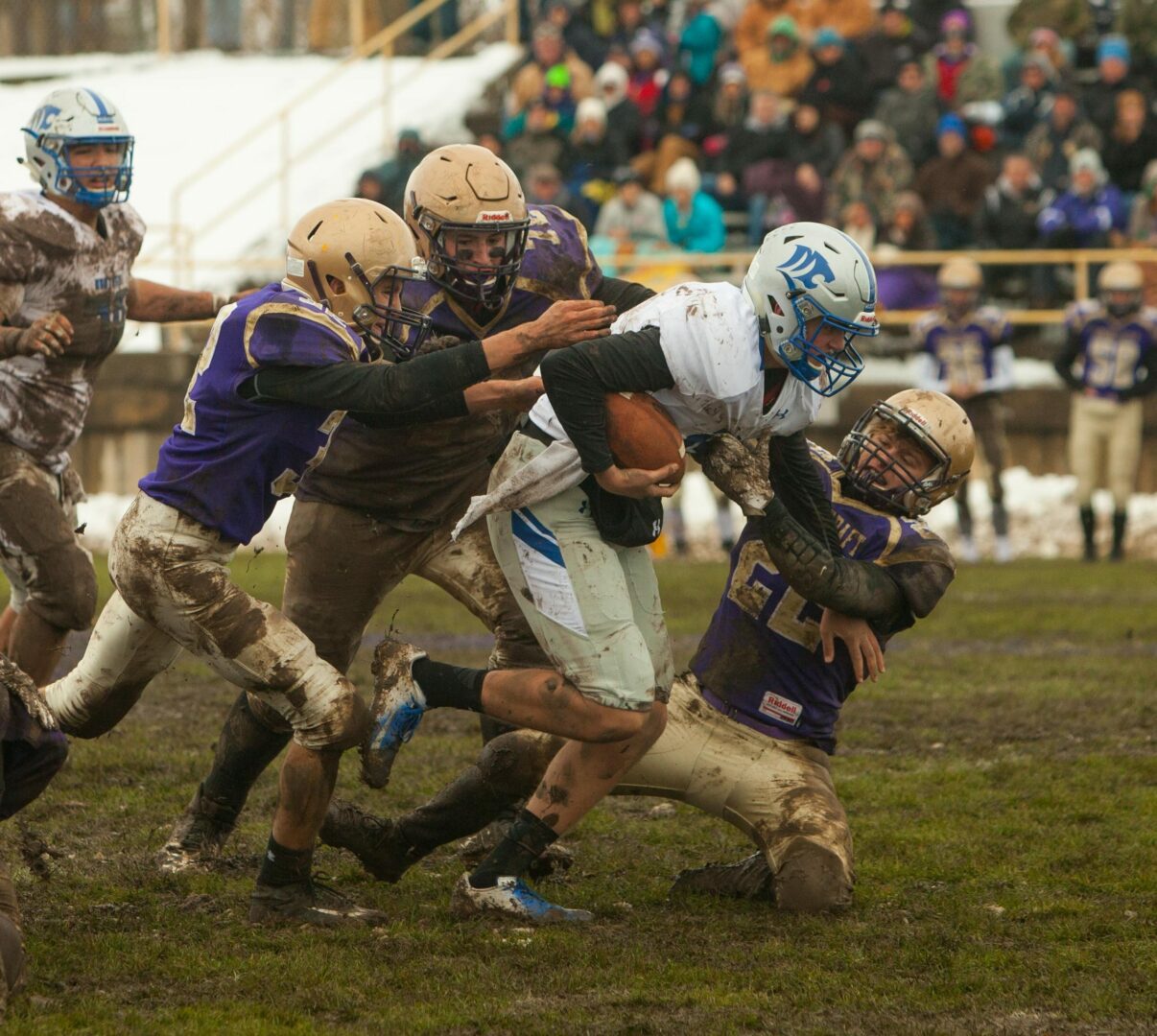 Montague QB Drew Collins finds room for a big run in the regional finals to set up a Wildcats score. Photo/Jason Goorman

“I would say he’s improving,” said Coach Collins, who happens to be the QB’s dad. “He’s kind of grown up and gone through the process while hitting a growth spurt physically. His growth, combined with coaching from (assistant coach and former Montague star QB) Cody Kater, has really helped him.”
While the offense has averaged 43.1 points per game this season, the Montague defense, which has only allowed 15.1 points per game, will be the focus on Saturday.
“They’re going to run at you,” said Collins about the Traverse City St. Francis offense, which has averaged 47.6 points per game this season. “They’re well-coached and fundamentally sound. They’re going to try and pound you, whether they line up in the wing-t or wildcat.”
One of those rushing threats for the Gladiators will be Danny Passinaul, who averaged 10.7 yards per carry during the regular season while also punching in 14 touchdowns.
“He’s a rocket,” said Collins about Passinaul, who totaled 101 yards and three scores in a victory over Kingsley in the regional finals. “He’s fast and explosive. He’ll take off the perimeter or run downhill.”
One disadvantage for Montague may be St. Francis’ recent playoff experience. The Gladiators will be playing in their second straight state semifinal, and third in the past four years.
Montague hasn’t played in a state semifinal since winning the state title in 2009, but that doesn’t trouble Collins, due to the big game experience his team has.
“I think it can play a role, but I think both teams have been on the big stage,” the coach said. “I think we have a lot of kids who’ve been in big moments. A lot of our guys were on the field against Ithaca (a loss in the regional finals) last year, and we had moments to learn from in that game.”