dominant first half on Friday inexplicably turned to quick sand.

And once the Eagles fell in, they couldn’t pull themselves out.

Aided by three second-quarter turnovers by Hudsonville Unity Christian, Oakridge built what seemed like an insurmountable 35-8 lead at halftime.

But the Crusaders rode a tidal wave of momentum in the second half and fought all the way back to claim a stunning 40-37 victory over Oakridge in a Division 5 district championship game at Jenison High School.

Unity Christian, 9-2, advances to next week’s regional round against Kalamazoo United, which defeated Hopkins on Friday. 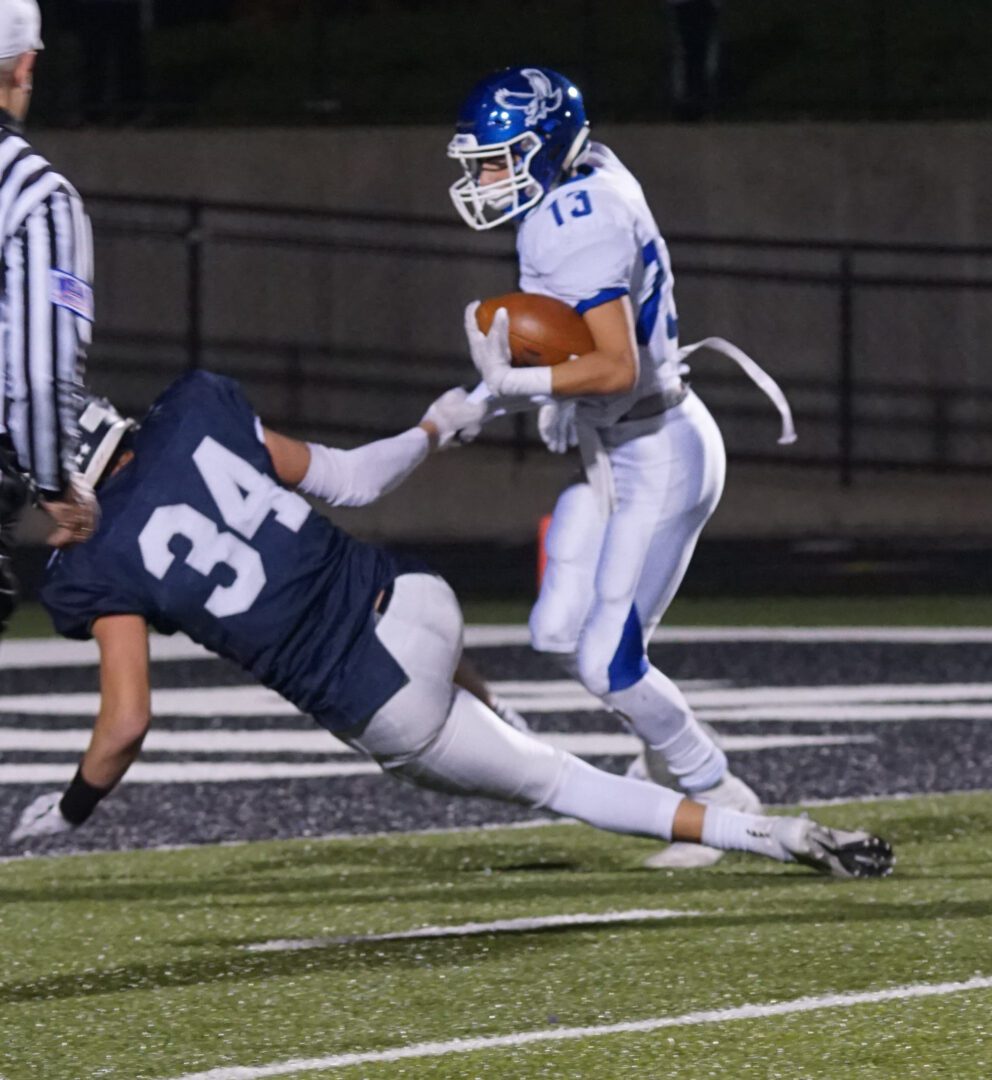 Jalen Hughes fights his way into the end zone for Oakridge. Photo/Leo Valdez

Oakridge ended its season at 9-2, with its only losses coming on a one-point heartbreaker to rival Montague and Friday’s unthinkable finish.

Oakridge coach Cary Harger said his squad hadn’t faced a team like Unity Christian, which features a dominant rushing attack. The Crusaders totaled 192 yards on the ground in the second half alone, and 327 overall.

“That first half was ours, but we tried to make sure the kids stayed grounded, and tried to make them realize that (Unity) has a lot of playmakers,” Harger said. “They really took advantage of the outsides of the field and getting kids in space. And they were able to get out there on the edge and were making some blocks. They have a great, great team.”

The Eagles were outstanding in the first half, when they piled up 312 yards, including 221 on the ground.

Unity grabbed an 8-7 lead on a short touchdown run by Max Buikema late in the quarter, but the Crusaders’ mistakes allowed the Eagles to flourish in the second.

After a two-yard Leroy Quinn touchdown run helped Oakridge regain the lead, the Crusaders floundered with a botched fake punt attempt, giving the Eagles’ great field position. They answered quickly when Jalen Hughes scored on a 15-yard burst through the middle, giving Oakridge a 21-8 lead. 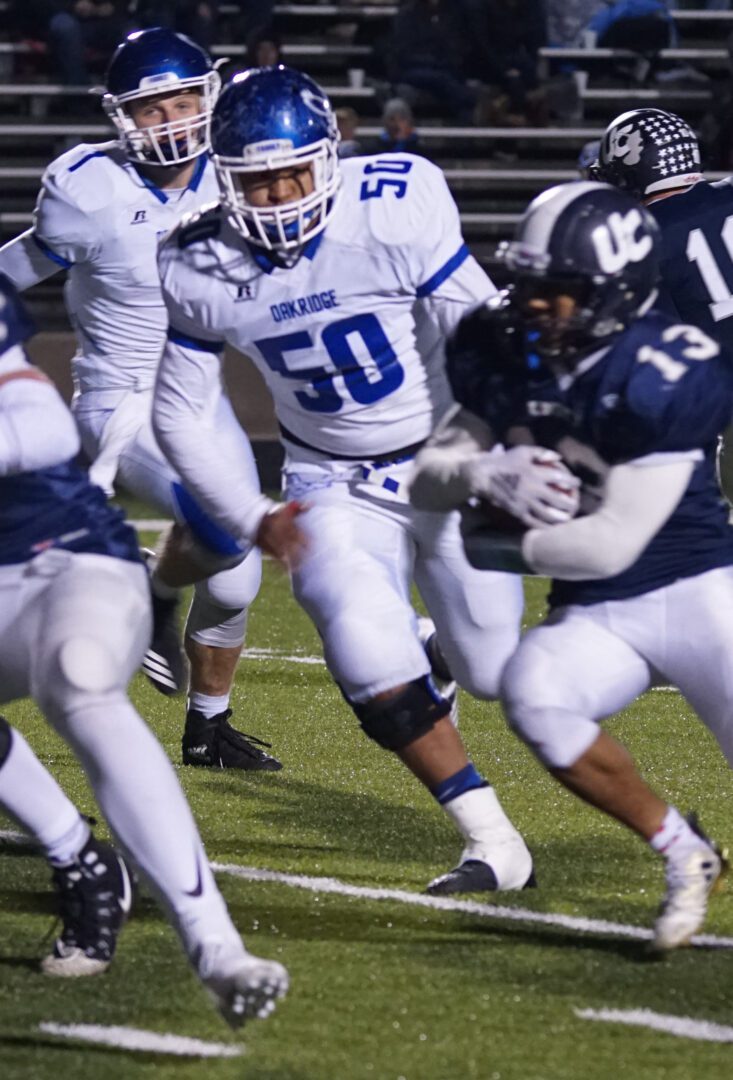 Unity fumbled on their next possession and Oakridge struck again two plays later, with Quinn blazing 39 yards for his second touchdown.

Unity’s last turnover was its most costly. Fighting for extra yards near the goal line, Buikema had the ball knocked loose and it rolled into the end zone, where Oakridge scooped it up for a touchback.

On the ensuing play, Hughes broke free off left tackle and was gone, racing 80 yards to give the Eagles a 35-8 halftime lead.

Unity head coach Craig Tibbe said he tried to stay positive at the half, despite the bleak situation.

“You can’t yell at them at that point,” he said. “They’re already feeling bad. We just said, ‘Guys, you gotta dig. And they did it. They came out and really played well.

“I feel bad for (Oakridge),” he added. “Man, (Harger) had those kids ready and we were not. They had us in the first half. They had us. I’m just thankful the game didn’t end there.”

The third quarter was a completely different show, when Unity Christian had a 16-0 advantage on the scoreboard and outgained the Eagles 134-5.

Junior quarterback Isaac TeSlaa sparked the rally. He opened the third with a 56-yard sprint to the end zone, and continued to showcase his speed and playmaking ability, totaling 116 yards on 16 carries in the game.

Trailing 35-24 entering the fourth, TeSlaa’s 1-yard sneak and an ensuing 2-point conversion run by Malekhi Obande cut Oakridge’s lead to 35-32 with 10:41 to play.

Oakridge, which totaled just seven total yards in the second half, went nowhere on its ensuing drive, but a great punt by Quinn and tremendous punt coverage pinned the Crusaders at their own 2. Three plays later, Oakridge senior end Nate Fair tackled TeSlaa in the end zone for a safety, giving the Eagles some breathing room at 37-32 with 7:50 remaining. 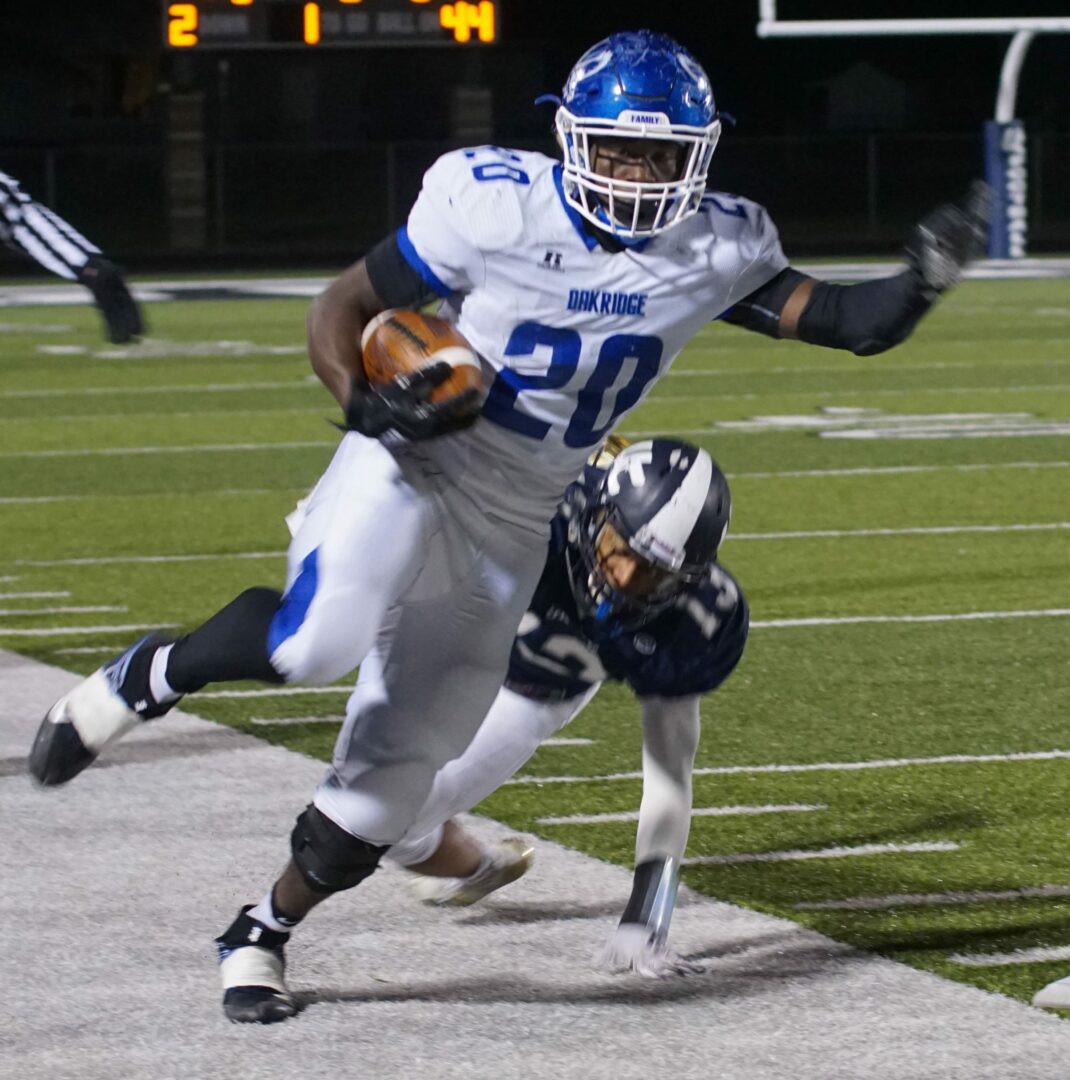 Leroy Quinn gets knocked out of bound for Oakridge. Photo/Leo Valdez

But the Eagles’ offense continued to sputter, going three-and-out and giving Unity Christian great field position at the Oakridge 30. TeSlaa capped the comeback with a run to the outside and a sharp cutback for a 19-yard score.

Unity converted all five of its 2-point conversions, including its last attempt by Obande to put the Crusaders up 40-37.

Oakridge got the ball back on the 20 with 3:12 left, but three straight incomplete passes ended any thoughts of late-game magic. Unity took over, got a key first down and was able to take a knee three times in a row to run out the clock.

Quinn, who banged up his knee in the third quarter and was limited the rest of the way, finished with 72 yards on 12 carries. Hughes led Oakridge with 89 yards on five carries. Defensively, senior lineman Brandon Wilde had a huge game, with 17 total tackles and a sack.

Harger shifted from coach to supportive dad at the end, consoling his son, Cole, and several crushed Eagles players.

“It’s tough,” the coach said, his voice cracking. “I pulled (Cole) out near the end and the first thing he said to me is ‘sorry.’ I told him he had nothing to be sorry about. He had a fantastic senior season. So it’s tough. Tough all the way around.

“(The seniors) demonstrated being leaders without flaw,” Harger added. “Character, commitment level, loyalty, intensity, everything. That bar is set. They’ve established where that bar is at, and it’s high. Every year we think we squeeze a little bit more out of them, commitment-level wise and attendance wise, and they were there. It’s been a great group to coach.” 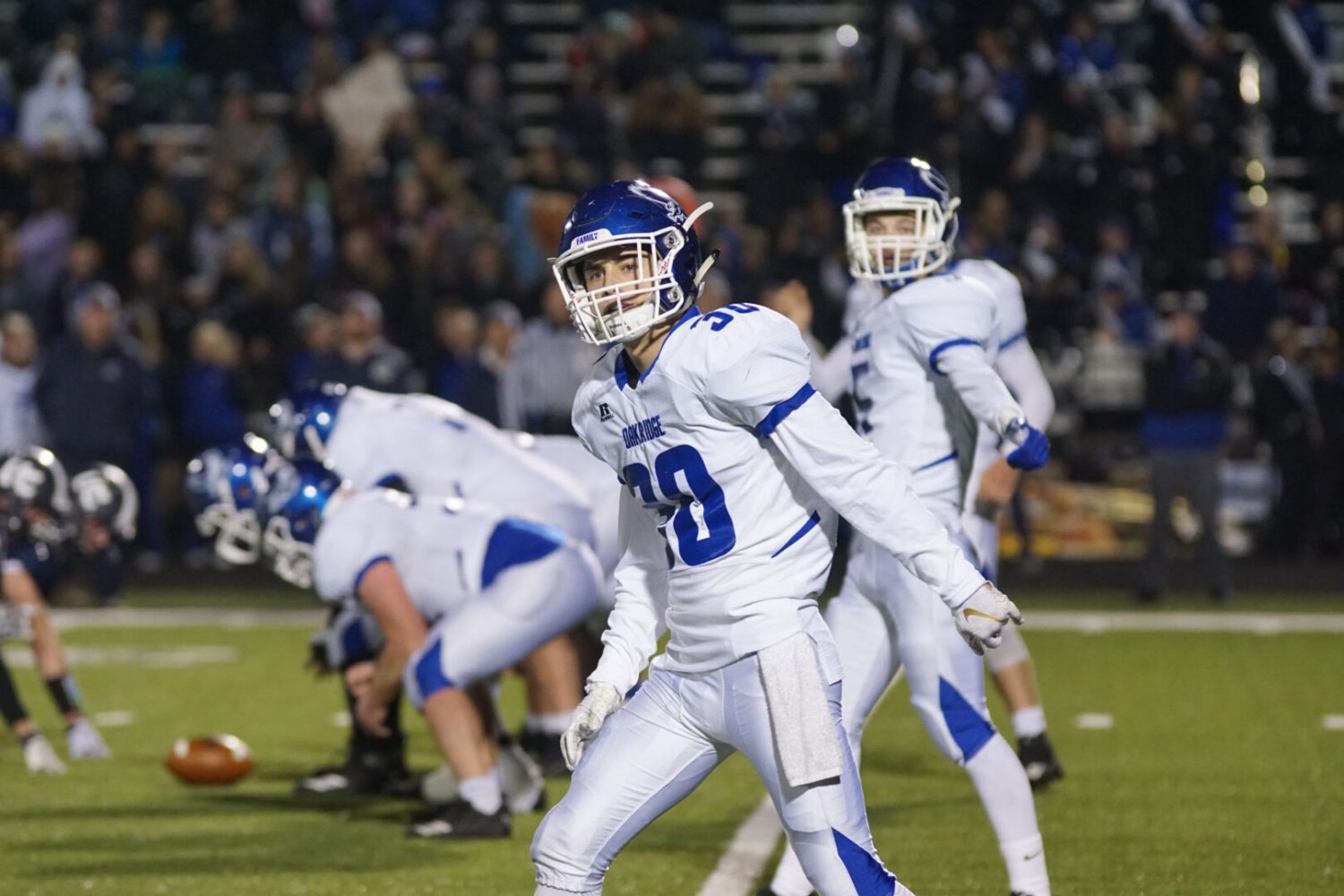 Jacob Danicek lines up on the end for Oakridge. Photo/Leo Valdez

Jalen Hughes fights his way into the end zone for Oakridge. Photo/Leo Valdez 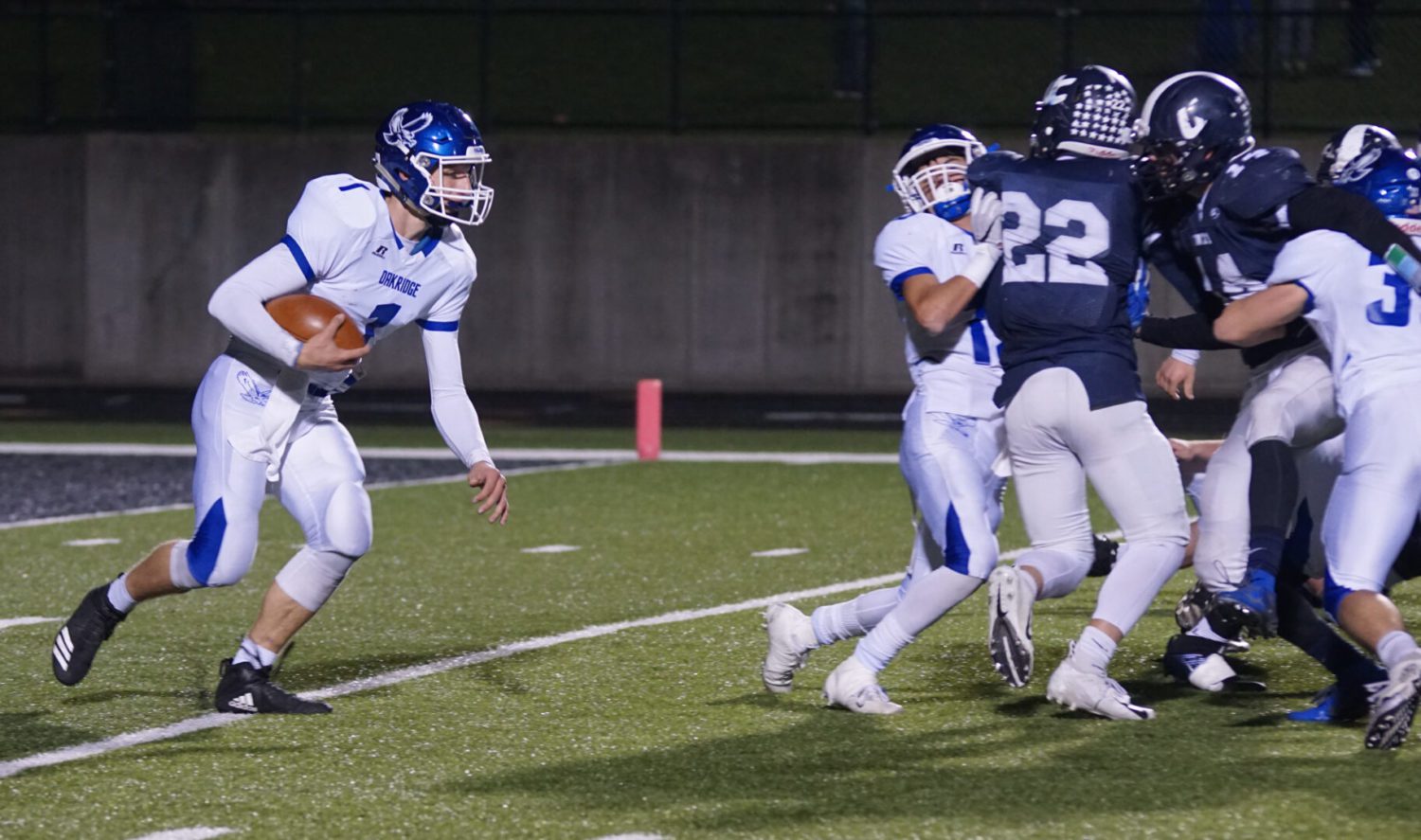 Koleman Wall looks to rush out of the backfield for Oakridge. Photo/Leo Valdez 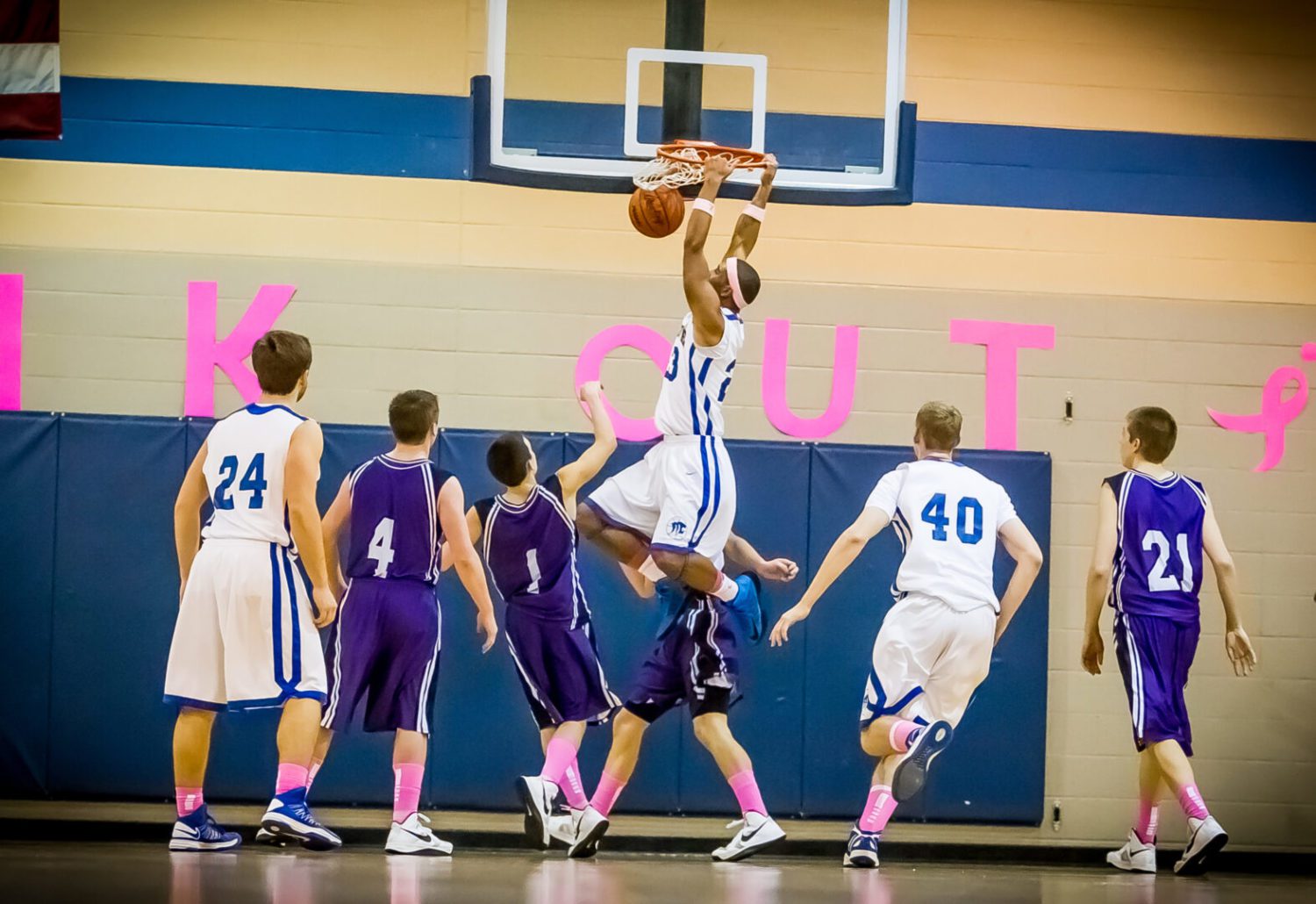