MONTAGUE – If it wasn’t for a teen growth spurt, and tons of determination, Montague junior Reilly Murphy likely would be closer to

zero kills this season, rather than the team-leading 564 she has piled up.

Her twin sister, Raegan Murphy, would not have a team-leading 1,350 assists.

The Murphys did not make the volleyball team when they tried out in seventh grade. That’s because they were short, couldn’t get their hands over the net while jumping, and had trouble serving.

For a lot of youngsters, that disappointment would have meant moving on to a new extracurricular activity. 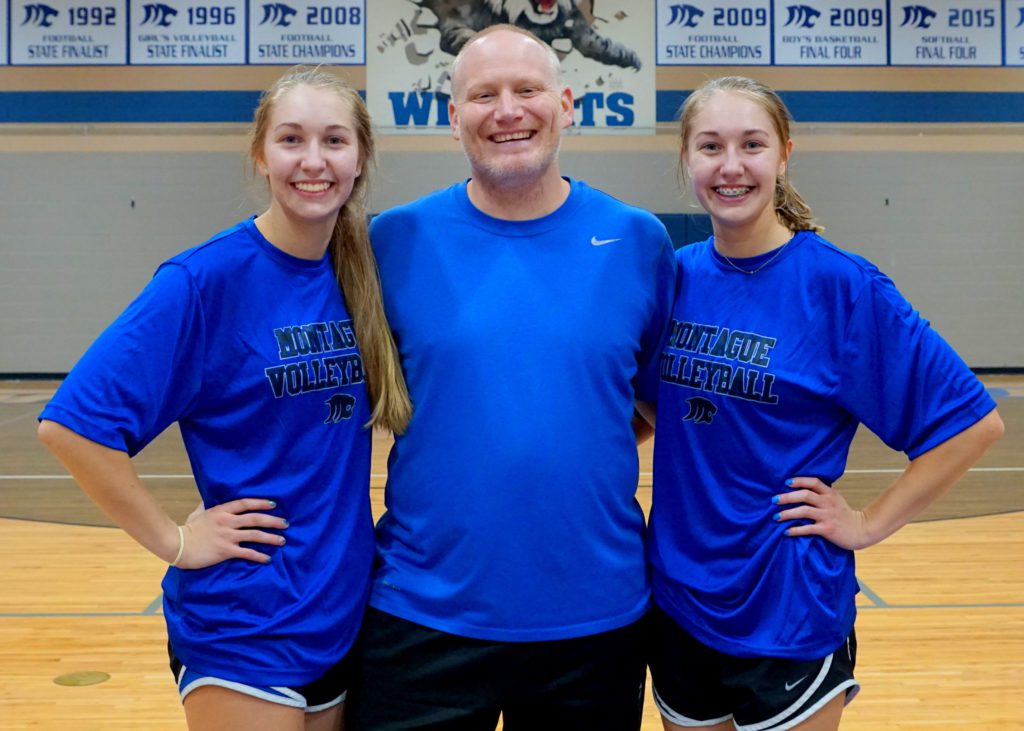 But the Murphys kept working, growing and improving, and earned roster spots in the eighth grade.

Reilly played only the one year of middle school volleyball, then skipped junior varsity altogether and was called up to varsity as a freshman. Raegan made the varsity a year later as a sophomore.

Now standing about 5 feet, 7 inches tall, they are two big weapons for Montague, which is currently 36-12-1 on the season and took first place in the regular season West Michigan Conference standings with a 7-0 record.

“My sister and I were really short back then,” said Reilly Murphy about the disappointment they felt about being cut in middle school. “We were told that we were short and that if we grew a little, we’d be able to make the team probably.

“I never thought it was going to happen, honestly. But we just kept at it and kept trying.”

But the day ended on a gloomy note for the Wildcats when they were upset by Fruitport in five tough sets in the championship match, and had to settle for runner-up status. 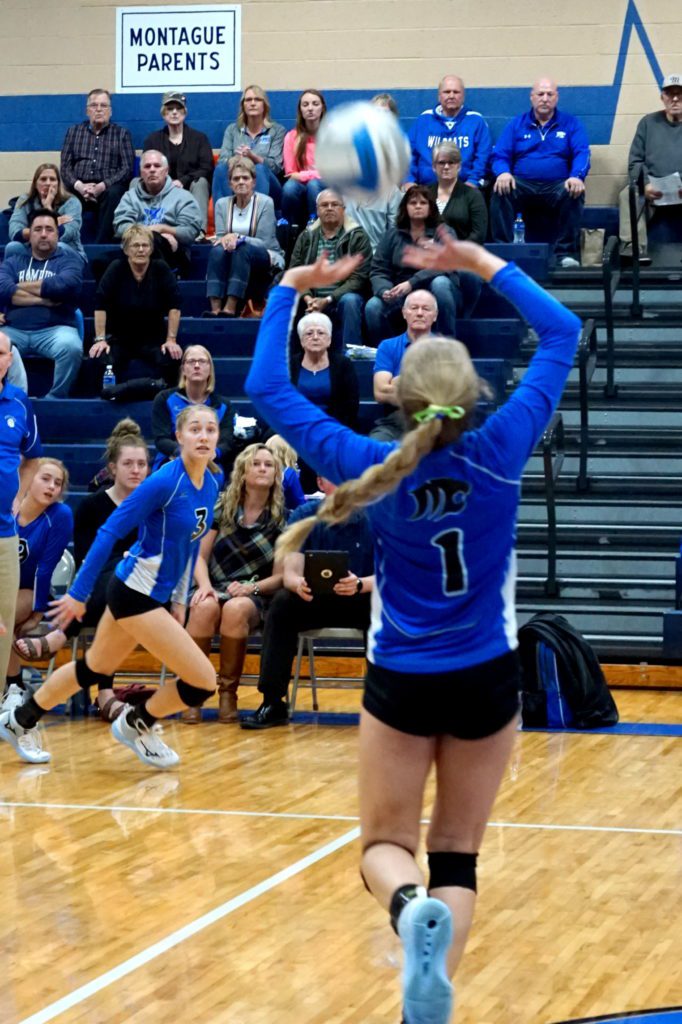 No. 1 Raegan Murphy sets up her sister Reilly Murphy at the net. Photo/Leo Valdez

“It was disappointing,” Reilly said. “We beat them earlier in the season, and we kind of took it less serious for the first couple of sets. We tried our best and were winning the last set, but I don’t know what happened. It was kind of sad, but we know we have our conference tournament and state tournament still ahead of us.”

Montague has actually won the regular season conference race three times in the past four years, but failed to win the tournament and therefore the conference title in two of those seasons.

The Wildcats are also focusing on the Division 2 state tournament, starting with districts. Last year turned out to be a disappointment, when the Wildcats fell to Spring Lake in the district semifinals.

But the past is the past, and the Wildcats are focused on the future, particularly with such a talented lineup. Besides the Murphy sisters, other statistical leaders for Montague include junior Ally Hall with 90 blocks and senior Maddy Wynn with 534 digs and 82 service aces.

“We’re really studying our game now,” Reilly Murphy said. “We’re trying to take it one game at a time. We’re focusing in on our opponents a lot more and we want it so bad.”

Montague Coach Shawn Bectel said the team has definite goals, and the right attitude to accomplish them.

“Conference is always a goal we talk about,” the coach said. “We also look at districts. We know last year we didn’t get as far as we wanted to, but we have everybody back this year. Districts are very much on our minds, and even going further. We want to be a top program.”

With the Wildcats only having one senior this season, Bectel has relied on Reilly to be a leader on a team that also includes eight juniors, two sophomores and one freshman.

“She’s more of a lead-by-example kid,” he said. “She’s pretty humble and never talks to me about her stats. To her, she’s just out there doing her job. She would trade her stats for wins any day.”

For Reilly, the thought of making up for the disappointment of the city tournament, and winning a few trophies in the coming weeks, is exciting.

“We talk about it a lot,” she said. “In our school, we have banners which note titles, and we talk a lot about hanging one. We’re a big football school, and for us to hang a banner like that, it would be really big.”