MUSKEGON TOWNSHIP – Dayton Rose looked almost bewildered at the scene around him, a huge swarm of fans cherishing an accomplishment that hadn’t

been experienced at Orchard View High School in 14 years:

“This is probably one of the greatest feelings in my life,” the Cardinals’ outstanding two-way lineman said after his team completed a 9-0 regular season with a 32-20 victory over North Muskegon on their home field Friday night. “We’ve come a long way. We went 2-7 my freshman year, 3-6 as sophomores, and 2-7 last year.

In his next breath, Rose gave credit where credit was due, praising first-year head coach Fred Rademacher, who installed the Wing-T offense and had the Cardinals believing in August that a special season was obtainable. 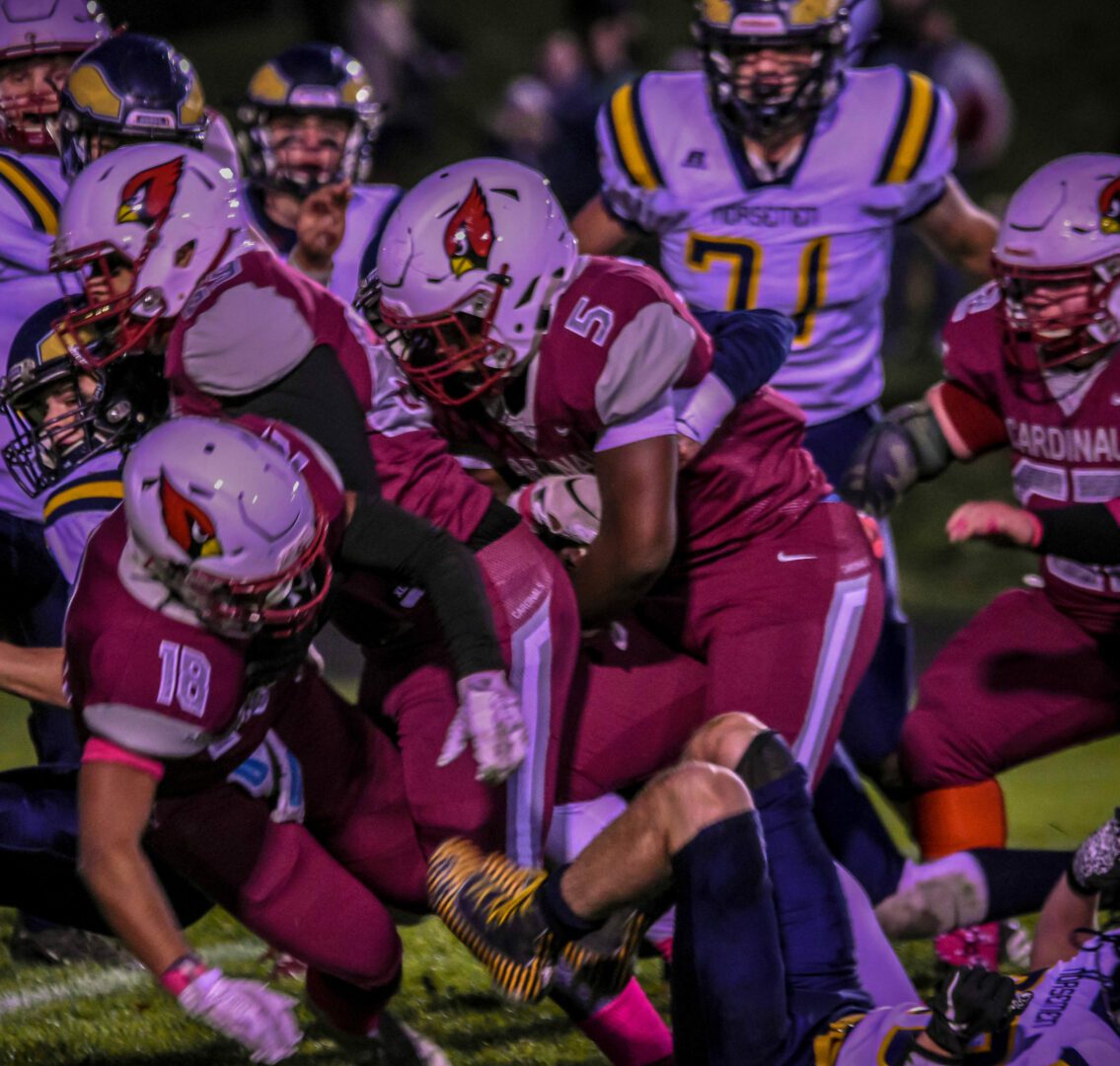 OV’s No. 5 Edmari Mitchell searches for room to run in a heap of players. Photo/Mitchel Dixon | MSD Photography

“That man Fred Rademacher is a special guy,” Rose said. “He got us believing. But we come and work every day. This happened because of a lot of hard work.”

Led by outstanding blocking in the interior of the offensive line, spearheaded by Rose at left guard, the Cardinals amassed an impressive 322 yards rushing on 56 carries. They did most of their damage in the first half, thanks in part to game-changing miscues from North Muskegon. The Norsemen committed four turnovers in the first half, which put them in a big hole.

By the end of one quarter, OV had a pair of short touchdown runs by bruising senior running back Edmari Mitchell, plus a pair of two-point conversions. North Muskegon, on the other hand, ran just five plays and had three turnovers – a fumble, an interception by OV senior Alex Andrews, and a miscue on a kickoff when OV’s short, line-drive kick bounced off a Norse player and into the grasp of the Cardinals.

It only got worse for the Norsemen on the first series in the second quarter, when OV capped its third scoring drive with a 4-yard touchdown run by junior fullback Brendan Hyatt. His ensuing two-point conversion run gave OV a 24-0 advantage.

Hyatt was extremely effective on simple fullback dives up the middle, totaling 145 yards on 20 carries, 118 of which came in the first half.

“Football is won in the trenches,” Rademacher said. “Really, that’s been our biggest turnaround. We have a tremendous offensive line and they work really hard. They’ll do their jobs and backs, you do your job, and we’ll do some great things.” 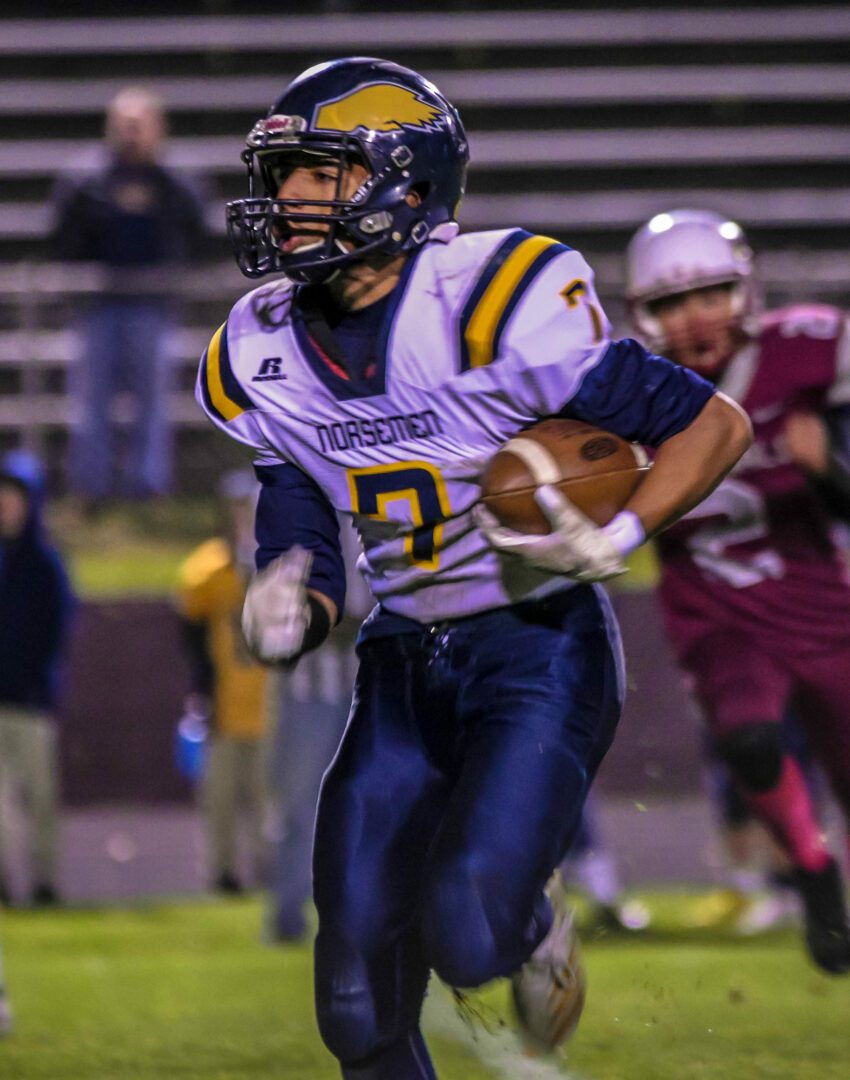 The Norse got on the board with a quarterback sneak by senior John Hayhurst with 4:50 left in the half, but trailed going into the locker room, 24-6.

Despite facing the big deficit, North Muskegon refused to go away quietly. The Norse began to turn the game around with their passing game and their ability to control time of possession. They limited OV to seven plays and 46 yards in the third quarter, while Hayhurst began to make big plays with both his arm and legs.

Hayhurst completed four key passes near the end of the third, allowing him to score on a 4-yard keeper with no time on the clock. North Muskegon’s fans were roaring as the score closed to 24-14, but OV quickly re-established itself with its most important drive.

The Cardinals turned in a nine-play, 65-yard effort, with Mitchell scoring his third touchdown on a 19-yard run down the sideline. He also scored on the two-point conversion, making it 32-14 with 7:35 to go and deflating any Norse comeback hopes.

“I love my O-line, he said. “They do everything for me. I just score touchdowns. They got me.”

Hayhurst completed 25-of-39 passes for 279 yards, with two interceptions. His favorite target was Moat, who had a tremendous game with 12 catches for 173 yards. Senior Kyler Dana also had eight catches for 68 yards.

Both North Muskegon and OV will now be glued to the TV on Sunday as the MHSAA unveils the playoff field. The Norse will try to sneak into the field for the second year in a row with a 5-4 record. There’s no doubt OV is in, but nobody knows for sure whether the Cardinals will be in Division 4 or 5. There’s also rumors they could face nearby rival Oakridge, an idea OV players seemed to relish. 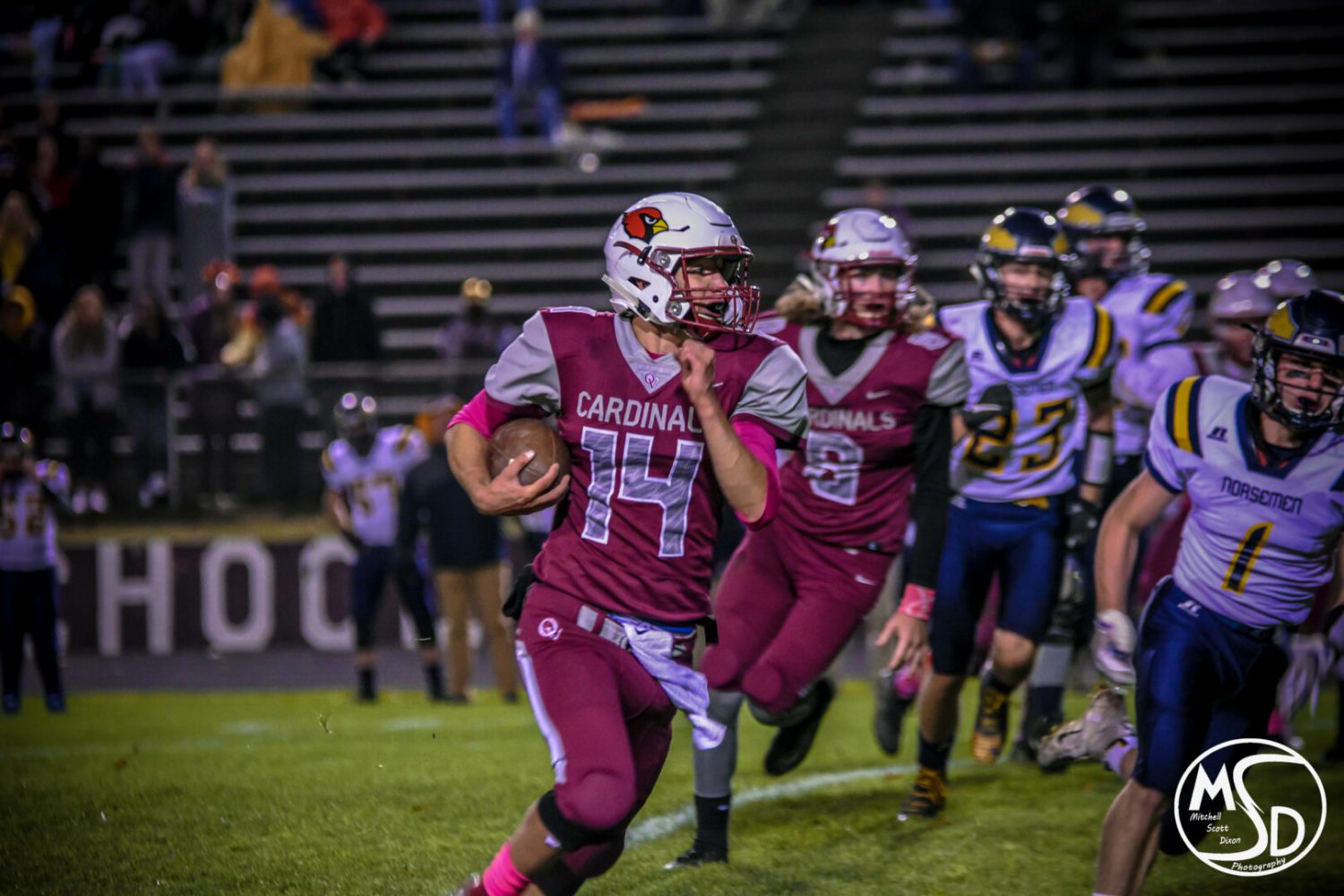 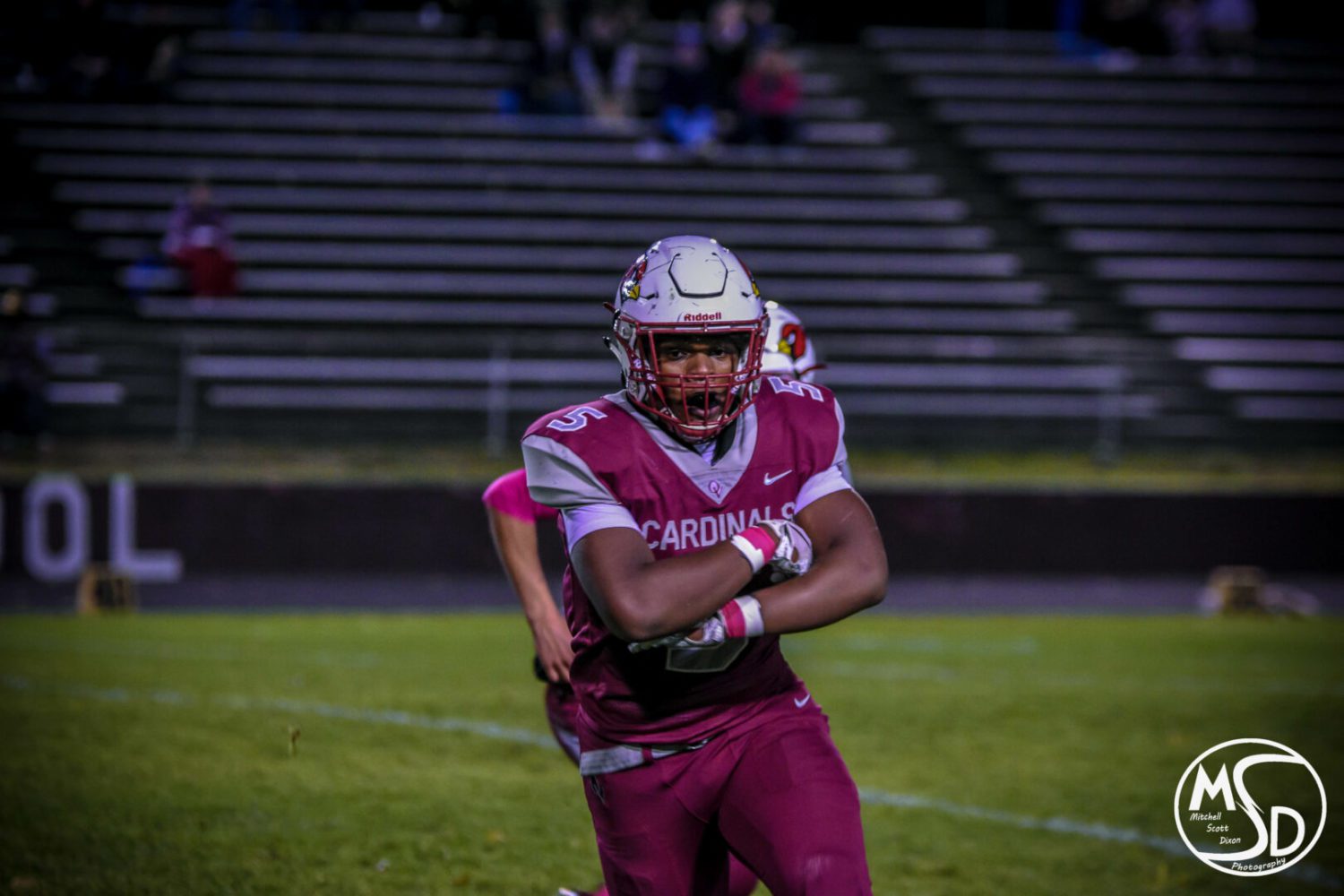 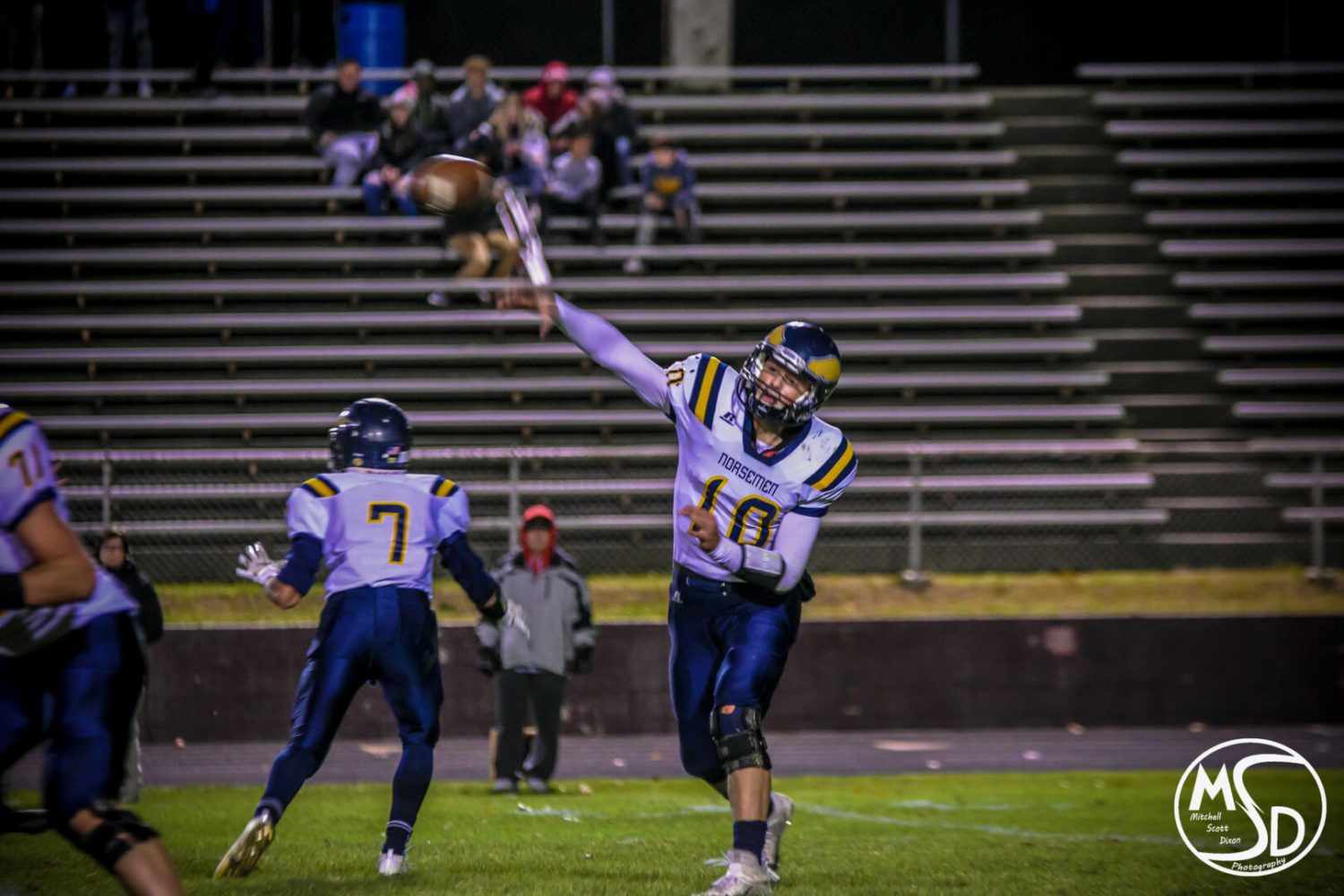 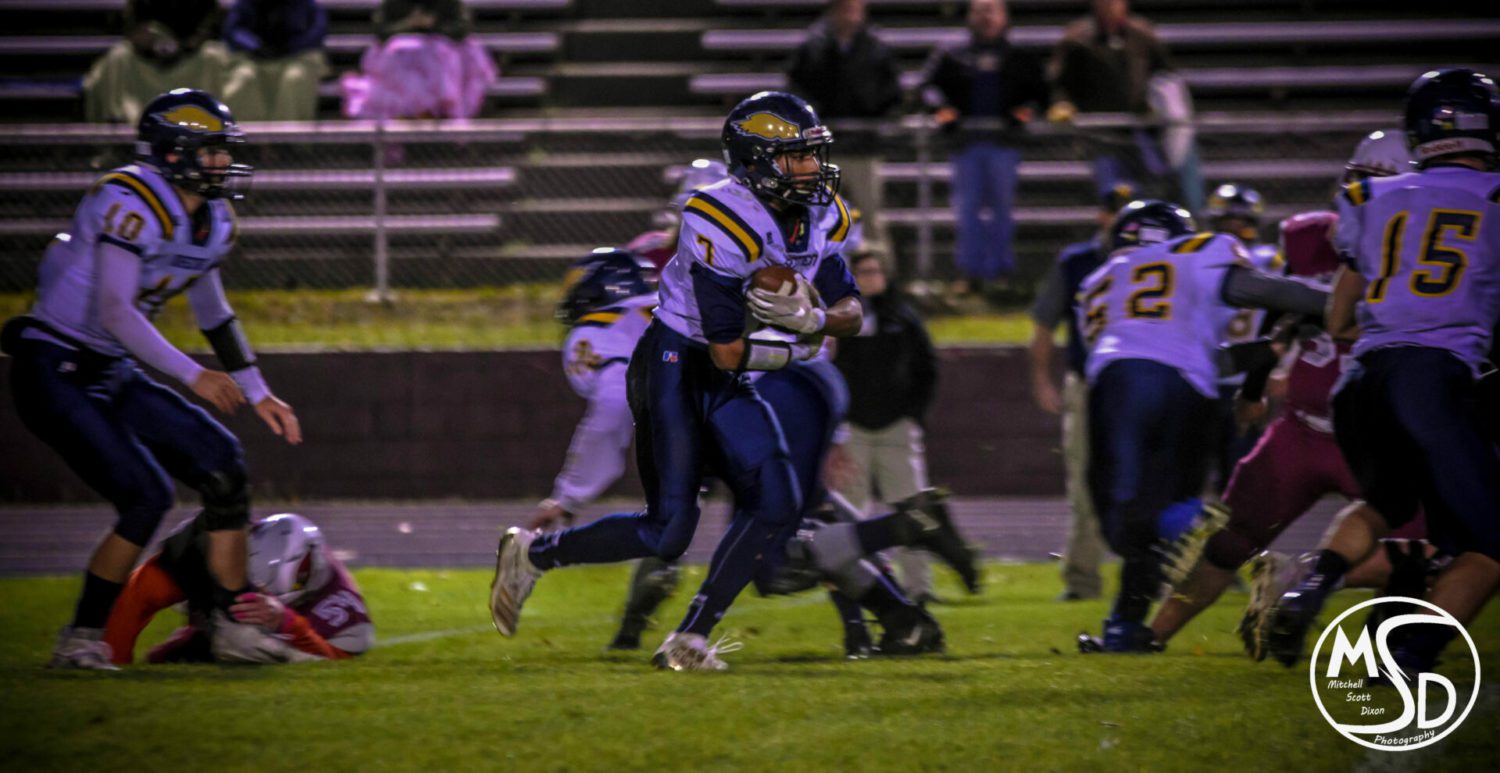 McManus leads North Muskegon over Montague in overtime with 18 points