At Spring Lake, it took a some key underclassmen a few weeks to earn their stripes.

But after a disappointing 1-2 start, the young Lakers have been simply dominant in their last three contests, outscoring Coopersville, Comstock Park and Grand Rapids West Catholic by a combined score of 111-0.

The sudden hot streak has the Lakers thinking about a state playoff berth for the second year in a row. Last year’s team snuck into the postseason with five wins, one less than the six required for an automatic berth.

While Spring Lake coach Dan Start is obviously happy about his team’s recent play, he’s hoping the Lakers don’t fade down the stretch like they did a year ago, when they started 5-0  but closed with five straight losses, including one in the first round of the playoffs. 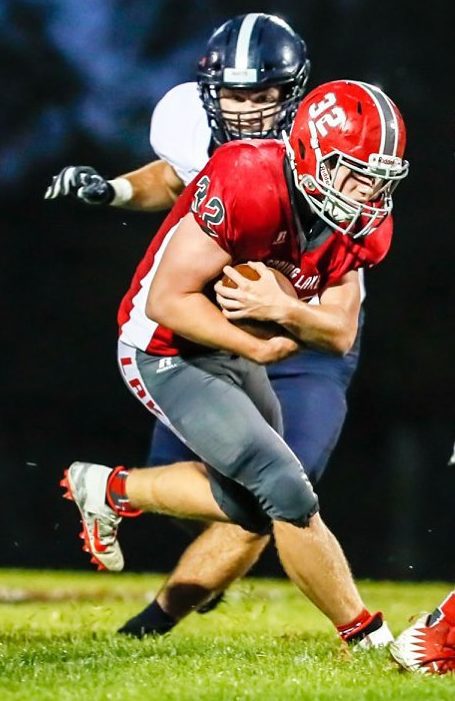 Maybe some youthful enthusiasm will do the trick.

“We started the season really young, with five, six sophomores and a freshman,” Start said. “We found out quickly that we had to grow up a little bit. There’s an adjustment period for the younger kids, to see how they needed to play both physically and at a speed to be successful.

“When we stopped worrying about what everyone across from us was doing and started focusing on improving ourselves, we started to get better.”

The remaining schedule doesn’t get any easier for the Lakers. The gauntlet begins Friday against perennial power Grand Rapids Catholic Central at Spring Lake’s Grabinski Field.  A victory for the Lakers would put them in a tie with GRCC for first place in the O-K Conference Blue Division.

Spring Lake will close the regular season against a pair of teams that are better than their records indicate – Allendale and Holland Christian, which are both 3-3.

To guarantee a playoff spot, Spring Lake will need victories in last two of their last three games.

“Some teams may be worrisome in facing that type of competition, but to me, it’s an opportunity to go out and challenge ourselves,” said Start about Friday’s showdown with GRCC. “You can either go out there and fold, or you can go show what you’re made of. With this group, we’re going to keep grinding and see what happens.”

In the offensive backfield, the Lakers have been getting strong performances form seniors and underclassmen.

During the win streak, sophomore running back Christian Folkert has emerged as their red zone king, scoring four touchdowns. In the same contests senior Steve Ready has rushed for 295 yards and two scores. 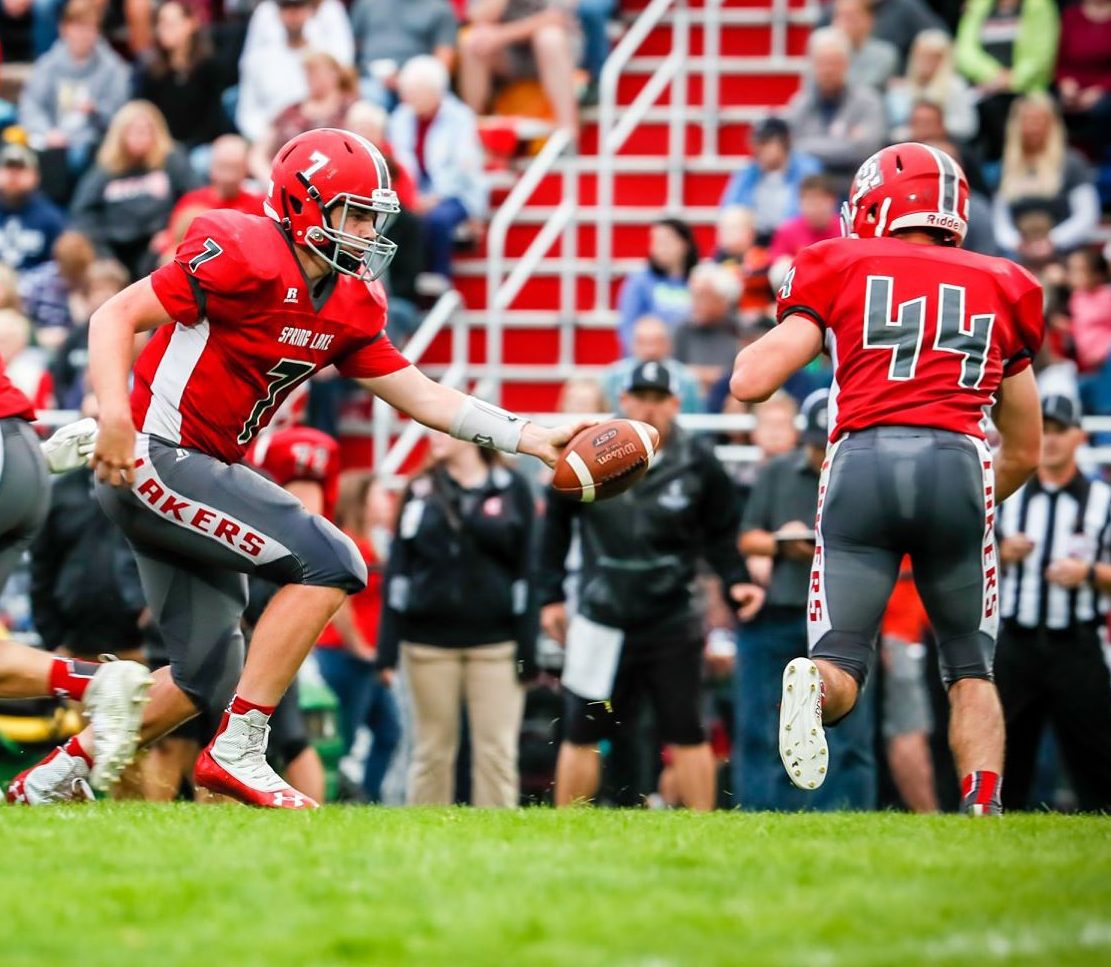 Spring Lake QB Zachary Keyser gets ready to hand the ball off to No. 44 Steve Ready. Photo/Tim Reilly

“Those two really compliment each other really well,” Start said. “Steve is extremely strong. Probably one of the strongest kids in the school. And Christian is like a missle. He’s borderline out of control. But his legs are always moving. He’s growing into that role as a big-time playmaker.”

Folkert, who moved to the Spring Lake district from Grand Haven in middle school, said the speed of the varsity level was the biggest adjustment he had to make. He played on the Lakers’ freshman team last season, since the school didn’t have a JV squad.

“It took a little bit to adjust,” he said. “But now we’re working a lot harder in practice, and the intensity level with all the guys is higher. We’re focused on closing the season strong and we’re going out there and playing our hearts out.”

Folkert said the biggest key to the Lakers’ strong rushing attack has been the play of the offensive line, which includes two sophomores, brothers Hunter and Travis Throop. Controlling the line of scrimmage has allowed numerous players to find the end zone in recent weeks, including Dayton Holmes, Zach Mitchell and Sam Sheridan.

Folkert said playing with Ready has been beneficial, because the senior shares tips on improving ball security, reading holes and when to make a cut.

The calming presence in the offensive huddle has been senior quarterback Zach Keyser, who also stands out on defense as a linebacker.

Keyser’s strong play on both sides of the ball was pivotal in the Lakers’ Week 3 overtime against Fruitport. He also had a touchdown pass last week against West Catholic and a pair of rushing scores against Comstock Park.

“We don’t ask him to pass a lot, but when he does, he makes all the right decisions,” Start said. “He’s just outstanding in running our offense, getting us lined up, making calls at the line of scrimmage. He’s making sure guys are shifting in motion. It’s like having a coach on the field.” 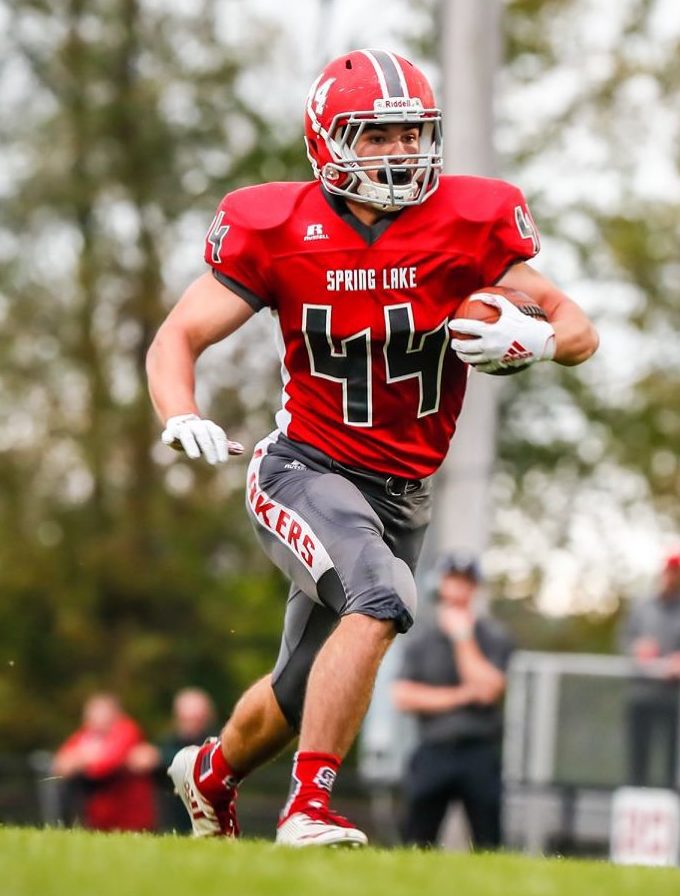 The Spring Lake football team has been on a hot streak, outscoring their last three opponents 111-0. Photo/Tim Reilly