NORTON SHORES – At the rate they’re developing, there’s a good chance that Drew and Reid Hackney

will get a fair amount of attention for their tennis skills as the years go by. 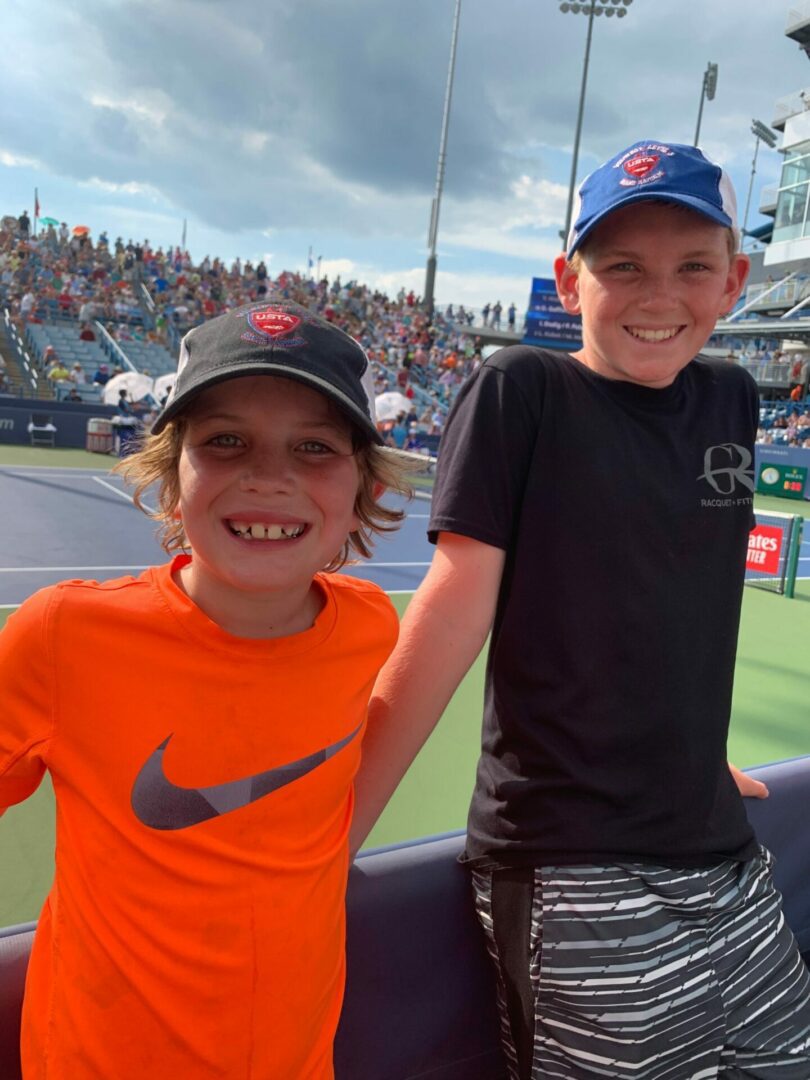 But they may never be as famous as they were last week, when a video of the two talented tennis-playing brothers from Norton Shores was posted by FOX Sports national broadcaster Joe Buck, and has been viewed over 200,000 times on the network’s Twitter and instagram accounts.

It all started when the boys’ mother, Traci Hackney, recorded a video of Drew, 13, and Reid, 9, playing a basement tennis game they created called MT (for Mini Tennis). They play it in a small room in their basement, using a special type of foam ball that has a bounce, but is too soft to cause much damage.

Traci tweeted the video, it was re-tweeted several times in the cyber tennis world, and eventually grabbed Buck’s attention.

Buck had recently put out a call for people to send in home sports videos during the COVID stay-at-home period, but he noticed the Hackney video on his own and asked if he could post it.

What made the video extra impressive is that the Hackney boys are very advanced junior tennis players. Both have competed regionally, won championships, and are ranked among the top amateurs in their age group in the Midwest.

Did the Hackney Family create a 5th major? I would love to see @rogerfederer take on @rafaelnadal on carpet. Great job boys and thank you @hackneytraci for sending this in. #Quarantennis #goodnight pic.twitter.com/VEMfqRwLwm 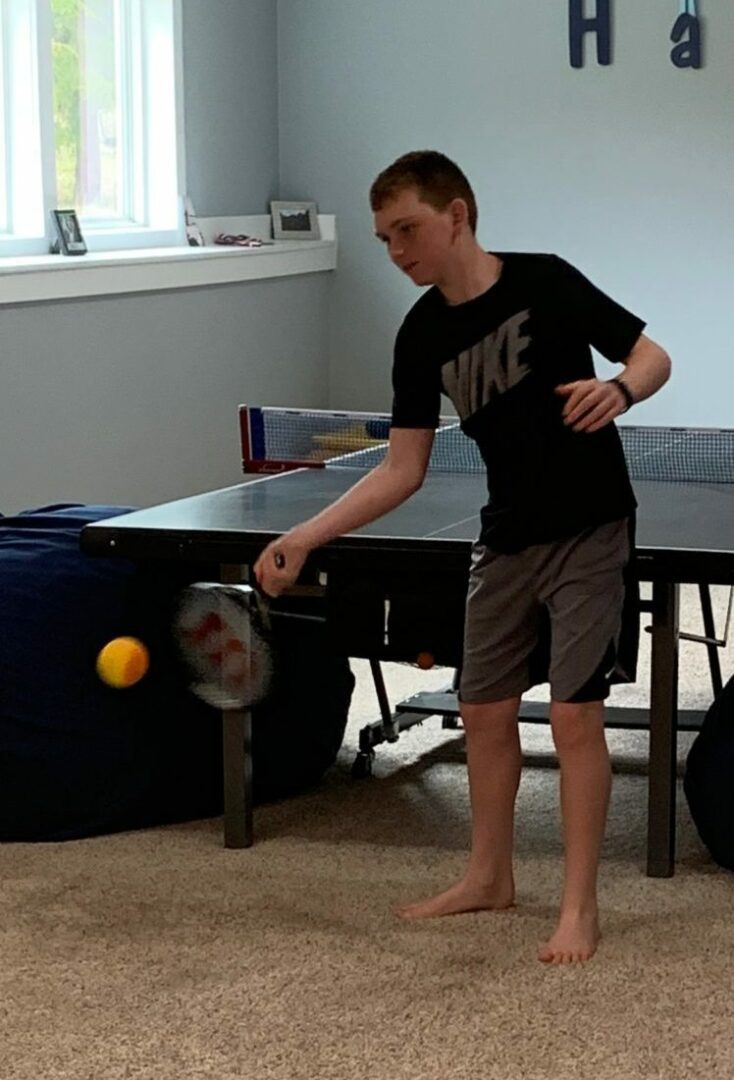 Drew Hackney makes a play on the ball during a mini tennis match in his basement.

“Traci said she got a message from Joe Buck, and I thought, hmm, that name sounded familiar,” said Charlie Hackney, Traci’s husband and the boys’ father. “He said (in the email), ‘Do you mind if we use that video,’ and I told Traci to tell him yes!

“Nothing happened for a day and a half. I thought maybe it wasn’t real. But then all of the sudden people started sharing it (the video) and there were Drew and Reid, on everyone’s screen.”

When the video was posted on the Fox site, it included a voiceover from Buck describing the play-by-play action. And there was plenty of action for Buck to describe, because the Hackney brothers had a great rally going, hitting the ball hard but keeping it in play for a long time.

Reid, the younger brother, finally won the point with a nice cross-court shot at the net, drawing the following commentary from Buck:

“It looks like the younger guy is holding his own at the far end of the court – now he’s moving toward the net – good night! Unbelievable, just a great point. That’s about as good as it gets during a quarantine. Way to go, Hackneys!”

The boys were surprised by their instant online fame. 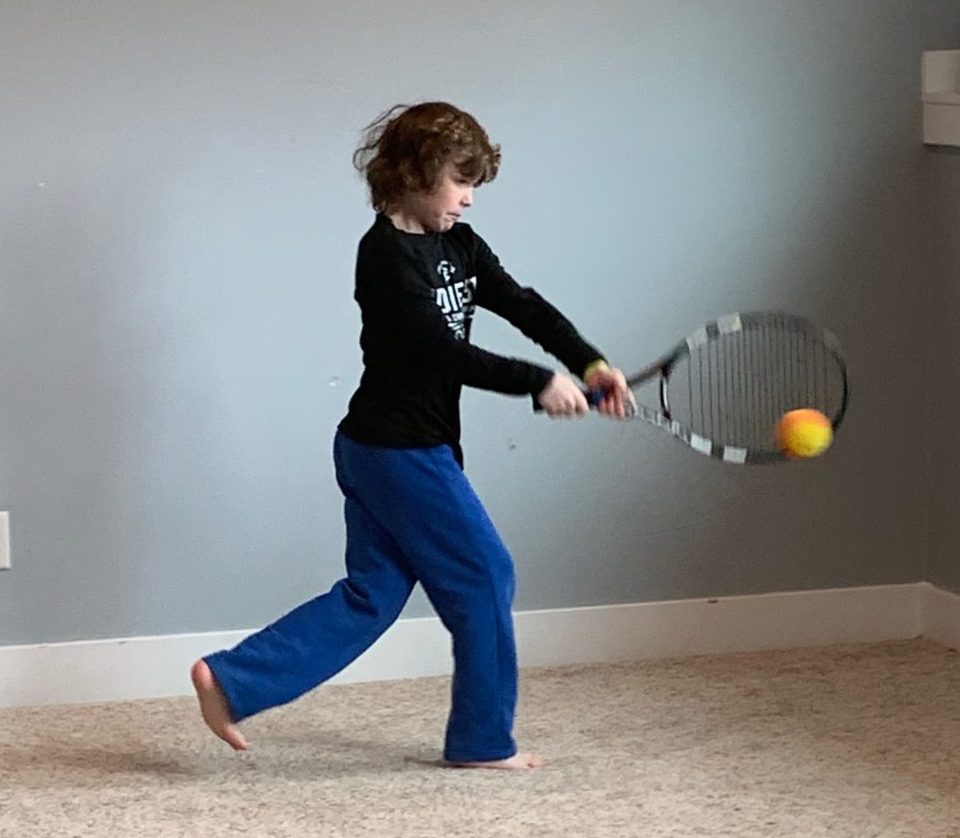 Reid Hackney gets ready to send a forehand shot back at his brother while playing MT (mini tennis) in the basement.

“It was just a fun video,” Reid said. “I can’t believe that many people actually looked at it. That video is what we do every day.”

“When we play anything tennis, it is all in, all the time,” Drew added.

Charlie Hackney said the action in the video was impressive, and Buck’s commentary was cool, but added that the sportscaster did not see just how competitive his sons can get.

“That was a pretty good point, but they do even better points when I watch them,” Charlie said. “That’s the tip of the ice berg. They love it, they’re down there all the time. It’s fun, but it’s intense. They usually get along, but once in a while one of them will come upstairs upset.

“They’ve been playing that game down there for two years. They play down there every day during the winter. It’s a foam ball with a special bounce. The balls are made for little kids who are just starting, but they work great for not breaking stuff inside, and for Drew and Reid to play hard.”

Drew and Reid became so good at tennis so early in life because they were born into it. 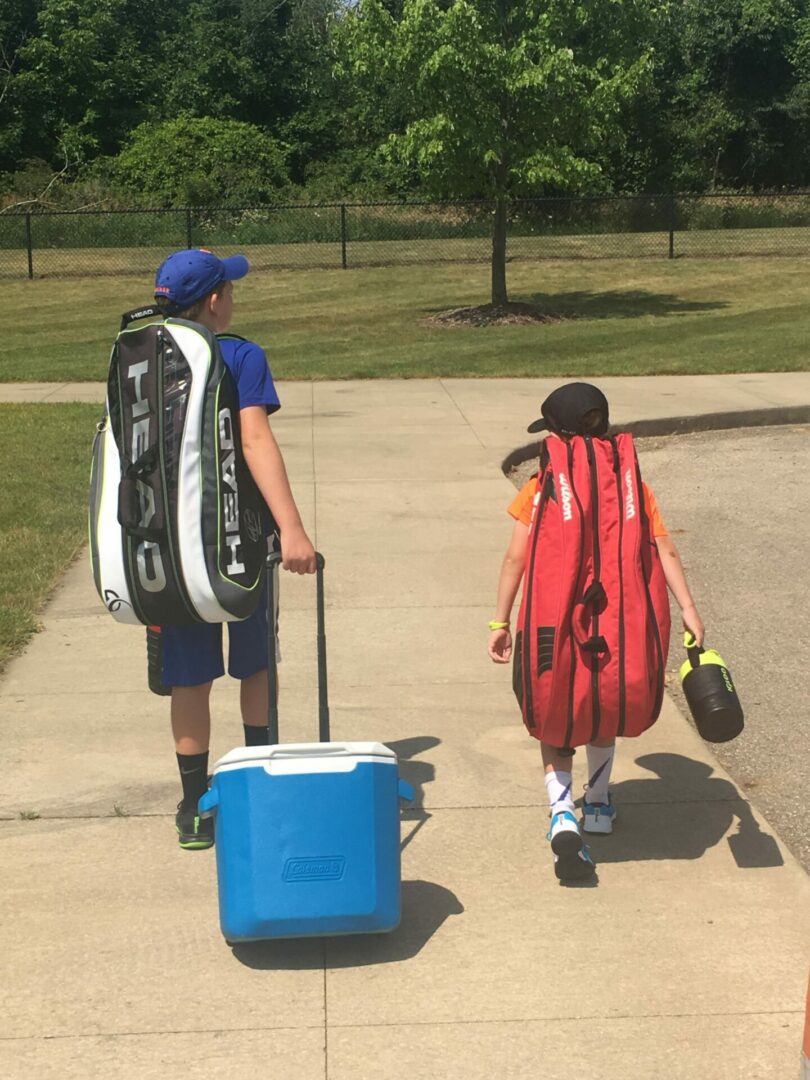 Drew (left) and Reid Hackney carry their tennis gear on their back enroute to the tennis court for a tournament day.

Neither parent competed at the college level, but they kept on playing for the love of the game.

“They just got sucked into tennis early on,” Charlie said. “My wife and I always play and they were just always out there with us. I think Drew started with a 19-inch racquet, and then it just grew from there.

“Luckily we have our court in the back yard for when they really want to play each other. I just lost a set to Drew tonight for the first time in the last three or four months. I wouldn’t say he’s better than me yet. But I might be on the way out here and be the old news. We just played for an hour and a half. I am all like sore and cramping up, and he isn’t tired. I’ll be sore tomorrow, I know that.”

To say that Drew and Reid are taking things to the next level is an understatement. They both travel with their parents a lot in the summer to play in various junior tournaments throughout the state and region.

Drew, who started playing at the age of four, is ranked 25th in the Midwest for players 14 and under. In 2018 he won an elite Midwest doubles tournament championship. 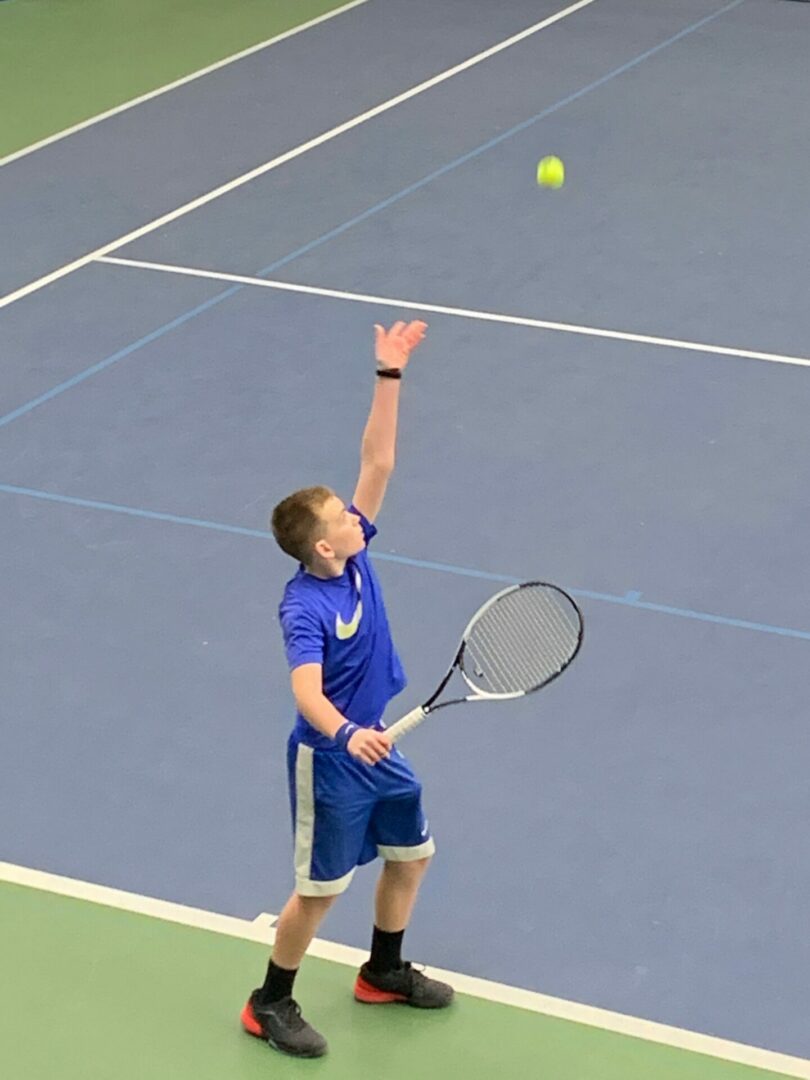 Drew Hackney tosses up the ball during a serve.

Reid, who started playing when he was three, is ranked in the top 100 in the Midwest for players 12 and under.

“He’s like one of the youngest,” Charlie said. “He’s got to be one of the highest ranked nine-year-olds in the Midwest.”

The Hackneys will soon have a new family tennis connection. Years ago, Traci used to coach boys and girls varsity tennis at Mona Shores High School, before she moved down to teach at the elementary level. This fall she’s going to teach at the high school again, and will coach the boy’s varsity tennis team, with Charlie serving as her assistant.

Drew will be a freshman at Mona Shores in the fall, so mom and dad will be coaching their son at the high school level.

But the player is apparently already better than one coach, and is close to surpassing the other.

“It’s took me a year or two after we got married for me to beat Traci,” Charlie said. “When we first got married, I couldn’t beat her. Drew just finally has been consistently beating her this year. He’s beating her every time now. He’s getting sets on me now. Two out of the last three times he’s beaten me a set. We are on the edge of me not knowing if I’m still better than him.

“A year from now, it’ll be so obvious. Once he realizes he can take me down, he’s going to get even more confident, and I won’t have that mental edge of being his dad. In tennis you can’t push each other around, it’s a mental edge.”

Reid may be only nine, but he’s pushing up the family depth chart quickly, and may be better than all of them by the time he reaches high school.

“Traci is holding the third place currently among the family tennis players,” Charlie said. “She cannot beat Drew or I. We think she can still beat Reid, but we’re not sure. I looked out and saw Reid hitting the other day, and Drew and I looked at each other and both agreed, we think mom might not be in 3rd place for very much longer”

Drew (left) and Reid Hackney work on their serves in the back yard. Both young players have earned Midwest Sportsmanship awards, an honor only given to two players each year. 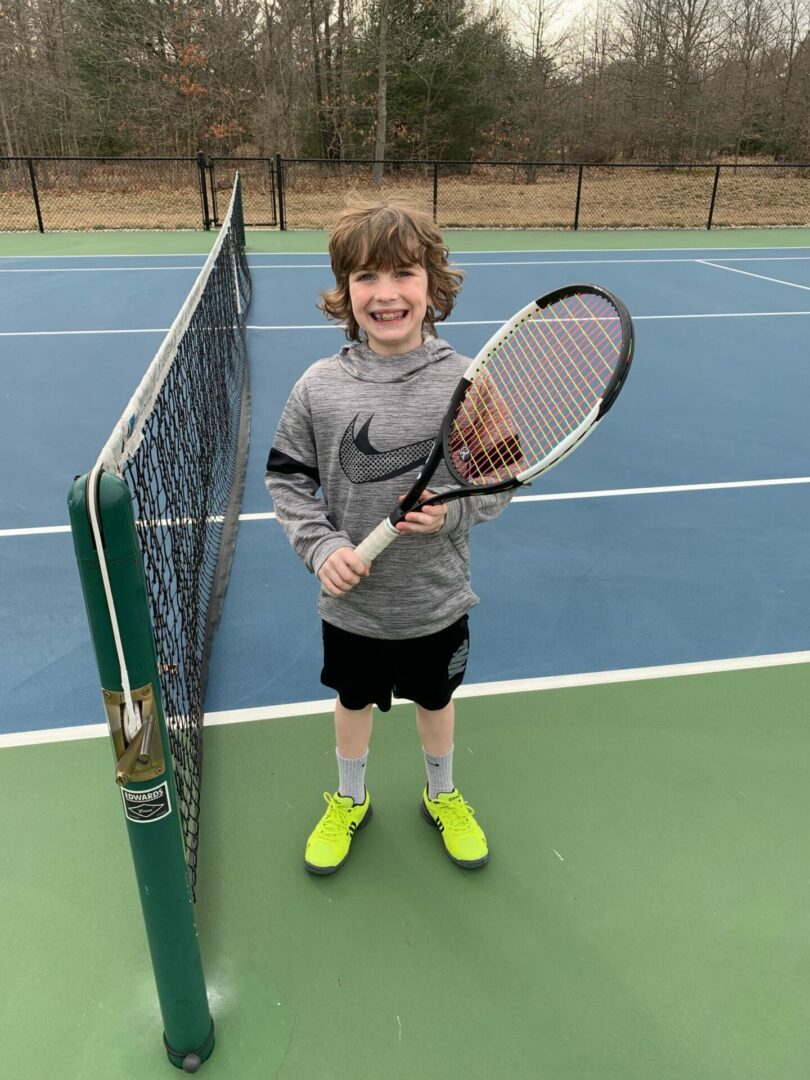 Reid Hackney stands on the court in his back yard. 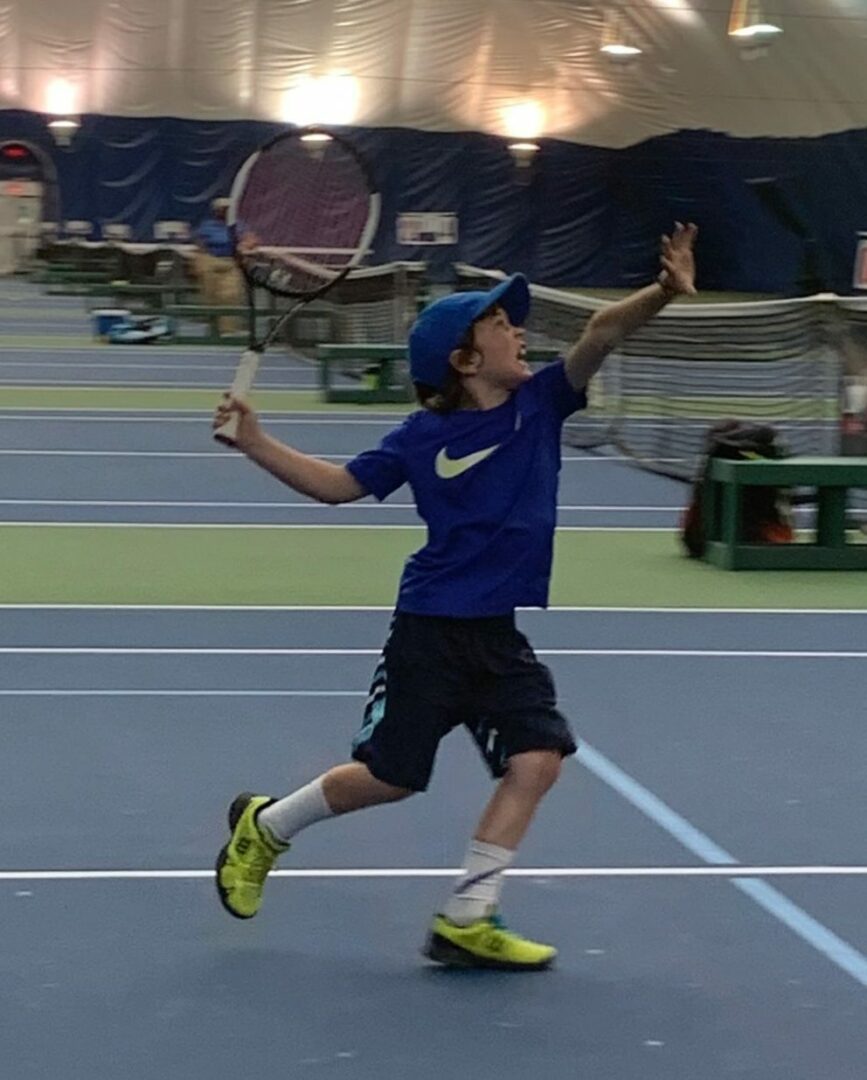 Reid Hackney approaches the net to slam home a point during a tennis tournament. 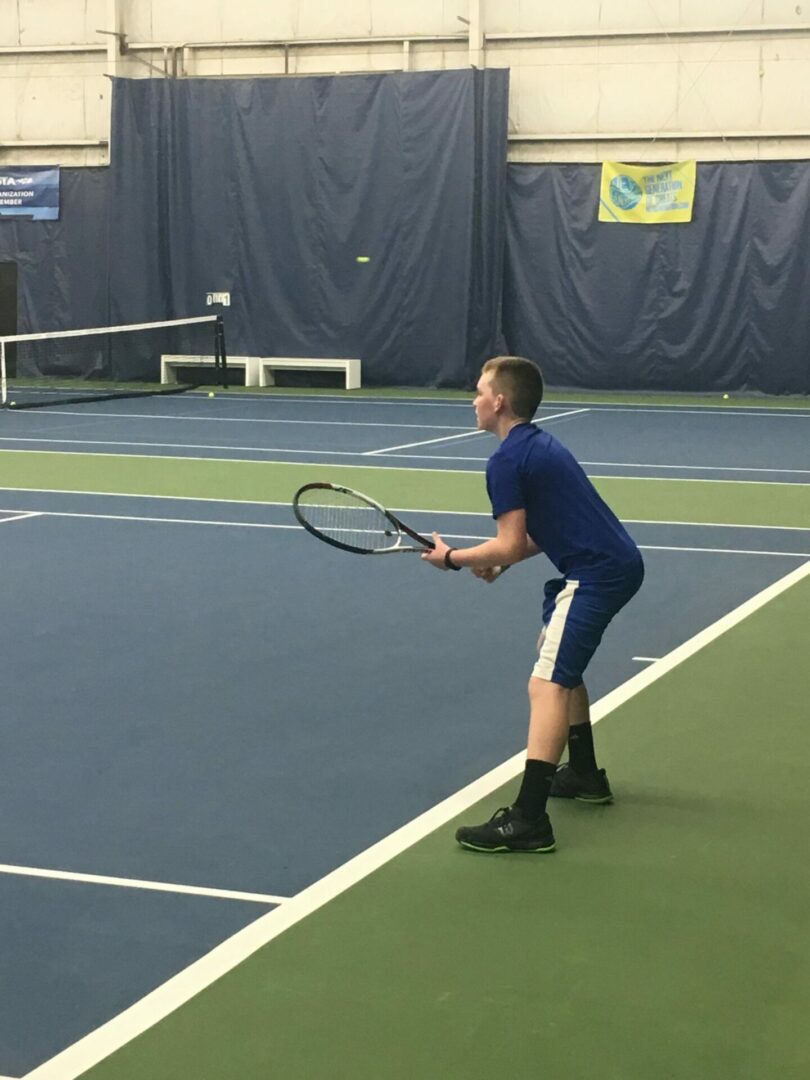 Drew Hackney, a soon to be 9th grader at Mona Shores High School, waits for a serve at the baseline. 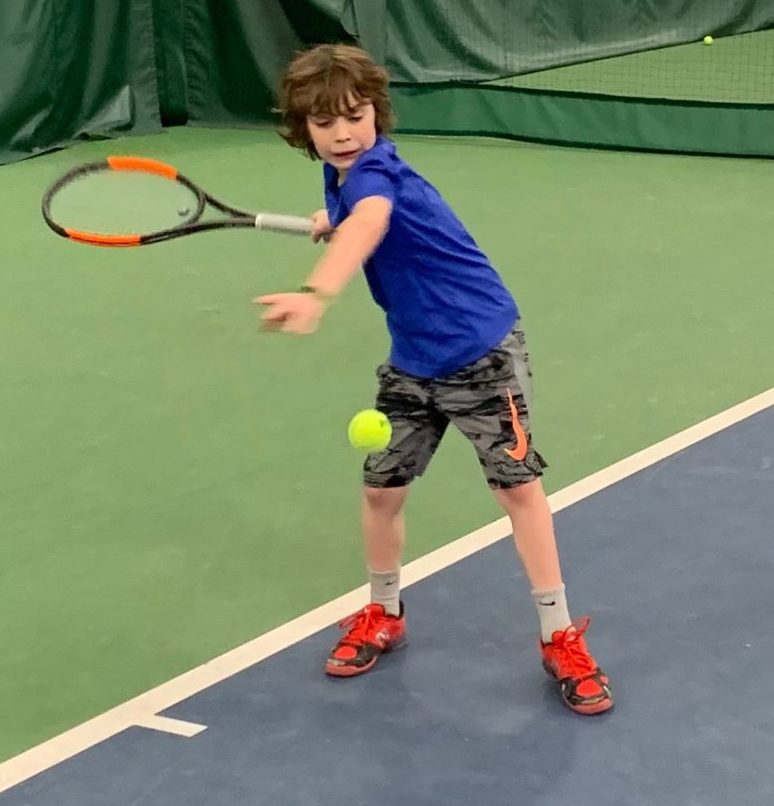 Nine-year old Reid Hackney gets ready to send a shot during warmups at Norton Pines. 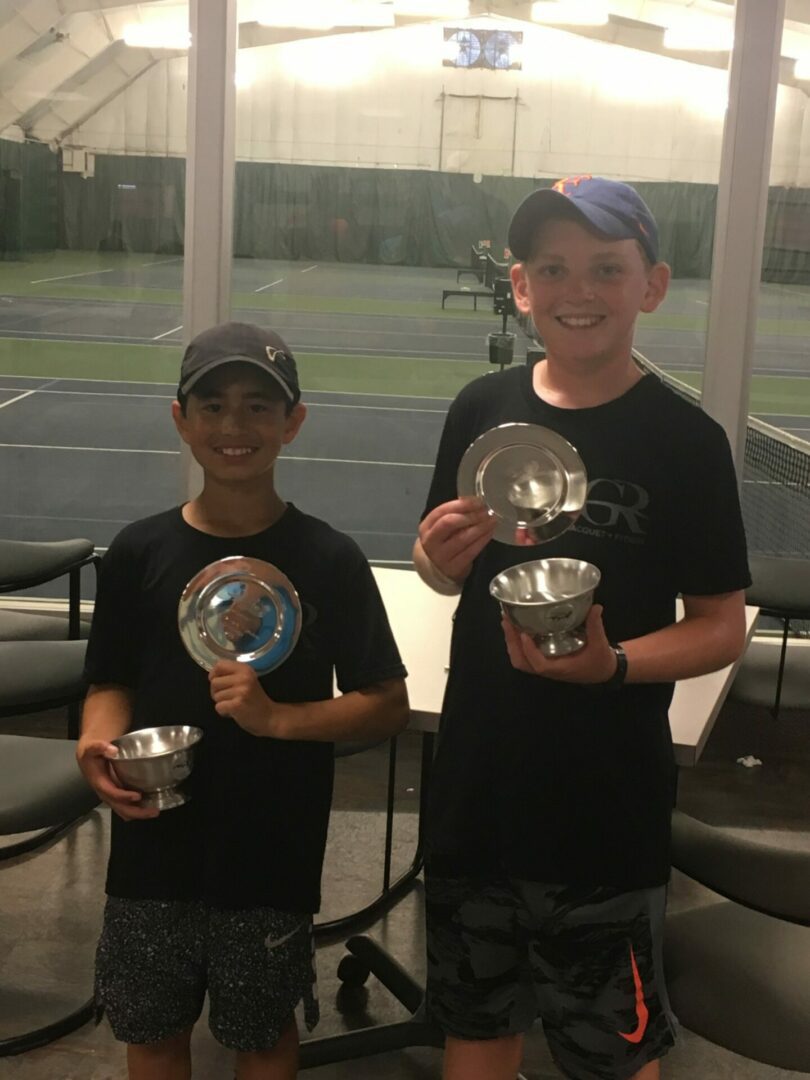 Drew Hackney (right) stands with his doubles partner after winning the Midwest Closed 12 and under doubles title. 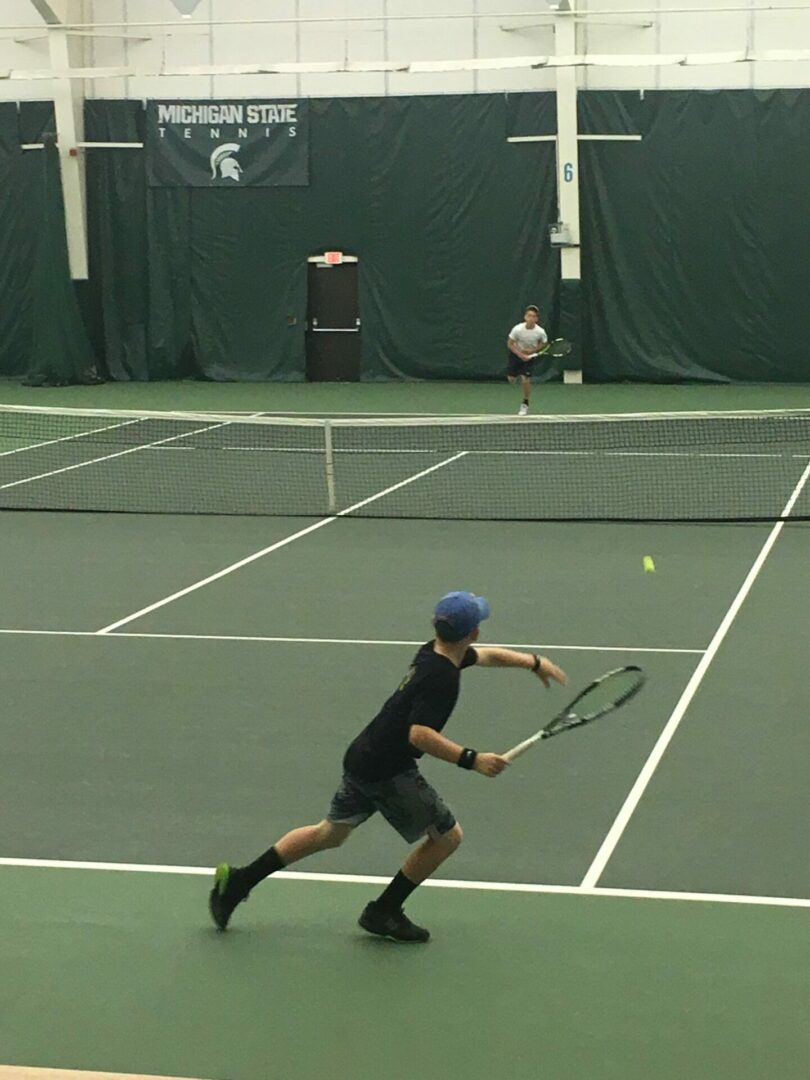 Drew Hackney (bottom) gets ready to return a serve during a recent tournament at Michigan State. 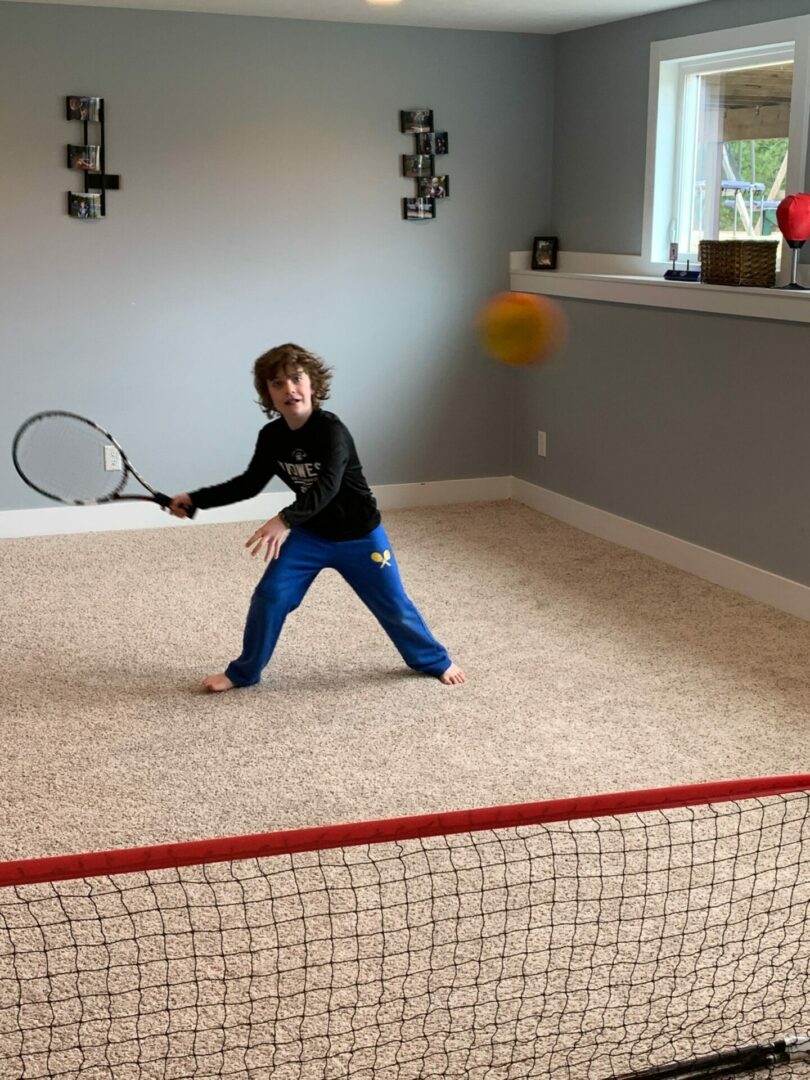 Reid Hackney works on his net game against his brother Drew. 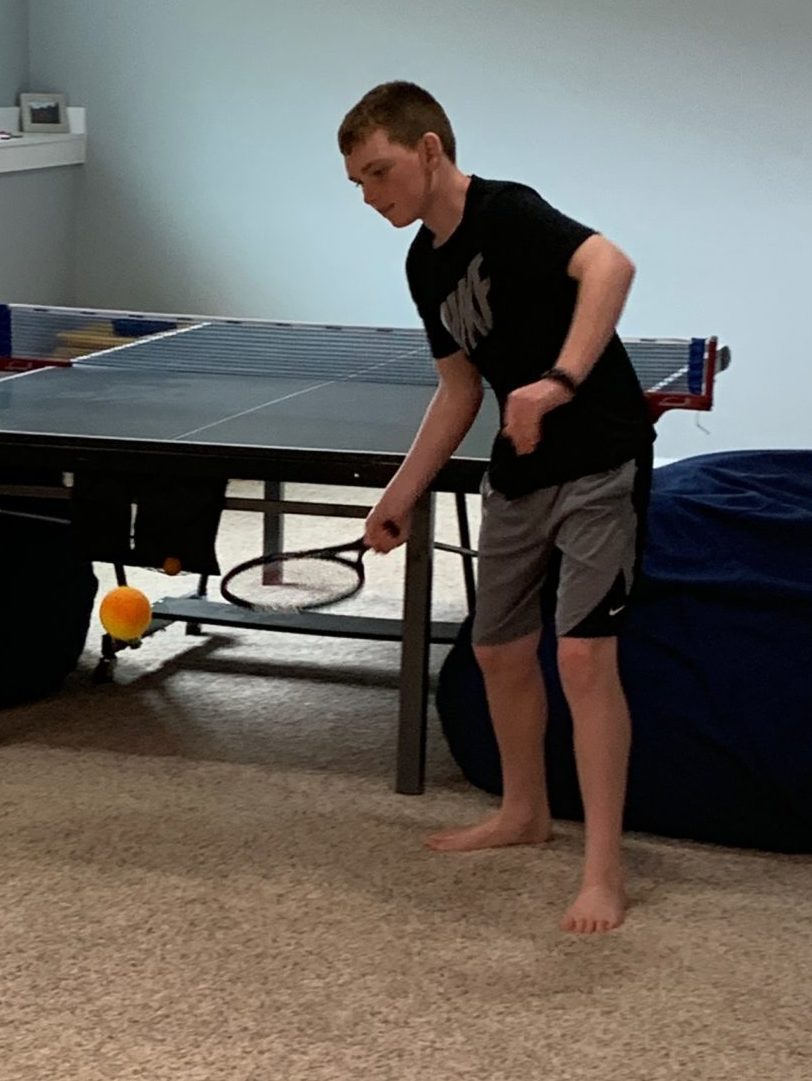 Playing a round in the basement, Drew Hackney gets ready to return a shot to his brother. 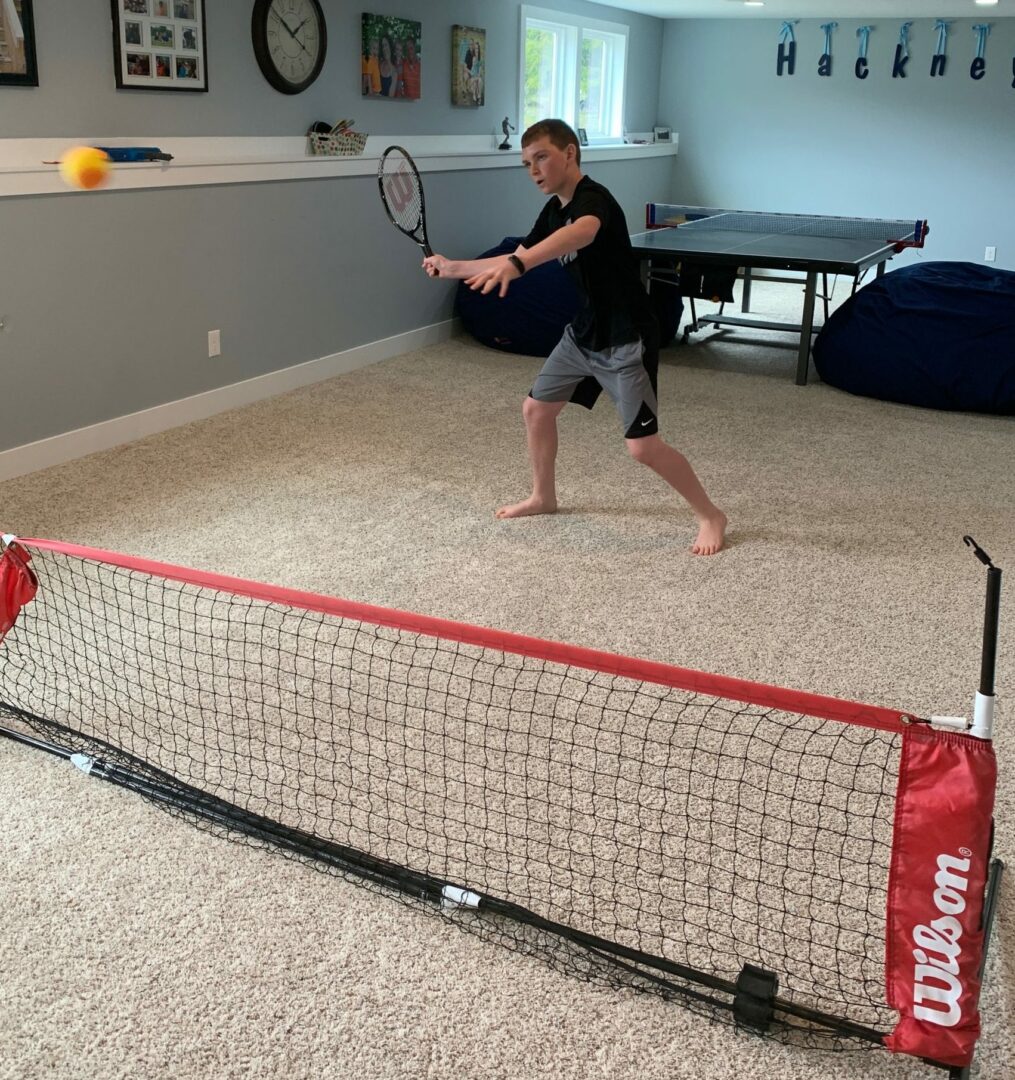 Approaching the net, Drew Hackney sends a shot back at his brother.