The Bulldogs had their share of talent coming back following a 15-7 campaign in 2018-19. But their head coach, Justin Johnson, resigned to coach at Mona Shores, nd they learned that two of their best players were going to miss the season, due to injuries incurred in football. 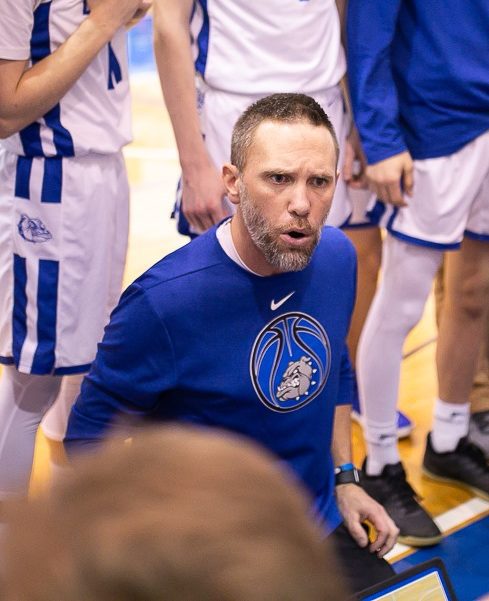 Ravenna Coach Courtney Kemp talks with his team during a time out. Photo/Randy Riksen

The new head coach faced the challenge of restoring the team’s confidence, and Courtney Kemp answered the call after serving for five years as the JV coach.

Kemp stepped in as a familiar reassuring presence, and helped the players understand that they could still be very good, even after the personnel losses. The team responded by posting the first 20-0 regular season in school history, winning its first outright West Michigan Conference championship since 1973, and finishing with a sparkling 21-1 record.

For leading the team to its historic season, Kemp is LocalSportsJournal.com’s Division 3-4 boys Coach of the Year.

“I had coached four of the guys who contributed a lot at the JV level,” Kemp said. “I got the chance to know them and grow with them. I knew what this team was capable of doing. We told them they just had to keep working hard and keep rolling, and that’s what the guys did.

“Defensively we changed quite a bit. We tried to capitalize on our length and ran more zone than we have in the past. Offensively we knew how talented we were, so we gave the guys more freedom.  Instead of X’s and O’s, we gave them direction and got out of their way.”

Kemp’s team not only won every regular season game, but won a lot of them by very big margins. Nine of the Bulldogs’ 20 victories were by at least 20 points.

Ravenna served notice that it would be a force to be reckoned with by rolling to easy victories in its first three games – 68-42 over Montague, 72-32 over Byron Center Zion Christian, and 59-29 over Whitehall.

The Bulldogs clinched the conference championship in convincing fashion on Feb. 18 with a 70-36 victory at Oakridge. They completed their perfect regular season with a 71-51 win over Fruitport Calvary Christian on March 3.

“We didn’t have any idea we could end up 20-0,” Kemp said. “I know it’s an old cliché, but we literally played one game at a time. The way we looked at it, we were 1-0 after every game.  It wasn’t until we neared the end of the season that we started to look at (an undefeated season). By game 17 it hit us.

“That speaks volumes about the character of the coaching staff and kids. They never strayed. They were humble, every last one of them. They didn’t feel the pressure, or look at it like they had to go undefeated. Their mentality, character and unselfishness were off the charts.”

There were a couple of key games along the way that stand out in Kemp’s mind. The first was a 58-48 victory over Holton on January 3, which gave the team a 5-0 record. The game was very close until the fourth quarter, and the coach said his players learned to never take any opponent for granted.

The second game that stands out for Kemp was a 54-52 nail-biter win on the road against North Muskegon on Feb. 13.

“That was a real test,” Kemp said. “That was a road game against a good team that was starting to play very good basketball, and one that traditionally we had not had very much success against. Our locker room after that game was electric. That was when we really started to reflect and say, hey, we’re pretty good. We can do this. We might be able to run the table.”

The perfection bubble burst in the Division 3 district semifinals, when Bulldogs came out flat against a good Kent City squad and lost 47-37, putting a stunning end to what had been a magical season.

“I think we’re still processing that game, and until we’re old men we’re still going to be processing it,” Kemp said. “It just showed that every single night to have to come prepared, because any team can beat any team. Kent City came out hungry and punched us in the nose, and we never really recovered. We’re going to be thinking about that one the rest of our lives.”

Eight players were selected for the Division 3-4 boys All-LSJ squad, in a vote of area coaches. They were Jacob May and Calvin Schullo of Ravenna, Owen Varnado and Kellen Mitchell of Western Michigan Christian, Jeffrey Carrier of Mason County Central, Eli Carlson of Kent City, Jared Dugener of Muskegon Catholic and Nathan Slowik of Holton. 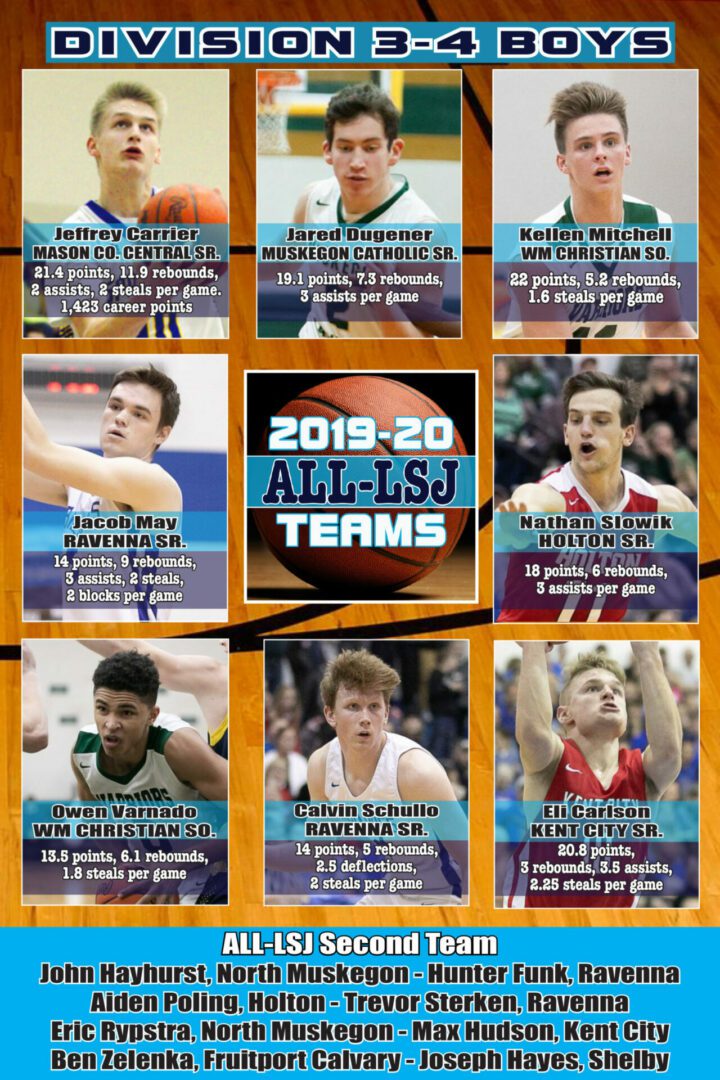